IT’S BOTH THE BEGINNING AND THE END 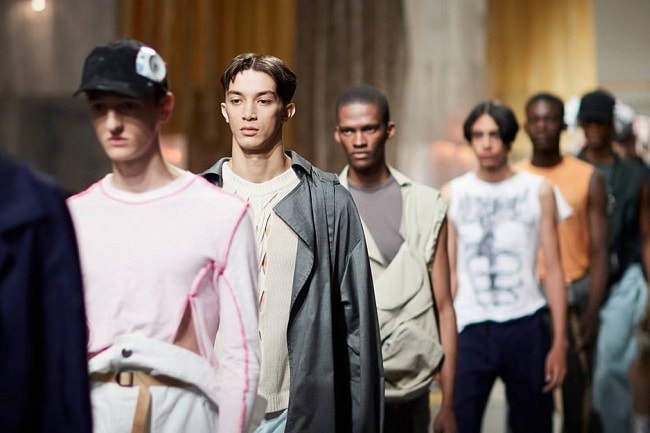 If the latest London Fashion Week Men’s could be summed up by one phrase, it’s this: 'It’s both the beginning and the end'. Previous recognisable staples – most notably, Craig Green and J.W. Anderson – have moved on, and as more Savile Row brands opt out, so goes the emphasis on tailored suits. At one point, menswear’s growing profile sparked the demand for a separate Fashion Week, and the trend has since spread. Yet, as more and more designers opt for blended presentations, many critics question the validity of this separation: Shouldn’t there just be one single LFW, focused on all collections?

Logically, yes. However, those presented from June 8th through the 11th point to the essentialness of this niche: Menswear needs a spot where it can still be innovative – and not just the also-ran to women’s ready-to-wear presentations. Through this lens, LFWM becomes both that petri dish of growing and semi-cultivated ideas, and a harbinger of both the most out-there and wearable menswear trends. Case in point: SS19’s laser-focus on the track suit, to the point that your tailored two-piece gets pushed to the side. With that in mind, get ready for boundary-pushing casualwear – not just sportswear pieces but plenty of camp collar shirts, bold knitwear, and bright prints on everything. Here’s a roundup from this year’s event: 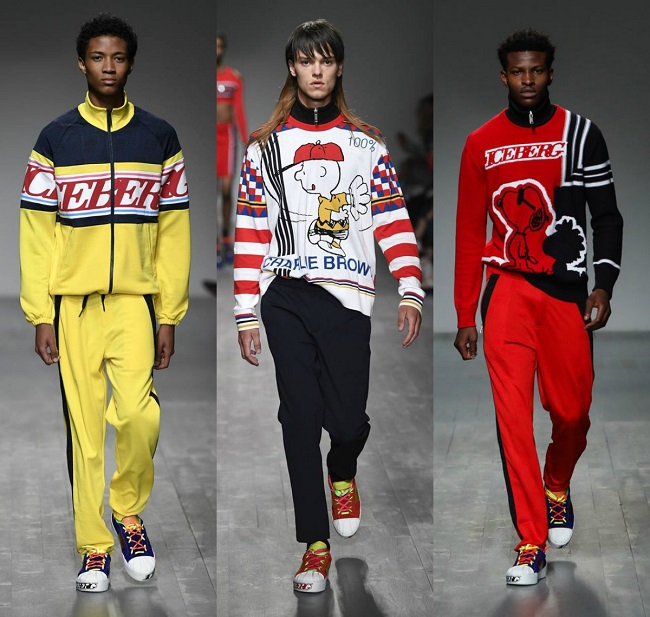 This Bulgarian designer deserves a category of his own. One of LFWM’s biggest highlights, Kostadinov gave us a unique, less on-the-nose take on post-Soviet-esque fashion. Gone are the iconography and Cyrillic lettering-infused, intentionally ill-fitting sportswear pieces. Instead, through one of the least-predictable amalgamations – allusions to an imaginary Bengal town on the Ganges, Satyajit Ray’s “The Apu Trilogy” films, and Jean Renoir’s “The River” – a coming-of-age theme emerges through sportswear spliced with construction worker silhouettes, oversized coats, dressed-up track pants, and plenty of subtly contrasting textures. While its overall concept resembled a young man playing haphazard dress-up with a bunch of adult-seeming pieces – a reference to current Millennial and Generation Z attitudes toward the symbols of traditional adulthood – Kostadinov nodded to his own heritage in the process. Bulgarian carpet scarves adorned many of the models, while military cotton Meshka bags also made an appearance. 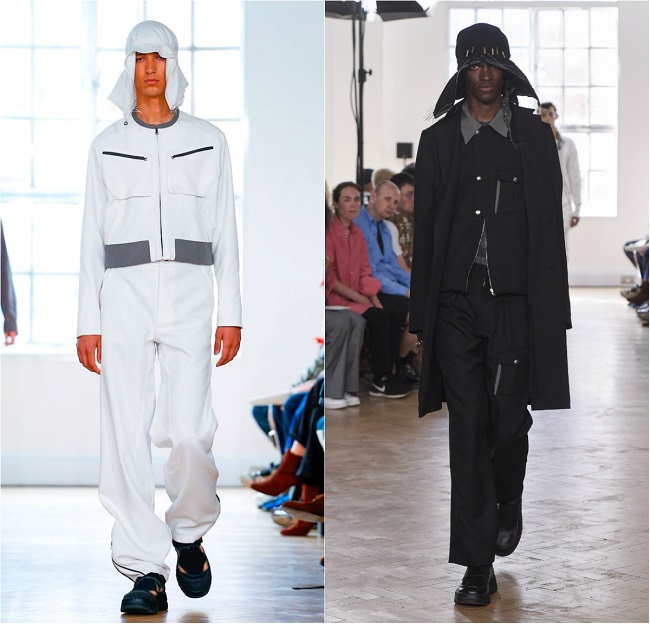 Degrees of Political Statements and Symbolism

Finalist for the 2018 LVMH Prize and Virgil Abloh protégé, Samuel Ross and his brand A-COLD-WALL* came with a bunch of hype in tow. But, Ross’ designs more than lived up to it. Reflecting Abloh’s minimalist-but-impactful concepts, A-COLD-WALL* used knitwear, panelled pieces, outerwear, deconstructed snowsuits, and a range of metallic and transparent materials to illustrate the UK’s social class-based world, social housing, and navigation of its social codes. Art School, presenting at MAN, avoided any hints and symbolism, instead opting for as direct of a reference as it could. Designed as a celebration of queerness, the collection took the lazy way out for androgynous fashion: Opting to dress male models in sequined dresses and tinsel wigs. Yet, where Art School floundered, Charles Jeffrey Loverboy appeared to be maturing. All that glitter and club kid references remain, albeit with restraint this time around. And, while the designer focused on similar LGBT themes, pain and protests received the greatest degree of emphasis through what could best be described as LFWM’s most eclectic and boundary-redefining assortment: sci-fi inspired sportswear, knits with overt gender-bending graphics, multi-print tailored suiting, and dresses more resembling sculptures than actual wearables. Throughout all of this, Jeffrey wove in his love of gaming and newfound interest in running. 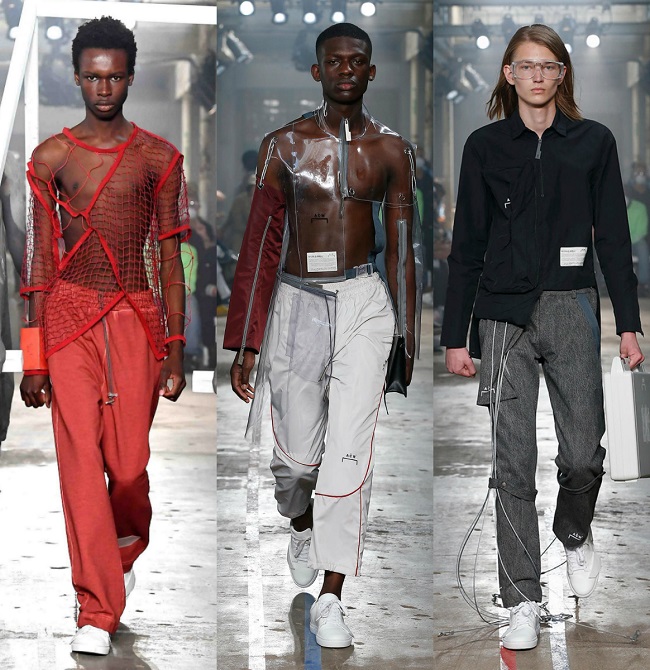 It’s All About the Music

Based on past presentations, Cottweiler and Liam Hodges went through the motions. The former, inspired by California and the designers’ recent travels across Asia and Australia, seemed to create the chillest rave possible, splashing psychedelic shades all over trainers, sportswear silhouettes, and spandex materials. Hodges’ adult-in-a-child-state whimsy remained just as present. This time, however, the designer swiped out colourful polka dots for oversized silhouettes, patchwork, Hawaiian shirts, and plenty of pattern layering. All of it translated to a just-raided-your-parents’-closet-before-a-rave vibe. MISBHV, too, played it safe, continuing a multi-season arc through rave culture. Although the androgynous silhouettes gave everything an informally unisex feeling, we’ve seen it all before, from the bucket hats, smiley faces, and neon yellow to the club flier prints. 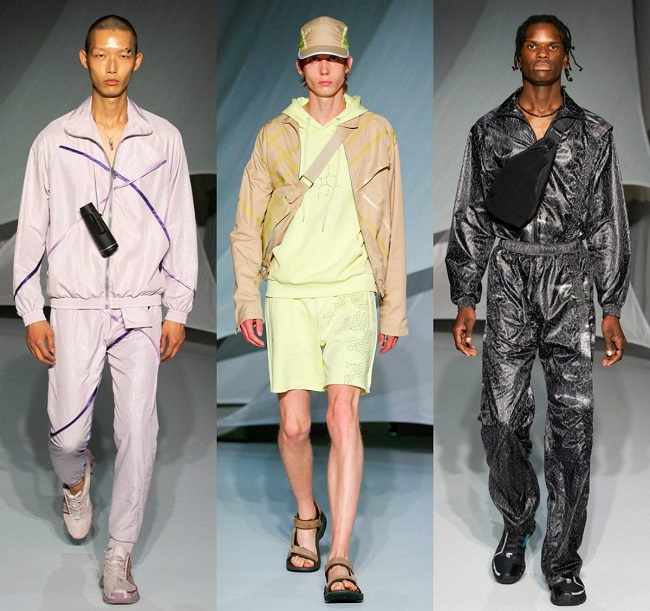 Less expected and even more casual, Martine Rose went through traditional Americana – lots of denim, flannel, and leather within the setting of a Southern cookout – to pen an ode to London. In the process, the dance clubs of her youth – those that would’ve played reggae, drum and bass, and garage and have mostly disappeared – received acknowledgement through transparent materials, bold patterns, animal print, and track suits. Going even farther back, John Lawrence Sullivan zeroed in on the Swiss punk movement and synthpop icons like Depeche Mode with his leather biker jackets, bright red tailored suits, and acid wash. Essentially, if you’re a fan of the Dave Gahan-fronted band, you’ll notice a full career arch illustrated through fashion: The years of 101 all the way through the latest Global Spirit Tour. 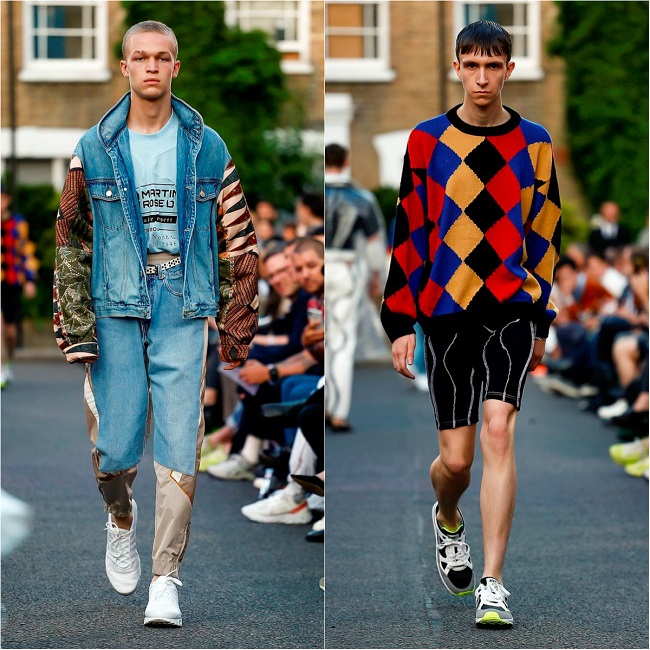 However, regardless of the era and the sounds, there’s always a reason to go out clubbing, and symbolising that period-less urge is Daniel W. Fletcher’s silk shirts, designed in light, shiny pinks and featuring rope-inspired graphics from a collaboration with Caitlin Keogh. The rest – skinny tailored pieces, halter tops, and trench coats - sits on plenty of ‘80s and ‘90s film allusions: The Lost Boys and The Matrix, depending upon how you look at it. In between what might be described as predictable and a left-field approach, Alex Mullins fleshed out his dedication to ‘90s raves over nine triptychs. Some influences emerged with the clarity of a bullhorn – neon shades, cropped shirts, and squiggly colour-blocked suits – and others introduced a “you had to be there” reference – see those Orient fish prints added over tailored silhouettes. 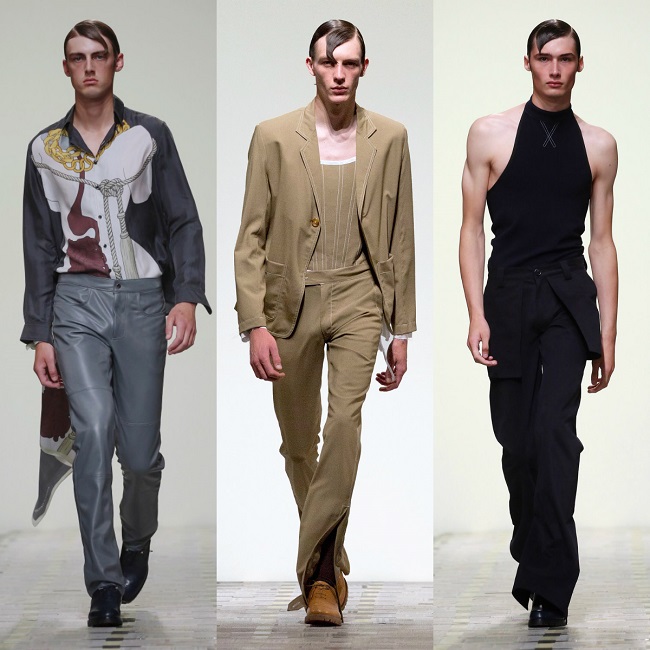 What has prevented menswear aficionados from taking gorpcore seriously? Perhaps it’s everything about it: Outdoor silhouettes awkwardly translated to streetwear, and tech features superfluous in the city. But, designers doggedly visit this trope, starting with Ben Sherman. The designer shifts more to the active than the outdoors – think anoraks, sweatshirts, and spandex shorts – but doesn’t mute the colours or settle for clunky shapes. Instead, these pieces interspersed with camp collar shirts, cropped trousers, and bombers all come together through a single, recurring theme: Colour-blocked Hawaiian prints on everything. If Sherman’s fun if not simple approach only dips into the water, Matthew Miller leans more on the “gorp” of this portmanteau. Reused, environmentally friendly construction remains a goal across the outdoor market, and here, Miller took old band merchandise – supposedly destined for a landfill – to fashion a collection of black and bright yellow “tailored streetwear.” For a purely practical approach, Christopher Raeburn pulled no punches. On one hand, the designer stuck with the staples – puffer jackets and anoraks, for instance – but cut everything as if it were sportswear and didn’t shy away from digital prints. And, as a move toward the long-standing outdoor consumer, Raeburn also showcased his recent capsule collection with Timberland. 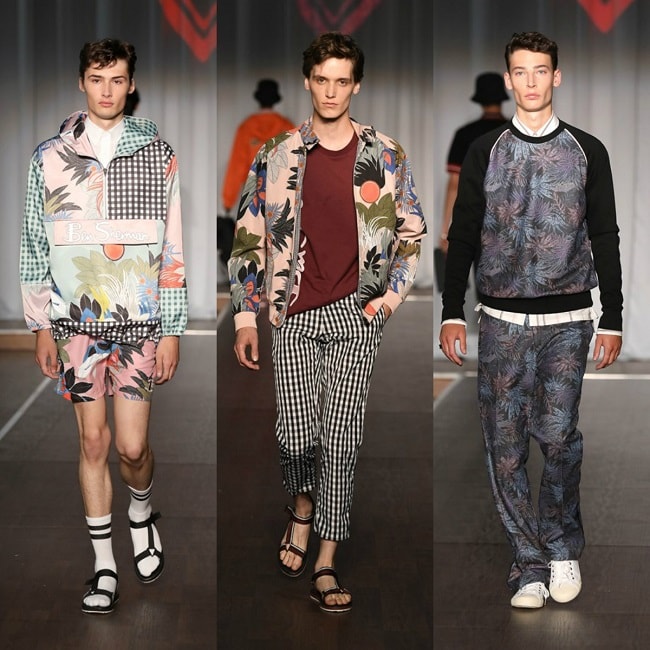 Attesting to LFWM’s status as a place to watch innovative menswear on the global stage, a handful of East Asian designers presented their collections this time around. Perhaps the most accessible, Chinese brand Pronounce aimed at the same sportswear-clubbing hybrid with lots of oversized, boxy shapes and layering. Diverging from expectations, though, models trotted out blazers that – in a Drag Race-esque fashion – turned into flowing capes halfway down the runway. Blindness – a South Korean label presenting at LFWM for the first time – circuitously approached androgyny and veered away from what could’ve been an uninspired K-Pop-influenced collection. Instead, for a true masculine-feminine fusion, long, boxy blazers sported puffy sleeves, tunic silhouettes extended shirts to the length of short dresses, and tulle ruffles gave everything an extravagant, ballgown-leaning finish. DanShan, already known as a unisex brand, travelled a couple decades back in time to what could’ve only existed at the tail end of the ‘90s: A Goth club with strong disco strains. In creating this setting, the designers utilised plenty of shiny synthetic materials, deconstructed both dresses and trench coat silhouettes, and added relaxed, wide-collar shirting into the mix. 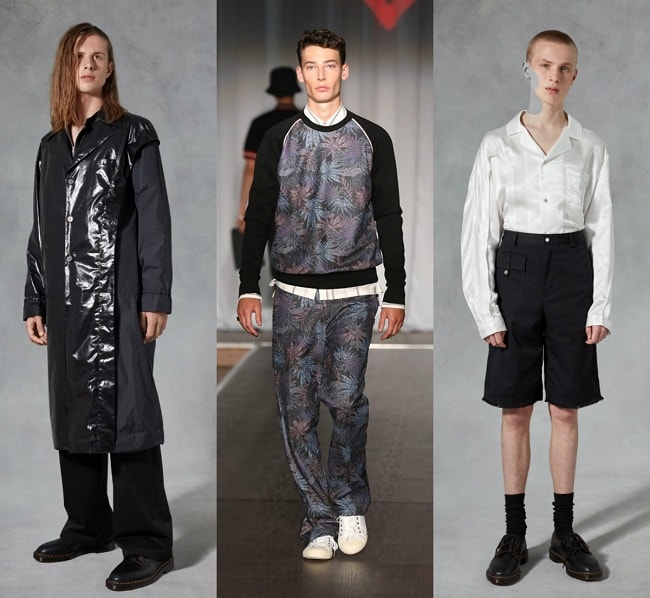 Amongst all of this, a few stalwarts returned, or in the case of Iceberg, presented at LFWM for the first time. The decades-standing brand, in the process of revamping its creative strategy, reverted back to its late ‘90s, early aughts period as a high-end, urban gear label, sticking to knits, hoodies, and tracksuits, all in bright, high-contrast shades. Topping it off, cartoon and racing motifs acknowledged the past and implied a rush forward. Lou Dalton emerged with similar youthful exuberance, away from the predictability of sportswear influences. Stating that we should all get ready for wider-cut shorts next year, Dalton avoided slimming anything down – except for her knits, which all seemed to take a finer gauge – and layered patterns upon patterns – acid wash, paint-splattering, and stripes for starters. If her oeuvre is any indication, we’ve all got master print mixing over the next 12 months. Whereas Dalton went all out, Phoebe English and Oliver Spencer both seemed to lay back on their laurels. English tread a similar sportswear-in-the-outdoors trail as plenty of other brands did, but did so through a monochrome lens, essentially breathing life into a somewhat tired streetwear trend. Spencer, too, literally relaxed with his approach. Dwarfed by many of the event’s other presentations, his collection stuck with organic cotton materials, clear woven textures, muted hues, and utility pieces – many referencing Britain’s textile innovations and once-status as a leading textile producer. 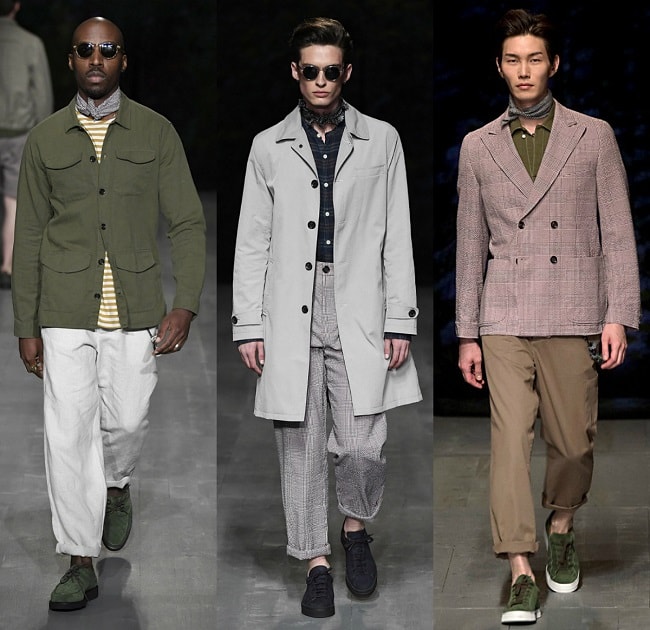