INTRODUCING THE GRAPHENE JACKET BY VOLLEBAK

THE FIRST STEP TOWARDS BIONIC CLOTHING THAT'S BULLETPROOF AND INTELLIGENT 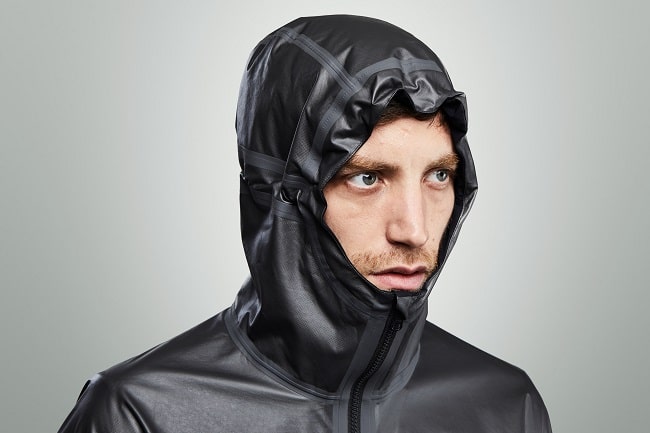 While it’s completely invisible and only a single atom thick, graphene is the lightest, strongest, most conductive material ever discovered, and has the same potential to change life on Earth as stone, bronze and iron once did. But it remains difficult to work with, extremely expensive to produce at scale, and lives mostly in pioneering research labs. So, following in the footsteps of the scientists who discovered it through their own highly speculative experiments, Vollebak are releasing graphene-coated jackets into the world as experimental prototypes. No-one knows the true limits of what graphene can do yet, but this brand sees this jacket as the first step towards their end goal of creating bionic clothing that is both bulletproof and intelligent.

Graphene is simply the thinnest possible layer of graphite, the stuff used to make pencils. While its existence was first theorised in the 1940s, it wasn’t until 2004 that two maverick scientists, Andre Geim and Konstantin Novoselov, were able to isolate and test it. Through highly speculative and unfunded experimentation known as their ‘Friday night experiments,’ they peeled layer after layer off a shaving of graphite using Scotch tape until they produced a sample of graphene just one atom thick. After similarly leftfield thinking won Geim the 2000 Ig Nobel prize for levitating frogs using magnets, the pair won the Nobel prize in 2010 for the isolation of graphene. 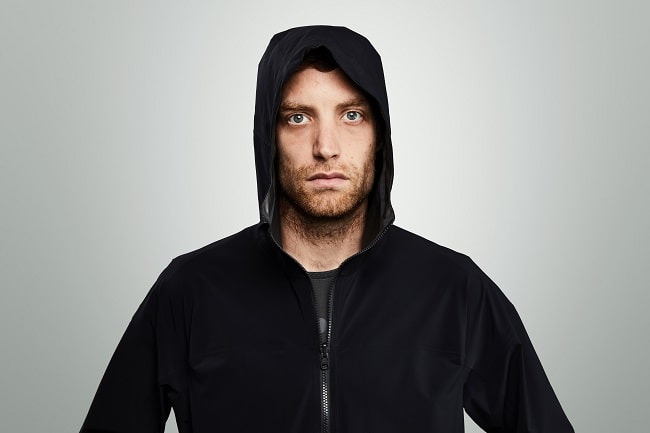 When graphite is reduced to a single layer of carbon atoms arranged in a hexagon formation, it turns into a supermaterial unlike anything ever known before – it’s so strong and so stretchy that the fibres of a spider web coated in graphene could catch a falling plane. With the potential to transform almost every industry from space travel to electronics, graphene is so mind-blowing that its discovery was described as like finding CERN’s Large Hadron Collider on your desk. Vollebak co-founder Steve Tidball says: “The original discovery of graphene came from an open-ended research project whose outcomes were impossible to predict, so we’re continuing in that vein. Knowing that the only thing that will ultimately limit what can be done with graphene is our collective imagination, the next logical step for us is getting graphene out into the hands of early adopters to see what happens.” 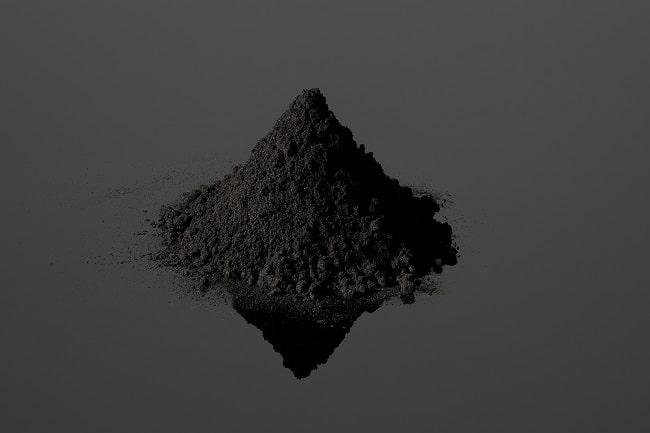 Over the last few years Vollebak have worked with production partners in Italy and Portugal to put the material and jacket together. It’s the same team that built Michael Phelps’ now infamous 2008 Beijing Olympics swimsuit that was later banned for being so fast. So, these guys have spent decades at the top of their field in terms of what can be invented, then built. The starting point was to turn raw graphite into graphene nanoplatelets. These small stacks of graphene were then blended with polyurethane and nylon to create an entirely new material that’s instantly stronger and can store and conduct heat, repel bacteria, conduct power, let sweat evaporate, and keep wind and rain out, but without adding a single gram of weight. 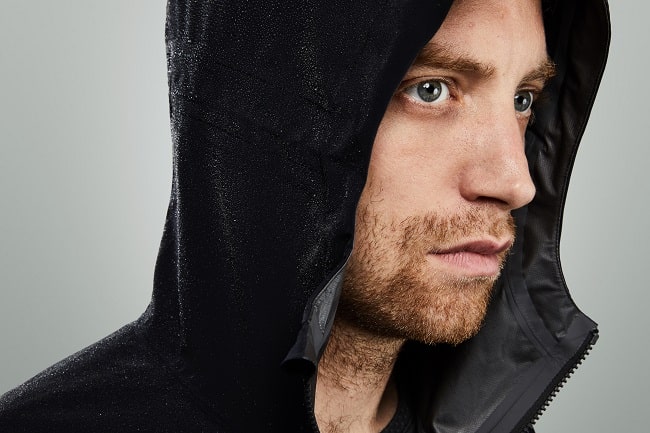 This first edition of the Graphene Jacket is a fully reversible jacket, with one side coated entirely in graphene and the other not. The graphene side looks gun metal grey. The non-graphene side is matt black and made from high-strength, high-stretch nylon. Depending on which way round you wear it and what you do in it, the jacket will interact with your body and the world around it in a series of different ways. As physicists at the Max Planck Institute discovered, graphene challenges the fundamental laws of heat conduction, which means your jacket will not only conduct the heat from your body around itself to equalise your skin temperature and increase it, but the jacket can also theoretically store an unlimited amount of heat, which means it can work like a radiator. 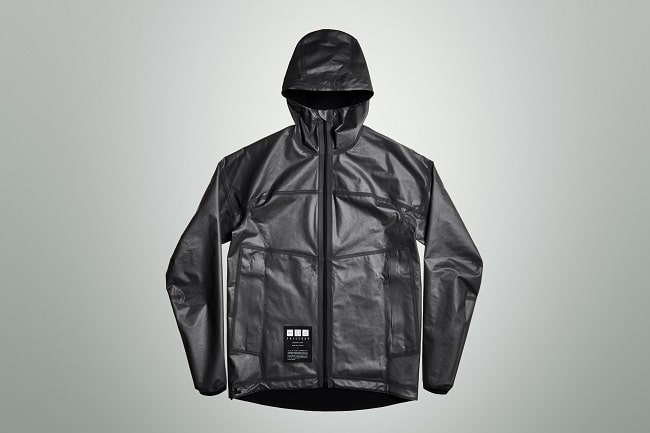 Steve Tidball says: “When clothing can start conducting heat and electricity, all sorts of cool things can start happening. It means that over the next decade your clothing can start to become a platform for other innovations. And that’s really what we’re interested in. Heating is not the end game. Our view is that wearable technology will become increasingly invisible over the next 10 to 20 years. Instead of wearing it over your eyes or on your wrist, it will be embedded as clothing and tech simply merge. We think graphene’s ability to conduct heat and power and withstand insane forces, while adding zero mass, will make it central to the story. By putting Graphene Jackets out into the world as experimental prototypes, our aim is to open up our R&D process and accelerate discovery by getting graphene out of the research labs and into the field. And we’re looking to harness the collective power of early adopters as a test group to do it. Together they’re some of the smartest and most hardcore guys in the world – adventurers, entrepreneurs, scientists – so we believe that between them they’re likely to discover things that we simply don’t know. It brings massive scale to our ability to experiment with the material to see how it behaves.” 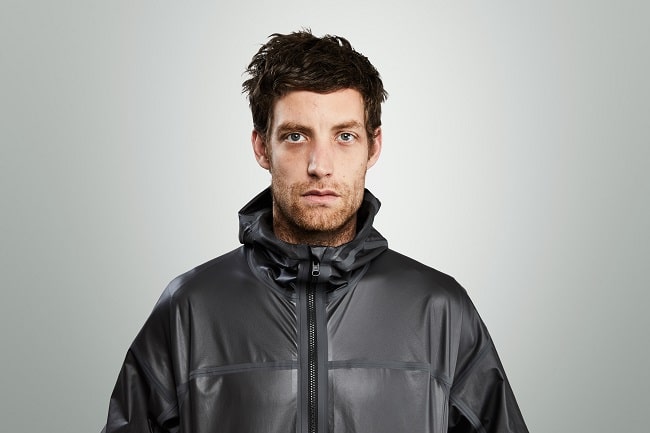 Vollebak co-founder Nick Tidball adds: “At the very start of this project we looked to the Apple 1 for inspiration. The fact it now looks like a 19th century artefact shows that all tech has to start somewhere. Another example we kept in mind when thinking about graphene’s future is silicon. While it was discovered by a Swedish chemist in 1824, it took nearly a century before silicon semiconductors paved the way for the rise of computers. In tech you can either be early or late. With a supermaterial like graphene the research and development phase may never be finished, and we could still be improving on this jacket in 10 or even 50 years’ time. So, we decided to be early.” 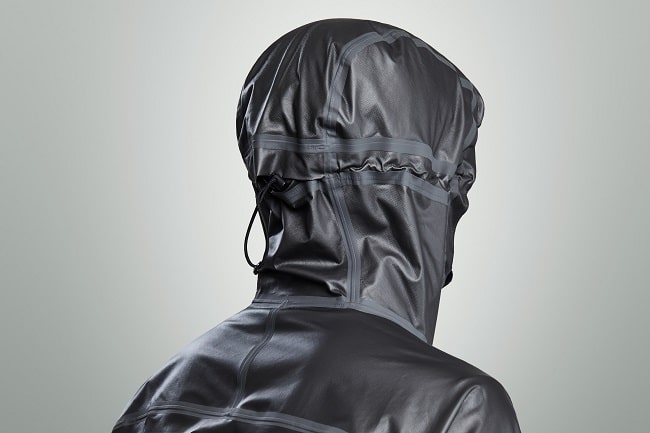