HOW THE ROW, CELINE & MADEWELL’S MENSWEAR MEASURES UP

THIS EVER-EXPANDING SECTOR CONTINUES TO SEE ITS PRESENCE GROW

Written by Ivan Yaskey in Brands on the 16th October 2018 / How The Row, Celine & Madewell’s Menswear Measures Up 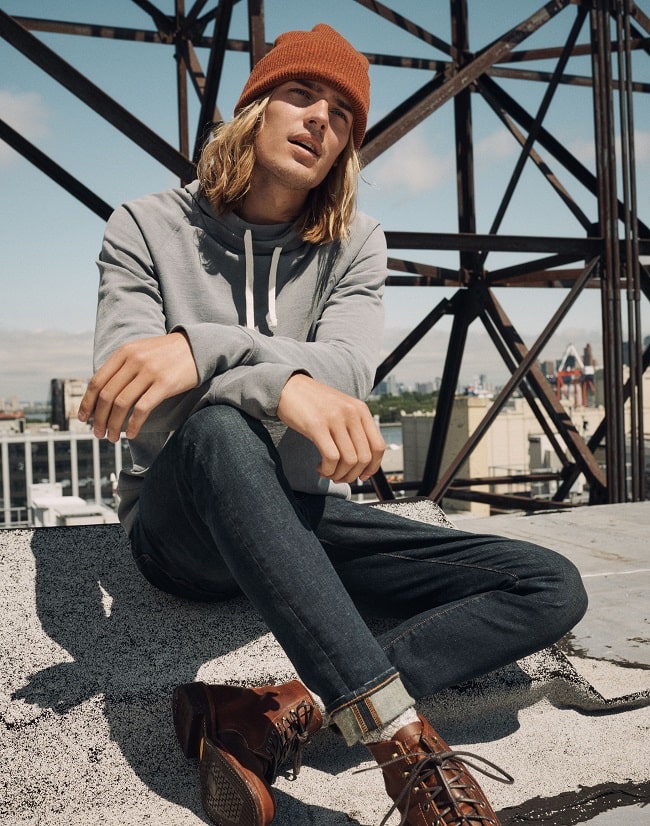 Even in 2018, menswear is money. Considered secondary, if not niche, in the fashion marketplace just until a decade ago, this ever-expanding sector has seen its presence grow. Womenswear brands, ranging from Coach and Stella McCartney to Forever 21, have taken note, and introduced their own fairly successful menswear lines. As of recent, The Row, Celine, and Madewell followed a similar path, and as their menswear offerings are unveiled, we examine how well they stack up against their womenswear counterparts.

The least celebrity line of all celebrity-helmed fashion brands, therow.com brought the tailoring you’d expect in a fine suit to jeans, leather leggings, and other casual essentials. Price tags, of course, reflected this level of craftsmanship, with basics easily running into the four figures. In short, if you could summarise The Row’s decade-plus run, it would be as expertly, meticulously designed wardrobe cornerstones for people with all the cash in the world to spend. Beyond its flattering, somewhat skimming silhouettes, however, the brand has gone around traditional feminine flourishes, creating something that’s fairly androgynous in appearance. As such, when The Row announced its plans over the summer to expand into menswear, the move felt like a very logical one. It further brought up the question, “Why didn’t they do it before?” The truth is, unless you’ve visited one of their brick-and-mortar stores in Los Angeles or New York, their previous, albeit brief, endeavors literally went under the radar. Not even a press release indicated they tried out a men’s collection in 2009 – one that solely consisted of reworked women’s pieces. Their second effort – and one that led up to their upcoming oeuvre – simply included a small capsule collection in 2016, meant strictly for customer feedback. 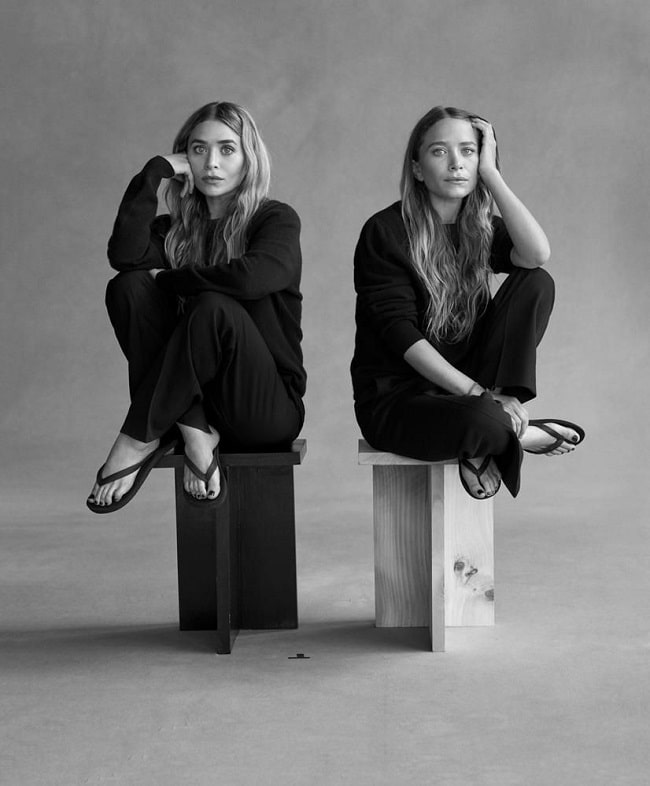 In response, although the full collection has yet to be released, the same fastidiousness that brought about The Row in the first place will shape the men’s collection. Glimpses, in black and white at odd angles or from a handful of lookbook shots, reveal precise, pristine suiting cut in a more European fashion, and shirting to match. Through press statements, New York’s minimal, masculine style of the ‘80s and ‘90s – perhaps that’s Wall Street polish crossed with The Village’s bohemian character – will emerge from made-to-order suiting from Japan, European-constructed tees and knitwear, and American-made tees and denim. Designs, so far, will veer toward slim: single-breasted jackets cut without vents, straight-but-slim trousers with a higher waist, and uniform influences. With shirts, meanwhile, a classic silhouette sets the stage for Sea Island cotton and mother-of-pearl buttons. As with the women’s line, neutral hues – nothing more boundary pushing than plum and mauve – hammer home the investment piece angle. And, perhaps, that description’s fairly fitting. The brand takes its name from Savile Row, reflecting, both conceptually and design wise, the amount of planning and particularity going into each and every garment. But, will The Row’s collection truly rival something you’d get off Savile Row, or seem like an overpriced knockoff? With the official drop planned for late October, we still have to wait and see. 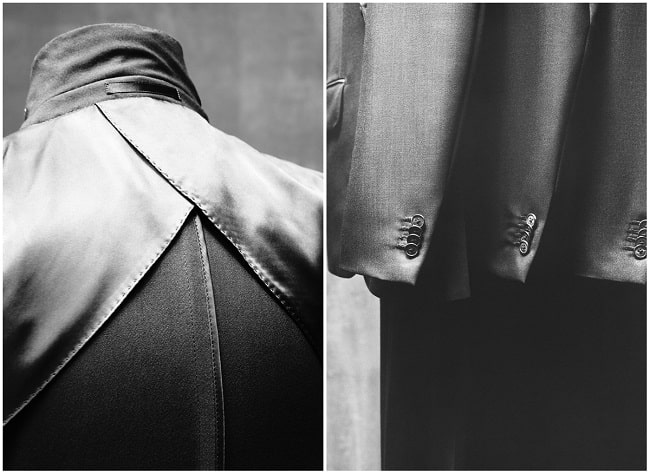 Hedi Slimane’s appointment to celine.com brought up the question, “Does a designer define a brand, or does a brand’s legacy supersede all that?” The answer, on the other hand, isn’t as direct. As we saw with Virgil Abloh at Louis Vuitton, it occasionally seems like a hybrid between personal definition and brand history. With others, like Riccardo Tisci’s tenure at Givenchy and new collection at Burberry, the designer shapes the brand’s direction. So, where does Slimane fall? More toward the latter, except Celine’s SS19 collection isn’t so much a new direction. Rather, Slimane’s Paris Fashion Week presentation unveiled an entirely new brand, with little connection to what preceded it. The womenswear end, under Phoebe Philo, very seldom became mired in trends. Rather, its neutral hues and timeless, less girly silhouettes spoke to the sophisticated woman expecting to wear a piece beyond a single season. In fact, for this reason, Celine’s androgynous-leaning fare built up a reputation among men. Much like The Row’s approach, a ready-to-wear men’s line seemed like a natural step forward. But, its unveiling coincides with Slimane’s total upheaval, and thus, the menswear collection doesn’t fully feel like an extension of Celine. Instead, it’s simply Slimane doing what he does best, essentially giving us an upgraded, more luxurious version of his Yves Saint Laurent designs. But, based on the SS19 presentation, Slimane has clearly drawn a line between men’s and women’s styles. The latter, reminiscent of a thrift store prom in the ‘90s, pulls together glimmering metallic fabrics, poufy silhouettes, and ultra-short hems, with emerald, gold, and polka dots pouring on the retro factor. Perhaps you’d wear it out to a club, if you have the money, or it’s an edgy red carpet look for a young starlet that’s just discovered and decided to flaunt her sexuality. In short, Slimane’s version of Celine is for the teen girl in us all that’s far too sophisticated (and much too rich) to find herself at Forever 21. 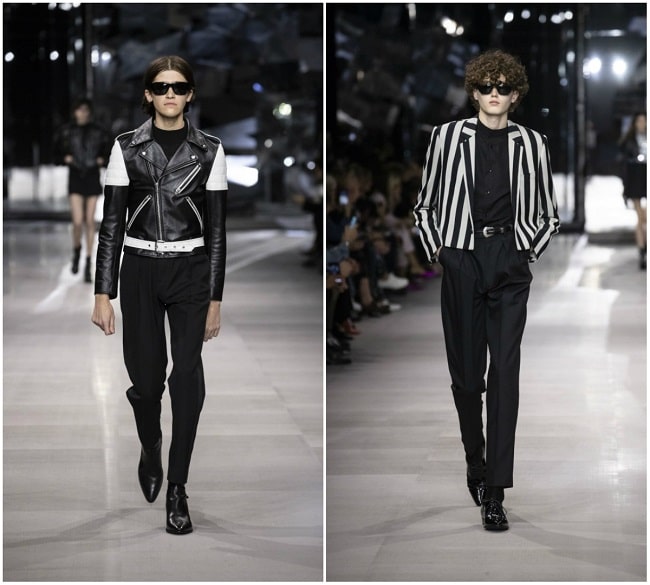 Menswear, on the other hand, is a different story – concept, direction, and design wise. The rock ‘n’ roll character from Slimane’s YSL days hasn’t left, but it’s less punk and more like The Strokes, circa the early ‘00s, crossed with a New Wave band. Ultra-skinny tailoring, for an equally waif-like silhouette, and lots of black pervaded the entire presentation, with the occasional metallic material or pattern giving it a curated quality. Slimane’s focus turned toward suiting and cropped leather jackets, with skinny ties and two-tone vertical stripes seemingly taken from an ‘80s music video. Yet, beyond the individual ensembles, Slimane’s menswear, assuming you have the figure and cash for it, could still work in an everyday context. Take out the skinny tie, and you’ve got a party suit. Leather jackets, accented by hardware, reflect current moto-influenced trends. And, metallic shades and prints don’t come with the same adventurous connotations they once did. Slimane’s more youthful direction doesn’t exist in a vacuum, however. With his appointment, the brand indicated they plan to do clothing drops – basically, what Supreme and other streetwear brands have done for years – rather than release a formal, full collection. 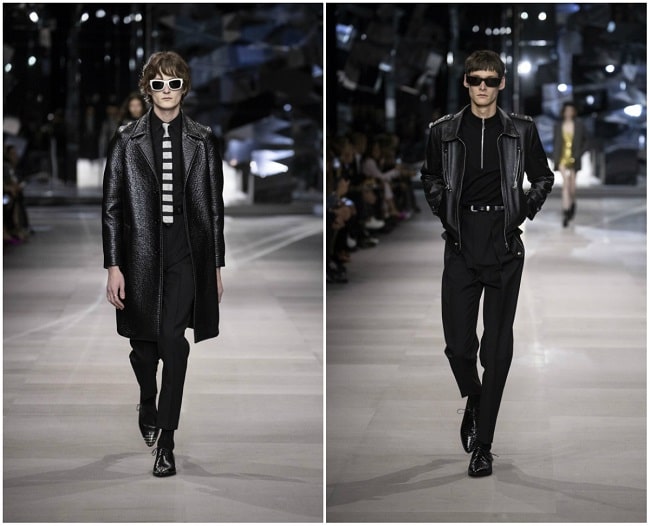 What started as a casual spinoff of J.Crew, based (at least name wise) on a defunct American workwear brand now props up its parent company. As J.Crew’s women’s end gets associated with unexceptional, basic clothing for the white-collar professional, madewell.com, meanwhile, is the fun, occasionally flirty side, geared toward the uncomplicated girl. You know her: Someone who sticks to minimal makeup, and would rather spend her days in comfortable yet well-fitting jeans and tees, instead of heels and a skirt. This blend manifests through Madewell’s offerings, spanning denim for a range of body types to drapey tops, peasant blouses, athleisure pieces, flowy dresses, and even pajamas, all in neutral shades, with the occasional pop of red or yellow. So, considering both of these angles, why did it take so long for Madewell to try out menswear? While there’s no definite answer, the company’s positioning itself as a billion-dollar denim brand, and menswear simply fits into this vision. As well, considering J.Crew’s more preppy, higher-end offerings, Madewell creates a similar contrast, geared toward the guy wanting to chill in better-constructed basics. 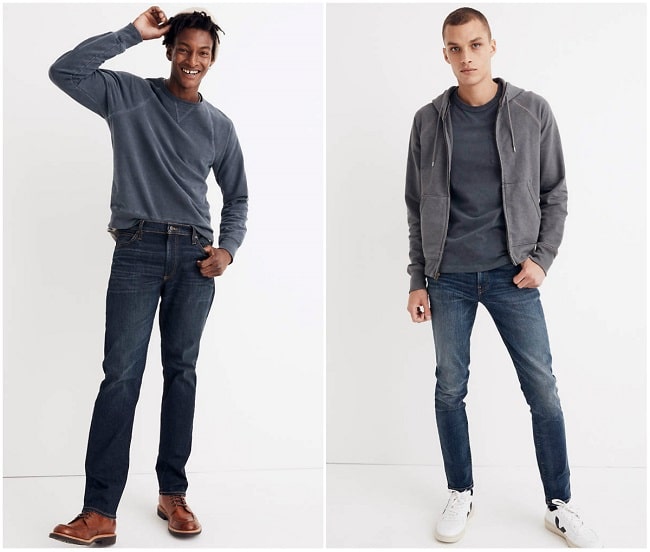 As well, there’s a third – and key – angle to consider: Madewell started in the 1930s as a traditional workwear brand, but faded out after a few decades. While J.Crew revived its namesake, the vision drastically diverged from the original. Madewell’s men’s collection, meanwhile, literally goes back to the brand’s roots, not only influenced by but further borrowing from its original silhouettes. Yet, it’s not a knockoff of Carhartt WIP or any similarly styled streetwear brand. Rather, in line with the women’s fare, this simple, starter collection sticks to the essentials: Skinny, slim, and straight denim in medium to dark washes, with just a hint of stretch, classic crewneck tees, Champion-esque pullovers and hoodies. Unless you work in an ultra-casual office, it’s not something you’d wear on the job, but rather, it’s for those days off when you’re looking for the right blend of laidback, sharp, and moderately trendy. 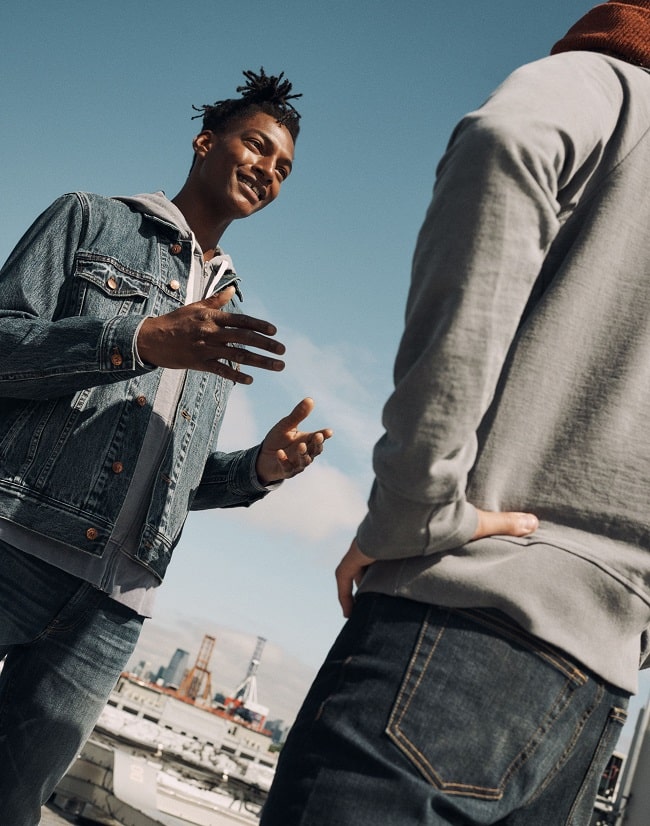