IN CONVERSATION WITH DAVE LITTLE OF ROCKERS DELIGHT 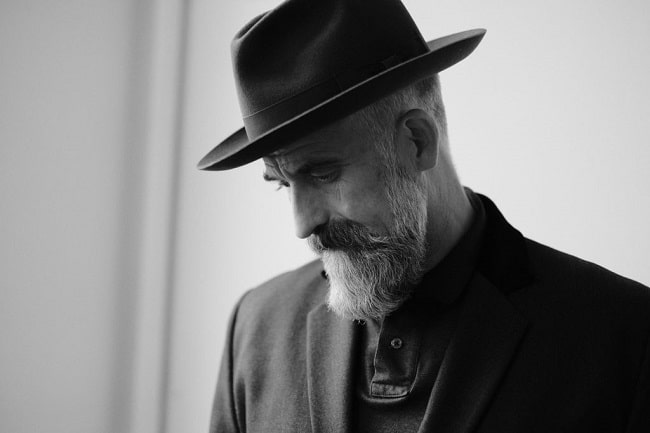 MenswearStyle were recently invited to preview the debut collection from London-based brand, Rockers Delight. The sole designer and owner of this new label is Dave Little, an absolutely fascinating character who I could have quite easily sat and listened to for hours on end. His history of working in the fashion and music industry is one that deserves an in-depth journal for all to read and enjoy. His creativity stems back to his career as a graphic designer, producing record sleeves, posters and flyers for dance pioneers and London club nights in the mid to late 80s. He met the likes of Paul Oakenfold before he burst onto the DJ scene and collaborated with him on numerous projects. His work became highly admired and sought after in the industry, so much so, it led to his artworks being featured in the V&A and galleries worldwide.

His popular work in the music industry was followed by a cutting-edge collaboration with high-end Japanese fashion designer, Michiko Koshino. She is probably most well-known for her Motor King collection, which Little produced graphics for. Pieces from this collection were worn by David Bowie, and are now highly sort after and considered collectable items. Taking inspiration from the urban streets and dance clubs of the 80s, it was a perfect artistic match for these two, and from looking at Rockers Delight’s first collection, a ‘vintage vibe’ still remains. However, the essence of his designs is perfectly reflected within its name. Dave, due to the influence of his rocker father who used to drive him to school on the back with no helmet, is heavily inspired by biker culture. We aren’t just talking Hells Angels, of whom he knows a few, but also military biker wear. He aims to bring the biker look back down to street level with his own unique style. He explains the brand as: “a range that marries tough, leather and drill classics with subtle graphic illustrations. Moving these staple items on with a discreet ‘second take’ approach.” 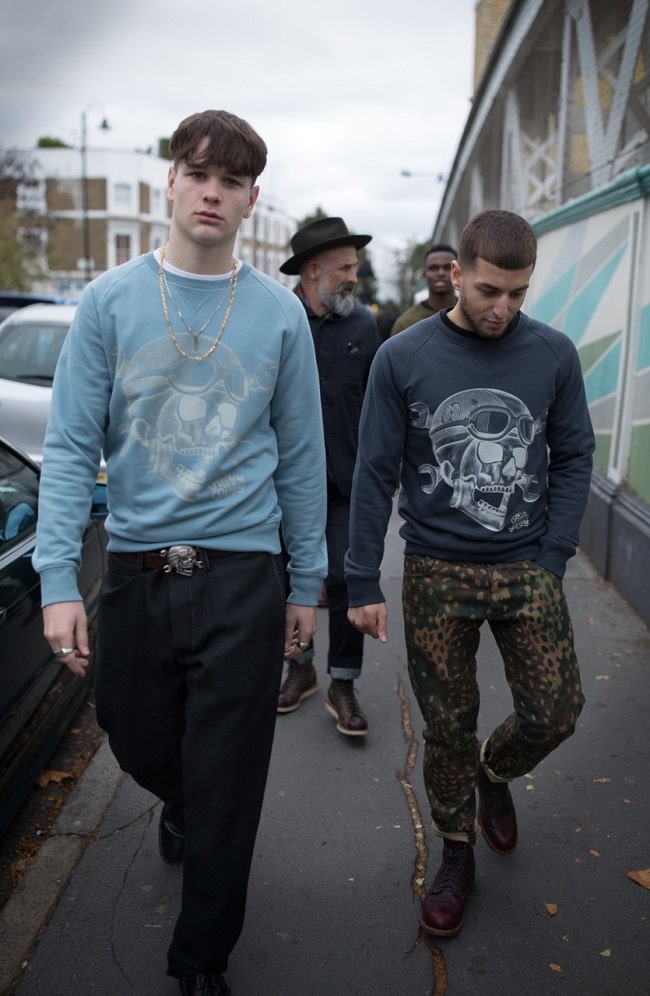 With the website only being launched within the last few months, this is new territory for Dave. He has previously had success with a skull printed t-shirt brand (VOTAN) however, due to explained circumstances, it didn’t have as long a shelf life than expected. Rockers Delight is definitely an extension of Dave’s own worker-wear/rocker style but one that can be worn by all ages. The staple cotton shirts, denim trousers and camouflage suits are beautifully crafted, with huge attention to detail and are aimed at the modern man. For those of you who are slightly more daring, his continued skull graphics are an addition to his aim to create “a world first 21st Century Rocker”. We sat down with Dave to talk all about his ambitious new adventure. 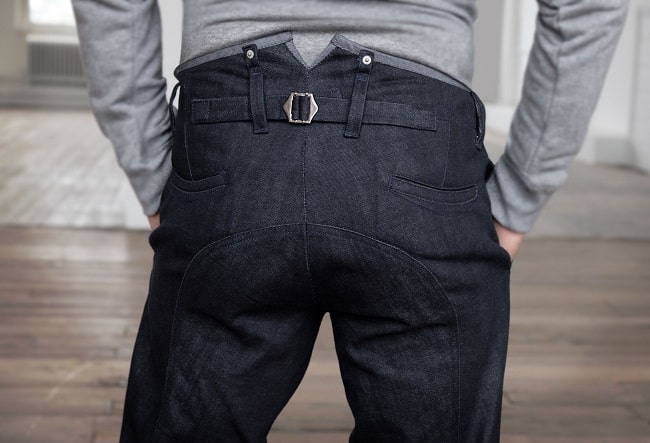 So, tell us how you came to creating this new brand.

"I started to create skull printed t-shirts in the early 2000s. A mate borrowed one of the t-shirts to go to the Rolling Stones licensing factory. They were huge and were sole merchandisers for the Stones. They looked at the t-shirt and offered me a deal straight away. Within five months I was in the top 5 sellers in the UK, everybody was wearing them. Unfortunately, Ed Hardy came along and knocked me off the top spot! I just couldn’t compete so that went by the wayside. Biking is a huge part of my life and I had a feeling, about 15 years ago, that old school bikes would be coming back in. Obviously now David Beckham is on his bobber bike and wearing classic Lewis Leathers (the oldest British motorcycle clothing company). My actual first leather jacket I wanted to produce was made at Lewis Leathers. I tried to do this all about 13/14 years ago but I couldn’t get any backing at that time. If I had, I would have been so far ahead of the curve but I was too young in the game at that time and I didn’t have the contacts that I have now. I learnt a lot from that experience. It’s not just about biking for me. Yes, that is my inspiration but the idea is that I wanted to create a collection designed by a biker. I have been influenced by my Dad who was a proper rocker and drove a Triton bike with leather boots. My logo is based around his helmet." 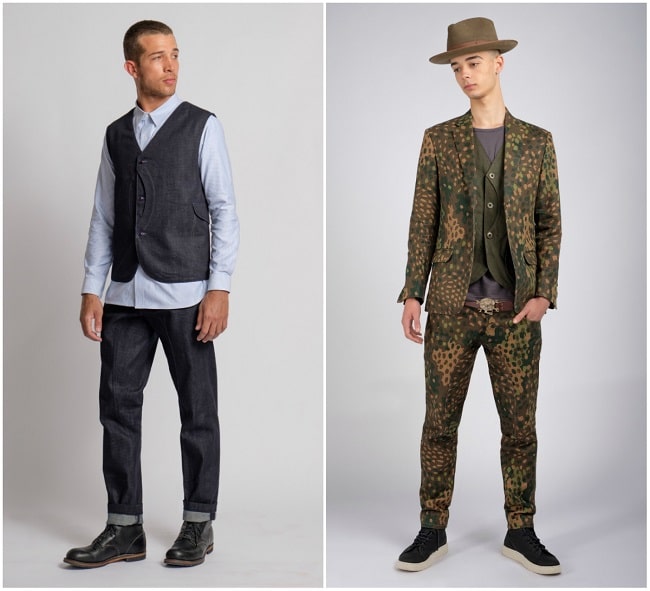 Can you explain a bit more behind the thought process of your designs?

"There are a lot of ‘pretend biker’ looks out there that aren’t well made. It is simply copied and I wanted to make something different. For example, everyone does a 5 pocket jean, so I made a denim trouser instead that is inspired by the Second World War rider’s trouser. It’s a double seated, one piece with a slash pocket. It’s a way to wear denim smartly. I don’t think many people have done it like this. It’s just a start for me and slightly frustrating as I know which direction I want to go but I’ve got to keep banging the drum to get it off the ground. Guys wear the same things over and over if they like the style. I wanted to create timeless pieces but with a bit of detail and some illustrations. Hopefully it will separate me from other designers." 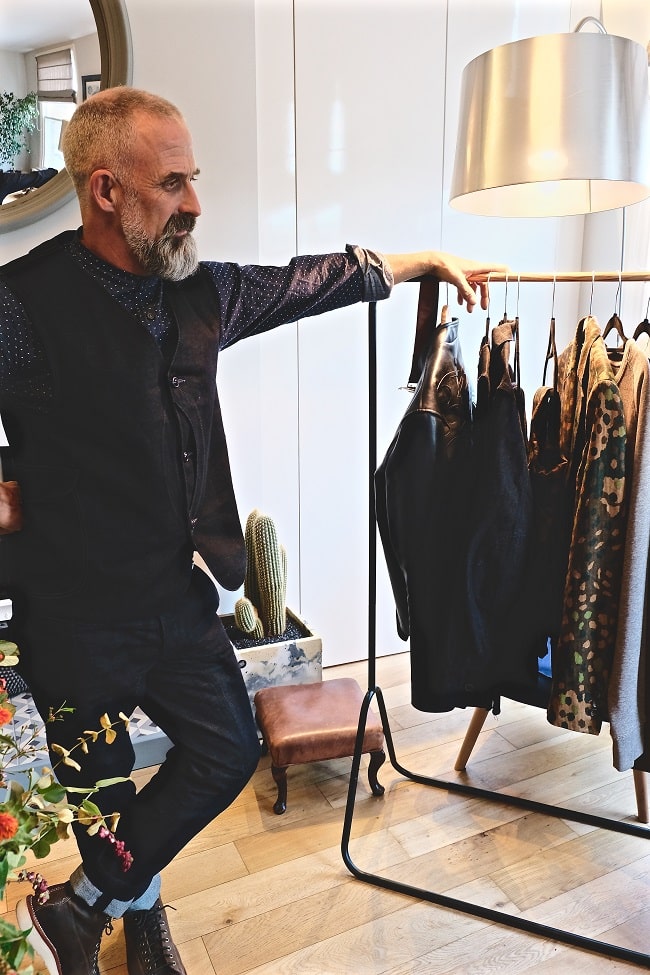 Tell us about some of the pieces in your collection.

"The suit is made with a Second World War German camouflage. It’s a 44 dot that has been used by various militaries around the world. This is inspired from what they wore in Stalingrad in the autumn and the dots represent the autumn leaves. It’s my favourite camouflage. I had it made in America. The shirts have what is called a yoke back. Again, inspired by the turn of the century. The seams were usually designed to strengthen points of stress in the back and underarms. I thought if you do the diagonal stripe with the horizontal seam, it would add something different. Everyone makes a standard shirt these days so I think the yoke back gives a unique visual look. We are eventually going to be doing these in different colours. The sweatshirts are a classic shape and due to my background in graphic design, I added the skull logo. There will be about another 10 designs to follow on. It’s a staple piece that can be worn easily. The waistcoat is called a half moon gilet. It’s a classic American working gilet. The fit is loose which was originally designed to fit tools in the pocket and work without being restricted. I love this piece. It’s great for layering over a shirt. The leather jacket is probably my favourite piece. You see a million leather jackets but again, I wanted to have my own stamp on it with the logo. Twenty feet away you can barely make out the applique ‘Rockers Delight’, but when it catches the light, you can see it. If I didn’t add something on the back, it would be a standard cafe racing jacket. I am fascinated with original biker culture and the likes of Marlon Brando. The backs of the jackets are called the rocker patches and famously a strong point. They can be garish with the typical ‘Live or Die’ but mine is more lighthearted and just a nod to the biker culture. I also thought, apart from Paul Smith, no one prints the inside of their jackets, so I’ve put the skull logo in there. It is made of high quality leather and is a bit more sporty and more modern than your classic Harley Davidson." 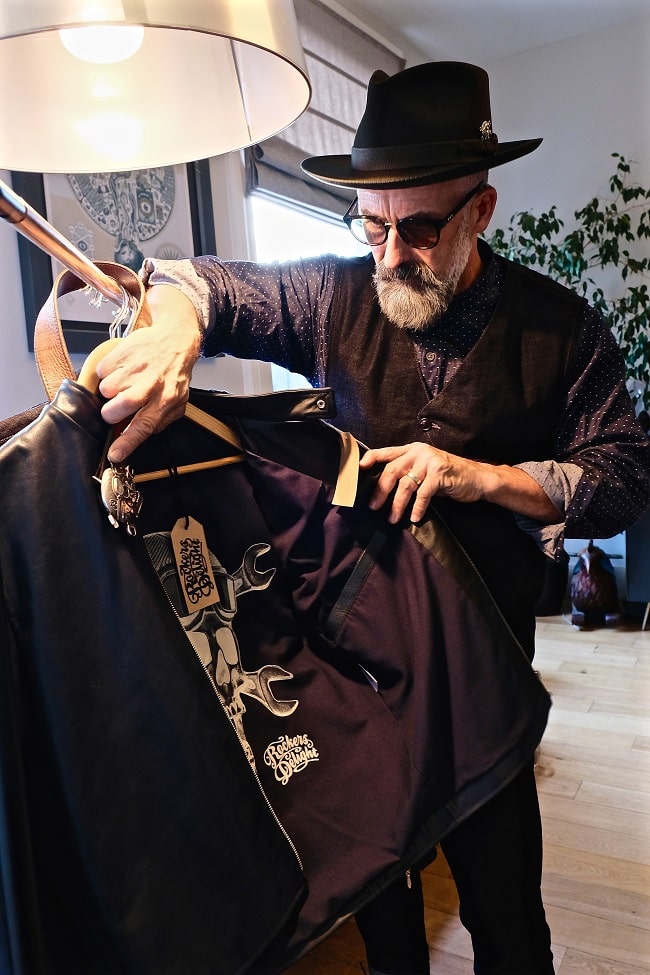 Where do you source your materials from?

"The leather jacket was made in North London. It is made from an absolute premium Italian Alba leather, which is a dyed sheepskin. The shirting and suits are made in Portugal and the sweatshirts in Britain. The denim, thanks to a great connection from my wife, is from India. Japan is the king of denim but Pakistan is actually great for Chambray. I'm doing more research into sourcing my denim from there as the money is just too much for proper Selvedge from Japan. Saying that, this denim is still utterly raw and unwashed. Denim is all treated today (sanforised) and is quite ‘cardboardy’, however, mine is cotton, raw hemp, denim."

What has been the biggest challenge with creating this collection?

"It’s just the manufacturing side of things as it’s always difficult to get something made to your exact requirements. Due to wages here and restrictions on production time, there is only a certain price point you can sell something at, so I have to get certain things made abroad. It’s so sad in Britain that there is nothing like what there used to be, in terms of factories. We used to be the best cotton shirt makers in the world and the same for shoes. There were factories everywhere! At the turn of the century there were around 1000 leather factories, and now there is nine. It’s very sad but I think it might come back one day." 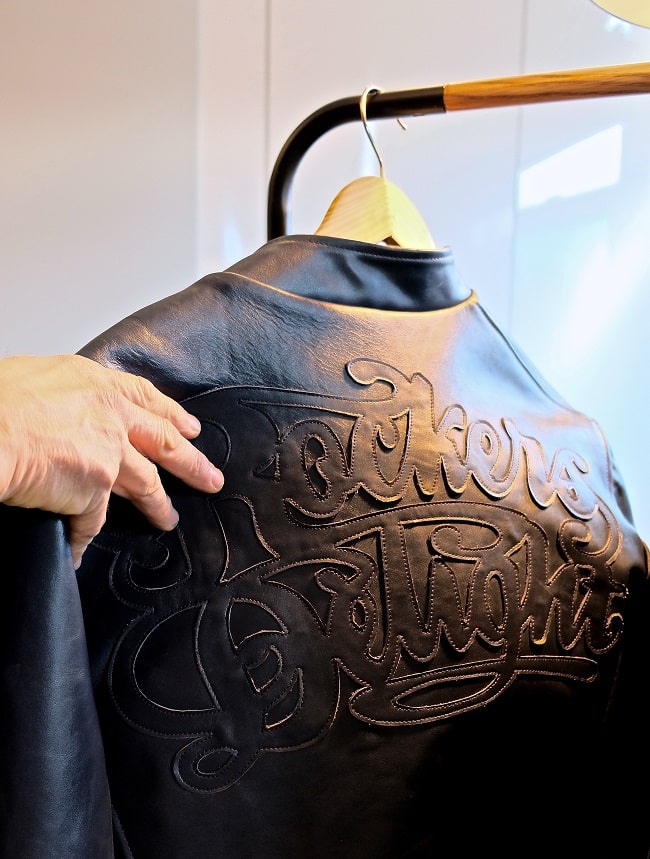 What is the modern man to you?

"He’s very eclectic. It’s like one of those flip books you had as a kid where you could flip a part of the body to change the shoes or jacket. There’s loads of influence in style out there. I’ve never seen so much difference but in a way quite often, everything still looks the same. I’m not knocking brands who stick to one style, it’s a safer option. I just like to see something a bit more distinctive. Styles do come and go and I think the skinny jean has almost disappeared. I think, at the moment, guys like a fuller trouser which is what I have done with my denim trousers. There is a bit more of a 1930s look and I think it is gradually filtering down on to the streets. Just go on the London Underground and you see a whole range of different styles."

Do you look back at archives of vintage clothing for inspiration?

"Definitely. I’m slightly obsessed with the American and British B1 and B3 flight jackets. They used to hand make their own leather patches. There was a whole world of graphics and with my background, that is what appeals to me. I’m going to be doing my own for sure. There are still a couple of companies in the UK who make the classic Second World War jackets. I’m looking to get them made in India because to get a top quality one, made here, would cost an arm and a leg. They are an investment piece and that is the future for me, hopefully." 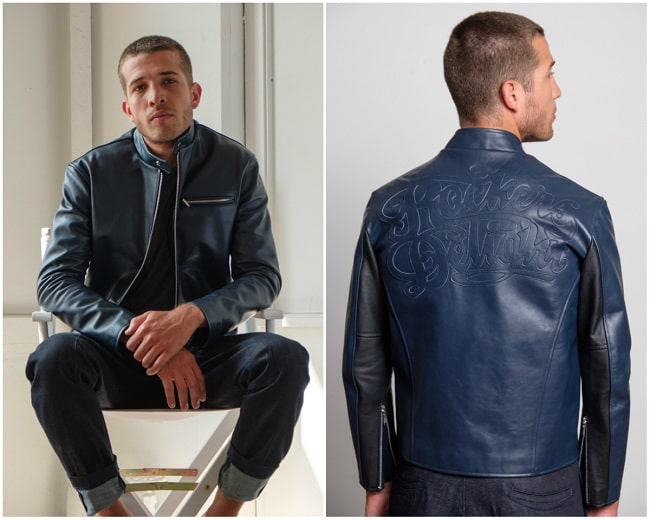 So, what does the future hold?

"There will be accessories in the new year, with belts and bags. I would also like to expand on the shirts. I think I will stick to seasonal collections but there will be classic pieces that will remain staples. I have a chocolate, cream and tan suit with double-seated trousers for summer. And hopefully a leather sleeve varsity baseball jacket, in wool, with a terry toweling letter on the back. I love those chunky vintage jackets! I have plenty of ideas, it’s just a matter of pulling them all together and making it work.