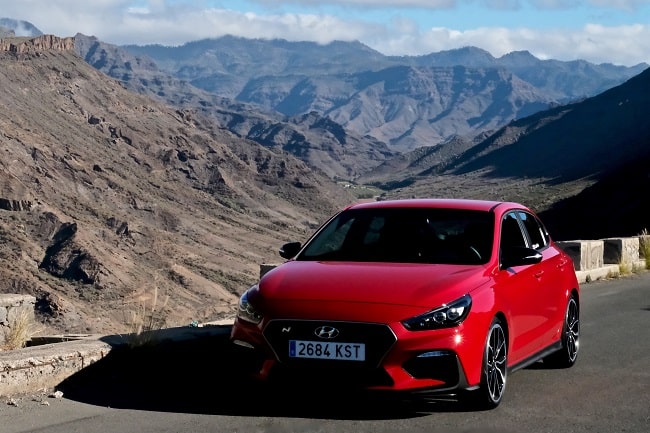 Last month, MenswearStyle were kindly invited to Gran Canaria to test out the newly released Hyundai i30 Fastback N. I can’t remember the last time I drove a Hyundai, but I was certainly intrigued to see what this new offering could bring to the table. The new addition to the N series is intended to be a slightly more sophisticated version of their surprisingly popular five door i30 N. As it was explained on the trip, this most recent addition has been ‘built for Europeans in Europe’ with the car being produced at Hyundai Motor Manufacturing Czech in Nosovice. It is safe to say that the N range has gone down well with over 9000 i30N’s sold in Europe in 2018. The Fastback N should build on that success.

Flying over the volcanic hills of Gran Canaria, it felt like we were entering the terrain of the prehistoric dinosaurs and I was half expecting to hear the theme tune to Jurassic Park as we landed. The excitement was certainly building as we arrived at our luxury hotel, Lopesan Baobab Resort, situated on the south of the island in Maspalomas. The Hyundai flags were flying outside this mammoth hotel, with the Fastback N proudly parked up on display. I don’t think I have ever been to such a huge resort, where we were handed a printed map at checking in and made aware it was very easy to get lost. Luckily, there were plenty of staff on hand, dressed in their safari gear (to match the decor of the hotel), to help point us in the right direction for dinner. We were treated to an amazing six course meal where we met up with other car enthusiasts from different parts of Europe and were shown a informative presentation about the i30 Fastback N. 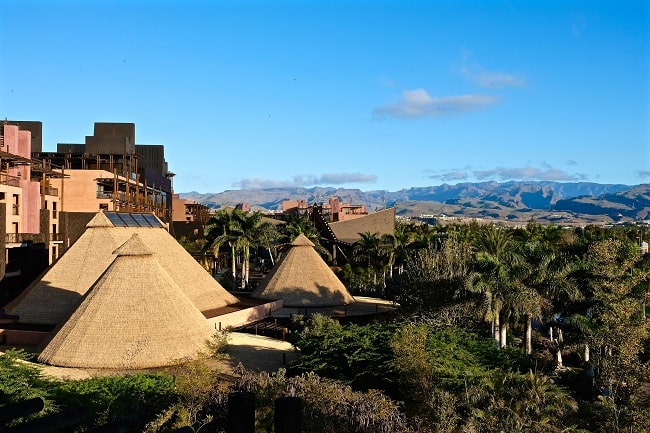 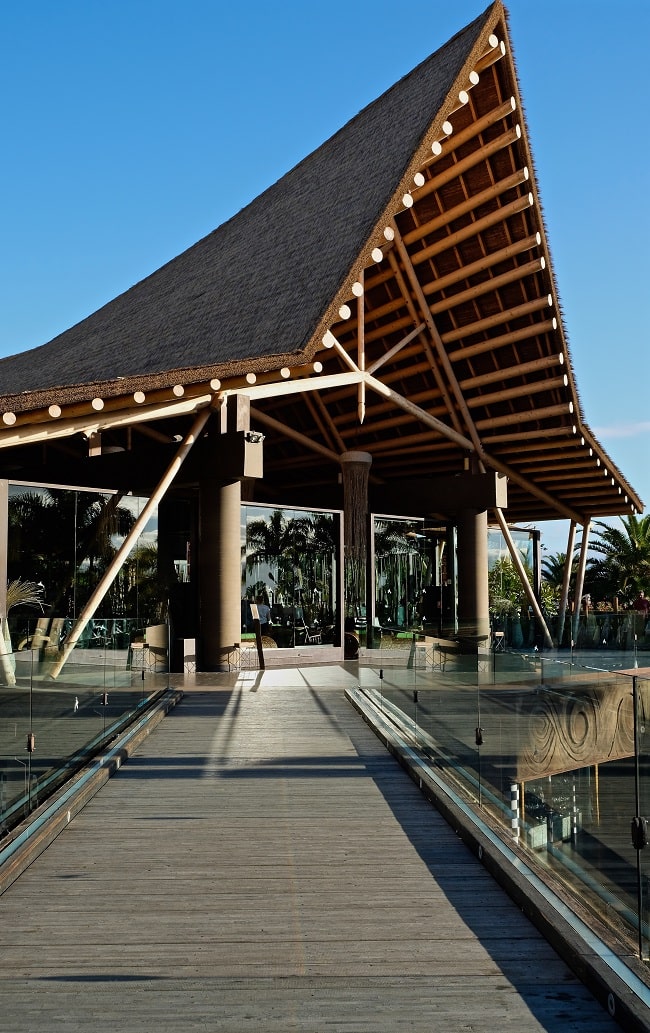 The next day involved an early rise. We had been warned the previous evening that it would be a jam-packed day and it started off from our hotel by collecting our cars. Each of us were given our own car for the day with the added thoughtful touch of our country flags and names placed on the rear passenger window. After a quick introduction to the new car, we turned to find our Fastback N, resplendent in Engine Red in the welcomed 20 degree sunshine. The car is also available in five other colours, and Shadow Grey is exclusive for the launch. Stepping inside the car, it was slightly nerve-wracking as this was admittedly my first time driving on the other side. Saying that, I felt extremely comfortable in the ‘faux’ suede & leather sporty seats and was immediately impressed by the interior and dashboard design. The seats are available in suede and leather with a standard touch of red stitching detailing. You are instantly introduced to the sporty aspect of the car with the metal foot pads and other aluminium accents within the interiors. 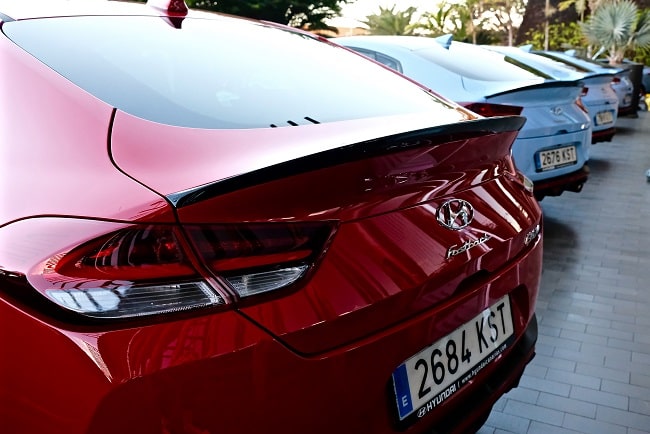 Our Fastback N was manual drive with a six speed gearbox. The dashboard has all the modern technical gadgets you need, including 3D navigation on an 8.0 inch touchscreen, which handily comes as standard. There is much more to this car than originally meets the eye as at the flick of two switches on the steering wheel you have access to the N Drive Mode Control System. With this you can choose between Normal, Eco, Sport, N and N custom. The N mode gives you the experience of track driving, without being on an actual track, and in the N custom mode you can alter the settings of the engine, suspension, steering, stability control and Rev matching (which can give a smoother experience when downshifting). We had the opportunity to play with these out on 11km of private road on the island. 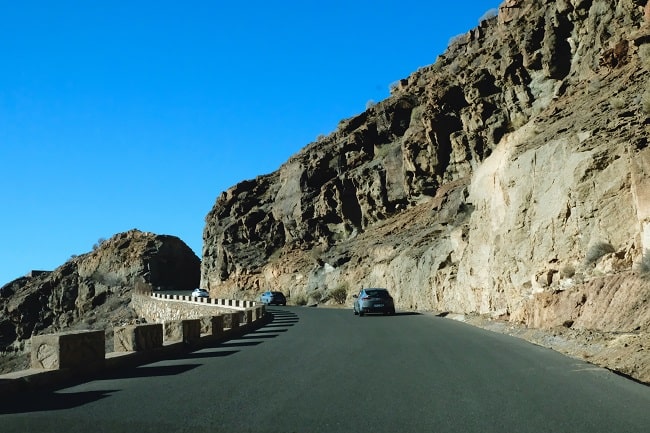 The car was put to test on a dramatic winding path high up into the volcanic hills of the island where the views were nothing but spectacular. We were given plenty of instructions by ex-racing professional who told us the best way to attack the bends, as well how to correctly sit in the car and how to alternate between the Sport and N modes. We were also made aware of various important safety aspects including Forward Collision-avoidance Assist and Driver Attention Alert. These twisting roads with intermediate long stretches of tarmac were the perfect setting and opportunity to really experience what the 2.0 litre turbocharged engine had to offer. 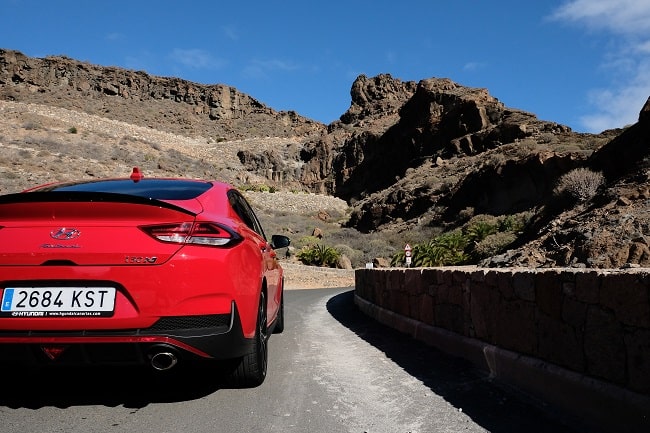 As we drove around taking in the scenery, whilst testing our driving skills, the sound of the cars revving echoed off rocky cliffs. In the N Custom mode you can actually select which exhaust sound you prefer. Hiking up the revs can release an exhilarating popping sound that really makes you feel like you are out on the track. The Electronic Sound Generator, built into the body panel helps create this acoustic drama. For those of you who like to know the numbers, the car can reach a maximum speed of 155mph, with a maximum power of 275 PS and maximum torque of 353 Nm. Thanks to research from design specialists, the car has been produced with aerodynamics at the forefront in order to produce the best driving experience possible - resulting in a longer line than the Hatchback and a more eye-pleasing sloping rear. 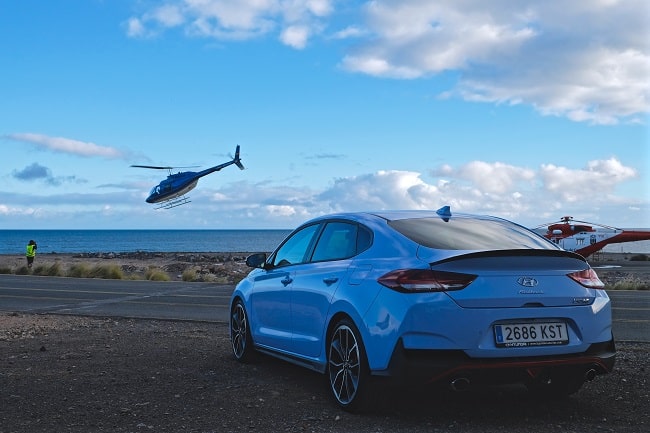 After our drive in the car, the trip took an extreme turn when we were taken on a walk on the wild side through a canyon which lead to the famous climbing sight, the Via Ferrata. I wasn’t quite prepared for what was to come, and perhaps it was for the best as I probably would have swiftly turned around! The excursion involved some treacherous rock face climbing, to such a height that the local soaring falcons seemed to join us at a similar level. There may have been extreme moments of fear and a few bumps (a rock to the head!) and scrapes but it was an unforgettable experience. And to continue the adrenaline pumping theme of the trip, our climbing was followed by a incredible tour over the island by helicopter. If you ever have the opportunity, this is not one to be missed as the views of the famous dunes and mountains are nothing but breathtaking. 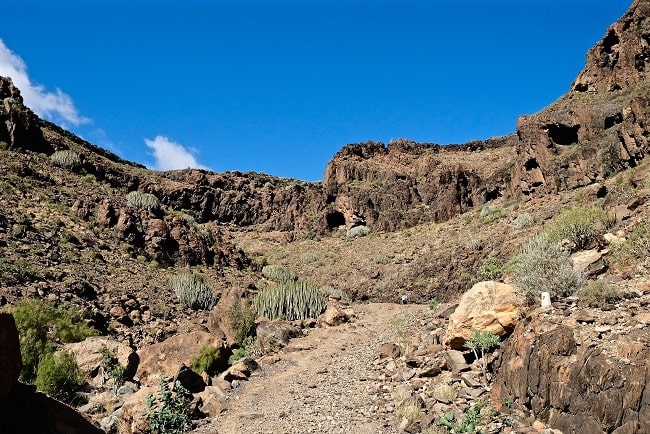 We had a fantastic time in Gran Canaria with Hyundai. All in all, the car is extremely responsive, has a high level of precision in its steering and is great fun to drive. It might not look like your typical supercharged sportscar from the outside but pushing the pedal to the floor on Sport mode, certainly gives you the experience of one. There is a lot of offer with this car; Hyundai's image and reputation has dramatically changed over the past few years and they have rightly been bumped from ranking 23rd, in 2008, to one of the top 10 car manufacturers in the UK. A huge thank you to the whole Hyundai team for taking us to Gran Canaria to test the All-New Hyundai i30 Fastback N. This car is made for an adventure, and that's exactly what we had. 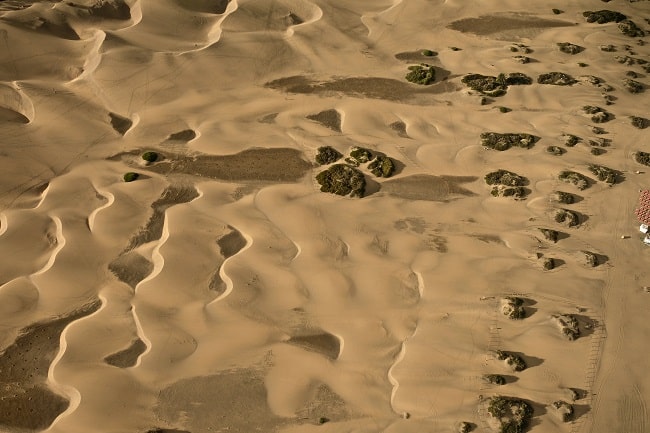