THESE ARE THE MUST-WEAR PRINTS FOR SS19 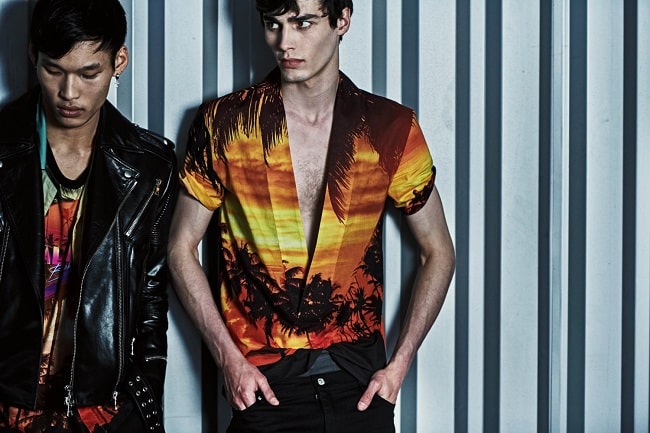 It’s the season of prints! We’ve heard this sentiment countless times over the past five or so years. Paisley evolved to florals, and from there, the possibilities have seemed infinite. Retro Hawaiian prints? Colourful plaids? Tessellation-like geometrics? We’ve seen it all before, to the point all now seem fairly unexceptional. SS19 represents another boundary-pushing chapter – one of blurred masculine and feminine boundaries, blast-from-the-past patterns, and a place where, even as crazy as it feels on occasion, you can only go up. Here’s what you should expect:

Balmain’s SS19 Resort collection got us excited about this trend last year, with burning reds and yellows highlighting palm tree silhouettes. Yet, as a progression of the Hawaiian shirt trend, this imagery has evolved into SS19’s dominant print: Island scenes, palms, and florals – some photographic and others appearing like modern art or an illustration – elevate this above the “dad” series of trends. 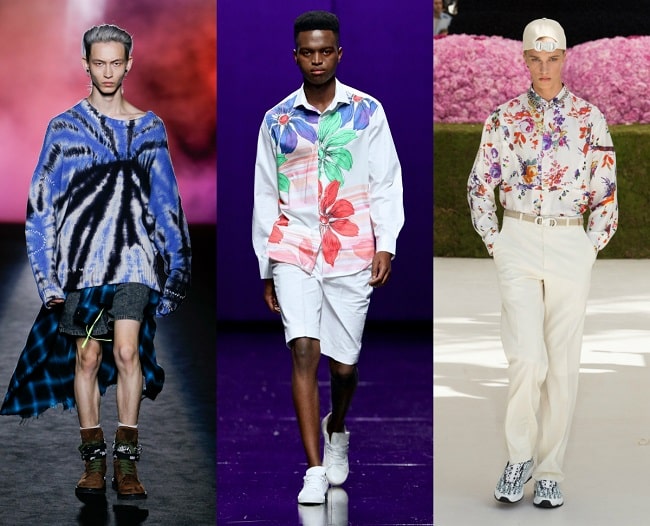 It’s a print with something to say, if you look close enough. Distorted or repeated words and newspaper prints – occasionally retro or holding a hidden message – are suddenly everywhere. Perhaps it’s a subtle and subversive reaction to all those “false news” declarations – without actually having to wear a graphic tee sporting that slogan. Or, else, it’s emblematic of the fleeting nature of the press: Print news is nearly gone, and you can’t trust what’s on the web, so you turn to pretention-free style.

Although streetwear brands started reviving the Woodland pattern roughly four years ago, prints have moved on from the obvious and dated to more modern and experimental versions: Case in point, deconstructed, distorted Woodland, digital camo (what’s been on uniforms since the early 2000s), and pixelated versions that, maybe less directly, reference the gradient-based, colour-shifting Multicam pattern introduced around 2010. 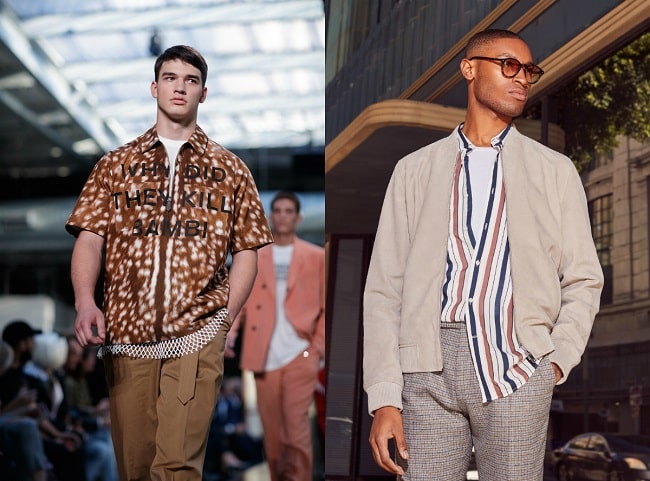 Or, more appropriately, “dad” florals. A print your father might have worn 50 or so years ago, these two-dimensional combinations reference ‘60s counterculture style – considering August is the official anniversary of the original Woodstock festival, it feels appropriate. Resembling something Jimi Hendrix might have worn, these flatter-seeming, more repetitive patterns indicate a shift from the large-scale, bold florals we’ve spotted over the past few years. 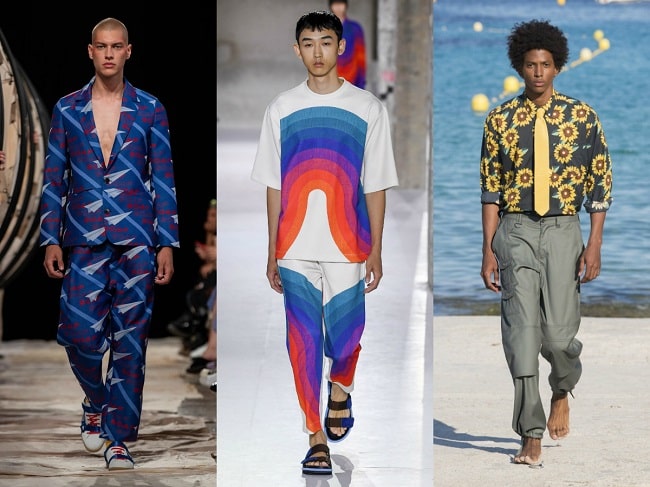 When you’ve got money to spend, you don’t stay home. Made for the globetrotter in all of us, these all-over prints – often resembling wide-scale landscape shots or old postcards – hint that you’ve been to plenty of places and have more of the world to see. As this season’s true statement combination, the patterns’ intricate, bold nature quite literally has to be seen – and should be paired with solid neutrals, so it doesn’t get lost.

Leopard spots? Snake skin? Been there, done that, over and over. Now’s not the time to be an easy lounge lizard; rather, your stripes and scales have to evolve. As such, SS19 clearly alludes to these Vegas-esque prints, without seeming pulled from a trashy Strip attraction. Rather, you see the semblance and notice the evolution – in stark black and white, in softer, subdued hues, deconstructed to a point, or turned into a hybrid pattern with stripes or geometric elements. 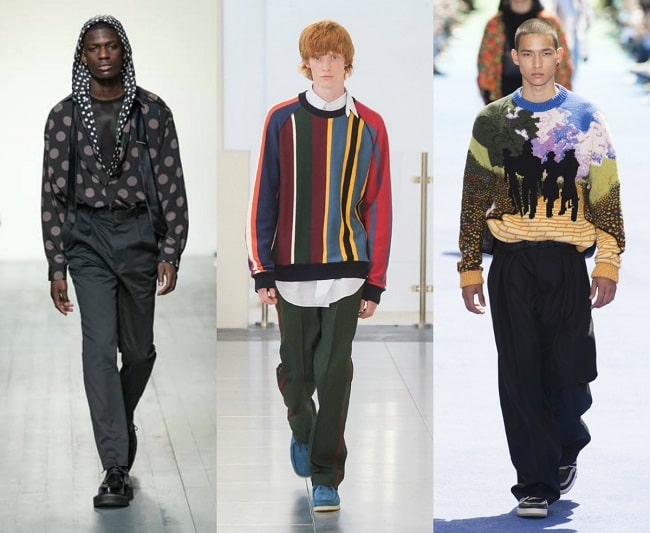 In vertical and horizontal configurations, stripes got a whole lot sweeter for SS19. From High Street brands like River Island to more higher-brow fare, the two-tone beach chair stripes have moved on. In place are uneven lengths – much like an old-fashioned candy stick, hence the name – and incorporate at least three hues. A strictly casual to smart-casual print, it’s been spotted running across plenty of camp collar shirts, polos, and sport tees.

With tailored silhouettes making a comeback for SS19, all those ‘90s-based styles from the past few seasons appear to have met their limit. That’s not to say a few haven’t stuck around. Tie-dye – likely seen on a Grunger or late-comer Deadhead 25 years ago – is relatively new to the runway, and likely as such, designers appear to dabble with it on their own terms. 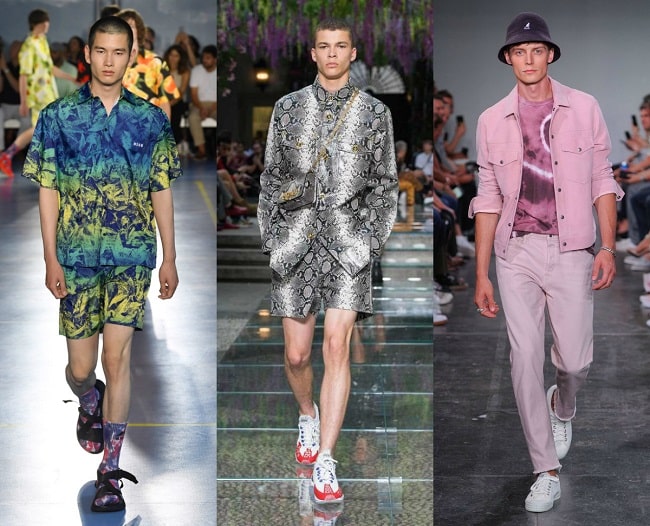 As a baseline, a two-tone print applied to tees, blazers, and even trousers, offers a less-predictable and an uncontrived take on ombre. Other versions take the ‘90s allusion seriously, often resembling a multicoloured kaleidoscope pattern and feeling distinctly youthful. As a third iteration, there’s the rave pattern: Dayglo neon shades mingle together, flowing from one to the next through a gradient-style pathway. Although it’s a daring trend to pull off, it shows that, to do neon, you don’t always have to stick with solids.