THE NUDIE SUIT HAS MADE A BACKDOOR-LIKE RETURN 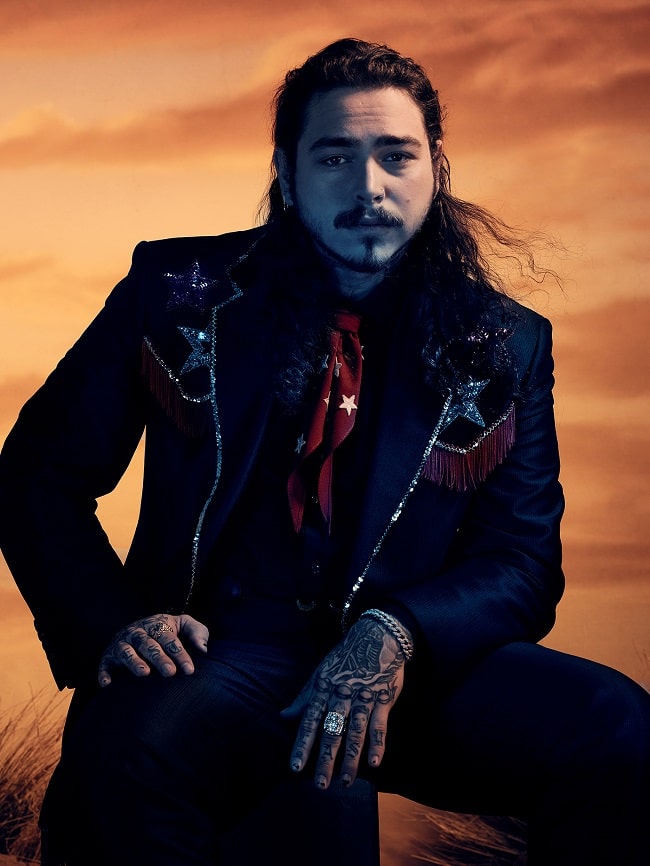 Some things are just better left in the past. Take shell suits or that Von Dutch hat. No one – not even those die-hard retro enthusiasts – really wants to give them a second visit. No irony can be mined from them, they’re that dry, and their yesterday’s-news status is better suited to a punchline. Then, within the fashion and, to a lesser degree, the full pop culture spectrum, certain older trends just have that shine. They’re easily reworked – think the dad shoe or even pleats – and repackaged for the younger crowd who doesn’t quite have the memories you have. Or, if they do, it’s photograph-lifted nostalgia. So, within this dichotomy, where exactly does the western suit – or, more commonly, the Nudie suit – fit? With all the details that go into one, it would be irony you’ve really, really got to care about – and, at that point, you might as well call it authenticity.

Its cowboy-movie-in-Vegas trope could be called “tasteful tackiness” – not in a so-bad-its-good way, but more in line with the whole more-is-more aesthetic running through current menswear and streetwear trends. Thirdly, it’s not quite American heritage – it’s definitely American, down to the whole Horatio Alger-esque backstory, but steers very clear of the whole “living off the land” vibe that gives Carhartt, Filson, and Timberland that edge. To sum it up, it’s movie-cowboy style for the guy (or gal, in some cases) who knows he’s living the Hollywood dream – and loving it. Or, it’s Lana Del Rey-level livin’-Americana symbolism, without all that “Summertime Sadness” stuff. However, you want to position it, the Nudie suit has made a backdoor-like return, and we’re all just trying to process it now, but can’t fully wrap our heads around it. 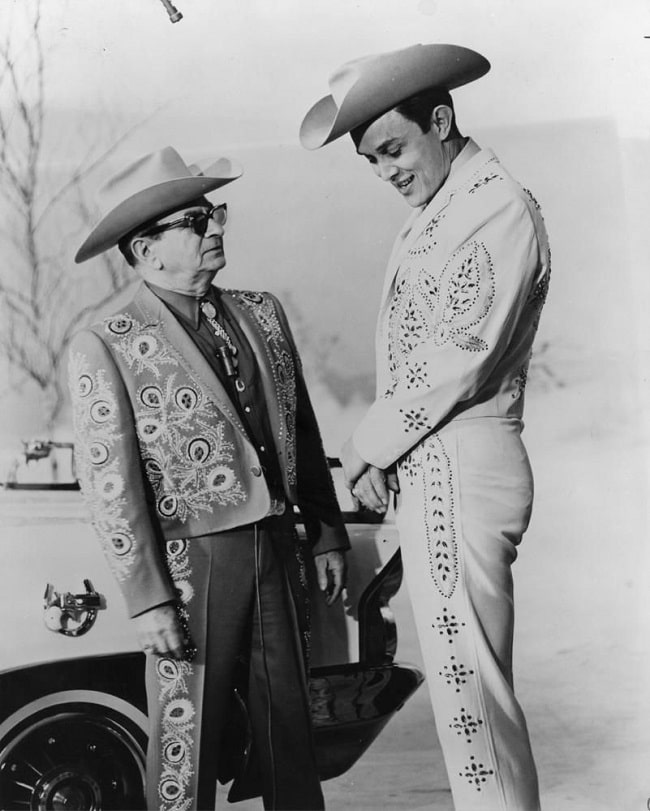 Of all channels through which the Nudie suit could have returned, hip-hop seems the least likely. Given its history, country – or even some Southern-fried alterna-rock – seems like a more open pathway. However, over the past couple of years, Post Malone – the face-tattooed Soundcloud rapper of “Rockstar” and “Jackie Chan” fame – stepped out in a few styles designed by Union Western Clothing’s Jerry Lee Atwood and Joe David Walters at the American Music Awards, the Grammys, and the Elvis All-Star Tribute to celebrate the anniversary of the singer’s ‘68 Comeback Special. Yet, while Post Malone’s getups seemed to come out from nowhere in terms of pop culture, the fashion world started dabbling with cowboy motifs and Americana a few years before. Pointed out by Billboard in 2016, Gucci, Valentino, and Dior alluded to the Nudie suit that year, specifically its distinctive rhinestones and appliques. By 2018, you could see an overarching theme on the runways, with designers like Raf Simons and Calvin Klein trying out satin western shirts and Cuban-heeled boots to explore the ephemeral nature of stock Americana symbols. 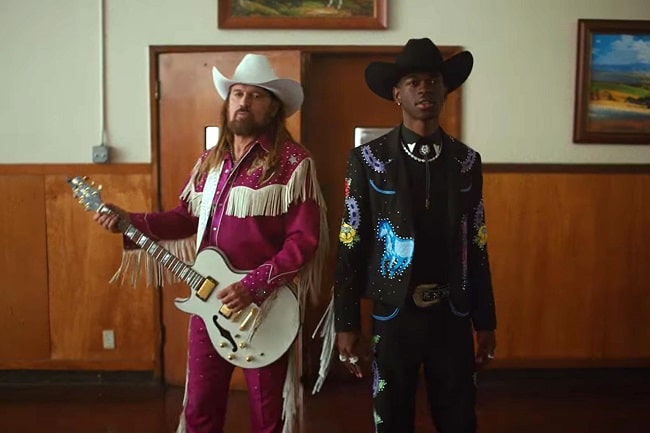 As perhaps the impetus to all these western fashion think pieces, “Old Town Road” – the Lil Nas X Billboard record-setting hit that, too, caught fire from no cultural reference point – created the bridge between the suit’s old imagining and the new perspective set forth by Post Malone. The song – and to an equal extent the suit, also designed by Atwood and Walters – sticks with that mumble-rap sound we’ve come to expect from Soundcloud rappers, but incorporates strong country elements, due in part to the inclusion of old-school one-hit-wonder Billy Ray Cyrus. If it couldn’t get any clearer, the video’s past-into-present imagery hits this message on the head, with Union Western’s black embroidered ensemble appearing toward the end. Even if you don’t think “Old Town Road” counts as a true country song, it falls in the footsteps of and succeeds that Nelly-featuring Florida Georgia Line endeavor “Cruise.” Basically, hard genre lines no longer exist, blending two seemingly disparate musical styles isn’t that complicated, and a Nudie suit is no longer exclusively reserved for the rhinestone cowboy. So, where does western fashion go from here? 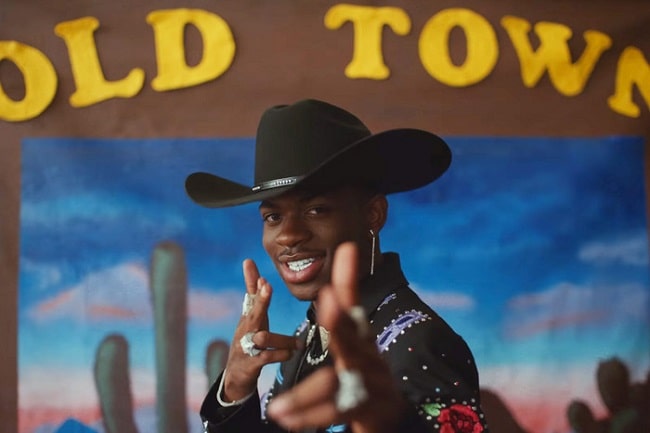 What Counts as Western Fashion?

There’s no true definition, to put it succinctly. Clothing that dates back to or is inspired by the Old West – and all the lawlessness and working-the-land of the 19th century American territories – now encompasses everything from Wrangler jeans and 10-gallon hats to bedazzled cowboy boots, conchos, bolo ties, and Nudie suits. Designs to some degree allude to the pioneers and the Gold Rush, as well as to Mexican vaqueros and American cowboys, but you’ll also find a higher degree of John Wayne – the myth and the movie characters, more so than Marion Morrison – and less the Republic of Texas – although some percentage of Southern pride may worm its way in. Fashion wise, it’s not too hard to spot westernwear. Shirts frequently sport contrast piping, stylised yokes, and snap plackets, while embroidered floral details show up relatively regularly. Fringe and rhinestones tend to give garments an edge – although they’re more movie cowboy fare – and denim – preferably 100-percent cotton with a tapered or boot cut – references older wool and canvas work trousers with its thicker feel and visible weave. Cowboy boots – a high shaft, Cuban-style block heel, and rounded toe, usually with lots of detailing on the exterior – finish things off. 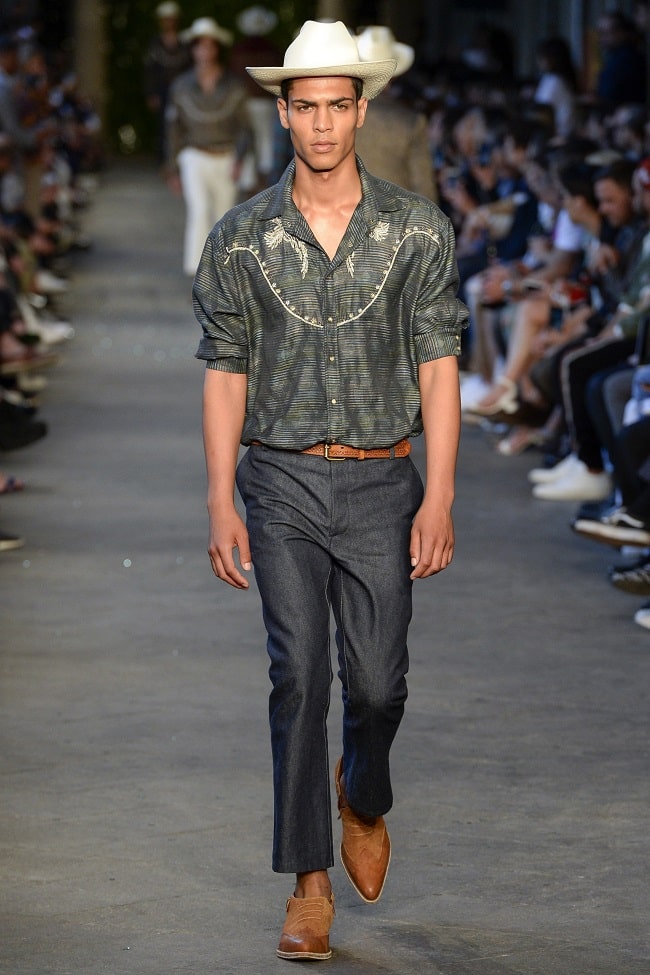 Where Did the Nudie Suit Come From?

As the basest of summaries, the Nudie suit – once crafted or inspired by Nudie Cohn – takes all of these western tropes, throws them in a blender, and adds a strong dash of sparkle on top. A Ukrainian immigrant, Cohn – born Nutya Kotlyrenko – arrived in the U.S. at age 11 and, while living in New York City, got enthralled by the westerns showing at the city’s cinemas. Cohn also had some sewing skills and parlayed this into his first business – Nudie’s For The Ladies, a shop that made and sold bedazzled G-strings to burlesque and vaudeville performers. By the ‘50s, he went out to the West Coast, where he and his wife set up another business that drew in a few western and country music clients – including Tex Williams. For a particularly large performance, Williams supposedly requested a suit so flashy it could be seen from the nosebleed seats, and that’s exactly what Cohn put together. With some investment from Williams, Cohn was able to grow his business, and word of mouth brought in customers like Gene Autry and Roy Rogers – who sported the styles in his eponymous TV program – and Lefty Frizzell. Early designs evoked traditional western iconography – roses, cacti, hearts, and wagons – and by the time he designed Frizzell’s number, rhinestones came into play. While casual western clothing grew through the ‘50s and ‘60s, a Nudie suit was exclusively custom crafted for each client. 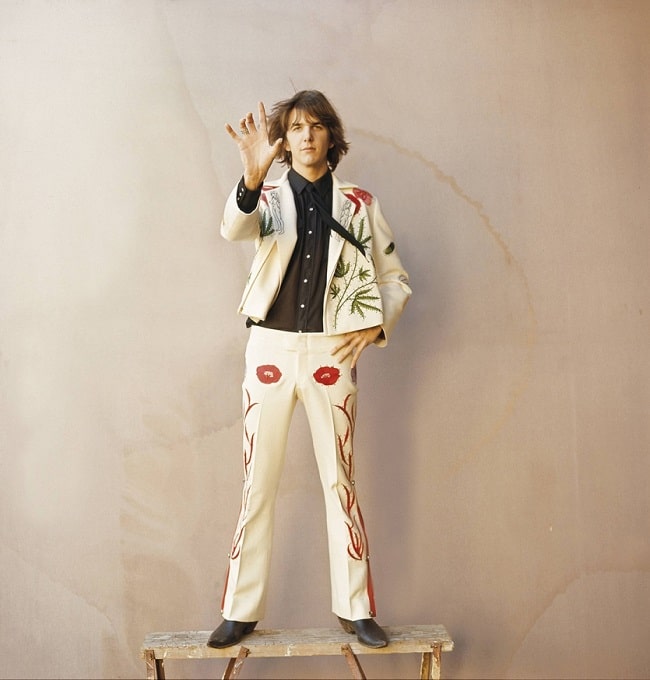 Cohn’s own store – first in Hollywood and later in the Fernando Valley – turned into a social club, of sorts. By the early ‘60s, Hollywood’s elite came to Nudie’s Rodeo Tailors for a mix of dancing and drinking – the store had a bar at the back – and jam sessions. Over the next few decades, Cohn’s suits were a must-wear for plenty of music stars. The who’s-who of country – Hank Williams, Dolly Parton, and Johnny Cash – all donned one at one point or another, and making the move into pop music, these intricate novelty designs graced Cher, ZZ Top, Sly Stallone, David Lee Roth, John Lennon, and Elvis, whose gold lame getup on 50,000,000 Elvis Fans Can’t Be Wrong is credited to Cohn. Lesser known today, Gram Parsons wore one of Cohn’s more boundary-pushing designs – the cavalry twill two-piece featured naked women, pot leaves, poppies, and LSD-laced sugar cubes, added a large cross on the back, and fit flames on the trouser legs – on the Flying Burrito Brothers’ debut. The design now sits in the Country Music Hall of Fame. Cohn passed away in 1984, but his family kept his shop open until 1994. More recently, daughter Jamie Lee revived the brand. Since then, she dressed singer Kesha for the 2018 Grammys and outfitted the cast in the Hank Williams biopic I Saw the Light. 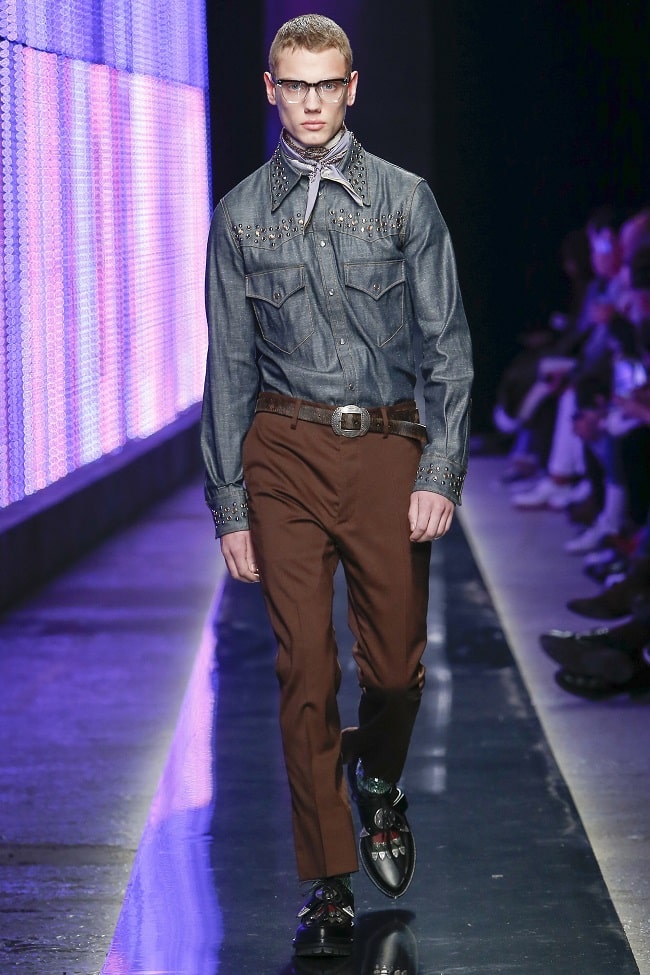 Where Does Western Fashion and the Nudie Suit Go From Here?

For Lil Nas X, that’s a collaboration with Wrangler jeans angled to the “modern cowboy.” While many customers were against the classic denim brand’s move, sales tell a different story. The collection has since helped revive Wrangler, diversified its string of collaborators, and got consumers who would’ve ordinarily passed over its products interested in the brand. But, what about the western suit? In spite of the name, the style didn’t live and end with Cohn, and today’s newer crop of brands, like Union Western Clothing, have been keeping the style going while adding their own spin. Making western wear since 2012, this Indiana-based company had been creating custom suits for weddings, western wear enthusiasts, and independent country and Americana acts – among them, Robert Ellis, Nikki Lane, and Joshua Hedley – before Post Malone’s stylist Catherine Hahn reached out to them over Instagram. Hahn was also styling the “Old Town Road” video, and recommended Atwood and Walters’ designs for the shoot. “She asked us to create a suit inspired by his hit single with Billy Ray Cyrus, and we only had three days to complete it!” Atwood tells us over email. “It was a mad rush in the shop, but somehow we finished it.” 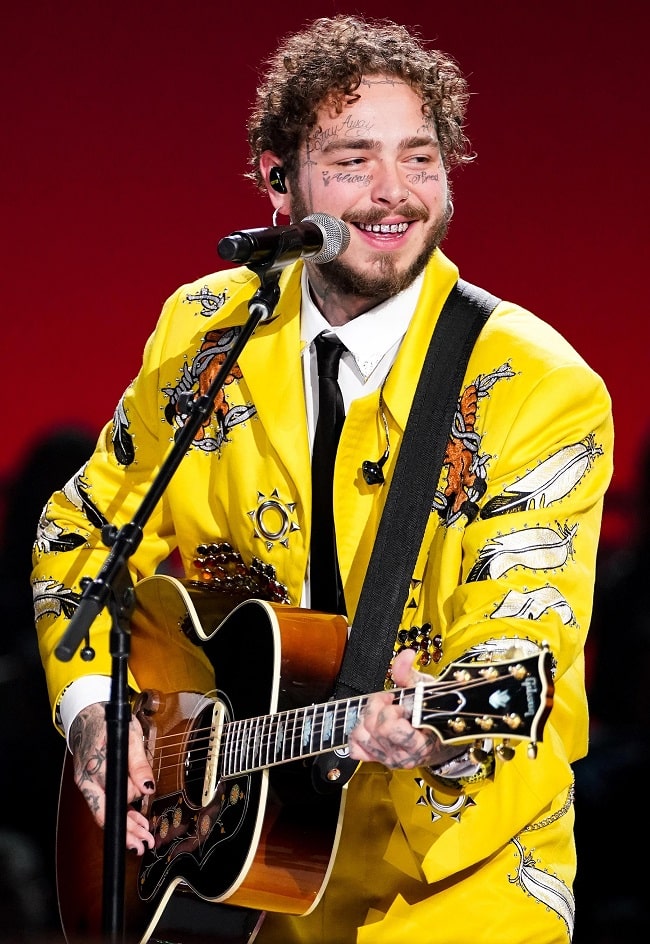 They produced a second suit for Lil Nas X – this time, in red with snakes and other mystical elements – that he wore for the VMAs. Not calling their styles “Nudie” suits, Atwood and Walters strive to continue the tradition pioneered by Nathan Turk, Rodeo Ben, and others who made these suits what they are today. “We're not trying to reinvent the wheel, but I think thematically, we are responding to our culture and environment and obviously telling the story of the person who wears our suits,” Atwood explains. “Much like tattoo artists, everyone who makes an embroidered and rhinestone encrusted suit has a certain style that makes their work unique. The more of our work that gets out there, the more people are able to immediately recognise it as one of our suits and our style." Since exposure through Lil Nas X and Post Malone, plus shoots in GQ and Vogue, business has picked up significantly at Union Western’s Indiana shop, to the point they’re receiving nearly daily requests. “It's been pretty surreal!” Atwood says. “We can't keep up with demand, mostly because the suits are all made to order at our shop in Indianapolis, and there just isn't a sewing industry here, so good help is difficult to find and those who have sewing abilities already have a position in the field.” 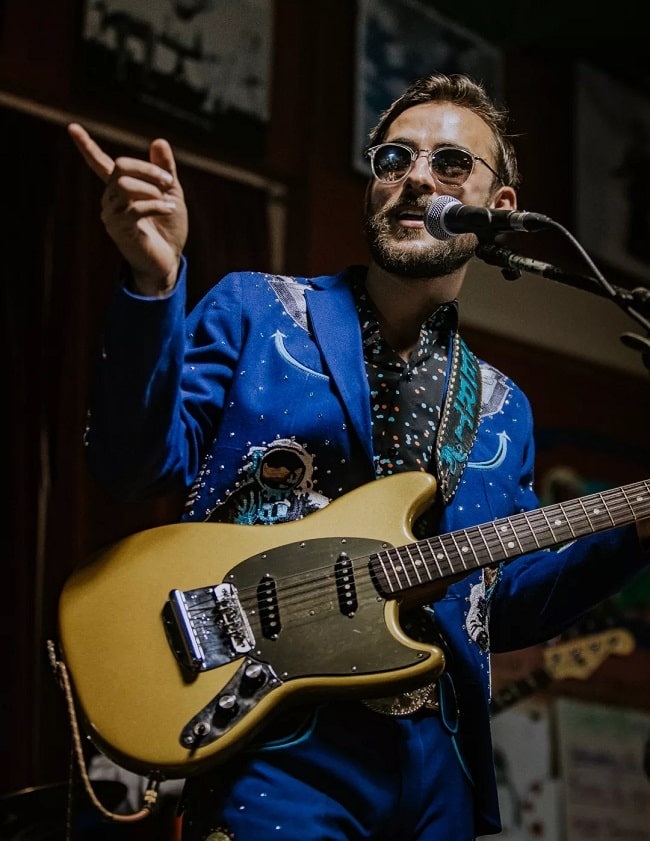 “I think in pop culture, western wear is definitely having a moment,” Atwood adds further. “It always seems to be on the periphery, and I think the more people are exposed to this type of suit, the more they dream of owning one. A lot of Millennials have never seen this type of suit before and didn't grow up watching HeeHaw or seeing Porter Wagoner on album covers. This is new to them, so it's interesting and exciting.” Where else can you spot Union Western’s suits? While they generally don’t reveal projects until the suits have made their debut, they’ve been working with fringe-masked Canadian country singer Orville Peck and outfitted country supergroup The Highwomen for the cover of their self-titled debut album.