WHY LEATHER IS MAKING A COMEBACK FOR AW20 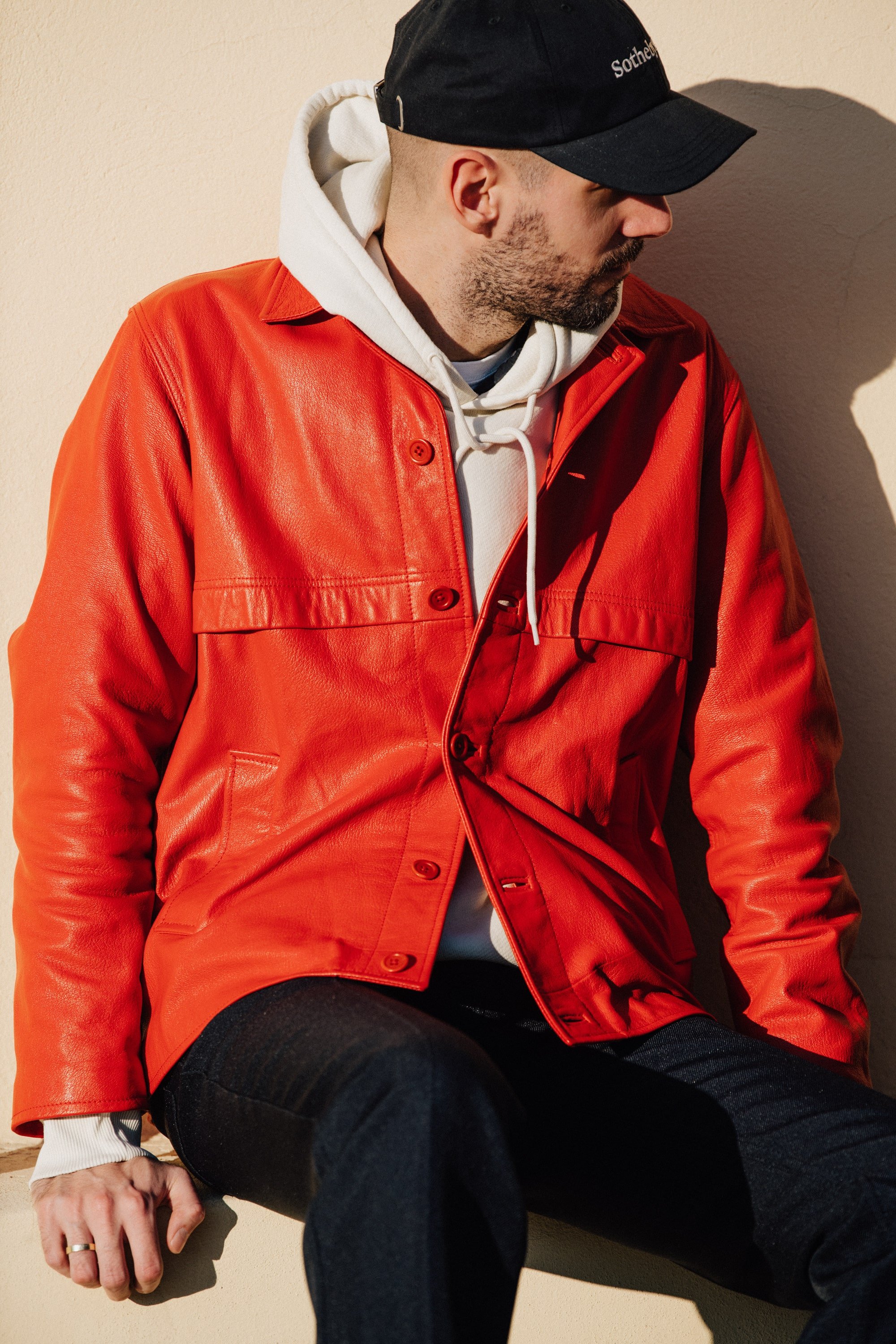 If something never went away, can it actually make a comeback? That kind of depends on what you’re talking about and its degree of cultural saturation. Take camouflage, for instance. It’s one of those patterns that experienced an apex in ‘90s streetwear, never fully disappeared but slank back a bit into a ho-hum casual staple, and went through a high-fashion resurgence, partially through steadfast admiration for late ‘90s streetwear trends, a couple of years ago. A similar swell has taken leather beyond cool-weather staple for AW20, to the point the year’s hottest item that’s not a suit or classic piece is a pair of leather trousers. For decades, the leather jacket has served as the ultimate symbol of rugged masculinity through multiple lenses. Through one perspective, you see a biker – perhaps with a crew or a lone wolf – who takes to the roads with no clear destination but full of a sense of adventure and exploration. His leather jacket’s not just style – it’s a way to be protected against the unpredictable elements and the possibility of road rash.

Then, there’s the Hollywood rebel – a bit Marlon Brando, a bit James Dean – who’s secure enough in his masculinity, even though he’s not always the buffest dude out there. He’s the type that makes a uniform out of blue jeans, broken in perfectly from regular wear, and a white T-shirt, with a leather jacket solidifying his badass status. 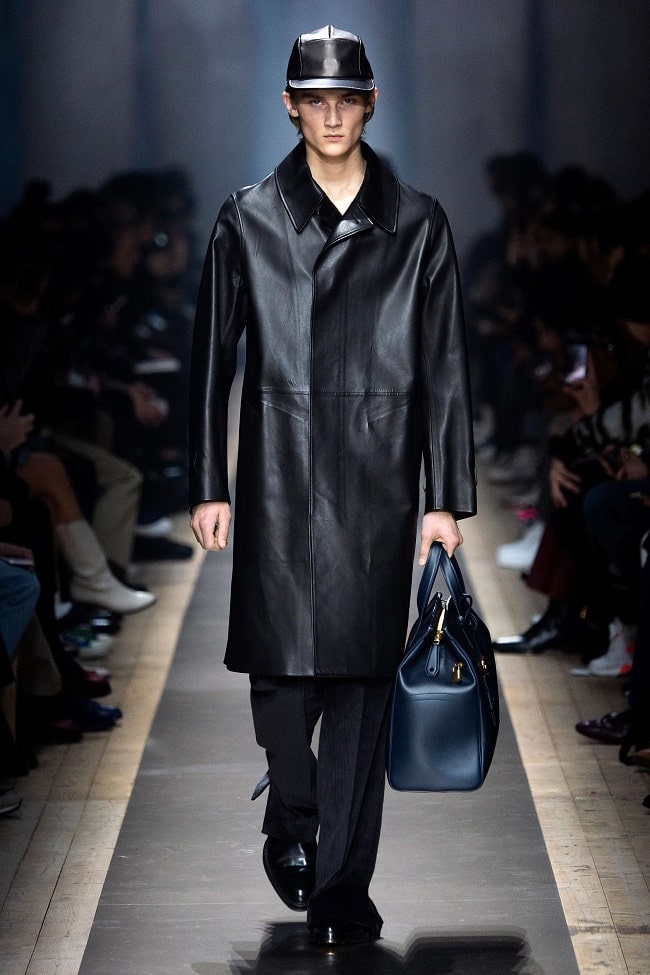 As a third archetype, leather comes with an air of fetishization and mystery – of control and power but also pushing boundaries and subverting social norms. Perhaps you’re picturing a leather daddy or dom, but whatever the symbol, his leather jacket symbolises a kind of perverted confidence and so-far-below-mainstream attitude you don’t know where he stands. He’s someone feared but observed with curiosity from a distance. For AW20, leather’s resurgence plays with all characters while simultaneously subverting expectations. For years, especially within the context of minimalist classic dressing, a leather jacket has been something every guy owns – or should own. It’s black or brown, perhaps with a moto or biker cut, and constructed with material meant to last. It’s one of those garments that’s always on our style radar but never actually trendy, unless runway presentations go all-out with spikes and patches in an homage or old-school, Suburbia-style punk. So, in a nutshell, it’s preposterous to say leather’s having its moment, when its been here and likely will always stick around in some form. Yet, its retooling and menswear’s revisit of it and synthetic counterparts are a product of the following factors. 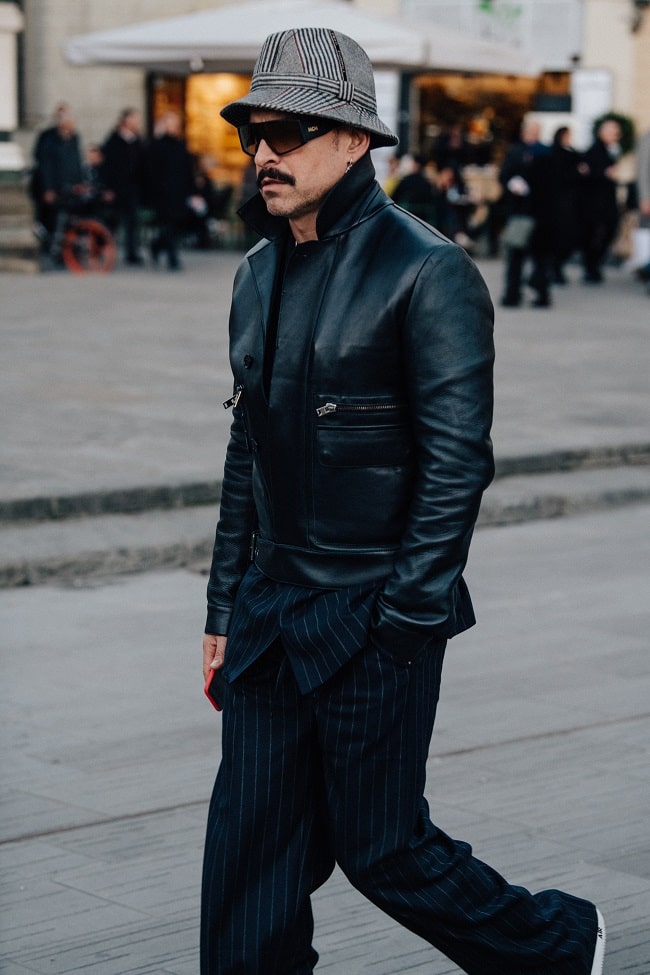 What’s old isn’t so much new as it is designers peering into their archival vaults and focusing more on classic, versatile staples in a more seasonless direction. Leather, like cardigans, denim, and double-breasted jackets, finds itself pulled into this spectrum because of its construction and what it signifies. Still, not everything presented is a literal been-there-done-that assortment. Instead, AW20’s presentations begin with the expected and distort it a bit. Cardigans fit wider and cast longer silhouettes. Suits, in sherbet pastels, hang off the wearer’s frame. And leather, within this pattern, extends from the collar to the ankle, from traditional browns and blacks to unexpected pinks and yellows. Ultimately, this approach and attitude exemplify the notion of making do with what you have while simultaneously making it your own. 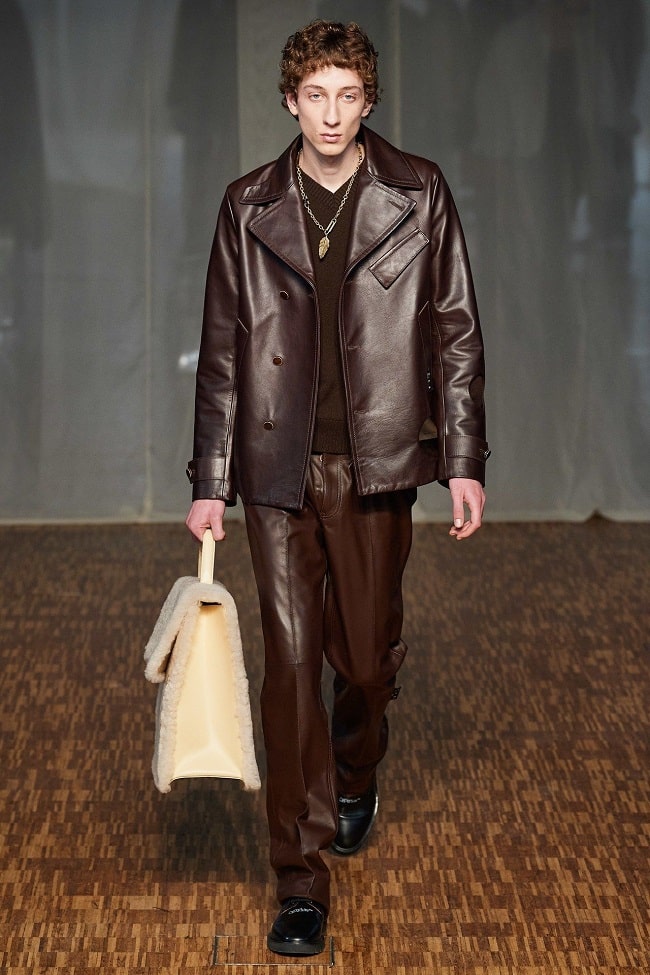 High fashion to High Street, Y2K fashion dominates in an ironic yet appreciative space, admired from a distance by teens and young adults who don’t remember (or didn’t live through) the skinny sunglasses and oversized bowler shirts the first time around. The approach, though, presents more of a fantastical view of this point in time, of long, leather Matrix-style trench coats and fully leather single-breasted, Gucci-wannabe suits that you could picture Will Ferrell and Chris Kattan wearing in A Night at the Roxbury. It’s a vision both extravagant and driven by pop culture that wants to reimagine this era as peak decadence and non-stop partying before the dot-com bubble and eventually the Great Recession changed economic reality as we know it. Although things might look better in skinny rose-coloured glasses, this last-grasp-as-prosperity concept emerges fully through leather trousers and trench coat – a partially impractical, gothic-fueled appropriation of the sensible and timeless. 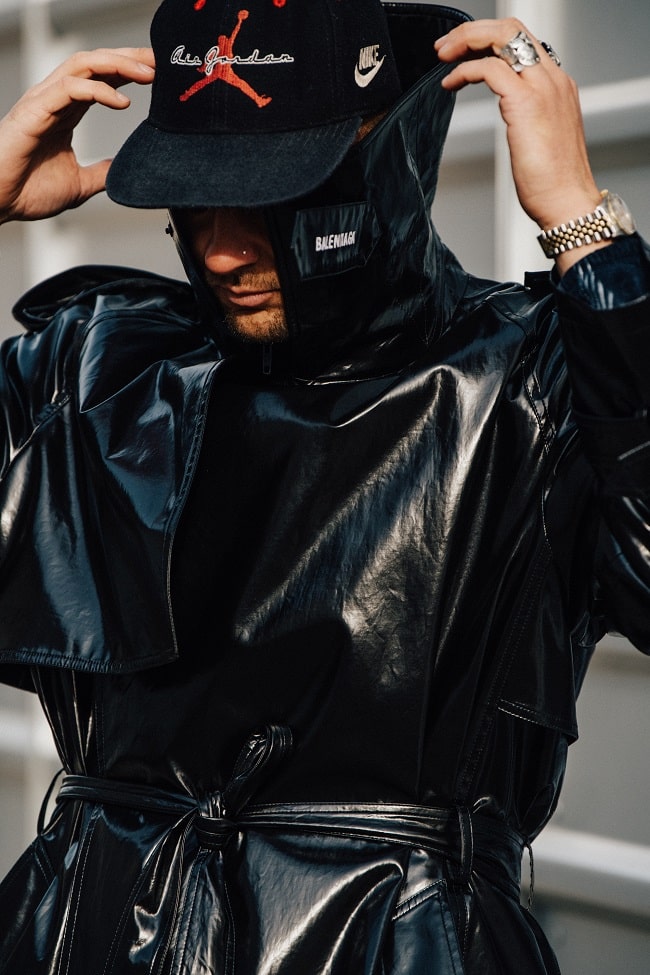 Fresh Interpretations of the Familiar

Amplified by Kanye West, who requested the British-Nigerian designer for his upcoming Gap collection, Mowalola Ogunlesi made a colourful splash this past year not with rayon or some kind of gossamer material sporting floral patterns but leather in hot pink and other neon ombre shades. Although we’ve seen the colours before in recent seasons, the artificial, almost contrived effect shrouds all expectations concerning leather usage. Yet, the result, while viewed through an almost ‘80s pop art perspective, shakes up expectations and breaks down the boundaries we associate with certain materials. Alyx’s SS21 presentation has a similar effect – albeit done with a shiny gloss finish that makes the material resemble its synthetic counterparts or has the effect of patent leather. 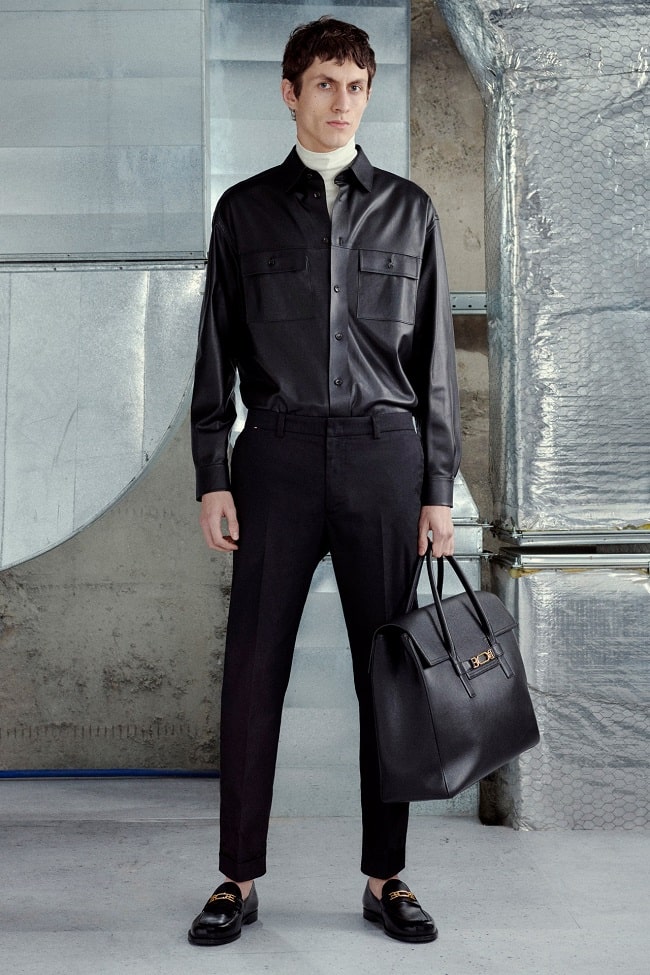 Spotted across multiple runway presentations, head-to-toe leather breaks down those preconceived notions even further. The symbol of rugged, traditional, if not rebellious masculinity erodes into socially unacceptable sin, of keeping the unspeakable behind closed doors and never hinting at it in public. At one end, the combination evokes stereotypical biker imagery – whether full-on Hells Angels or the practical rider standing by his leather trousers to avoid potential road rash. On the other, the pairing is full-on fetish and a touch Depeche Mode, coyly playing around with is-it-or-isn’t-it sexuality and gender tropes. In between exists slimmer leather trousers and a matching jacket – not skin tight, as if to imply intentional pain, nor too loose to appear shapeless and hidden in plain sight. In a season full of retreads and traditional silhouettes, the visual diverges from safe and familiar into edgier, intentionally ambiguous terrain. 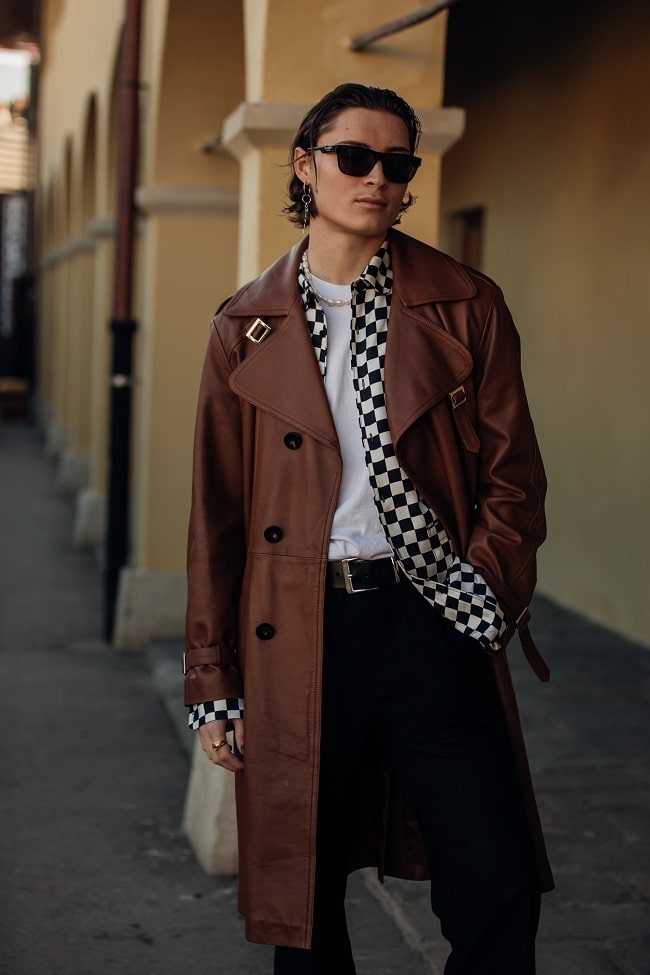