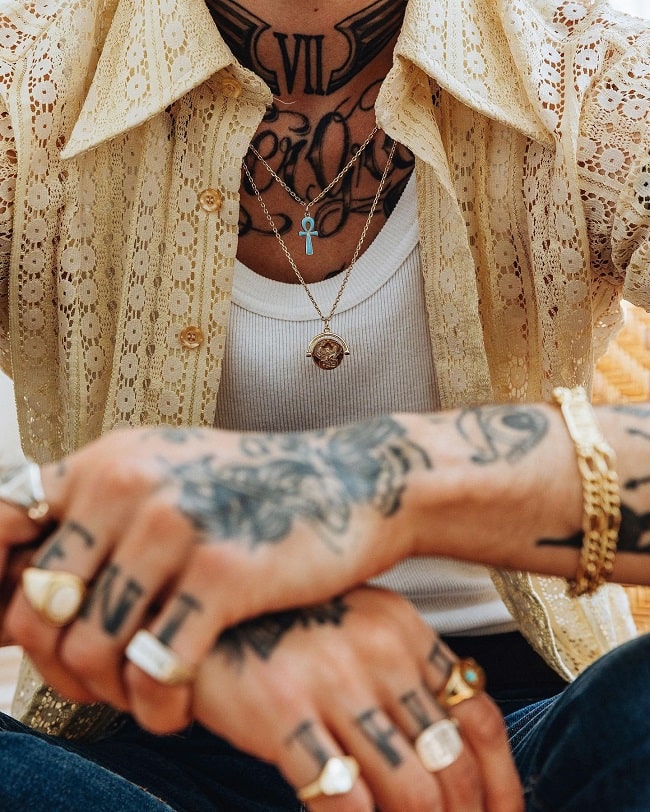 The red carpet’s a more accurate barometer for forecasting what the average man is interested in wearing, versus Fashion Week’s for-show presentations, which provide a framework but no practical applications. Among the signs is the appearance of men’s jewellery on such stars as Harry Styles, Shawn Mendes, A$AP Rocky, and even Spike Lee. While all, at least within their pop culture personas, present varying degrees of accessibility and potential for mimicry, the shift toward necklaces, brooches, and bracelets indicates that men’s jewellery has moved beyond the wedding ring-tie clip-cufflinks trifecta.

Although the concept of donning a jewelled bracelet for style or pinning something more than a boutonniere to your suit jacket seems foreign to many men in the present, jewellery-like adornments stretch back to the ancient Egyptians and have experienced popularity, as with all things fashion, in waves. In the more modern sense, a 2018 piece from the New York Times pinpointed the rise of men’s jewellery to the show-off cultural confluence of style and wealth on social media, where influencers have more of an organic rippling effect than, say, shilling detox tea. 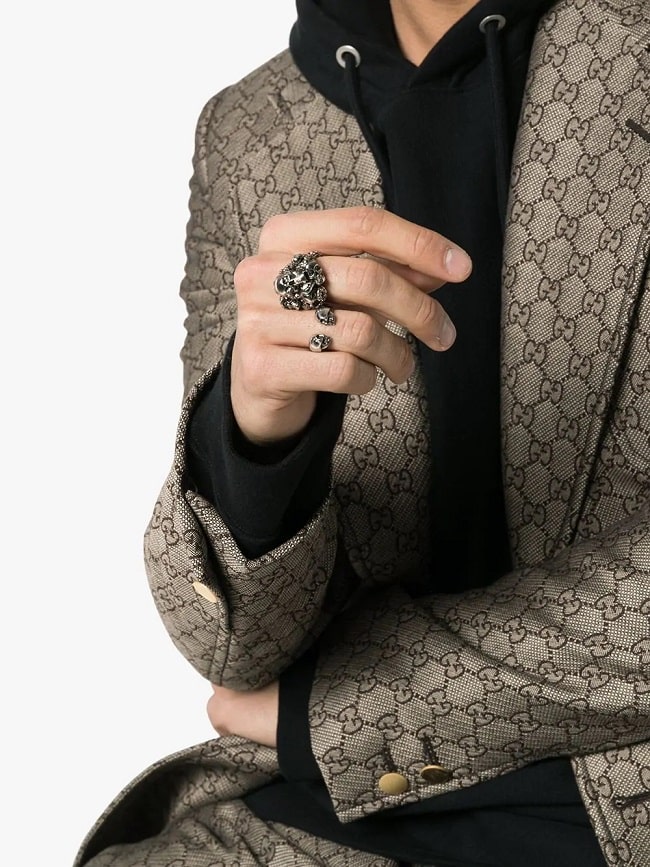 Still, the trend may be more cyclic, appearing on social media and amplified for maximalism via Fashion Weeks, where it then appears a few months later bigger and better on Instagram. Predictably, the fluid style-to-hypebeast brands of Gucci, Versace, Prada, and Maison Margiela have started incorporating more jewellery into their men’s collections, although it has yet to be the focal point. Trend pieces aside, numbers don’t lie. Euromonitor noticed a strong uptick in men’s jewellery sales between 2012 and 2017, where numbers increased from $4.3 billion to $5.3 billion. Although the men’s (and increasingly unisex) jewellery market makes up but a fraction of women’s sales, its popularity is essentially an intersection of factors: the individuality and rejection of gender conformity from Millennials and Gen Z; the increasing attention paid toward accessorising within menswear; and the quality of craftsmanship out there, delivering heritage appeal similar to the revival of automatic watches over the past decade. That said, if you’ve yet to explore beyond the minimalist style of your wedding or class ring, start with the following: 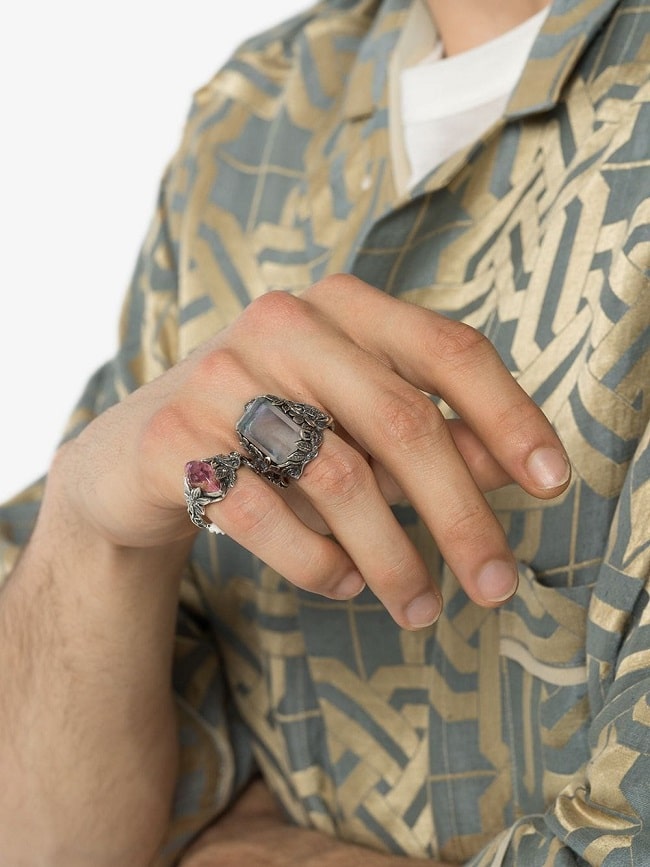 Rings make up the bulk and inarguably the largest-growing segment of the men’s jewellery market. In looking past the numbers, you can spot the pop culture impact, to a minor degree, with male characters in movies or on TV, sporting a few bands not for status but for style. Riverdale’s Jughead and Animal Kingdom’s Craig Cody both come to mind, and even going back a few years before men’s jewellery was even on the radar, Justified anti-hero Raylan Givens sported a horseshoe-shaped ring along with his Stetson. Rings tend to be the easiest pieces to deal with: for the most part, you slip them on, they stay in place, and they’re relatively out of the way. The trend builds on the appeal of a wedding ring – or that signet from your university graduation – but with a touch more individuality. The signet’s chunky, status-hinting design serves as a template for the time being, and most of what you’ll see out there is oversized, perhaps with a domed interior for comfort, or with engravings or a central stone. Keep in mind that while it’s not taboo to wear multiple rings on one hand, avoid strictly oversized silhouettes and instead mix band widths, thicknesses, and metals to break up a brass knuckles-esque appearance. 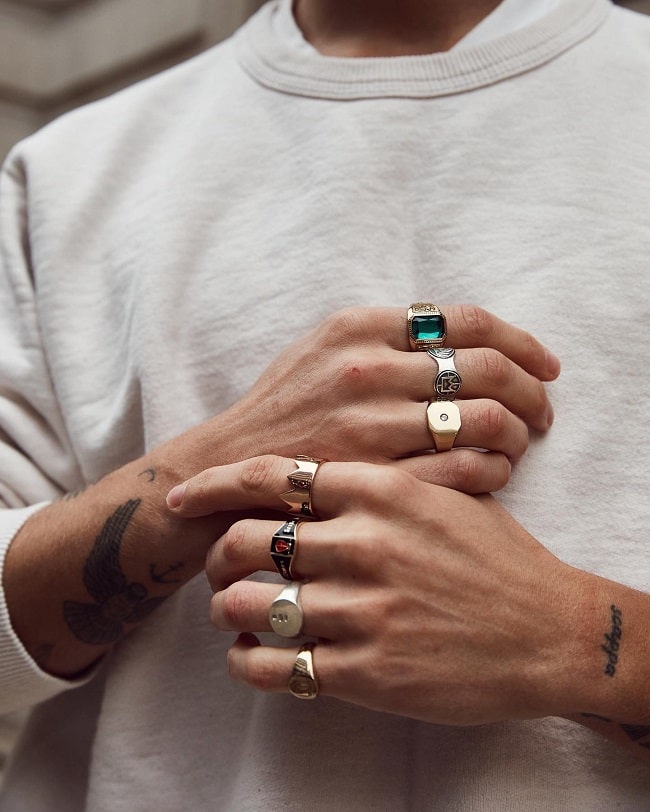 The ebb and flow of younger men’s fashion has brought necklace styles into the fold at points: puka shells of the ‘70s and again in the early ‘00s, shark teeth in the ‘80s, and gold chains from the ‘80s into the ‘90s, only to be replaced with platinum and diamonds by the ‘00s. Like rings, necklaces end up being easy to wear, and this effortlessness defines their return for 2019 into 2020. The pendant necklace, on a slim chain, presents distinctive simplicity and balance: it’s notable and adds personality without being overt and loud. In terms of wearing them, one is often never enough, and instead, these pendant necklaces tend to be layered, mixing metals, length, and imagery to avoid a lack of coherence. As well, there’s no point in donning a necklace if it will be hidden by your collar, so make sure your shirt gives your upper chest some space. Toward the more feminine end – and more into territory where ring trends have yet to truly tread – the men’s choker became a thing roughly four years ago, when Harry Styles was photographed for Another Man sporting a bondage-style leather band around his neck. Away from the frills and velvet you’ll spot amongst women’s chokers, styles for men present a straightforward appearance – leather or cloth, clean clines, and solid colour that comes off as subversive for its innate gender-bending nature. 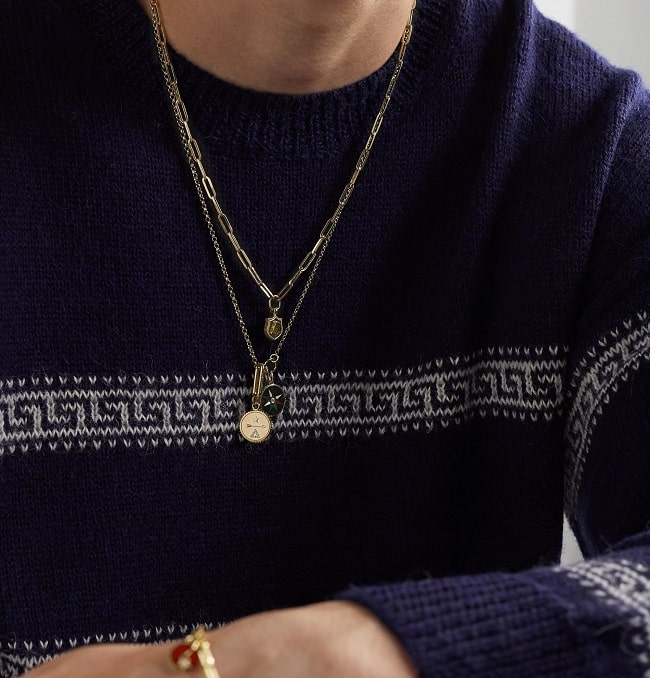 Bracelets mimic the trends we’re seeing among men’s necklaces, but exist on a smaller, less conspicuous scale. Although you might spot woven friendship bracelet styles among stoner or crunchy granola types, the current surge comes more from metal – think solid cuffs and metal chains – to leather bands not dissimilar to Harry Styles’ choker. Here, though, while a single bracelet does its job in terms of distinctiveness, layers make more of an impact. Taking a similar approach, mix the metals and widths, but limit statement details like stones, orbs, and etchings. 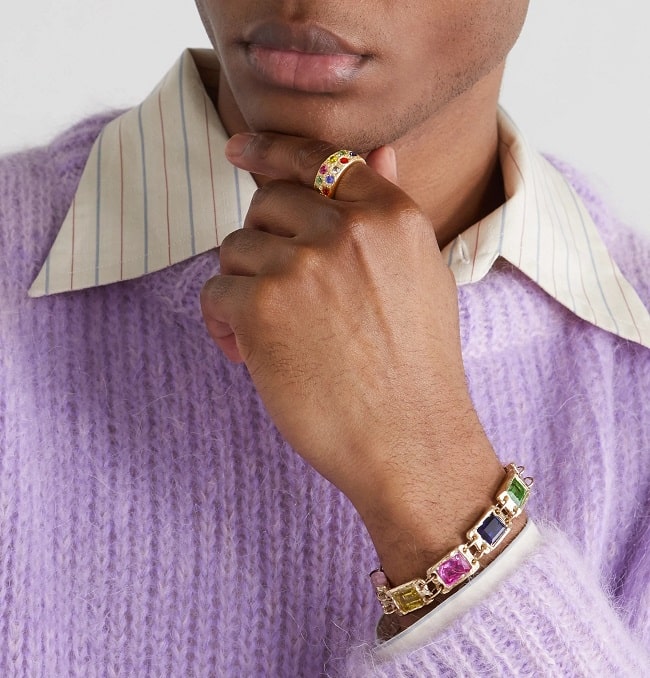 How do you dress up a standard navy or black suit jacket? You might be tempted to select something with a texture or embroidery, but over the past two years, red carpet appearances from Timothée Chalamet, Stephan James, Billy Porter, and Joe Jonas have taught us that you can do more with less. Particularly, a typical two-piece, single-breasted suit is easily dressed up with a brooch – feathered, colourful, bejewelled, it’s all about the statement and adapting tradition for the occasion. 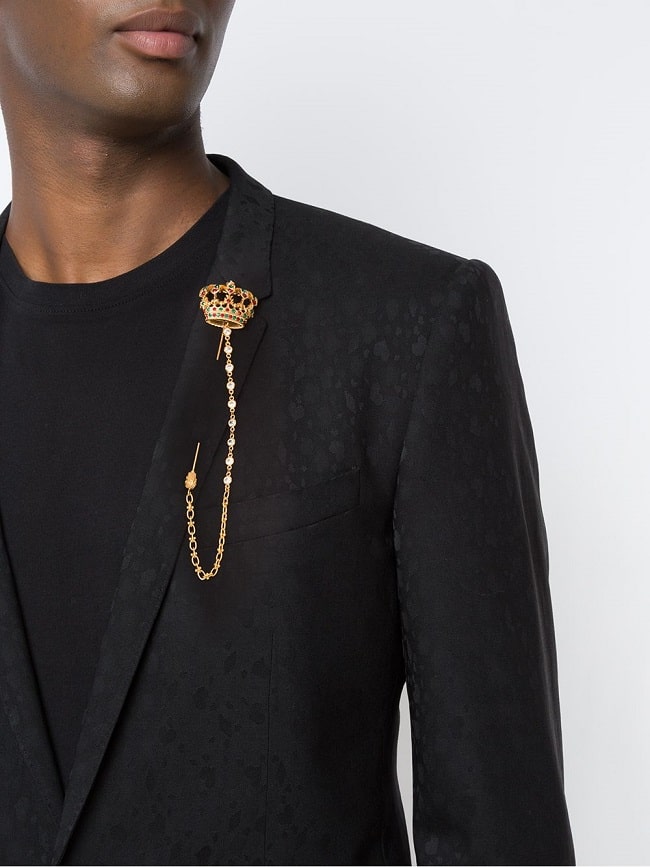 Especially in the US, pearls have a reputation as mid-century housewife jewellery. Although the ’80s brought them back as a high-dollar heritage item sought out by the rich and famous, their staleness pushed them out of sight and out of mind by the ‘90s, until a few stars started showing up to major events with them: Shawn Mendes at the American Music Awards in 2019, A$AP Rocky at SS19 Fashion Week, always-ahead-of-the-trend Pharrell Williams, and, predictably, Harry Styles at the 2019 Met Gala. The approach is different this time around, though: There’s minimal symmetry dangling along the collarbone. Pearls simply bring a new texture into layers of necklaces, or may be worn long down the front of a suit, like a softer, subtler gold chain. As well, not everything’s sparking white and precise: Just as with diamonds, subtle pink and grey hues, along with more elliptical textures, break down their 20th century bush league conservative status.