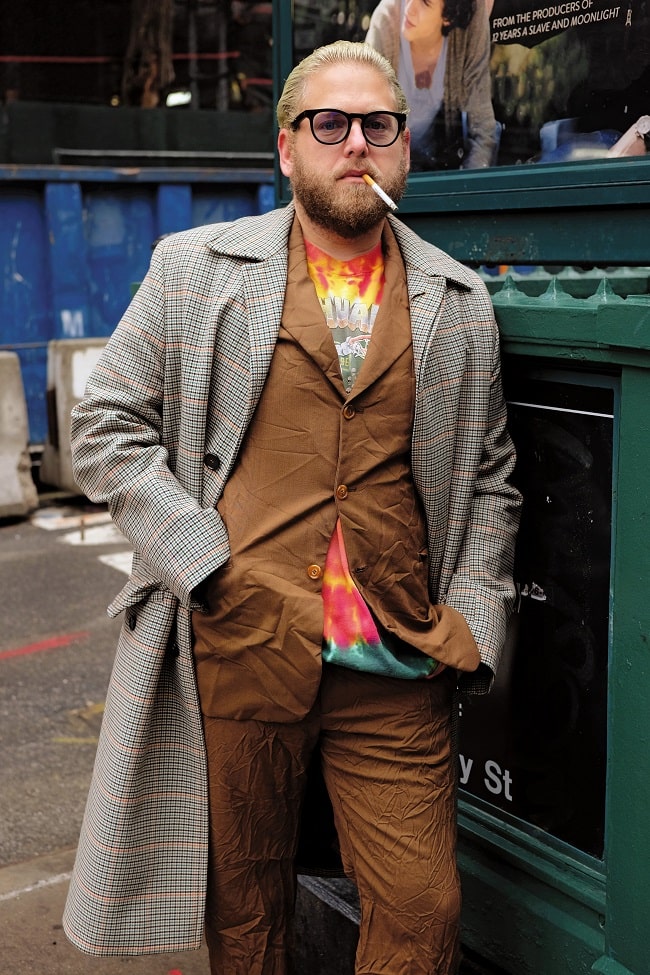 Some say that the menswear icon no longer exists – or that he’s simply a figment of nostalgia, dredged up from a time period, captured by Hollywood, where men were men and clothing, employment, and social roles were strictly demarcated along gender lines. Names like Steve McQueen, Marlon Brando, Gary Cooper, Paul Newman, James Dean, and Miles Davis get thrown around as paradigms of classic men’s style, and into the more current period, “icon” gets lobbed at a wider swath of individuals all symbolic of the broader diversity of choices out there. Some are relatively safe – think David Beckham or Jay-Z on and off the red carpet – or film inspired, like Ryan Gosling’s now-classic Drive digs.

From here, though, the modern definition of an icon diverges away from the predictable. The past decade or so has seen streetwear elevated out of the underground, and we admire those who can do it from afar – be it through Sartorialist-esque street-style photography that vaults the average individual above ordinary at least for a moment, the athleisure effortlessness of someone like Frank Ocean or Drake, Instagram influencers, or the surprisingly hypebeasty looks of John Mayer. 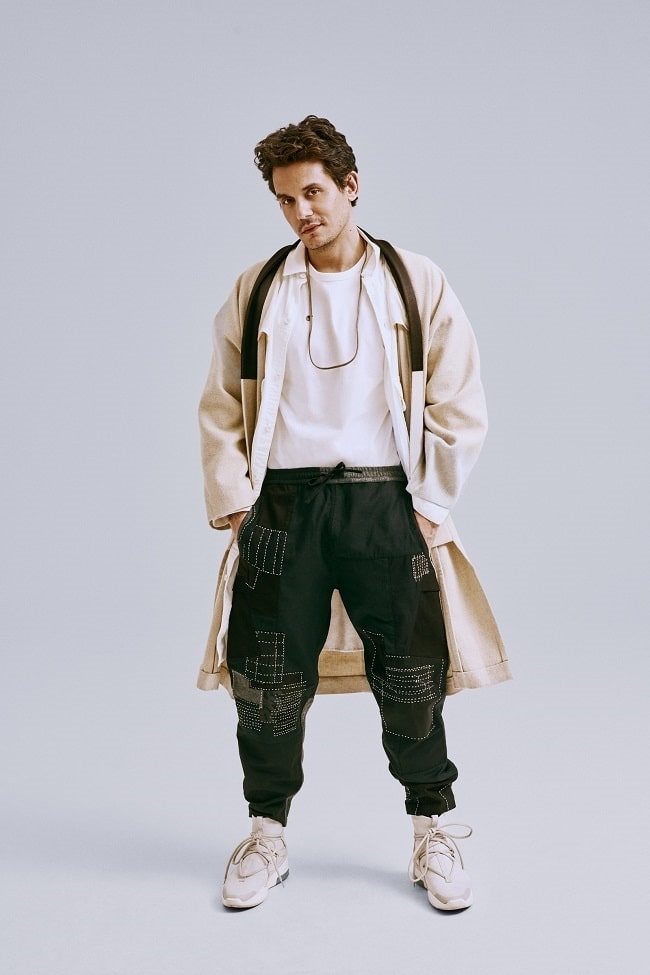 Then, in another direction, we’ve seen the gender fluid icon emerge: He’s not so much a man in a dress but rather someone who effortlessly incorporates femininity within the context of masculinity. One doesn’t replace the other, and instead, both so-called diametrically opposed sides coexist in a strange kind of balance. Today, someone like Harry Styles or Young Thug or, in a lesser capacity, Jaden Smith occupies this growing space that stands on a few decades of more overt, meant-to-shock gender-bending from David Bowie, Freddie Mercury, and Kurt Cobain. Yet, the sources for who and what a menswear icon is have become predictable. We turn to pop culture or, as an off shoot, the red carpet and base influence from there. He’s someone whose personal fashion and lifestyle we can look up to, find aspirational, and, to a lesser degree, take direction from. But, as a counterbalance to the influence of Steve McQueen, Ryan Gosling, or Harry Styles, a few less-predictable sources have found semi-icon status. 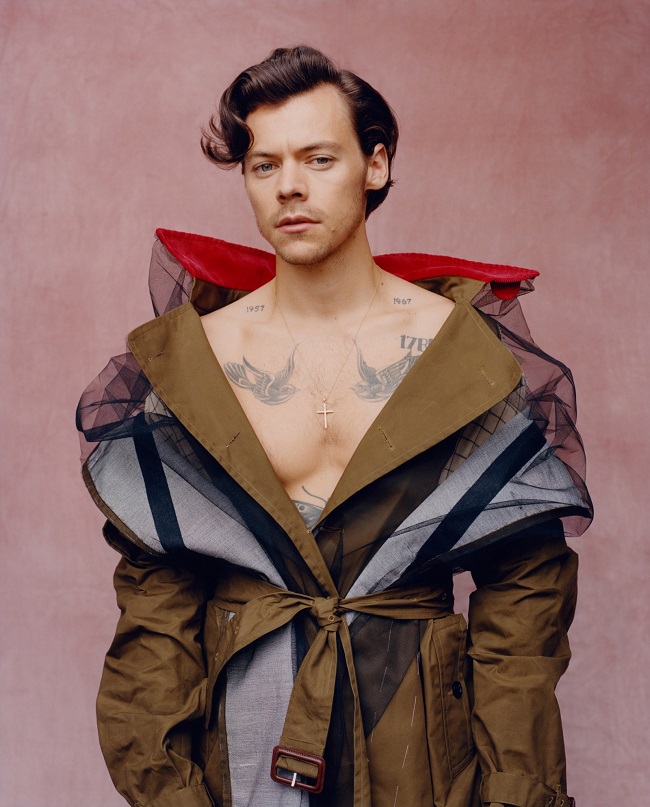 No one’s personally going to call Tintin a style icon. That could stem from the embarrassment of finding inspiration from a comic book – although graphic novels have abated the belief that comics are strictly for children – or the greater attention paid to the Belgian series’ problematic, socially and culturally dated aspects. Rather, Tintin symbolises everything a modern man wishes he could acquire in the present while being set in almost a boundary-less nostalgic world: an exciting job as a reporter that allows him to travel the globe, new adventures in exciting destinations off the continent, and, for menswear’s sake, a wardrobe of timeless, nautical-inflected threads that have outlasted the comic’s clearly mid-century setting. 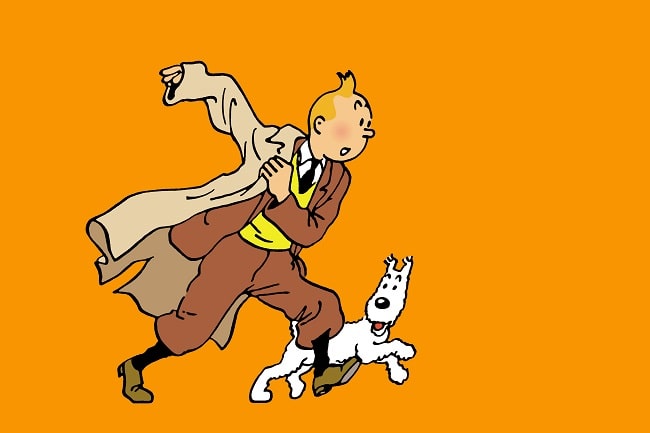 Over the past few years, Babar the elephant has started showing up in menswear collections. More prominently, Harry Styles sported a cardigan featuring the children’s book character at a Spotify listening session in December 2019. However, fascination with Babar, at least among fashion brands, dates back to 2013, when Soulland introduced a collection prominently incorporating the character. Lanvin followed in their footsteps with a series of tees and high-end knits utilising Babar’s likeness. In 2020, Rowing Blazers took a more pervasive approach, through a collection of Babar-inspired hats, trousers, rugby shirts, and suits. Why Babar and why now? The appeal is much like Tintin’s but without the problematic colonialist context. Millennials and a few generations of children before grew up with the book series, whether in the original French or translated to English, and eventually a movie and cartoon series. Similar to Tintin, the locale – jungle to glamorous French city strongly inspired by Paris – epitomises aspiration, as does Babar’s wardrobe of tailored suits. At the same time, the story itself is a fish-out-of-water tale – originating with sorrow and ending with luxury – that takes the reader out of reality for a moment. 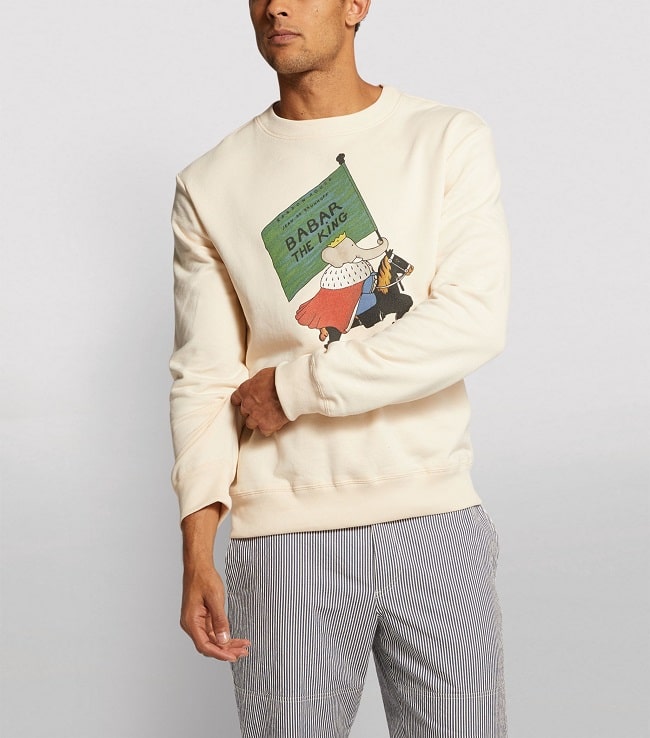 Talk about the Royals these days, and the popular conversation generally shifts to William and Kate or Harry and Meghan. Yet, setting an example for sartorial pragmatism decades ago, Prince Charles not only exemplifies British heritage style, but his approach to his wardrobe is the paradigm of minimalist menswear and, to some extent, sustainability. The heir to the throne supposedly only owns two coats – albeit two well-tailored ones made of tweed and camel hair – and has taken this approach for over the past 30 years. His methods have since manifested as a collection with Yoox Net-a-Porter. Titled Modern Artisan, it consists of 18, sustainably made garments crafted with input from artisans from the Prince’s own foundation and from Politecnico di Milano, one of Italy’s leading design schools, and is manufactured in the UK. Taking after his own choices, the collection focuses on classic silhouettes constructed with high-quality materials like cashmere, wool, and organic cotton. 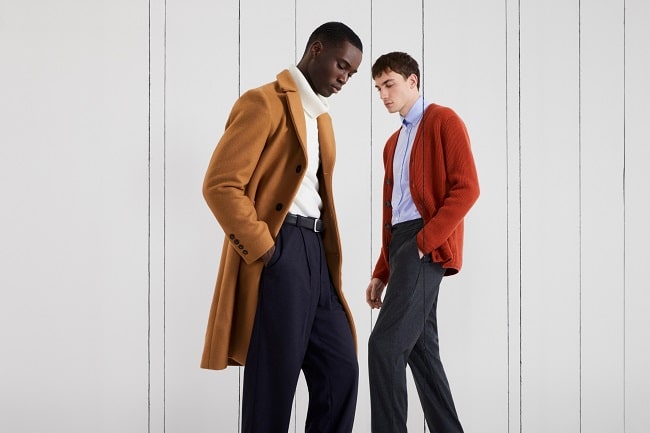 Another inspiration stemming from nostalgia, the Peanuts characters have low-key infiltrated menswear. They’ve been spotted in capsule collections for streetwear brands like HUF, BAPE, and Vans, in higher-end fare from Soulland, Marc Jacobs, and Todd Snyder, in classic “Americana” brands like Levi’s and Champion, and in accessories collections from Goyard, Timex, and Omega. Started over 70 years ago, Charles M. Schulz’s weekly comic strip that’s since spawned multiple holiday specials doesn’t seem like fodder for fashion inspiration: Characters frequently behave awkwardly, if not clumsily or rudely, and no one makes particularly exceptional style choices. Yet, in looping back to nostalgia, Peanuts is essentially a world without adults – in the holiday specials, the teacher’s voice is nothing more than a trombone – and one where, due to characters never ageing, youthful exuberance, freedom, creativity, and embarrassment never give way to affected adolescent cynicism or the monotony of adulthood. Strictly thinking about fashion, Peanuts graphic tees were also relatively prevalent for parts of the ‘80s and ‘90s, and current collections revisit these often unstylish, picked-it-up-at-a-T-shirt-shop choices that reflect the shapelessness of the decades’ more utilitarian, almost dad fashion-esque options. 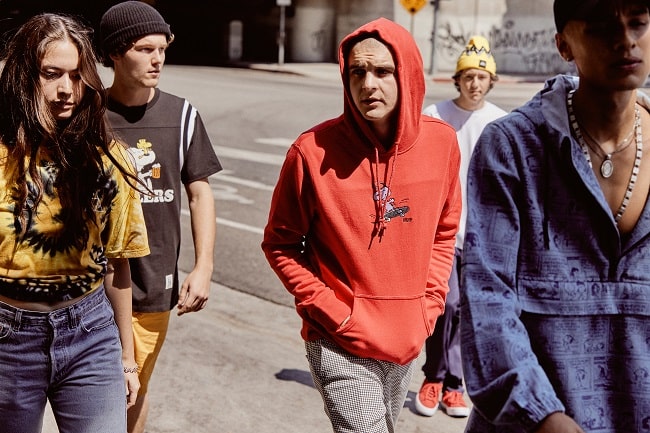 Career wise, Jonah Hill has come a long way since Superbad, the Judd Apatow-directed movie that launched him above bit parts. Still, even after close to 14 years of roles, including two with Leonardo DiCaprio, and directing his own film, you still picture Hill as a poorly dressed, somewhat nerdy high school student who can’t select clothes for his body type. Instead, his street style gives influencers a run for their money, and it’s clear that Mid ‘90s was more than an elegy for his youth. Hill’s style choices out of character veer more toward skate fare without being loudly branded head to toe, and at times, he dabbles with luxury menswear brands like Gucci and Saint Laurent without taking the Harry Styles route. Instead, Hill plays a tough hand that’s understatedly aspirational: high-end but not obnoxious about it, well fitted but not tailored, nostalgic without delivering an uninspired ‘90s throwback, and delivering enough clout for Palace to appoint him brand spokesman. 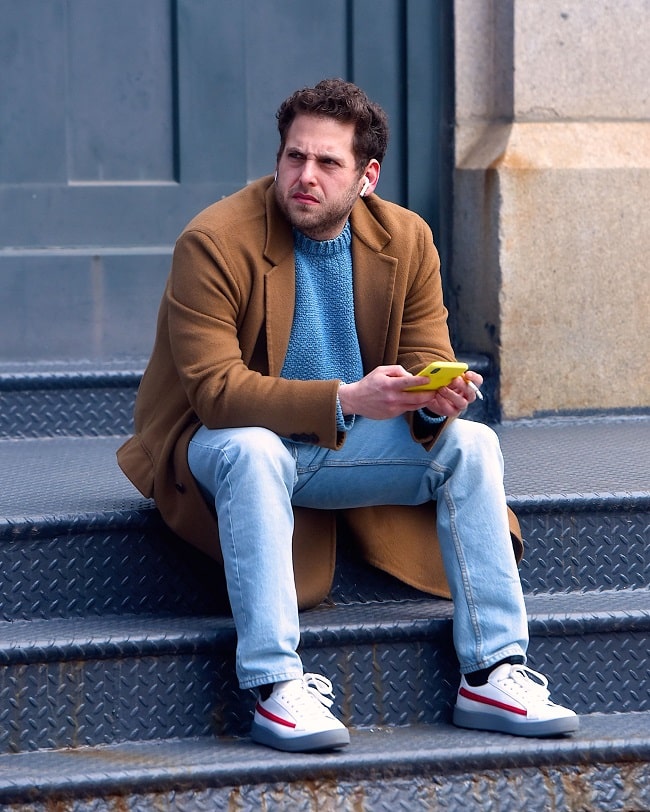 Matthew Perry himself isn’t so much the icon as is his ‘90s sitcom character, initially styled to blend into the background so his and other characters’ jokes would take the floor. Yet, in a normcore world of dad fashion, revived ‘90s sportswear, and preppy revisited through a streetwear lens, Chandler’s intentionally unexceptional choices have served as a template for calculatedly blasé style. In the wrong hands, Chandler would simply come off as nothing more than a bro of the period, with his grab-it-and-go athletic shoes, sweatshirts, chinos, and Levi’s 501s not far removed from what Jerry Seinfeld was wearing an hour earlier. It’s ‘90s jock without the letterman jacket, young-adult-on-a-budget with specifically relaxed tastes, and, if you consider his character arc from business job into marriage, a symbol of stability that veers away from tired dad tropes. 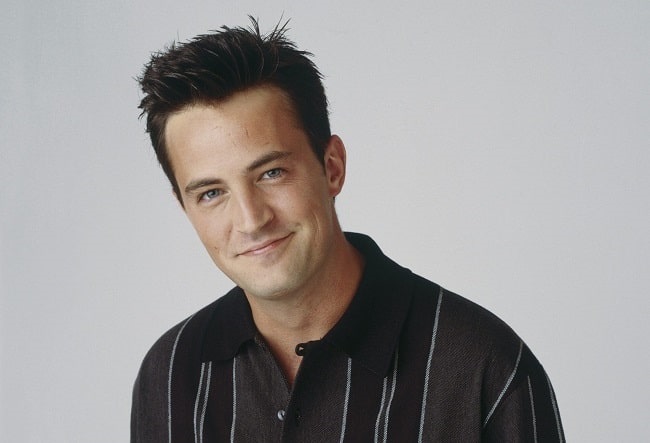 Any nautical-themed collection or a concept about the beauty inherent in youthful insouciance ultimately goes back to Death in Venice – more so the scene and visuals of Luchino Visconti’s 1971 film than the Thomas Mann 1912 novella, its source material. While stunning in a classic sense, Death in Venice is set within the context of cholera sweeping through the Italian city, not far removed from our current time. Here, protagonist Gustav von Aschenbach wanders through the city’s deserted streets in pursuit of Tadzio, and at this point, the cloistered environment of the hotel and seaside dissipate into a sense of impending doom, almost hinted at by the city’s grimy character. And, in examining this particular relationship, the novella and film to a lesser degree focus on a middle-aged man pining after an adolescent: the Tadzio on the page remains oblivious, while on film, the Polish royal acknowledges Aschenbach’s admiration with a few glances. As the other side of this coin, the film further depicts the grotesqueness some will go to appear youthful and hence more desirable to fulfil their yearnings. 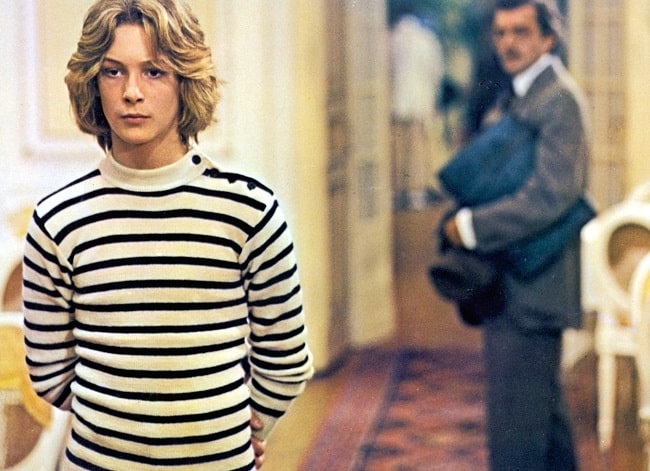