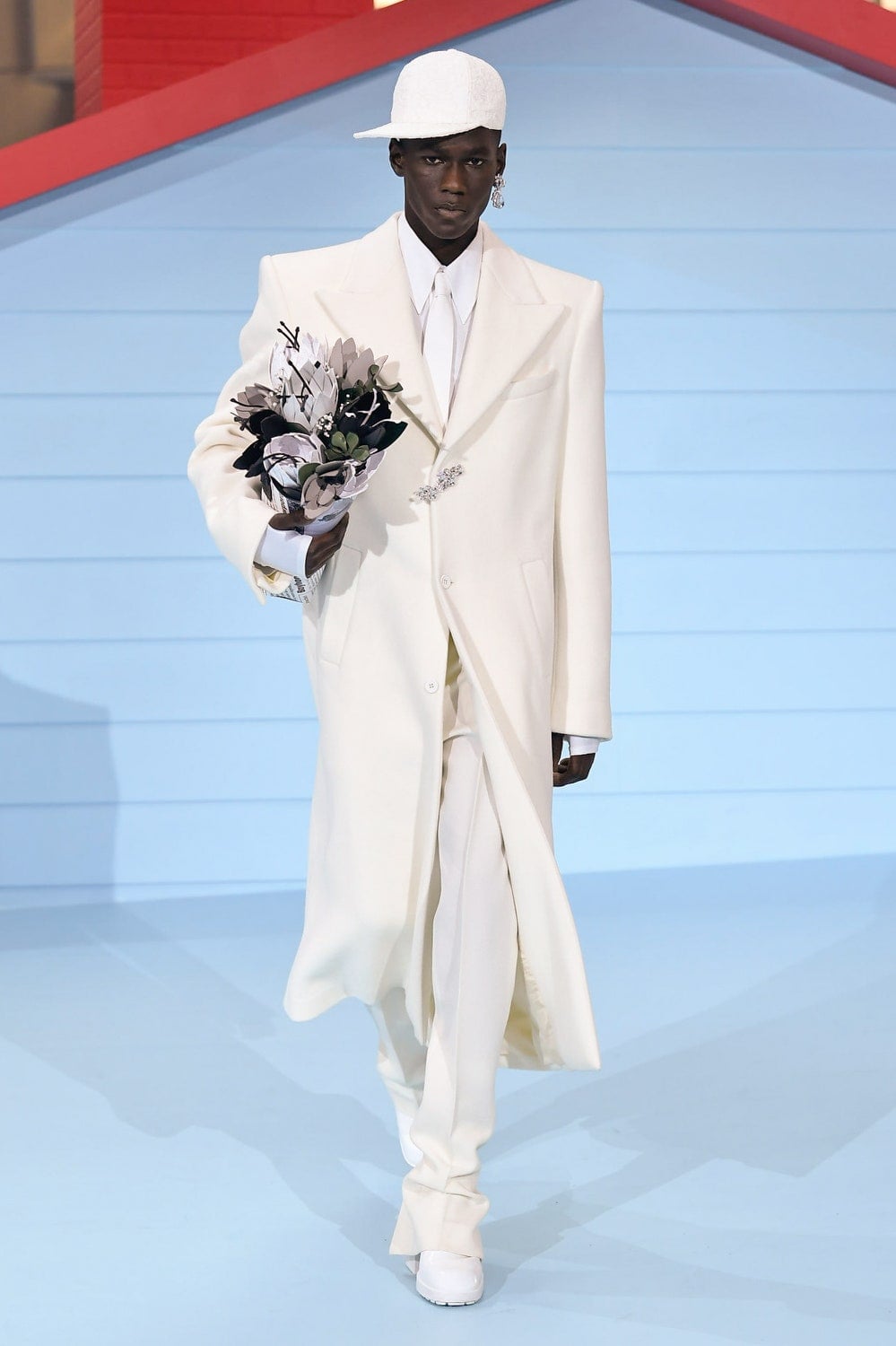 In a moving tribute to the late Virgil Abloh, Louis Vuitton celebrates the legendary creative’s final Men’s collection at Paris Fashion Week Autumn/Winter 2022. After a private, years-long battle with cancer, Virgil Abloh passed away in November 2021. His last collection, presented at Le Carreau du Temple today, was said to be almost complete by the time of his passing.

The fashion house had been hinting at the theme of its final collection with Abloh’s Artistic Direction across its social media accounts over the past 48 hours, having posted a selection of teaser accessory shots set in moody, surrealist backdrops. Each of the early-preview pieces were showcased against cloudy, blue-yellow skies with accessories suspended above a sandy-grey mirage. Eager onlookers glimpsed paint-pot satchels, a checkerboard holdall and a surrealist twist on the classic LV trunk, formed in a distinctly warped, Dali-esque shape. 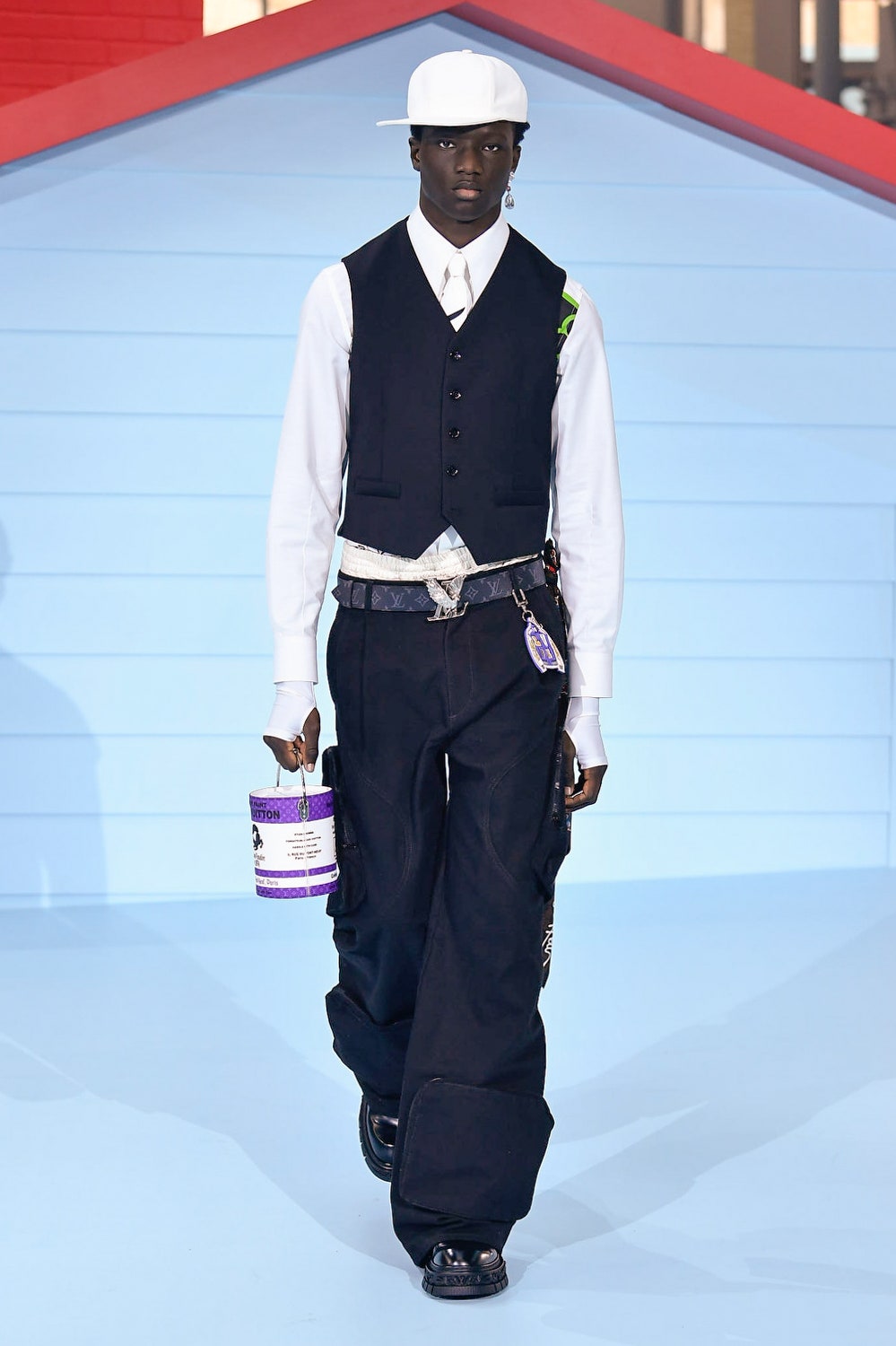 The early-release images promised a line with a strong surrealist theme and the full runway presentation did not fall short.

For digital viewers, the show opened with a ‘cinematic prelude’ to the show, similar to the visual released one hour before on social. A cracked eggshell; metallic spheres; a checkerboard floor; unmistakable tokens of Abloh’s artistic inspiration for his last collection with Vuitton.

The show opened with an elevated white table, lined with string and brass musicians, setting an ethereal soundscape for the show in the grand hall of Le Carreau du Temple. A red-roofed centre piece and white interior sets dotted across the runway were a nod to Abloh’s previously used house motif.

As the sound of strings filled the hall, dancers dropped from a white staircase onto a trampoline, rebounding and moonwalking on and off the stairs in a perfectly fluid dream-like sequence. 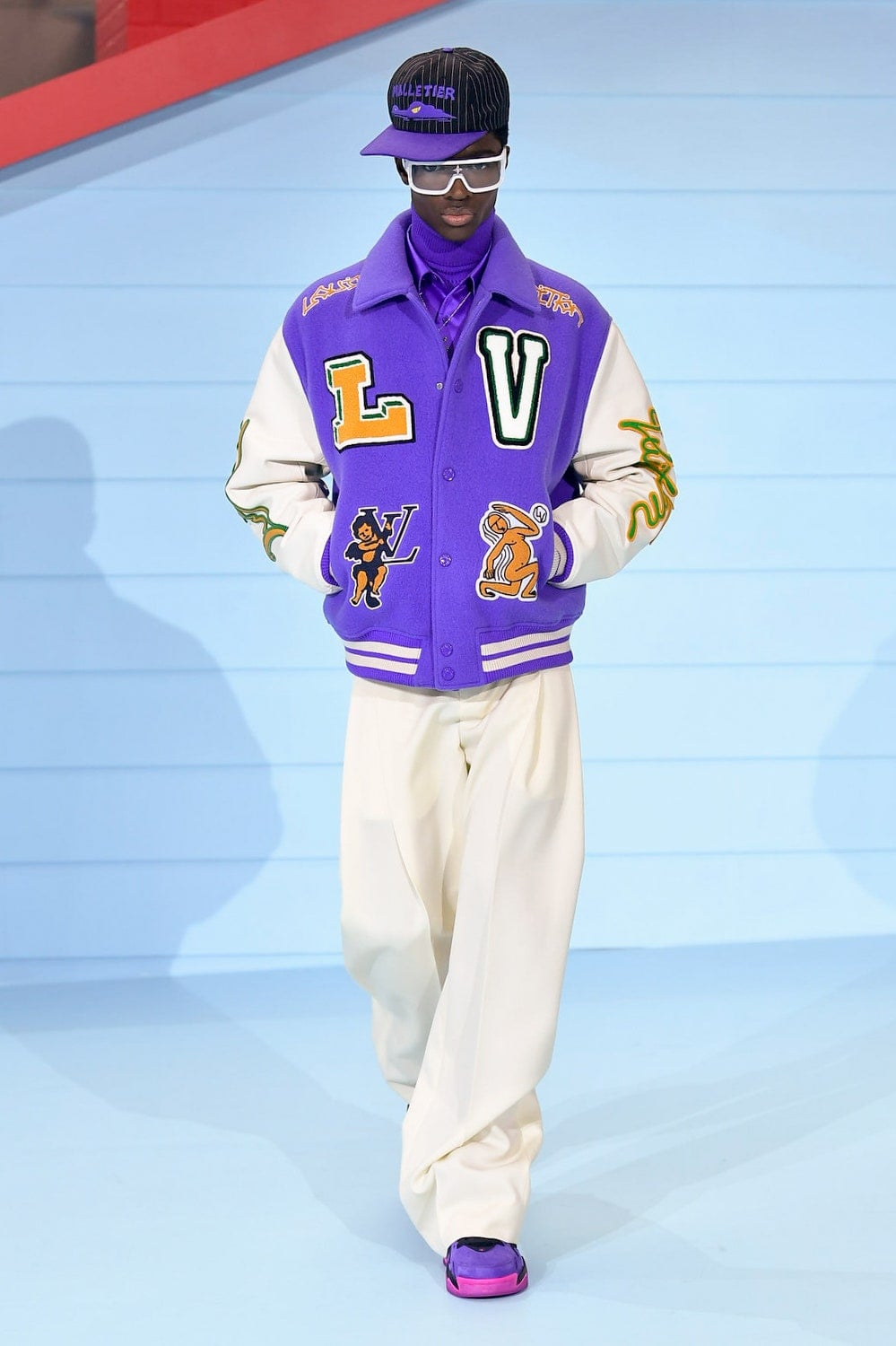 The collection opened with clean, black silhouettes and tailoring with rounded volume in the front and shoulders. Suits were paired with Abloh’s signature souped-up shoes, with platformed boots featuring alongside his classic sneaker looks.

The elegant opening look was followed by a more playful array of cream-sequined snapbacks, sportwear with cartoon detailing and standout jewel-toned and glittering suits. A top-to-toe purple satin look complete with satin quilted bag and platform boots was the pièce de resistance, but a pearlescent blue suit jacket and shorts set could not go without mention.

This is not Abloh’s first foray into a wearable take on surrealism. The late creative was known to be a fan of the Belgian surrealist, Magritte. Abloh’s AW20 show for Louis Vuitton at the Jardin des Tuileries in Paris was strongly inspired by Magritte’s blue sky and fluffy cloud motif. 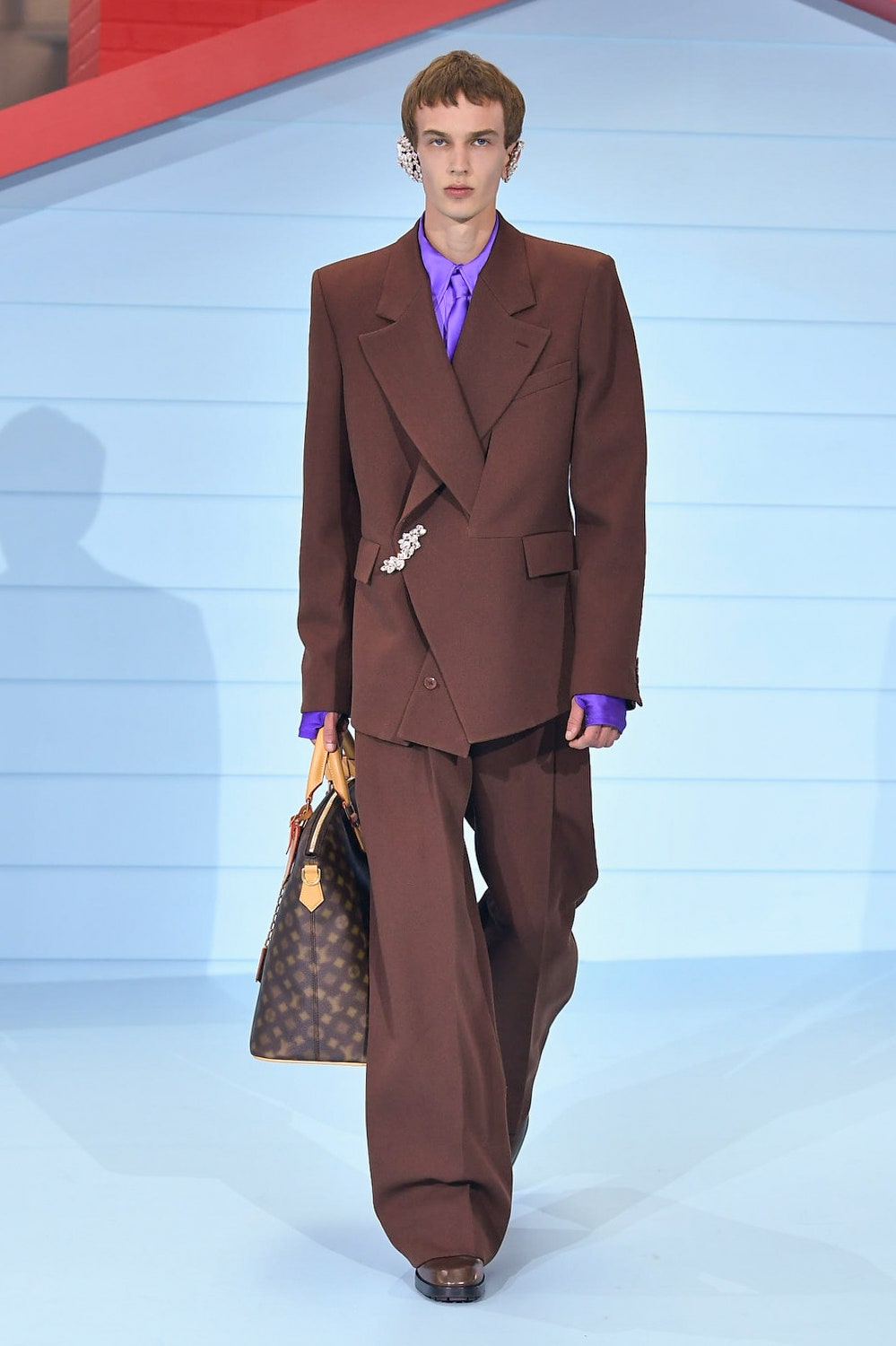 Throughout, the show was threaded with Abloh’s commitment to creativity across the spectrum of the arts. Musicians, dancers, performers and models occupied the space, moving organically from one sequence to the next while maintaining a sense that every move, placement and pause was conducted exactly as intended, like a surrealist ballet of sorts.

The show culminated in the creative team joining the fantastic display at the centre of Le Carreau du Temple. The team were greeted by a standing ovation from in-person attendees.

It was hard not to look at the ensemble of creatives and be moved by the white-winged model on the outskirts of the group, serving as a moving visual of the gravity and legacy of Virgil Abloh’s impact on this iconic French fashion house.

Following the runway tribute to the designer’s final collection in Paris, it will take temporary residency in SoHo, New York, later this month. Accompanying the collection will be a 10-story mural of Abloh near Louis Vuitton’s flagship 5th Avenue store. 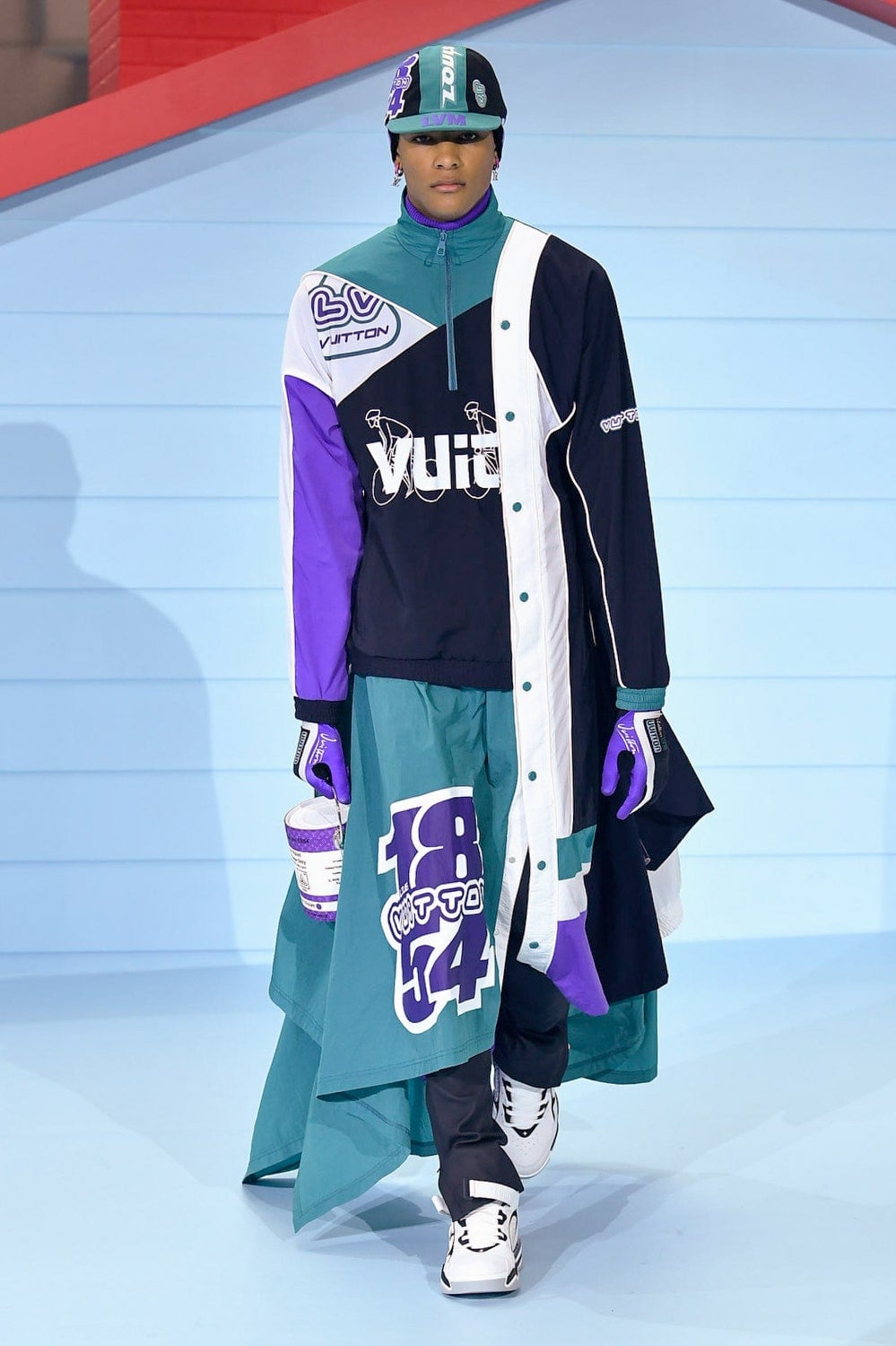 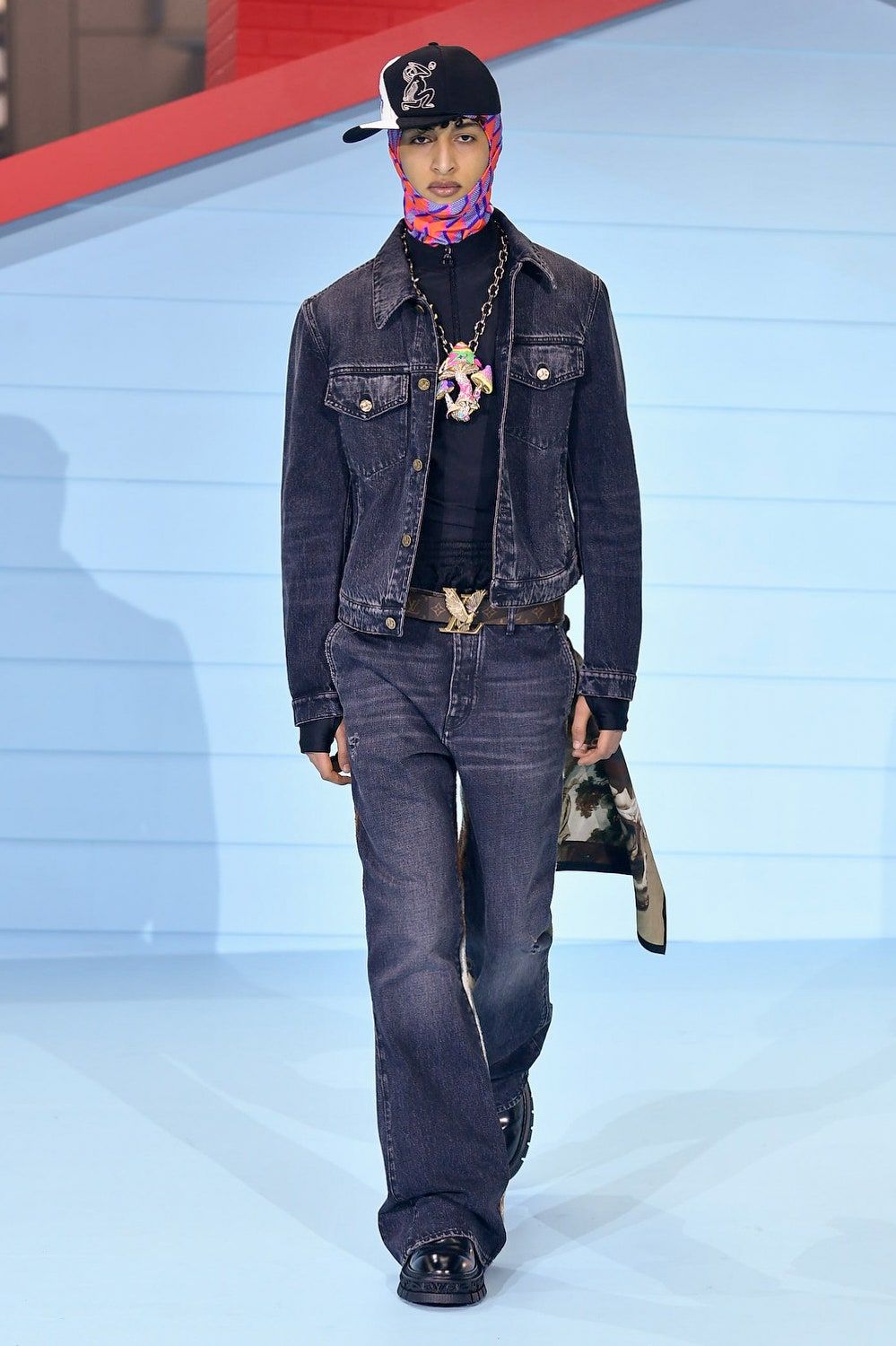 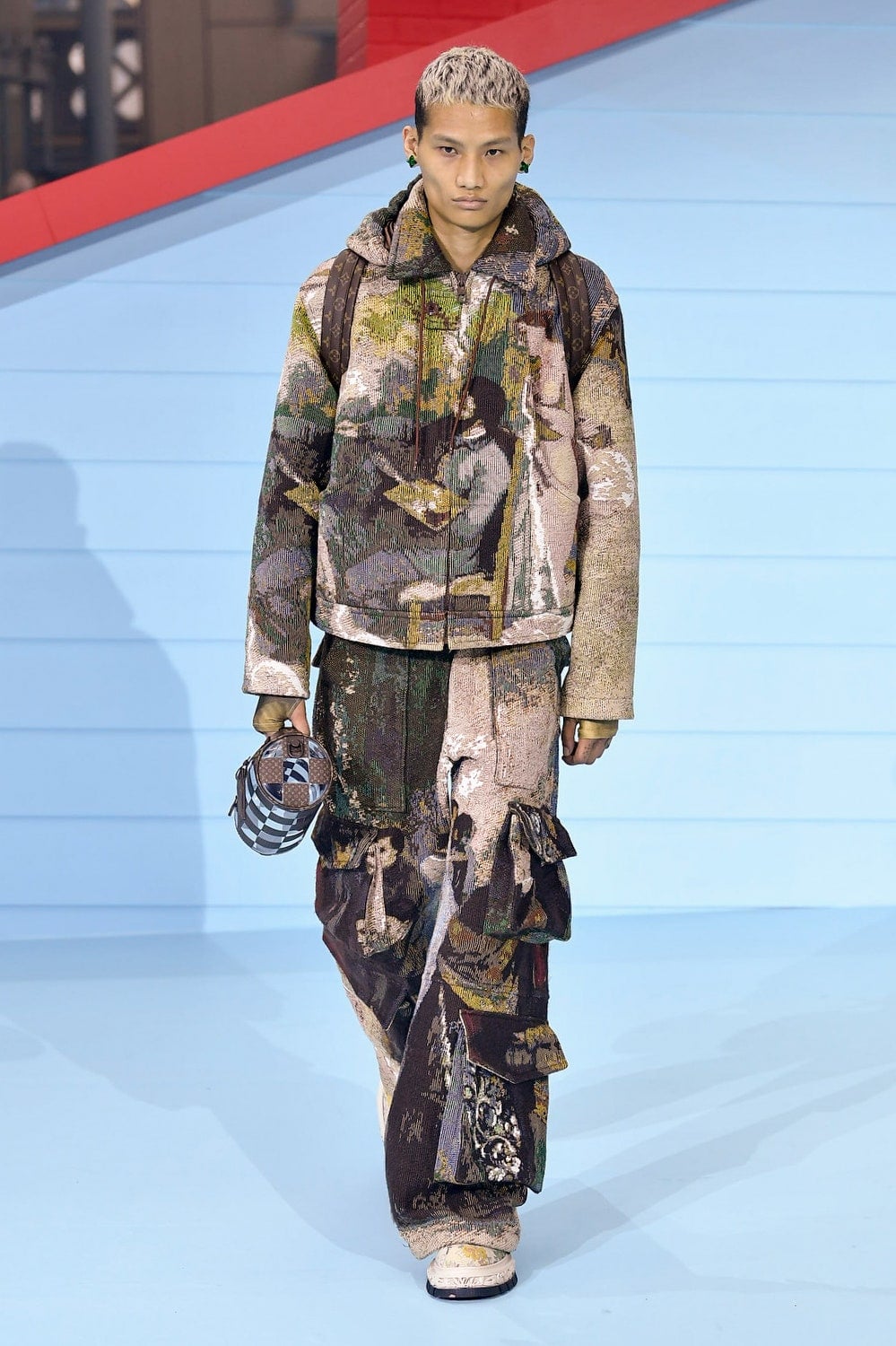 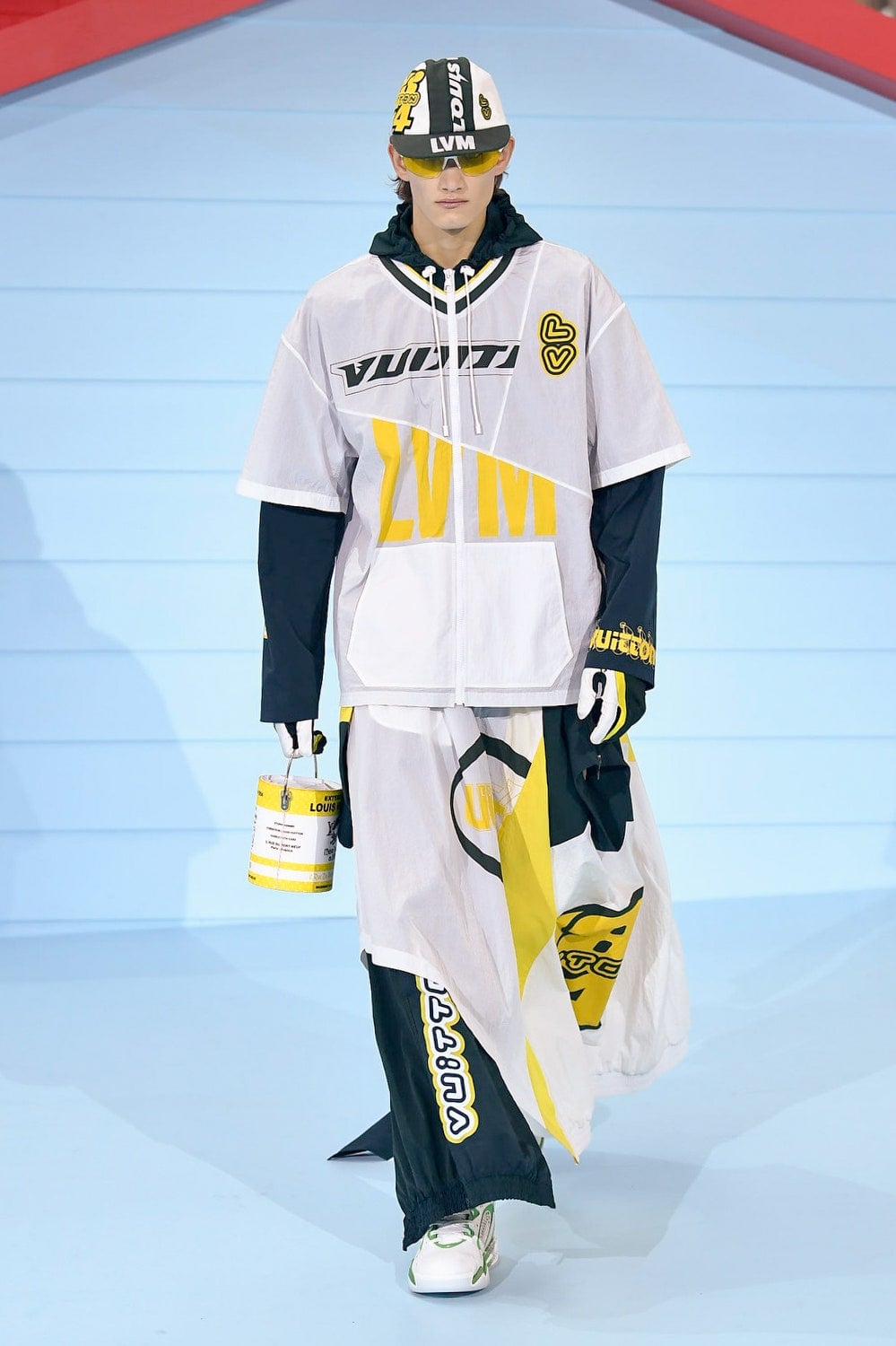 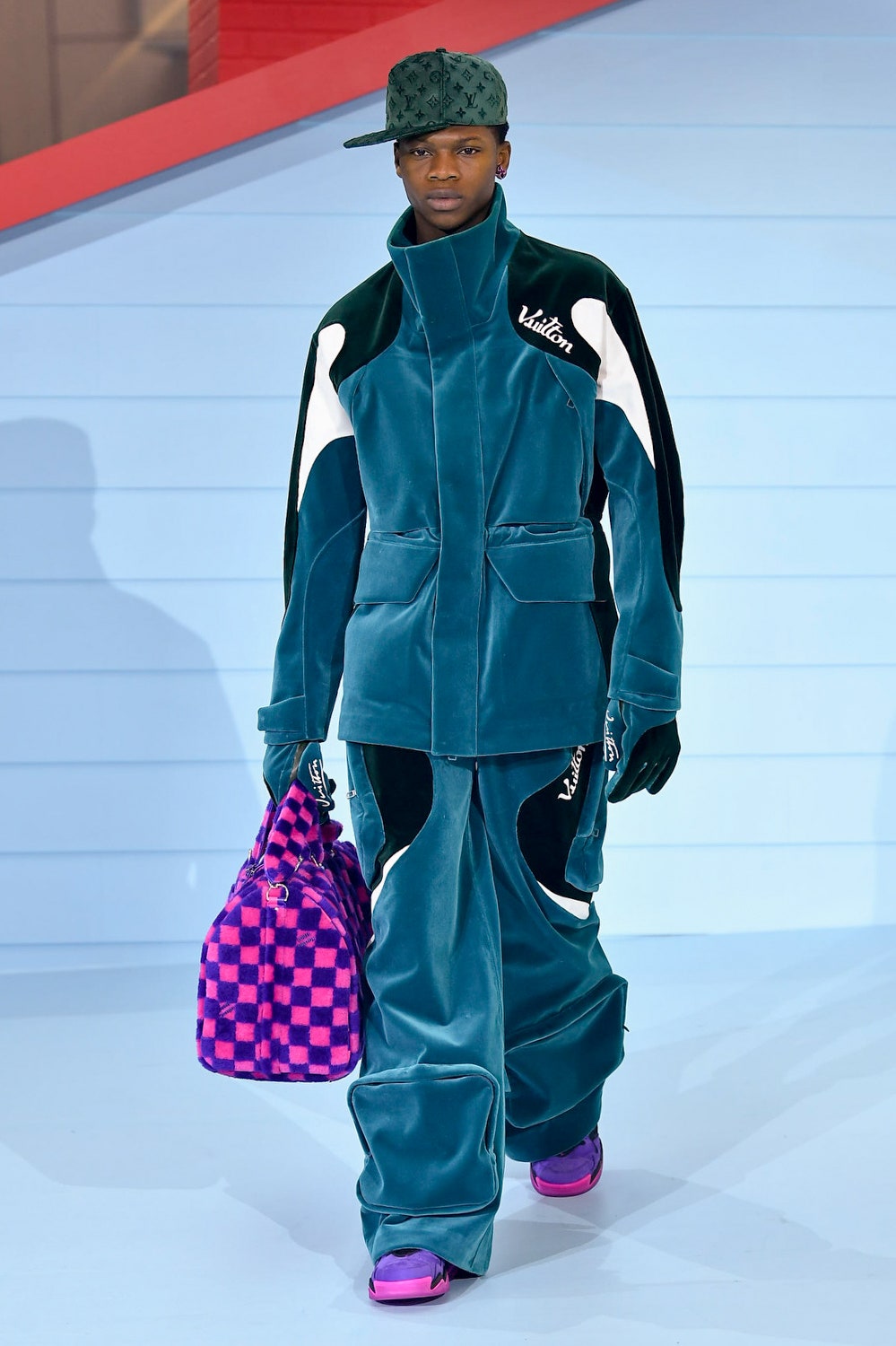 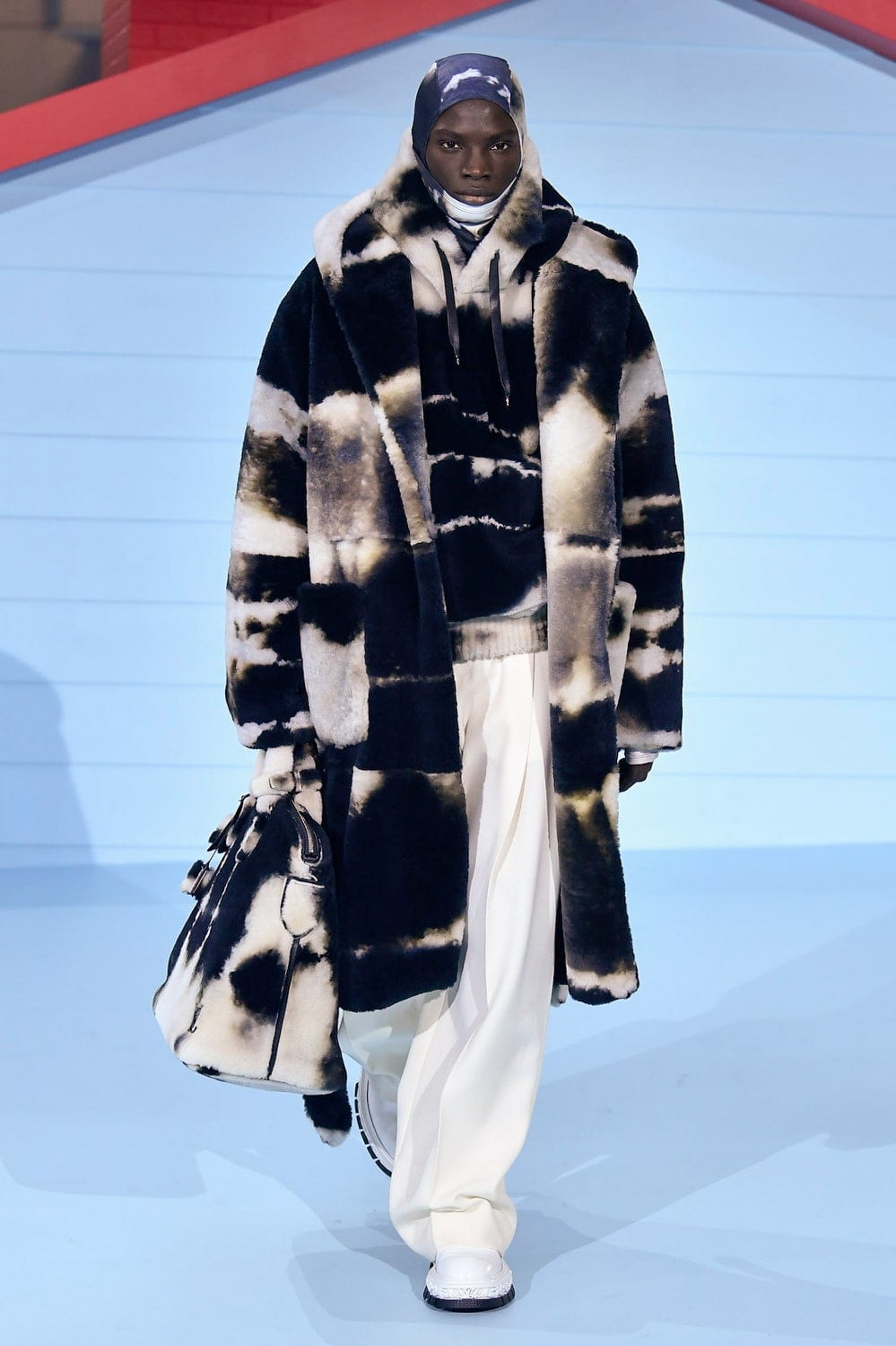