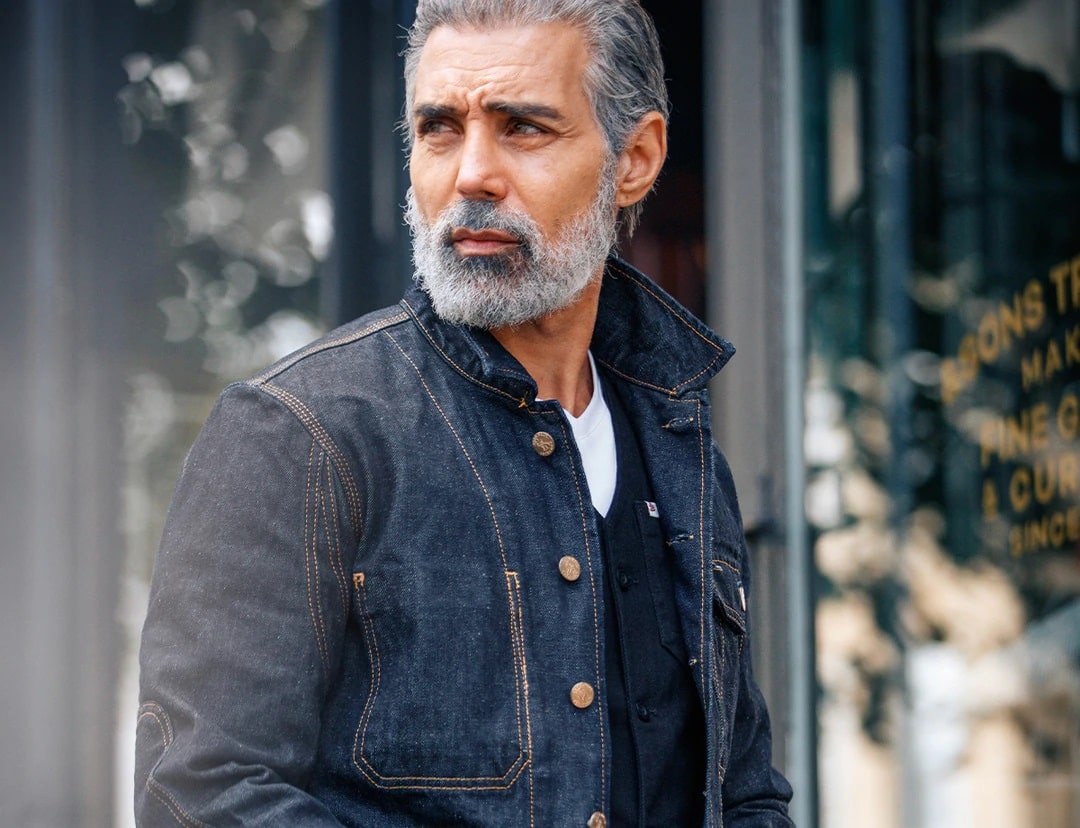 Jeans for the office? Why not? We’re far past the suits-only rules that framed most 20th century workplaces. Yet, you can’t just show up in any pair. Casual Friday rules that brought on polos and khakis starting in the 1990s might have prioritised comfort – but they’ve also woven a sometimes-conflicting web of confusion. Rules vary by industry and workplace, and while you can look at your co-workers, it’s far better to be confident and secure than a few steps behind. Why is denim so contentious when it comes to workplace dress codes? Its roots are the cause. Denim – thicker than what it is today – started as a workwear material. Although canvas-based alternatives have mostly replaced it – excluding work-to-casual jeans from Dickies, Carhartt, and other brands – that context continues to follow denim around, painting it with a broad casual brush. How we style it – with a nod to 1950s’ slowly deconstructing dress codes – also doesn’t help. Say jeans, think T-shirt, and mentally you’re at home or partaking in some kind of leisure activity.

Following the evolution of men’s style, the rise of tech startups – which gave way to global conglomerates and, at least in terms of US law, borderline monopolies that strangle competition – further shook up how we dress and perceive jeans. With suiting in the twilight, a new wardrobe emerged – the hoodie or sweatshirt and denim combo, often dubbed the “tech bro look” pioneered by Mark Zuckerberg and his ilk. Since then, a trickle-down effect occurred – one also in line with the deconstruction of 9-to-5 hours that gave way to always-on work culture. By 2019, even the stiff finance world of Goldman Sachs gave in to smart-casual and denim in the workplace. Still, it’s possible to go wrong as the boundaries between work and home and casual and professional blur. If you’ve held off on wearing jeans to work, understand the smart-casual rules for denim: 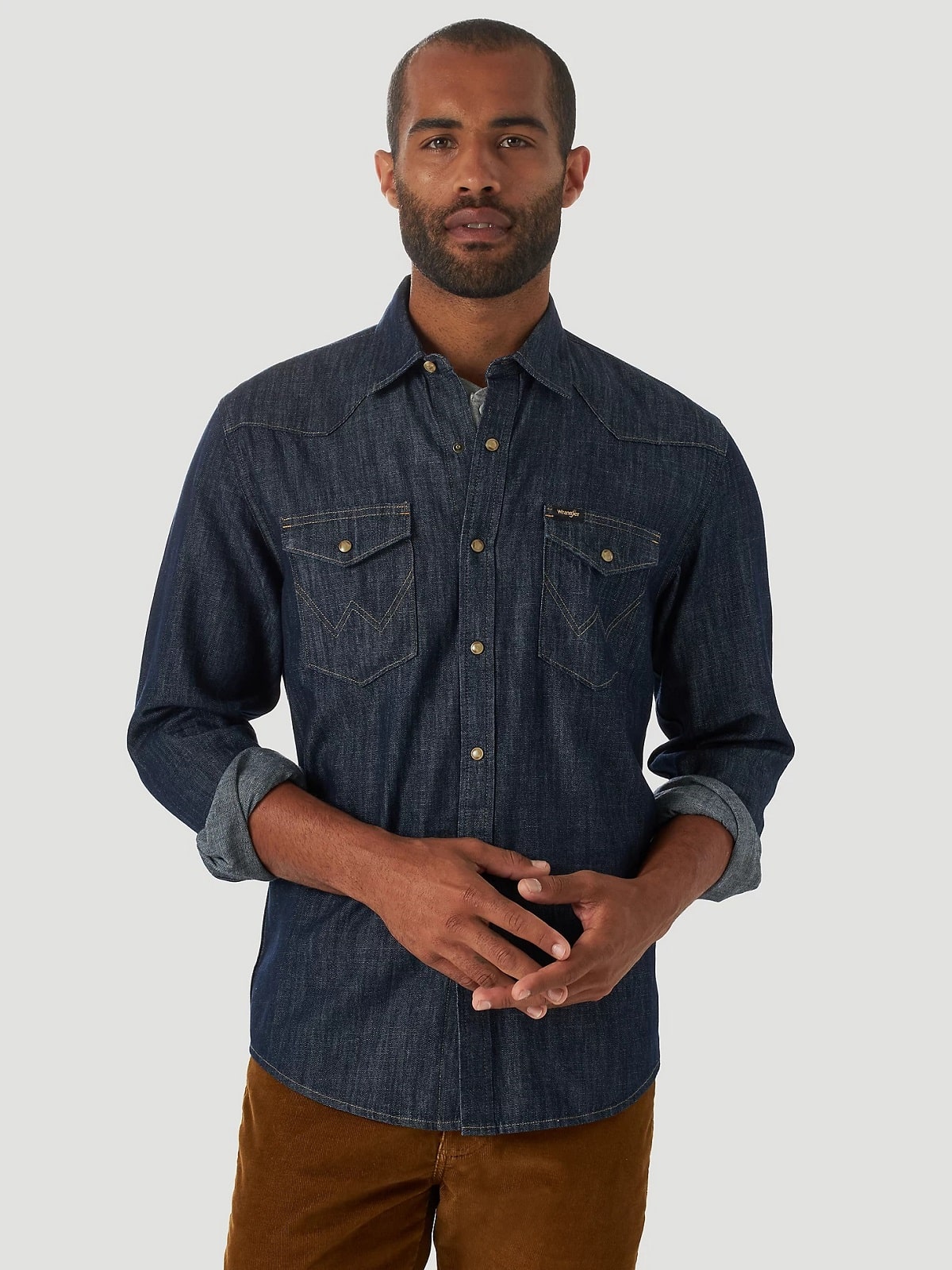 The right pair makes an acceptable, if not crisper, substitute for your chinos and khakis. At the same time, denim shouldn’t be obvious in a “Look what rules I’m flaunting”-kind of attitude. Rather, strive for subtlety, no matter how adventurous your company proclaims to be. In thinking about jeans:

- When in doubt, go dark: By this, we mean solid indigo dyed, like raw Japanese denim or even classic Levi’s, or opt for black jeans. This foundation means steering away from mid-washes and bleached denim – both give off 1990s vibes and a tinge of retro-dad character – and avoiding any distressing.

- But don’t discount light shades: We don’t mean bleached or stonewashed denim, however. Come summer, white jeans – or even a subtle blue, green, or brick shade – in a solid tone fits the warmer weather.

- Aim for regular or traditional: You see how brands label their denim. Skinny, ultra-skinny, and wider cuts all read as youthful and, hence, come off as too casual. Rather, look for a slim, regular, or traditional cut with a tapered to linear appearance that isn’t too baggy or spacious. Just as with your chinos, make sure your jeans don’t bunch around the ankles. Consider rolling up the cuffs if you notice this effect.

- Avoid embellishments: You see how far denim can veer from its roots. Style wise, experimentation isn’t always a bad thing, but in environments prioritising professionalisation – even if that’s a casual, understated version – patches, rips, splatter paint, and embroidery go far beyond these loosened boundaries. Instead, keep stitching neutral, with low to no contrasts, and avoid having visible logos, as this, too, can appear flashy.

- Balance out your denim: Smart-casual dressing becomes a balancing act between more traditional yet oftentimes less-structured business pieces – think blazers and button-downs or polos – and casual ones, like denim, dress sneakers, and fleece. Consider these parts in relation to each other. In the present time, a blazer paired with a less-formal button-front and jeans has turned into the quintessential smart-casual ensemble, and you can’t go wrong here. Err toward caution with fleece and hoodies – a poor fit can look too casual – and while T-shirts have made roads in workplace dress codes, they’re better paired with chinos and a blazer over denim.

- Go tonal: Older workplace dressing advice emphasised neutrals and eschewed most prints except for pinstripes and smaller checks. These standards have since evolved but haven’t done a 180. When wearing denim, avoid contrasts, and instead, strive for tonal dressing with other neutral hues – think green, brown, black, grey, and other blue shades.

- Think about fabric: Whether with a suit or denim, quality materials become a distinguishing factor. Stretch denim has potential to look cheap: Along with avoiding skin-tight fits, any fabric with puckering or visible elastic threads is best reserved for the weekend. Instead, look for fully cotton, raw, or selvedge denim, which starts out stiffer but holds its appearance for longer. 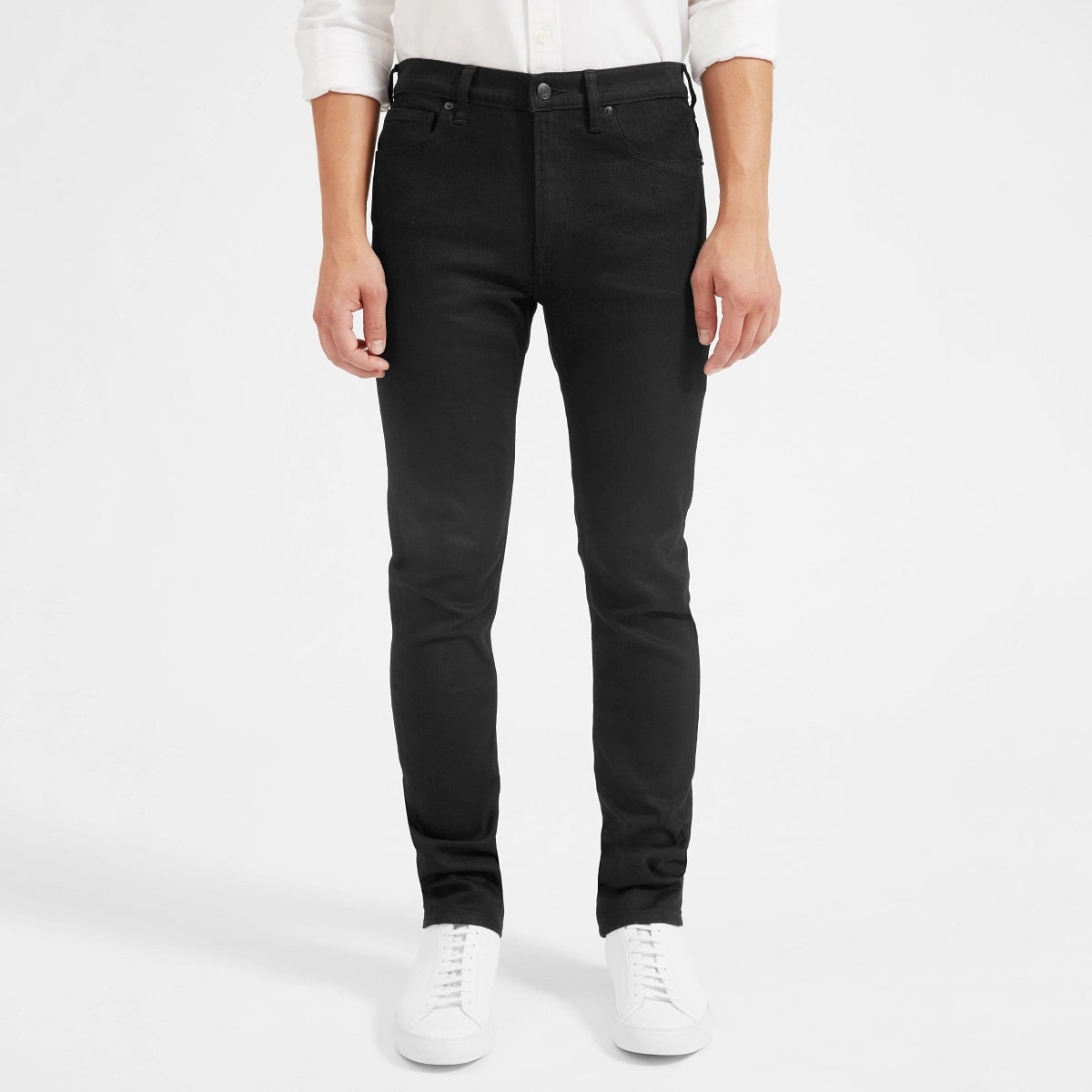 Think Beyond to Shirting

Already hinted at, denim in the smart-casual spectrum doesn’t begin and end with jeans. Additionally, denim turns into an alternative shirting material that shakes up the predictable button-down. However, denim jackets – trucker or blazer style – come off too casual or, worse, appear reminiscent of Justin Timberlake’s infamous Canadian tuxedo at the 2001 American Music Awards. So, similar to jeans, here’s how you can dabble with denim shirting while staying within smart-casual rules:

- Keep it classic: Solid, medium-wash blue takes the middle road. Avoid anything with an obvious treatment – acid and stonewashed denim come to mind – and any embellishments, whether from paint, patches, or embroidery.

- Dress for the season: Lighten up for summertime with breathable chambray, and by winter, transition to a heavier, more substantial denim.

- Pay attention to fit: Also head straight for the middle here: Not too loose as to envelope your body shape, but avoid something form fitting. Instead, aim for something defined and linear yet still somewhat easygoing. 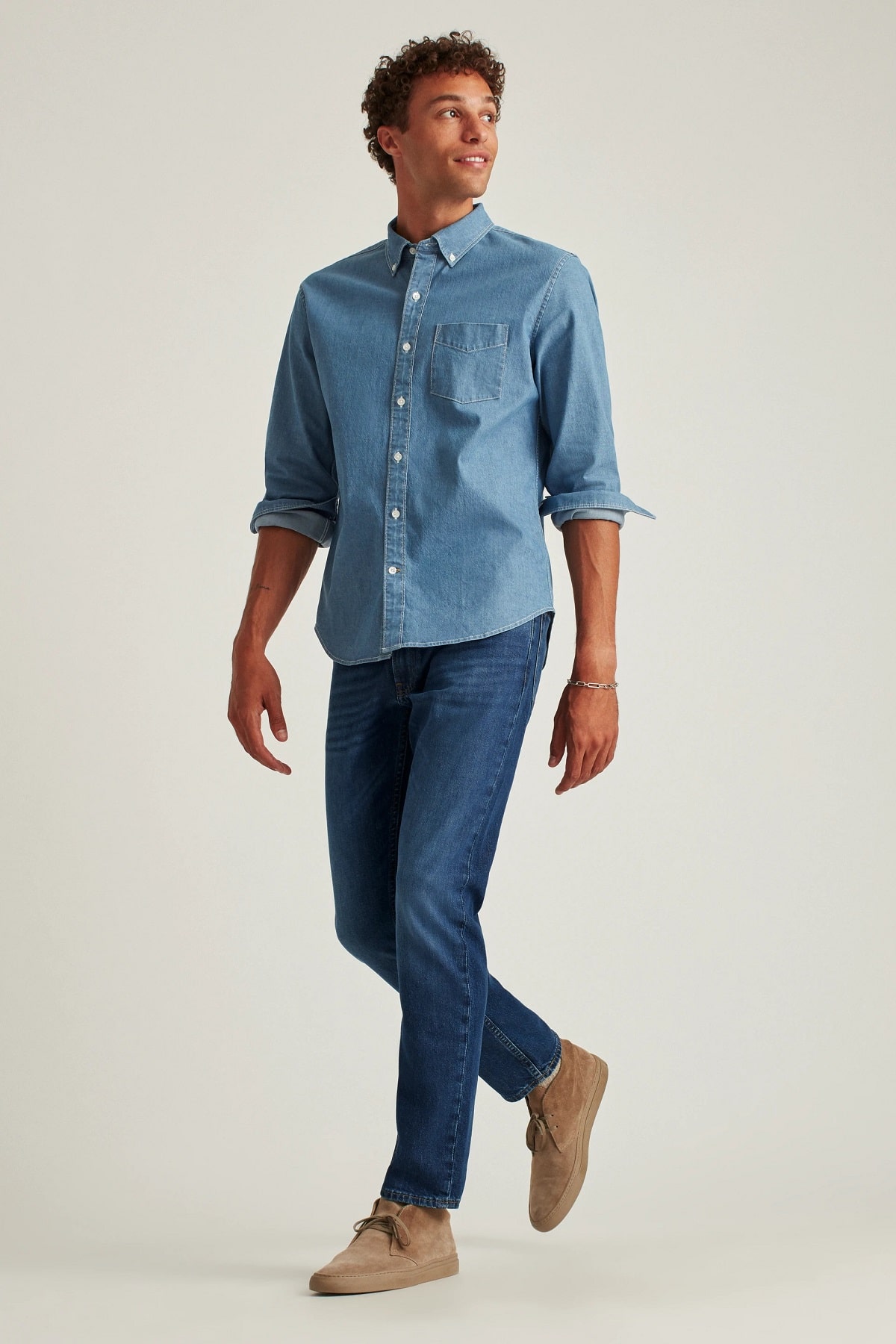