BREAKING OUT OF THE MOLD AND FINDING A MORE YOUTHFUL PASSAGE 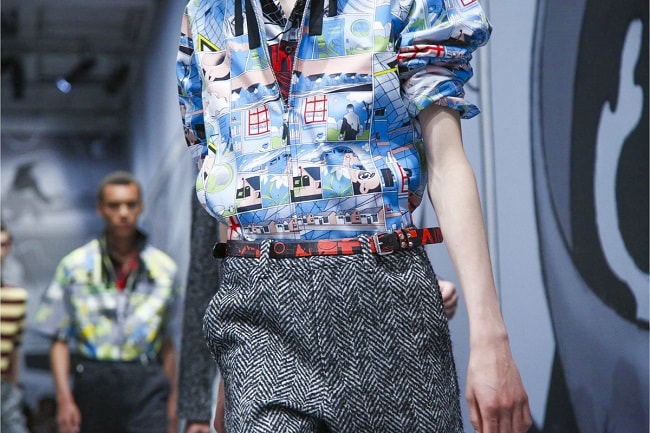 Often thought of as the middle, somewhat-forgettable sibling between London and Paris and a more conservative occasion than New York, Milan Men's Fashion Week did an about-face this time around, breaking out of the mold to put more effort into its menswear lineup. And, what could’ve been a transitional few days ended up finding a more youthful passage.

Although some consider this strategy direct pandering to Millennials, especially with singer Shawn Mendes modeling for Emporio Armani and showing off their smartwatch, its overarching concept reflects the streetwear-infused styles infiltrating menswear over the past few seasons: Workwear pieces, sportswear silhouettes, bolder patterns, and a glut of returning ‘90s trends. Yet, out of everything unveiled from June 17th through June 20th, the following stand out: 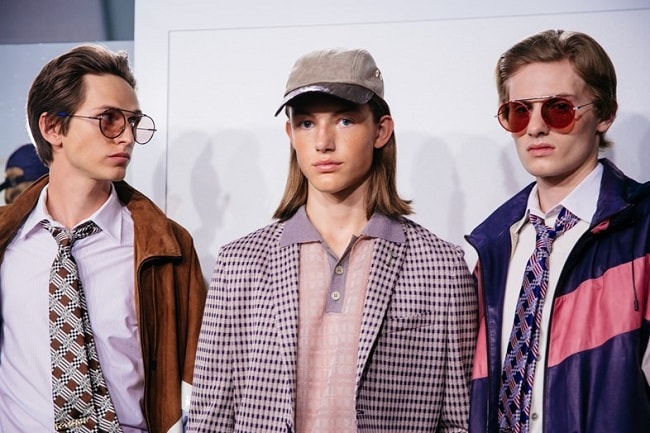 At one point, Bermuda shorts – slimmer cut and falling above the knee – seemed like a novelty. Yet, based upon designers’ Spring/Summer 2018 presentations, higher heights now push that limit. Prada, for instance, departed from its pop art imagery to add a both a shorter length and higher waist to loose, lightweight materials. But, while many might find Prada’s oeuvre reminiscent of 80s basketball shorts, the Salvatore Ferragamo presentation tried out something similar from another perspective – Mediterranean coastal style. The combination, here in solid shades and striped prints, sits lower and falls wider and reflects Guillaume Meilland’s attention to texture. 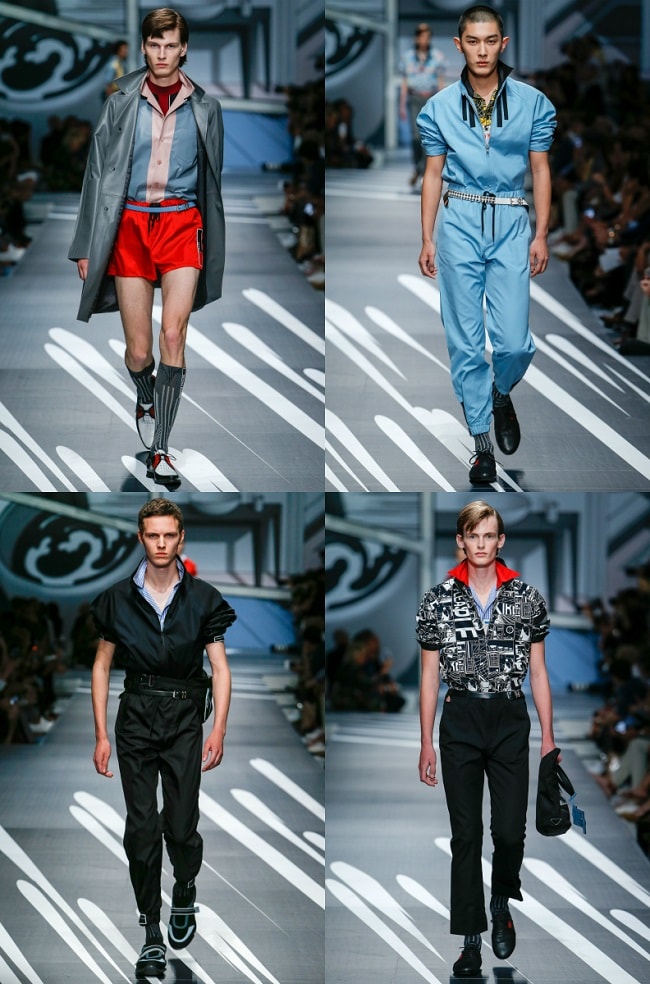 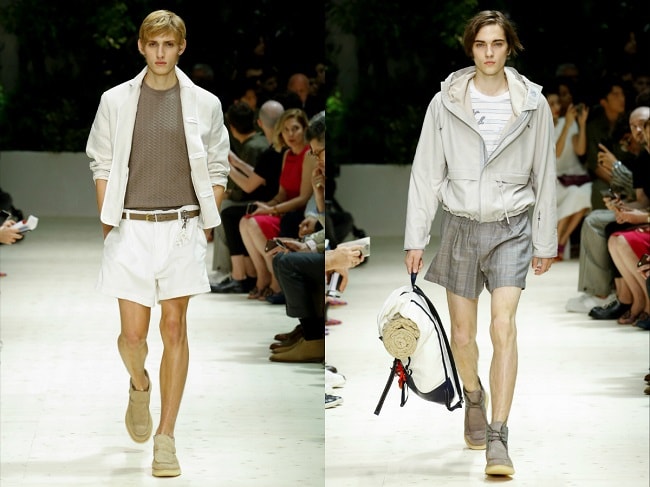 Whatever you want to call them – RompHims, coveralls, one-pieces, or just jumpsuits – this garment transcends aesthetics and trends. Offering a literal interpretation, Prada borrowed heavily from workwear – think of a classic Carhartt or Dickies coverall – and spliced it with an 80s preppy-esque popped collar. Yet, not every iteration ended up being as on the nose. Instead, collections created a one-piece illusion and simultaneously upgraded the monochrome ensemble. Malibu 1992, as another example, paired a solid-colour, oversized suit jacket with matching ripped jeans for a thrift store-find, grunge-referencing ensemble. More refined, Ralph Lauren Purple Label kept the shade constant through a solid-colour, unstructured suit and button-down pairing. 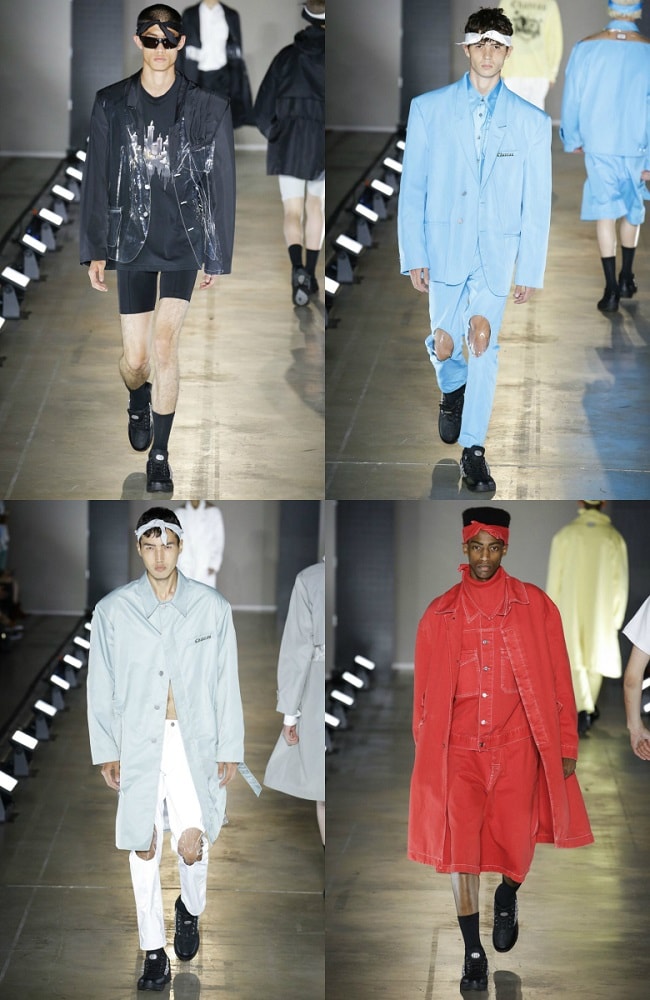 Remember power clashing, the supposedly ostentatious trend from 2013 that involved pairing two prints together and finding common ground between them? Milan’s menswear collections raise this a few points with pattern clashing – essentially the same thing without power clashing’s tepid and tame cohesiveness. What’s different this time around? For starters, designers steer away from power clashing’s commandments – smaller prints and similar shades, particularly – and intentionally go for as many contrasts as they can. Marni’s and Missoni’s SS18 presentations give you an introduction with multi-stripe combinations and by playing checks off stripes or florals. Fendi, along these lines, picked a preppy foundation and seemed to select up to three patterns at random: Plaid, checks, and colour-blocking for one, and a neat print alongside houndstooth for another. Yet, other designers posed the question, “Why stick with the familiar, when you can invent your own pattern?” Prada, Versace, and Dolce & Gabbana ventured on this path in three different directions. Prada paired its comic book and pop art styles with thin, two-tone stripes. Versace, reviving its 90s pieces, went for a collage effect, adding its Baroque prints, Greek border, and two-tone geometric patterns to a single garment. Dolce & Gabbana went with an everything-but-the-kitchen-sink concept: Pieces pulled from its loud Italian kitsch imagery, added animal prints, incorporated florals and colour-blocking, referenced souvenir jackets’ East Asian symbolism, and gambled with playing card-shaped placement patterns. It’s a large amount to take in and, at times, seems intentionally chaotic. 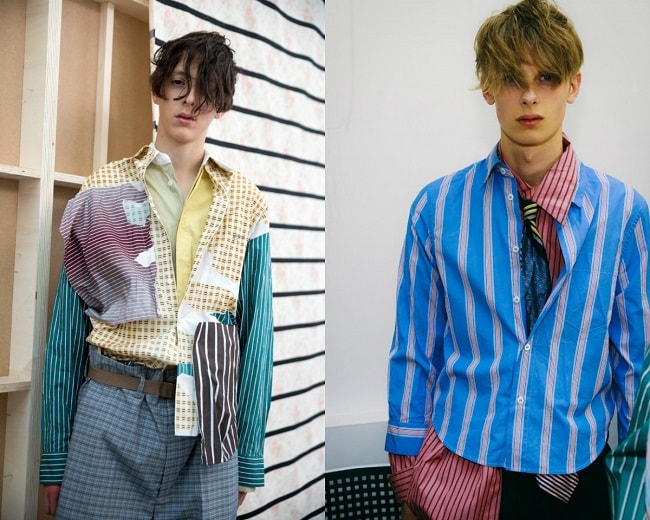 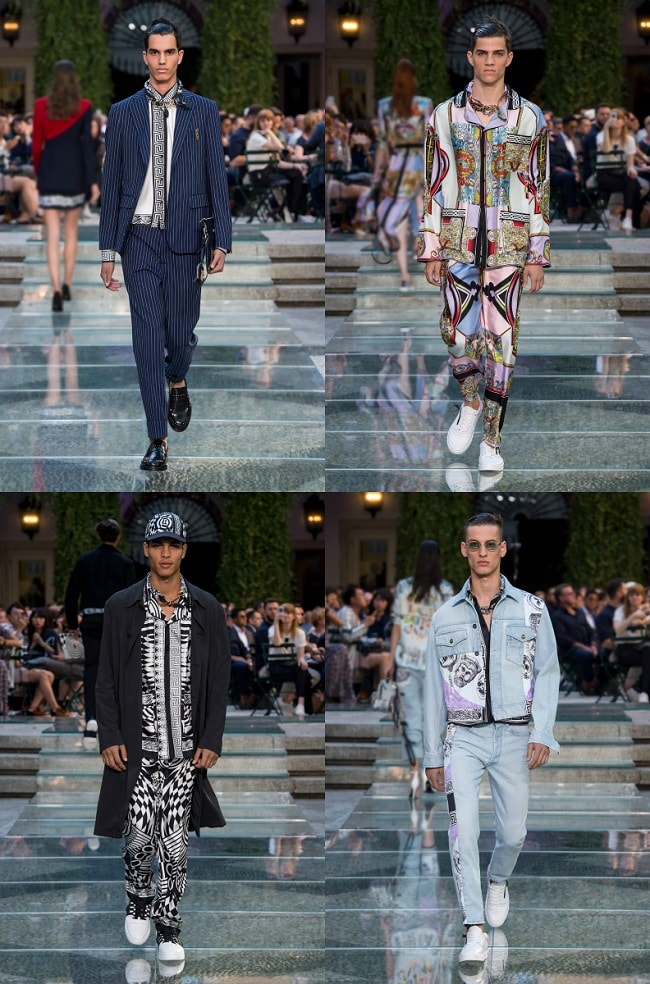 Designers continue to harp on and find fluidity between this decade’s trends, almost forcing unification between styles and streetwear movements that seemed fragmented the first time around. At a literal level, Donatella Versace essentially did a greatest hits collection in honour of the 20th anniversary of her brother’s death. In addition to the revived prints mentioned above, Versace’s SS18 concept grabs from pieces few would’ve worn together at the 20th century’s end: Pinstripes, alluding perhaps to the period’s oversized and boxy business suits, cargo pants as a nod to youth culture, unironic logo tees, and draped silhouettes reminiscent of sportswear. Diesel Black Gold, using the period’s music and subcultures as a starting point, took a page from this season’s rave-influenced collections, combining layered and oversized sportswear silhouettes with elements of grunge – particularly long leather jackets, flannel checks, and thrift store-discovery pastiche. In this direction, Malibu 1992, the debut of Korean designer Munsoo Kwon, opted for similar pieces seen through a boyish lens. While its theme, YOLO, is decidedly 21st century, Malibu 1992 drags out the concept of oversized sportswear while incorporating shell suits, European styling, and military influences. The overall aesthetic goes for baggy sweaters falling off the shoulder, shapeless pants bunching up around the ankles, and monochrome ensembles enveloping the frame, as if the wearer is, in fact, trying on the clothes of an older, more mature sibling. 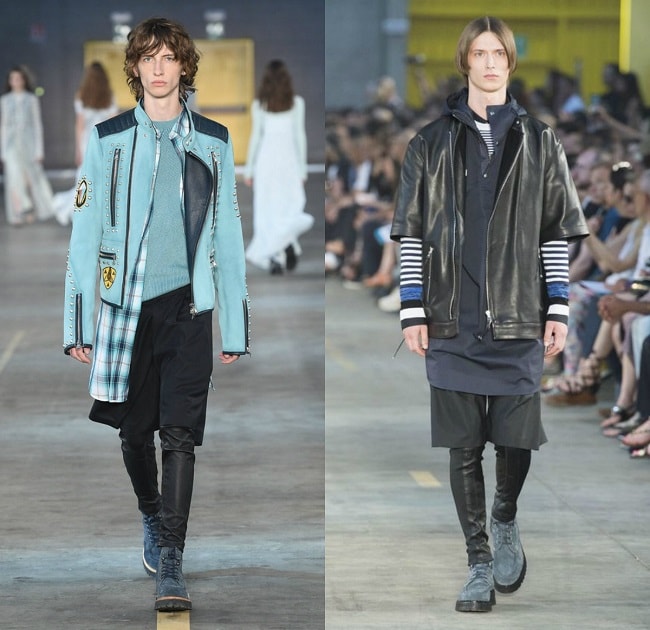