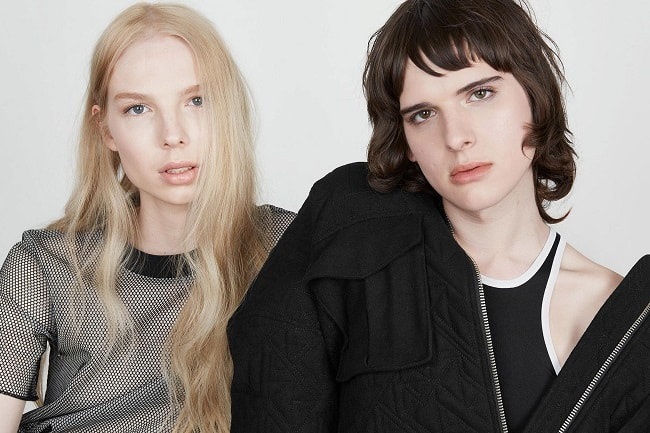 As cloyingly alliterative as it sounds, it’s less unique to be unisex these days. With J.W. Anderson building a fashion-forward androgynous aesthetic and brands like H&M unveiling collections designed for wear by both sexes, the notion that guys can reach for the same pieces that girls do – and not get shunned for it – seems less like a pipe dream. Even just a decade ago, what constituted unisex fashion couldn’t be described as runway worthy – mostly shapeless, streetwear-influenced pieces that obscured the torso with a bulky, unstructured cut. Neutral colours added to the unexceptionally “blah” factor. In response, “unisex” collections still bring up such middle-of-the-road associations.

The tides are turning – or, more specifically, top-label designers are directing them. Gucci, Burberry, and Tom Ford now present men’s and women’s fashion together – sometimes, with minimal variation between collections – and even events like the recent Shanghai Fashion Week highlight those like Damir Doma, who’s since smudged the line between. 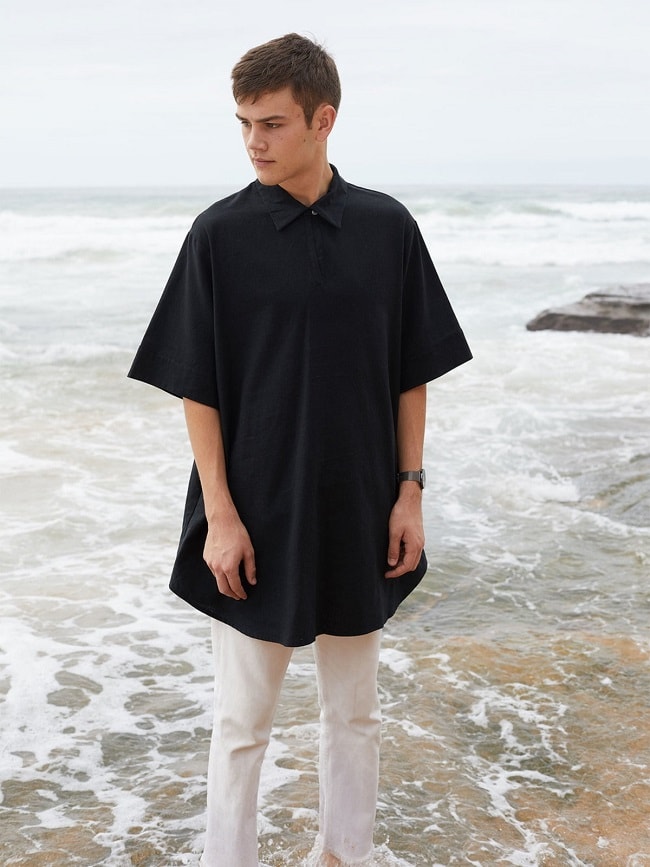 On top of this, fast-fashion retailers have noticed the growing demand for more stylish unisex offerings. H&M’s Denim United collection, a 19-piece line marketed toward all gender identities, literally fused masculine and feminine elements together, all while making it all out of organic and recycled cotton. More recently, ASOS collaborated with GLAAD to create a message-driven, gender-neutral line. Its eight, streetwear-influenced pieces, all in black and white, get this across with the word “unity” and the ampersand symbol. In stores, too, breaking down boundaries is being taken literally. Selfridges, for instance, started its agender effort in 2015, creating a more neutral setting for blending women’s and men’s collections. The change came after those running the UK department store chain noticed men shopping for themselves in the women’s section and vice versa. However, when it comes to actual unisex fashion – and not just an androgynously styled line with distinct men’s and women’s collections – which brands break from the mould? 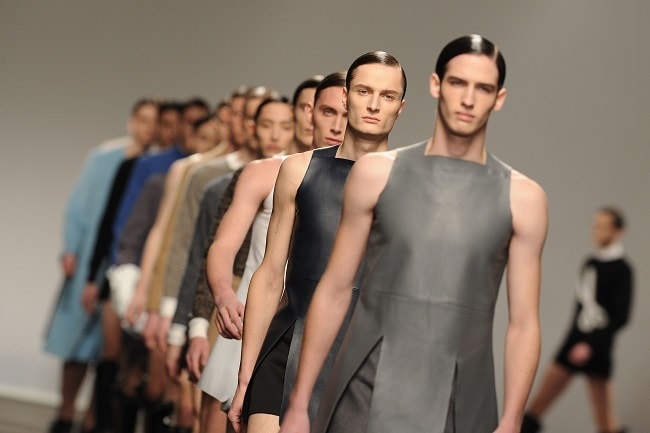 Being raised as a boy during China’s one-child policy years partially influenced Danxia Lu’s approach to fashion. Yet, almost as the counterpart to this, her feminist outlook actually propelled her to study fashion at CSM, according to an interview in Dazed magazine, seeing it as more of a pathway toward empowerment. Between these two, a truly on-trend unisex collection emerged. As SS17 experimented with ruffles, satin half-robe silhouettes, and tube-top cuts for men, AW17 understands both the need for structure and something fashionable. The latter results in an amalgamation of camp collar shirts, bell sleeves, boxy, wider cuts, trench coats, and angular skirts extending at least mid-thigh, with the occasional pop of mustard amid a mix of navy and grey. 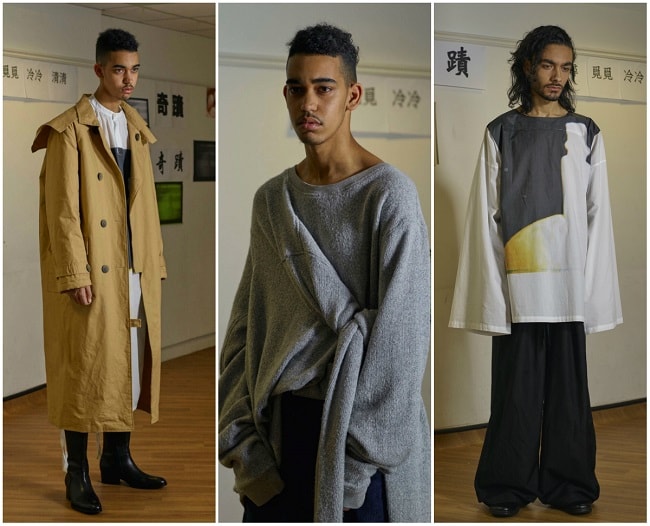 While Fabio Costa, of Protect Runway’s season 10, separates his NotEqual brand into differently named collections, none are specifically geared toward men or women. Rather, the Brazilian-born designer looks at various androgynous, intentionally genderless forms to push against traditional tailoring yet understands that clothing’s primary purpose is still to be worn. As a result, collections since its 2012 debut dabble with wrap skirts, dresses, and dress-like shirts with longer hemlines, with many featuring wide, voluminous silhouettes and the occasional dash of pink. And, breaking away from the seemingly monotonous unisex mould, NotEqual further seems to redefine layering, in that cropped, structured and longer flowing cuts can all effortlessly coexist within the same outfit. 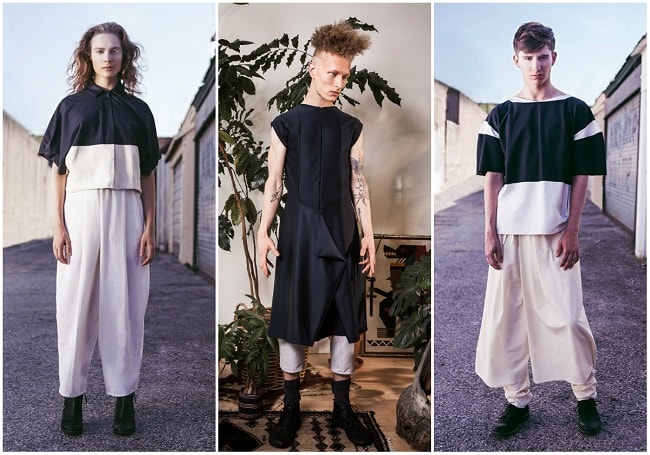 Not designing for one particular gender isn’t an excuse to avoid definition. Rad Hourani, in creating his eponymous gender-neutral collection, realises this factor and, through a navy, black, white and tan colour scheme, unveils various sleek, structured silhouettes that, while not specific to either sex, seem to work as basics for practically everyone. Architectural inspiration and avoiding conformity materialise in a truly neutral brand – one that, based on interviews, avoids the trap of predictable androgyny and offers up styles truly suitable for everyone. And, if you think unisex is something solely faddish, Hourani’s consideration as an advising member of Paris’ Chambre Syndicale de la Haute Couture indicates that this trend could be long standing. 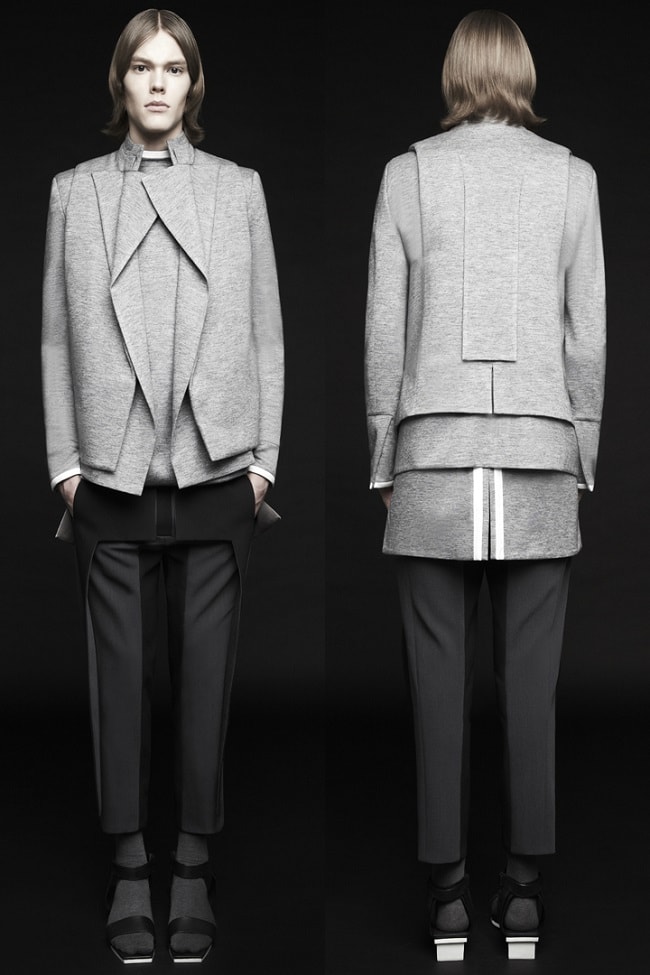 If you took Hood by Air and added a bunch of bright, saturated colours, One DNA would result. Comfort, here, reflects the spacious-is-better mantra of many streetwear brands, but the New York-based label circumvents the standards. Instead, hoodies get paired with tunic tops and long, flowing skirts, often designed in shades rivaling those of a bird of paradise. And, with everything considered a “statement piece,” all genders can find something on-trend from amidst the bold, wider-cut, sportswear-influenced silhouettes. 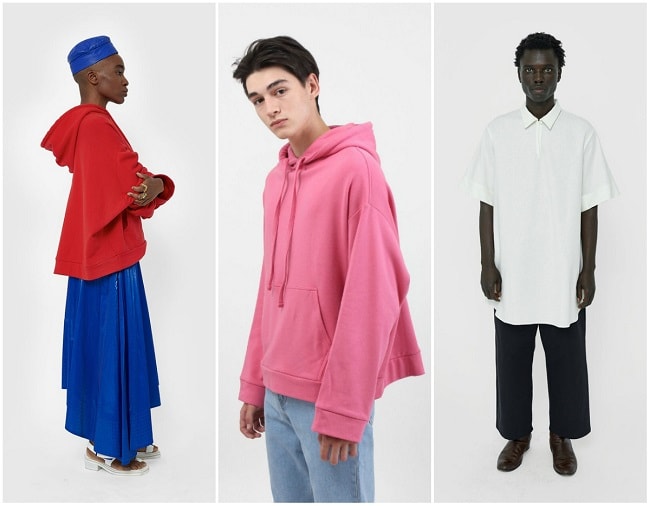 Getting worn by Justin Bieber as he rode a double-humped camel got Double Rainbouu – a brand influenced by surf culture and the classic Hawaiian shirt above all else – noticed. But, this Australian-based company, which frequently designs seemingly sophisticated pieces reminiscent of ‘90s Zubaz trousers and disco shirts, doesn’t entirely create clear his-or-hers garments. Instead, the structured yet flowing silhouettes, ‘70s-esque colourful prints and vintage influence are applied in a similar fashion across shirts and the occasional trousers for both genders. As well, beyond the obvious subculture roots, expanding into gender-neutral knitwear, through a partnership with Woolmark, hints at Double Rainbouu’s adaptability. 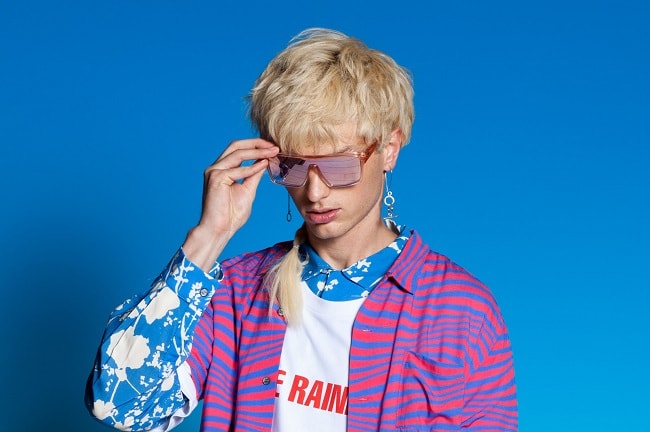 Working with Lady Gaga certainly will shape a career along a distinctive path. That influence, along with designing for Thierry Mugler, appeared to shape Nicola Formichetti’s line NICOPANDA when it debuted in 2015 with what seemed like an S&M meets Hello Kitty concept with a dash of Harajuku style mixed in. On paper, it’s a flashy mix for women wanting something avant-garde, but early presentations indicated Formichetti designed these pieces for both sexes. Its bold introduction has somewhat softened since, giving way to a sportswear-influenced concept more suitable for everyday wear. Yet, no matter which direction NICOPANDA goes, it makes pink ribbons, lace, and tulle – through longer graphic-based shirts that look like dresses and sweatshirts seemingly ripped from a grander gown – a gender-neutral choice. 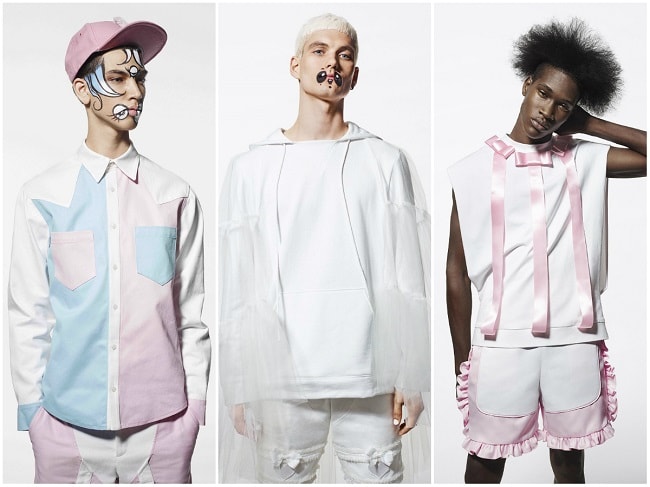