THE BEST KITS AT THE 2018 FIFA WORLD CUP 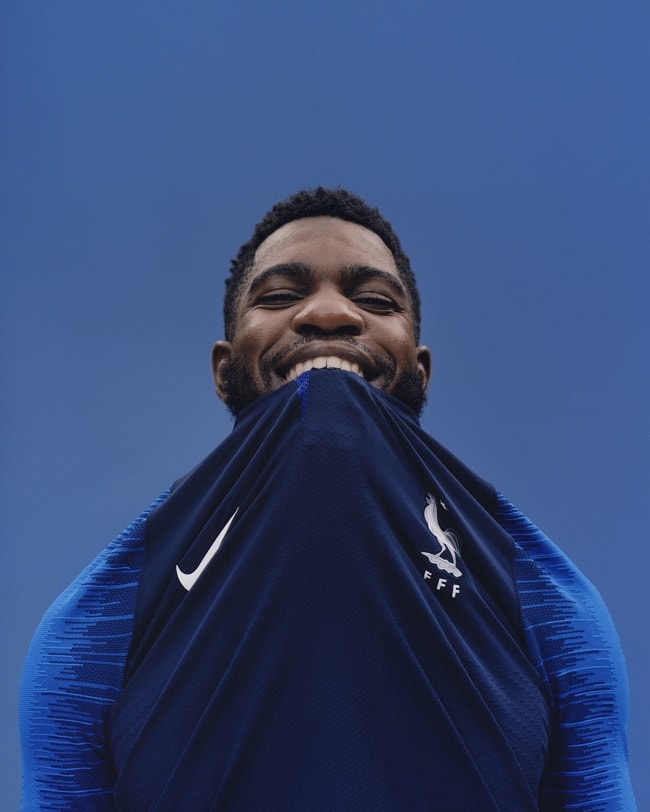 With the 2018 Wold Cup right around the corner, football fans have been spoiled with some of the exceptional kits to ever brace the greatest stage in football. The recent hype surrounding the footballing-fashion world has arguably reached an all-time high with Nigeria’s home and away kits being pre-ordered over 3 million times according to the Nigerian Football federation and the ques spanning around the corner at the Oxford Street Nike store. Let’s see what all the hypes about then:

Arguably the sexiest kit at the World Cup, the France home strip is a thing of beauty. Why change a winning formula with a blue jersey, white shirts and red socks, this young French outfit will be hoping to bring back the glory days of the French national team. Meanwhile, the away kit is a white strip with a subtle graphic print that adds a pop to the outfit. Nike Football apparel senior design director Pete Hoppins explained the inspiration behind the new range. He said: "The way the French express patriotism is through the flag and we wanted to celebrate how the bleu, blanc and rouge brings people together."

Even though they’re unlikely to win it this summer they surely take home the best kit of the tournament before it even kicks off. As soon as Nike released the pictures and concept designs of the home kit there was an immediate buzz. A snazzy zig-zig design, recognising the designs of the 80s and 90s, a theme throughout the kits this year. However, the away kit is a simple, classy, plain green, as if the entire kit budget was spent on the home strip. 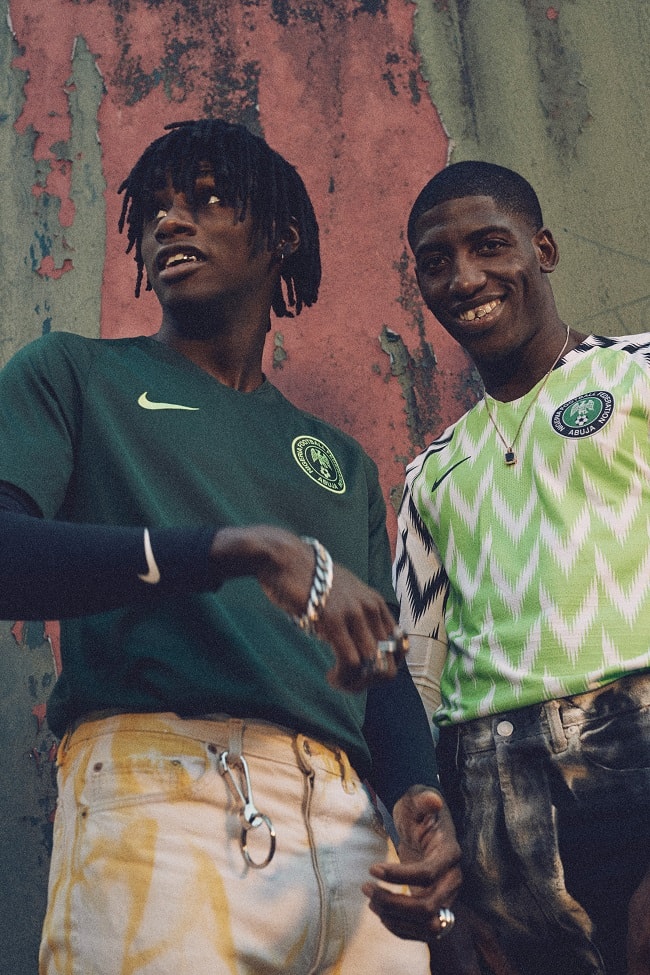 Created by Adidas in a nod to the kit of 1994 at the USA World Cup. The home strip adorns a geometrical pattern down the right-hand side of the strip and looks plain gorgeous. Yet the kit has caused controversy as it sports the colours used by Spanish separatists. Even so, La Roja will be hoping to secure a strong finish after the humiliation last time round at the 2014 Brazil world Cup after the 5-1 thrashing and group stage exit. 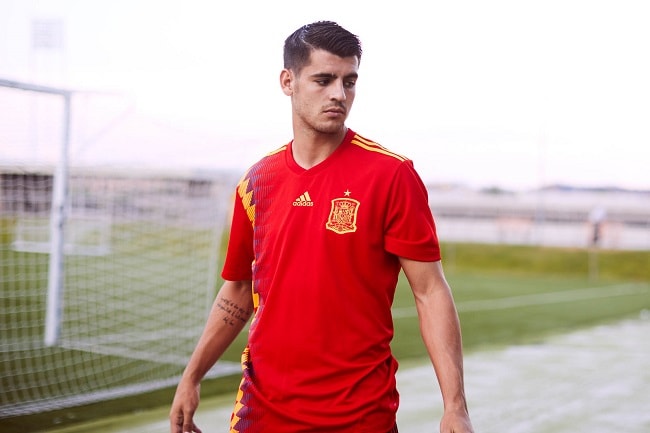 Inspired by Italia 90 the Germany home kit sports the iconic black and white design and looks simply stunning. An instant fan favourite as most German football kits are, this Adidas design is a classic. However, the away kit isn’t too bad either. Adidas states its “a modern interpretation of the famous green 1990 World Cup away jersey worn in the semi-final vs England”. With the Germans looking to defend their World Cup crown, they’re going to be doing it in some style with arguably the best team on paper in the tournament. 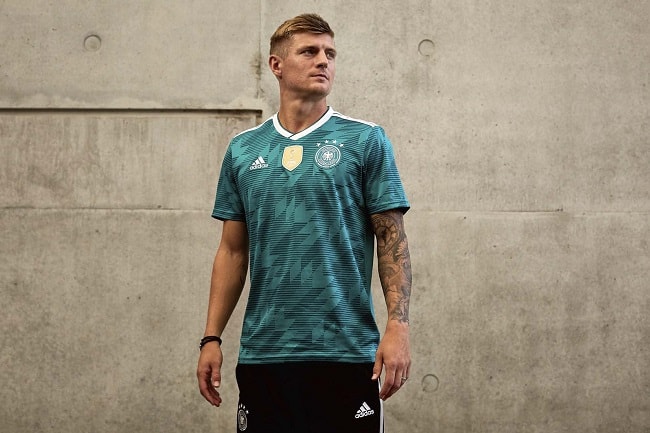 Again, created by Adidas, the traditional yellow red and blue strip is a nod to the kits worn by the South Americans throughout the 80s by the likes of Carlos Valderrama (that dude with the massive blonde afro) and Rene Higuita (that mad goal keeper who scorpion kicked a clearance from his own goal line against England). Meanwhile the Colombia away kit sees a royal blue with pinches of orange and another geometric pattern down the left side. Will this be the year for the underdogs and be James Rodriguez’s claim to one of the all-time greats after a sensational emergence last time round? 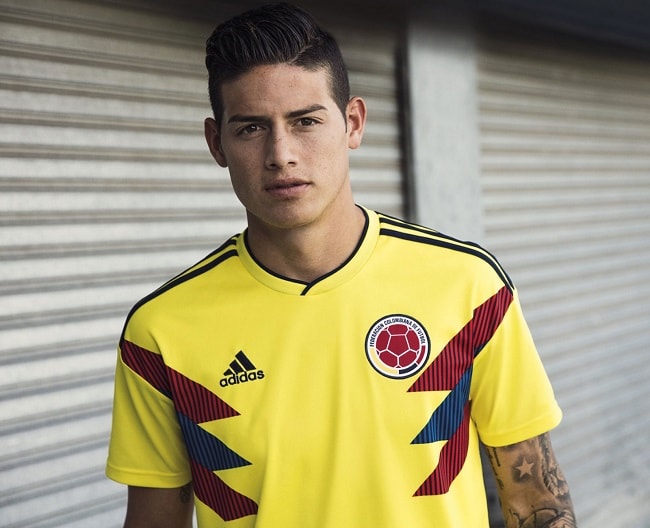 Another bold, red design, inspired by the kit of 1984, the Belgians will be hoping to go far in this tournament and look classy doing it. The strip sees a geometrical pattern across the breast holding the Belgian badge. Furthermore, the away kit isn’t too shabby either, with a bold yellow strip adorning a slight over graphic with black and red stripes along the shoulders, breaking up the kit. With the only squad on paper that could match the Germans will this be the year that some of the best players in the world can gel as a team under Roberto Martinez? 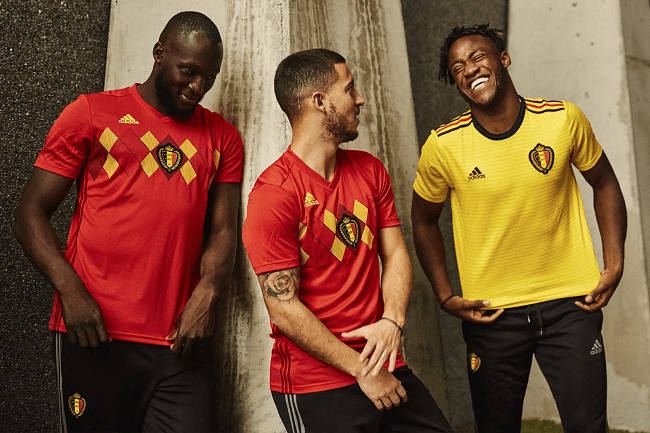 Simple, classic and stylish, no we're not talking about Leo Messi here, were talking about the Argentina home kit of 2018. Inspired again by the past, this kit takes its design from the 1993 Copa America strip, the last major tournament that La Albiceleste won. Vertical Blue and white stripes down the torso with white shorts - a flawless design. The Argentinian away strip sees a black jersey with blue and white trim and funky patterns along the side of the thorax creating a slimming illusion. Will we see the most dangerous front line in football replicate the success of 93 or will he fall short at the final hurdle again? 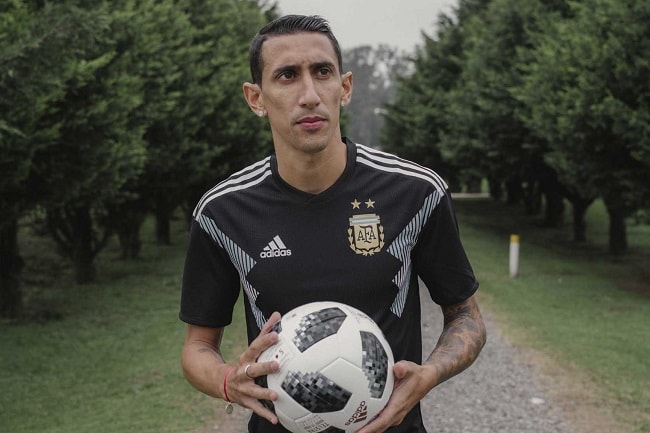 A naughty little number, the retro modern home kit is a lovely dark green with light green and white trim. Adidas haven’t pushed the boat out with this one but they didn’t need to since Mexico have always looked good at any tournament. The real masterpiece is the away strip, a plain white jersey with a horizontal red and green stripe across the lower chest and abdomen, drawing inspiration from the kits of the 50s, with the crest outlined in a red shield shape along with bright red shorts and green socks. The Mexican uniform is a fabulous addition to our screens. 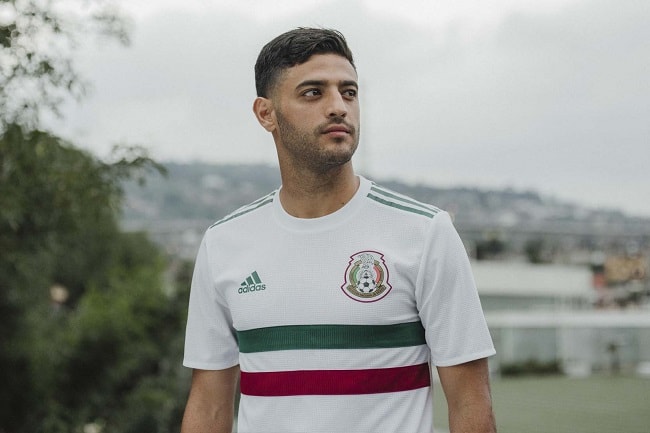 I like the direction Southgate has gone by taking younger players to the World Cup, he needed to go all out and take more youngsters rather than the odd few. The white and blue home strip is basically the same as it has been for the past 15 years and is nothing to be excited about but the away jersey is more exciting. Red all over with white shorts and an understated cross across the front of the torso is just something a little different. 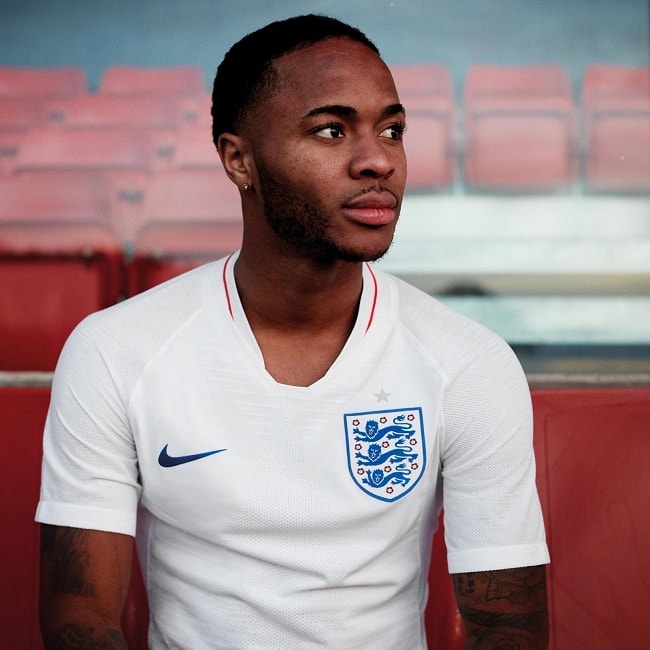 The Seleção needs to make a statement this year after being dismantled in front of their home fans by Germany 4 years ago. The home kit sees the traditional yellow and blue with a discreet zig-zag pattern down the middle of the jersey which has been in use since 1954. Yet the away strip is simple in another blue colour, I think the Nike designers could’ve really pushed the boat out for this vivid country and put real emphasis on Neymar as senior design director Pete Hoppins states “Being Brazilian is about rhythm, a certain type of movement. You see it in the dance, you see it in the art and you certainly see it on the football pitch. Only Brazilians play this way.” 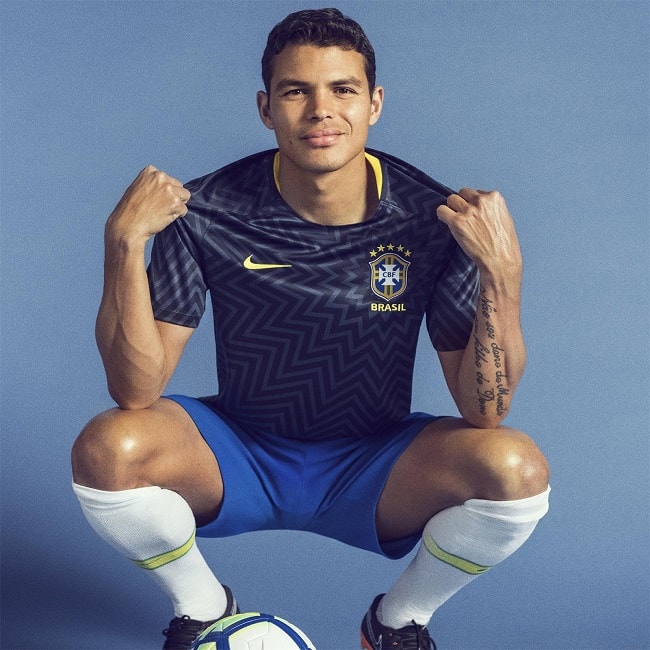