WHY CARTOONS ARE HAVING THEIR MOMENT IN MENSWEAR

WHEN FASHION AND COMMERCIAL ART INTERTWINE 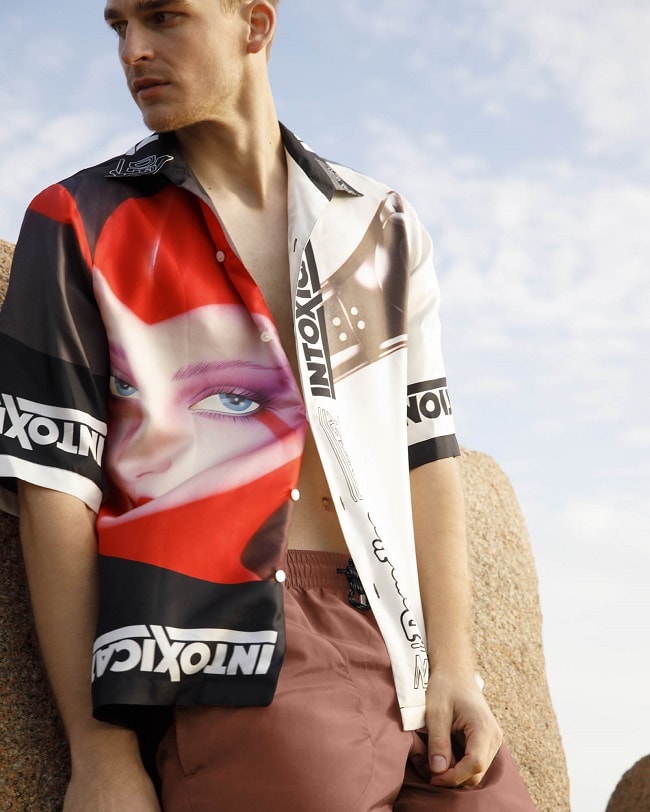 From dabbling with streetwear to dance music influences, menswear has discovered its more playful side. Of course, the trappings of button-downs and suits won’t ever quite disappear, but from the past few rounds of Fashion Weeks, collections reflect an effervescent attitude – ultimately, that fashion for guys can be fun. Case in point, Prada’s Spring/Summer 2018 offering, which spans workwear-hinting jumpsuits to comic book pop art prints, all pulled together with a plethora of pops of colour and pastel shades. Yet, Prada’s simply the apex of a trend that has ebbed and flowed for over a century – the point where fashion and commercial art intertwine, and what results when they do.

It’s said that the first commercial fashion and art collaboration occurred when Salvador Dali placed a large lobster on an Elsa Schiapparelli dinner dress. But, much of what we associate with pop art-based fashion goes back to Andy Warhol, who himself fluidly moved between fashion and art circles. Warhol’s artistic career started with fashion illustrations, and later progressed to his own memorable works of art based on mundane objects – with the best known being that Campbell’s Soup Can painting. Warhol eventually went into the opposite, although a somewhat meta, direction: making paper dresses shaped like the images of his paintings, essentially creating fashion just as disposable as the initial objects featured. Decades later, Versace and Dior borrowed Warhol’s prints for their own creations. However, while Warhol’s the best-known example in modern times, his adaptability and innovation were simply a product of his time. Mid-20th century saw creatives of all types – fashion designers, artists, and musicians – running in the same circles, and those influences rubbed off. Particularly for fashion, bold graphics and colours referenced the era’s pop art style. 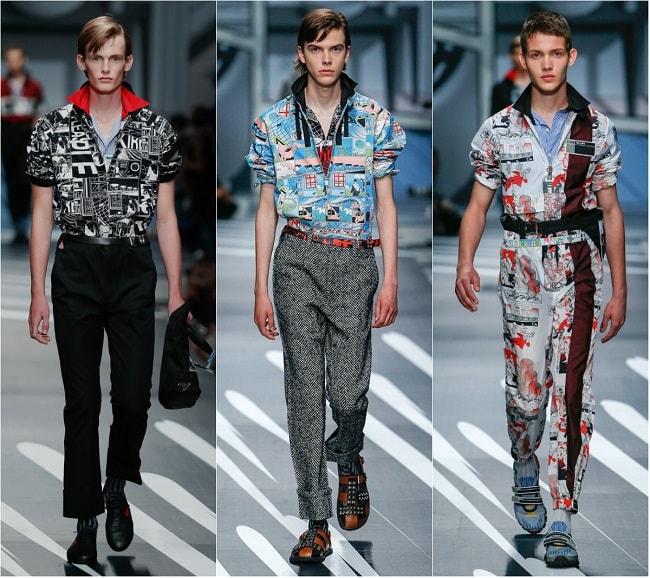 Yet, what qualifies as art and as fashion has since broadened, encompassing cartoons, anime and streetwear – all scoffed at as being 'low brow' even just a few decades ago. However, in these supposedly lower echelons, parody fashion – essentially, taking and reworking recognisable logos to send a message – came from the same place as those mid-century pop-art works. And, in the ‘90s, streetwear brand Hook-Ups began adding anime and manga-style graphics to its pieces geared toward skaters. Artistic appropriation in the traditional sense hasn’t entirely died out, though. In recent years, Jeremy Scott took a Warhol-esque approach at Moschino, designing multiple womenswear pieces on the McDonald’s Golden Arches and Frito-Lay branding. Raf Simons saw a similar outlet through New Order’s Factory Records era album covers, created at the time by graphic designer Peter Saville. Saville’s fairly minimal but distinctive designs, as such, appeared as placement prints on jackets, hoodies, t-shirts and indirectly renewed interest in the Manchester synthpop band’s back catalog. 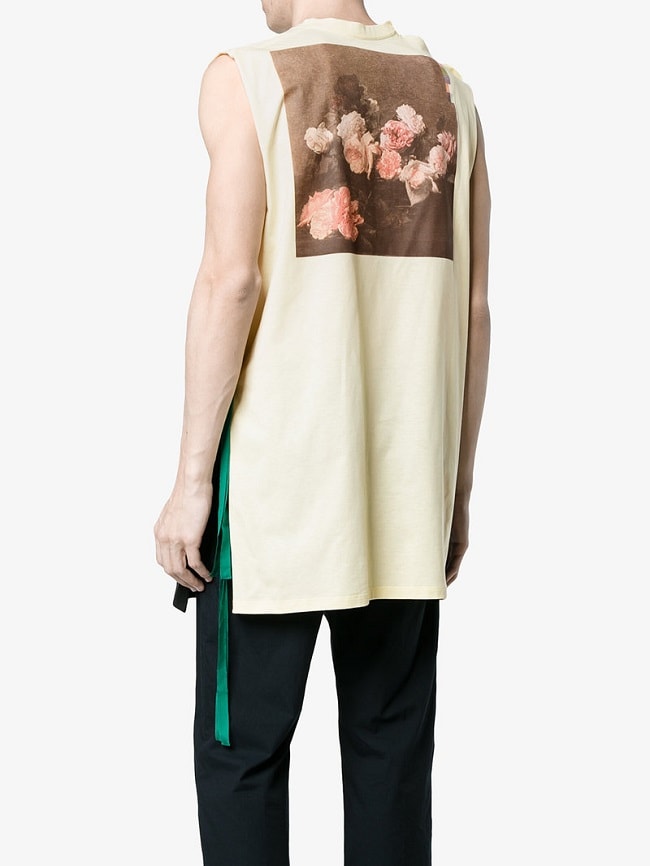 At face value, Prada’s SS18 menswear collection, borrowing its visuals from traditional comic books, represents more than mingling and influence. According to Miuccia Prada in an interview with Vogue, the presentation’s imagery represents virtual reality that’s made up of simple “little fragments of life,” and it creates a dichotomy with the presentation’s more pedestrian silhouettes – for instance, the jumpsuits shaped like coveralls. Ultimately, the pairing adds an element of fantasy and out-worldliness to seemingly ordinary, fairly masculine garments. That type of escapist fantasy takes a more everyday aspirational turn in Thrasher’s capsule collection with Supreme. For Summer 2017, both brands added a Roy Lichtenstein-inspired comic book graphic – in it, a female character wonders, “Oh, God! Why can’t my boyfriend skate?!” – in both printed and patterned forms over hoodies, jackets, and t-shirts. By themselves, none of these pieces would seem terribly exceptional – just your run-of-the-mill skate pieces. But, the added image and wording convey the prowess and skills associated with both brands. 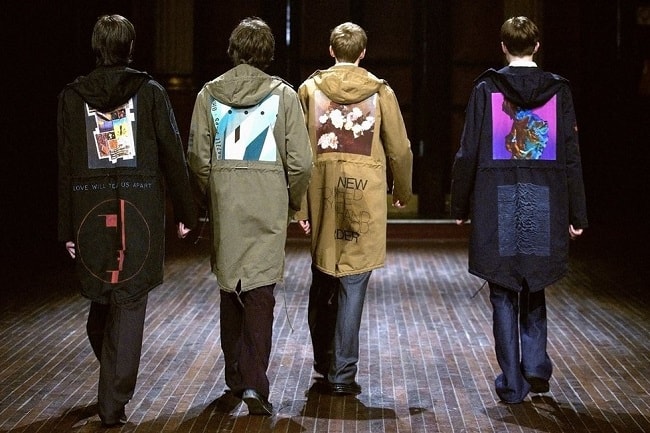 Supreme, of course, is no stranger to collaborations and, last year, dabbled in anime – essentially, the pop art of Millennials and Gen Z. Although one prior collaboration borrowed from erotic anime like La Blue Girl, Supreme x Akira took a more serious and multilayered turn by using the graphics created in the original series by Kastuhiro Otomo. For those unfamiliar, the manga series began in 1982 and concluded in 1990 – a film version came out in 1988 – and centered around the chaos and gun violence following World War III – specifically, an accident that causes a character to receive psychic powers and the destruction that results. The collection goes along the same route we saw from Prada and Thrasher: streetwear and workwear-style staples emphasising Akira’s post-apocalyptic imagery, drug use, and general insanity. The darker symbolism, on the other hand, contrasts with the optimism and whimsy of elevated mundane objects. Rather than make a box of laundry detergent or chips seem fantastical, if not boldly luxurious and a status worthy. Akira’s hopeless, literal end-of-the-world setting and characters cast an ominousness over it all. Ultimately, it’s as if these everyday casual pieces, some inspired by the working man, give everyone else a warning about the future. 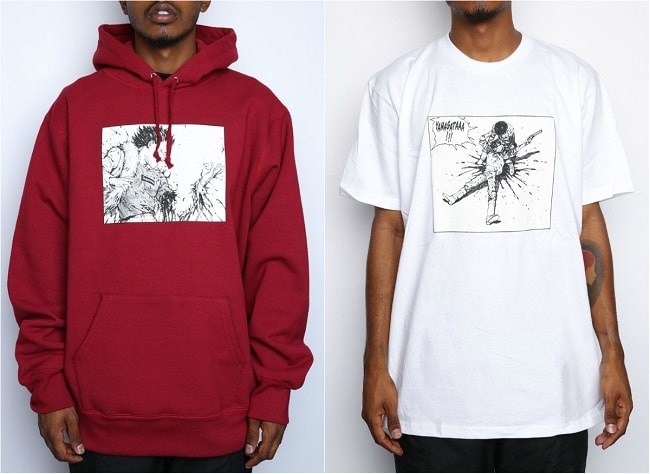 The mid-20th century essentially established the paradigm for all interactions between fashion and pop art. For instance, Prada, prior to its SS18 collection, designed the clothing appearing in Appleseed Ex Machina, a computer-animated film centering around a counter-terrorist operative and her cyborg partner, and dressed the cast of Final Fantasy XIII-2 for a feature in magazine Arena Homme+. However, for many, anime and video games at face value serve as a retreat into the comforts of childhood. For this reason, streetwear brand Triumvir revived the characters of seminal ‘90s arcade game Street Fighter for a series of casual pieces back in 2008. Although arcades are now nearly nonexistent, they remained a staple throughout the ‘80s and ‘90s – and a place where, with just a roll of coins, you could battle it out with Street Fighter, Mortal Kombat, and other games for status and points. Much of that, now, has been relegated to home gaming systems, and while the graphics and experiences are far superior, with those technical advances predictably comes isolation. Saturday morning cartoons, too, faded out along with the arcade experience, although they took about a decade longer to disappear completely. 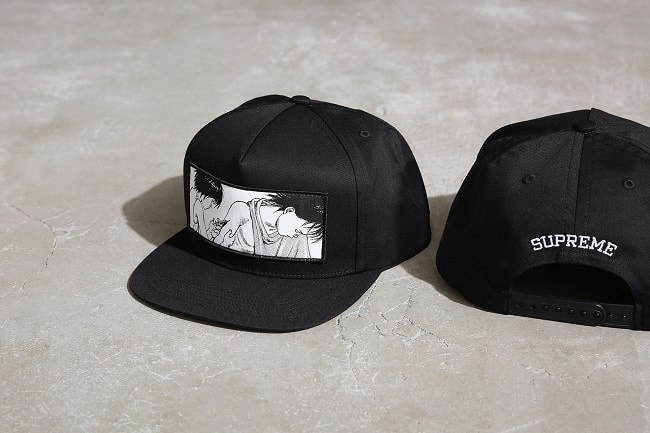 Although shows changed with the years, anime remained a constant through the 2000s, with series like Robotech, Sailor Moon, Dragon Ball Z, and Pokemon getting dubbed and released for American audiences. As streetwear as a whole turns to the ‘90s for anything from its comfort and stability to musical and stylistic innovations, anime appealing to a younger audience has become fair game. In response, Uniqlo put out lines of T-shirts featuring comic book-style graphics from Naruto and Dragon Ball Z as far back as 2010. Graphic design here, though, is key. Emphasising the nostalgia factor, and playing up Dragon Ball Z’s late-‘80s origins, images are styled like black-and-white drawings lifted from a manga. For another perspective, there’s BAPE’s take on Dragon Ball Z. Predictably, BAPE retools the show’s distinctive look around its own brand, resulting in a design that appeals to all the hypebeasts out there and hardcore, memorabilia collecting fans of the cartoon. As an extension of this last point, Billionaire Boys Club takes the same approach, without compromising the original graphics. Here, you’ve got the familiar characters, all initially to celebrate the show’s familiar anniversary, and branding that’s a true fusion.