A FLASHY AND FITTING RANGE INSPIRED BY THE ANIME FILM AKIRA 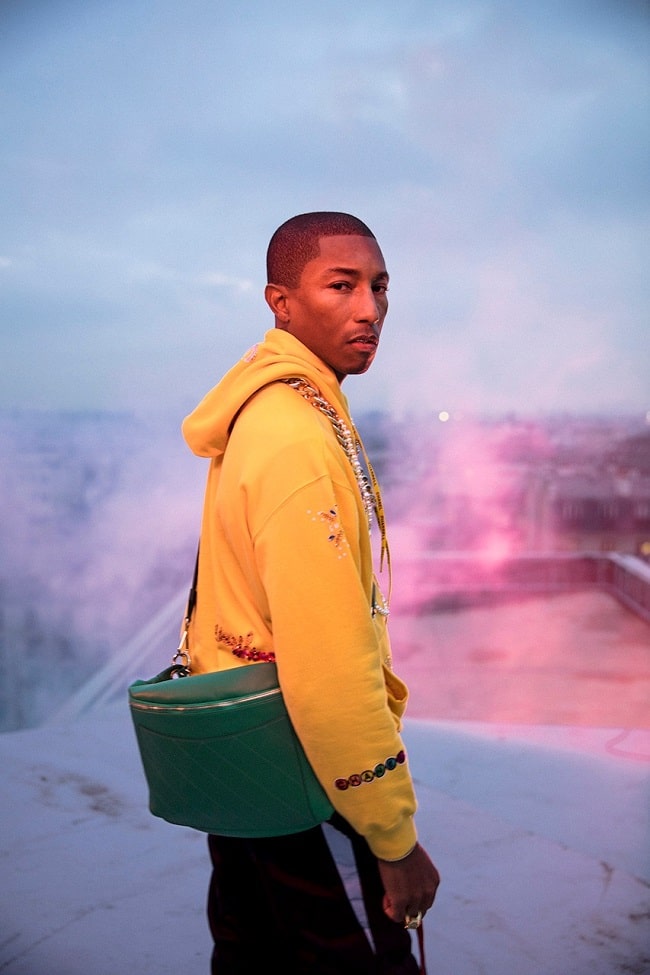 Can a collaboration be teased so early that its full release feels anticlimactic? It’s definitely possible. Limited-edition streetwear collections drop so frequently these days, they’re like EDM hits: All that buildup on social media and through promos just ends in something predictable that, while bought by the most casual hypebeasts, falls far short of being a game-changer.

Pharrell’s latest Chanel collaboration could’ve complacently slunk into this camp. After all, the producer and hip-hop artist stated his intentions all the way back in October 2018 – when a bright yellow hoodie with patchwork and rhinestone details slipped into the brand’s Cruise show in Bangkok. Over the past six months, multiple interviews – including one about working with the late Karl Lagerfeld – plus a lookbook and social media previews kept on pointing to the finished product – basically, the potential collaboration to end all collaborations. 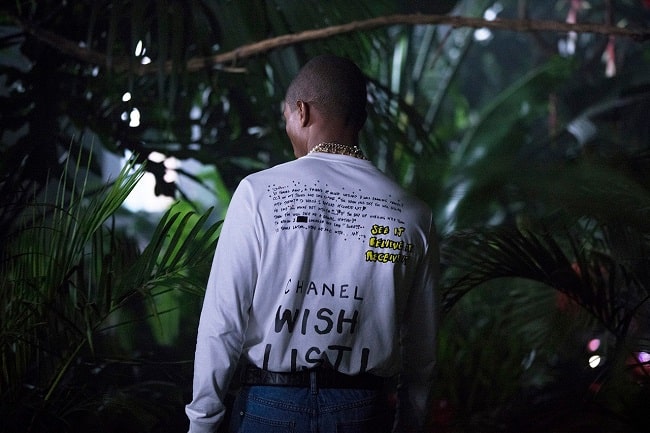 But, CHANEL-Pharrell – released globally on April 4th, after its official introduction on March 29th at Chanel’s first South Korean flagship store – isn’t another Louis Vuitton x Supreme. Although it has similar status signifiers – luxury brand teams up with one of the most successful music-to-fashion crossovers – we noticed some key differences: Mainly, although logos form the capsule’s backbone, it’s not as on the nose. You know what we mean. Bringing together two logos and fusing colour schemes don’t always lead to an interesting product. The latter point particularly sets Pharrell’s effort apart: It’s nearly all primary colour-based, with some bold purple, orange, and teal thrown in amongst the solids and cut-and-sew combinations. As such, the vibrant shades are the first thing to draw your eye – followed by the embellishments (more on that later) – and the logos wind up secondary. 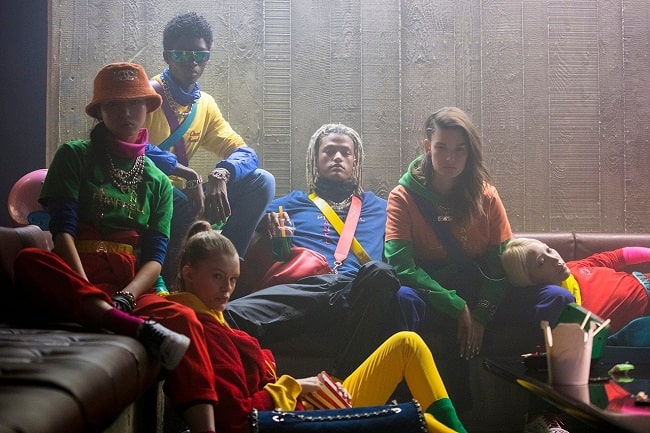 As a second point, we’ve all been hearing about how Chanel plans to seriously expand into menswear, without doing the one-off piece here or there. Pharrell dispelled this in a recent GQ France interview, further stating that he intends this as a unisex collection, inspired by both men’s and women’s silhouettes: “Like as a man, I've always wanted a lot of belts. But like I said, I got the joy out of wearing the girls' belts, not the ones that were super feminine, but they just made sense for my body. There's still a bunch of things that as a man, I would at least want unisex versions of. So, the inspiration for this was mainly my wish list, things that I feel like I've always wanted.” 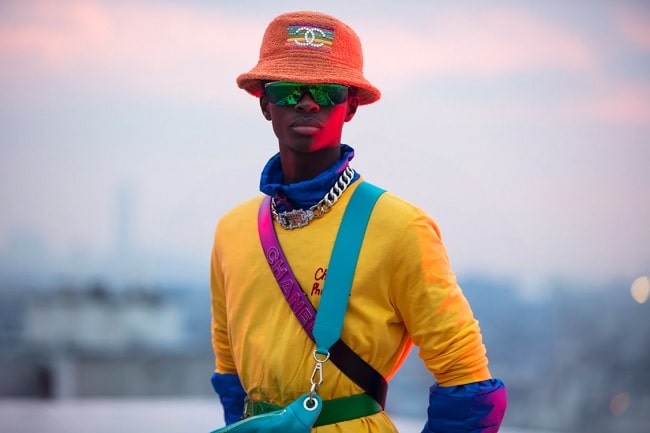 Part of Chanel’s SS19 oeuvre, CHANEL Pharrell’s unisex silhouettes aren’t anything to write home about. Mostly oversized fits fall in line with the 'bigger is better' streetwear aesthetic, often enveloping the wearer with colours fit for a rave. Denim, as well, runs along the 'dad jean' line with a narrow waist – accented with a solid-colour name plate belt – and wide yet tapered legs that fall to the ankles. On the subject of ‘90s rave, bucket hats make an appearance. Soft materials play off bright hues, while multi-coloured stripes and rhinestones outlining the interlocking 'C' logo give this throwback mainstay luxury appeal. 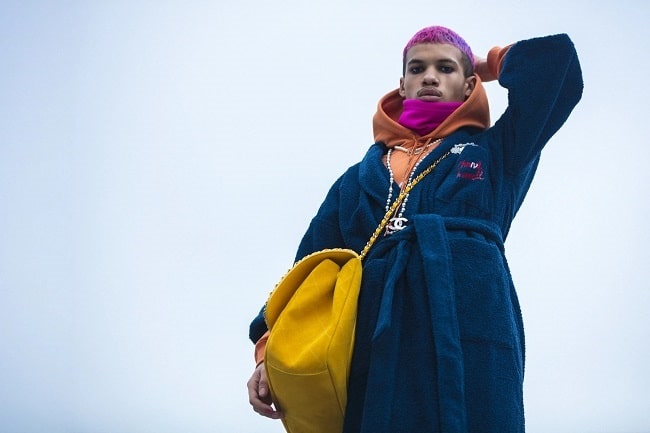 Yet, Pharrell doesn’t turn to a single source, instead liberally pulling and reworking references from the past two decades. Anime film Akira allegedly provides the framework – featured in the lookbook shots, the candy-coloured motorcycles make this allusion clear – while the silhouettes and chunky metal jewellery suggest some kind of hip-hop/rave hybrid. On top of this, the shades used and strong colour-blocking reference the late ‘90s/early ‘00s sportswear trend – itself another period hybrid, appropriating prep styles for the hip-hop crowd. 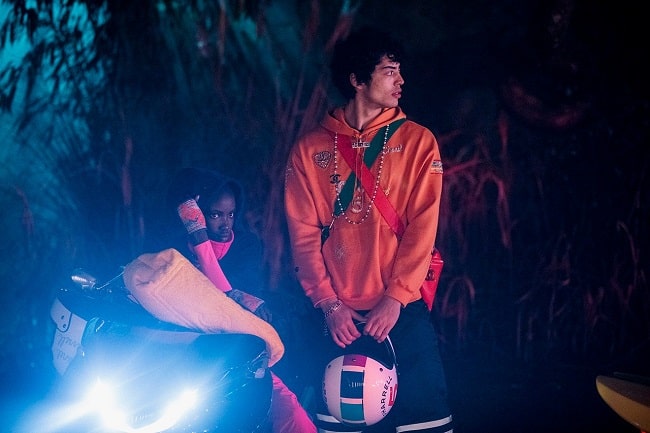 In spite of this confluence, none of it feels busy or like the Billionaire Boys Club founder is trying to do too much at once. But, don’t take that to mean the collection runs on the minimal side. Instead, tilted strong toward 'extra' without ever quite getting there, embellishments elevate it above rinse-repeat streetwear capsules. Embroidered and patch details – ‘50s-esque ribbon script on the jeans and a rainbow of colours on the bucket hats, for instance – segue into rhinestones and sequins, with graphics referencing key aspects of the Chanel brand – for instance, No. 5 perfume and the long-running double-C logo. Placement, on occasion, feels random, although it’s likely meant to be that way: The root of this collection goes all the way back to 2010, when the singer drew Chanel’s logo on his own shoes. 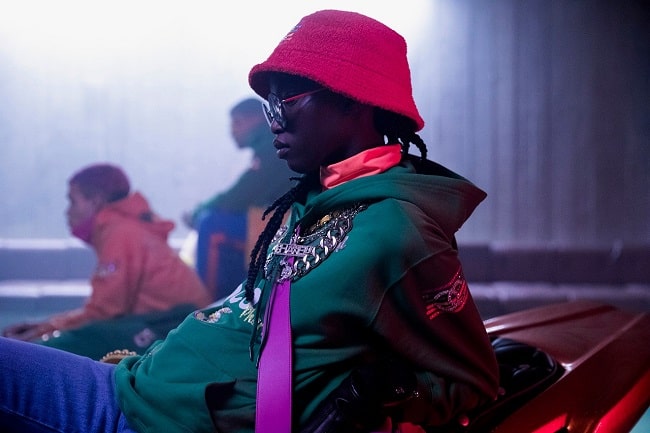 And, that brings us to the accessories. Beyond the headwear, shoes remain a cornerstone of this collab – also displaying a hand-drawn quality, similar to a teenager doodling with a pen or permanent marker all over his trainers. While it looks very similar to a collection Polo Ralph Lauren did earlier this year, these’ll soon be on the list of sneakerheads everywhere – trust us. We’re already spotting them for $5,000 USD on eBay. Outside of the trainers, loafers – in traditional and clog-like styles – have that shiny patent leather quality. A choice of bright solid shades and colour-blocking add to that statement status. Shoes aside, the bags – featuring Chanel’s recognisable quilted leather material – appear to fuse the body of a bumbag with the thicker strap of a messenger bag, thus making it more practical for everyday wear. Sticking to the same colour scheme, the sunglasses, using round lenses and a thicker frame, seem reminiscent of that Christian Roth pair Kurt Cobain wore 25 years ago. 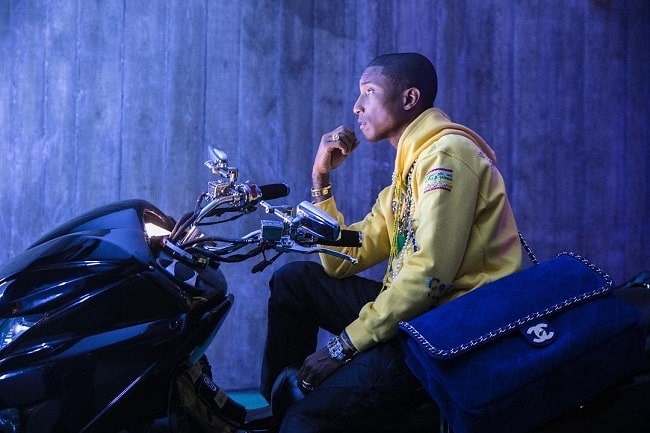 The jewellery portion – clearly an extension of the clothing’s embellishments – manages to be simultaneously retro – think large, chunky chains and long necklaces, not hugely out of place in a late ‘80s hip-hop video – and reflective of low-end urban trends in the U.S. – mainly, big, bejewelled logos and large nameplates. It could’ve been tacky – and, if Pharrell’s name weren’t attached, a majorly misguided culturally appropriated cash grab – but it ends up being a flashy and fitting, yet not totally overpowering finish.