DOES MENSWEAR HAVE SPACE FOR THE BODY POSITIVITY MOVEMENT?

Written by Ivan Yaskey in Trends on the 7th April 2020 / Does Menswear Have Space for the Body Positivity Movement? 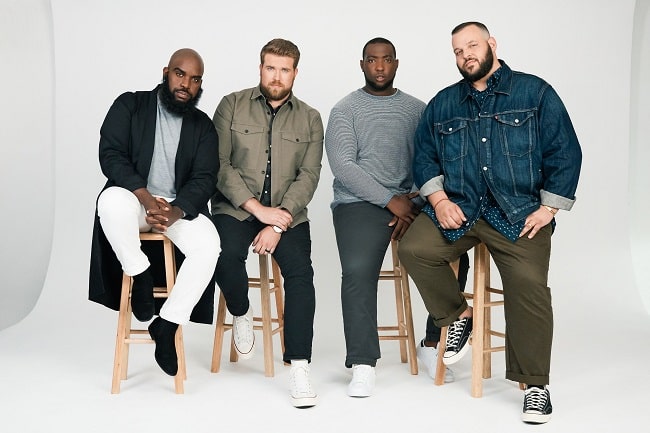 Body positivity, at least in perception, exists with the vast realm of women’s fashion and lifestyle spheres. It’s given way to fashionable plus-size clothing lines, as well as the health at any size movement. It’s also a space that doesn’t appear to include men in any form. And, logically, why should it? At least in the western world, overweight men face fewer penalties on the job, and for years, the assumption of men being able to make up for their perceived physical defects with humour and money has persisted. There’s a reason there’s no equivalent of a male trophy husband.

Within the fashion world, too, menswear at a glance offers a more diverse profile. Junya Watanabe cast older male models for his AW19 show, and you’re not hard-pressed to find retailers catering to an older male demographic. Shirting brand Claudio Lugli uses a range of ages and sizes for its eCommerce store, all while pushing more adventurous patterns, while Patrick James’ catalogue and website specifically cater to middle-aged men with whimsical tastes. Between all this, a veritable fashion magazine like Essential Homme has been known to interview older male actors without any hint of pandering or irony: Back when he was promoting The Florida Project, Willem Dafoe appeared for an interview in stylish threads, wrinkles visible, no mentioning of age, and basically existing without question. 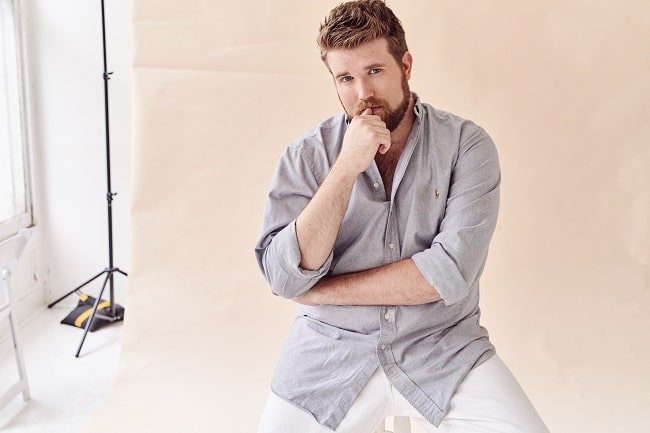 Setups like that don’t fully exist in women’s publications: If a female actress of comparable age were to appear, age and the lack of roles would likely come up, and whatever she’d wear would have to check off that mysterious not-sexy-but-not-frumpy box. Middle-aged women essentially disappear, except maybe to surface in Parade or a former-homemaker magazine. And, this doesn’t even factor in the diversity of body types. Until relatively recently, plus-size magazine spreads often left the models with few clothes, if they included them at all, or have featured straight-sized actresses in their body-positivity roundups. Nevertheless, while body positivity appears as a women’s-only space, the plus-size menswear movement has been gaining ground over the past few years, begging the question: “Is there room in body positivity for men?” 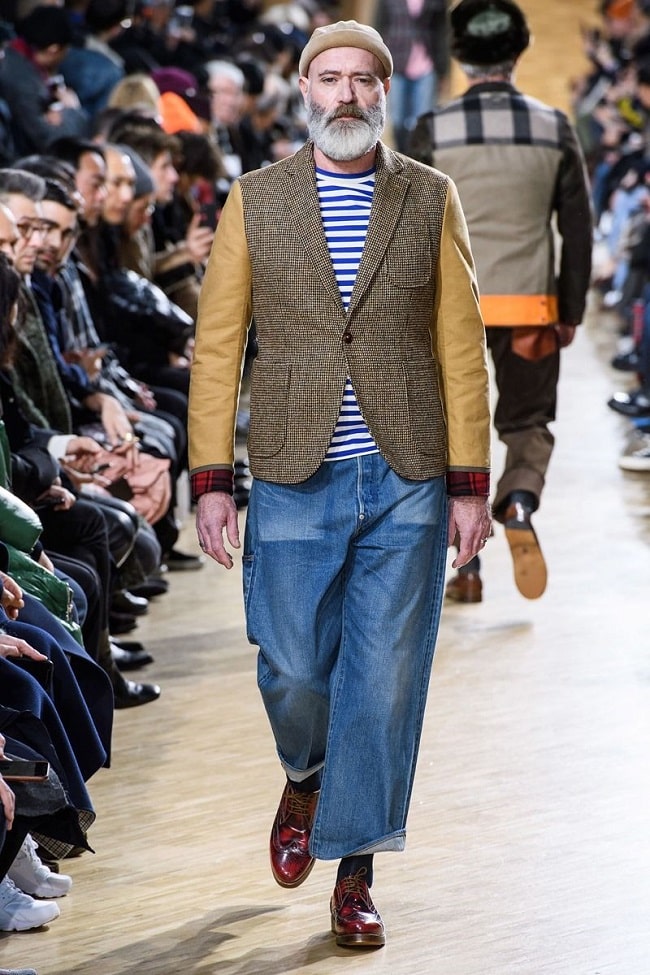 The media’s treatment of women who don’t fit the model-esque ideal has been relatively heavy handed for decades. For men, however, the attitude is a bit circuitous, with several elements thrown into the mix. It also hides behind the façade of a don’t-care attitude and toxic masculinity. These two factors obscure a more serious problem while presenting a single solution that, in fact, is cyclical: “Just work out.” The outlook has given way to what’s been dubbed the “Adonis complex” – or not being satisfied with your body, no matter how ripped and defined it gets – and likely plays a role in the number of men suffering from body dysmorphia. For years, studies have shown that men experience this condition at roughly the same rate as women. Contributing to this might be the models appearing in print advertisements and campaigns – and for which many brands design their clothes. Although menswear runways and eCommerce listings might show more diversity than what you’ll see in a comparable women’s effort, the man who stands just over six feet and has a 32 inch waist remains. He’s also someone who clearly works out – but at the same time, isn’t jacked beyond belief. Compared to the women’s ideal – the 5 ft., 11 in. model in a size 0 or 00 – this archetype is a bit more accessible – hence all the “just work out” advice. Nevertheless, the average male has a 40 in. waist and doesn’t see someone like him reflected in brand campaigns. 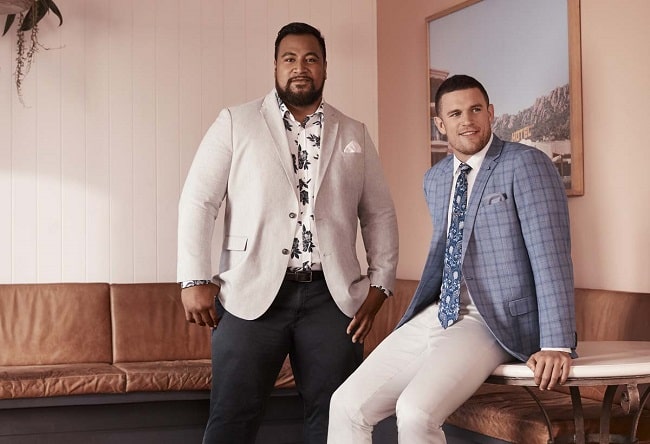 Statistics also back up these sentiments. A survey conducted by Thrive Global found that 26 percent of men aren’t comfortable with their body, with reasons ranging from weight to muscles to skin and grooming. More than half (58 percent) of the men surveyed wanted to be a size medium, and about a third revealed that social media negatively impacts their body image. Supporting these findings, a 2016 survey by the BBC found that boys ages 8 to 18 want to change their diet to improve their body image, with negative influences coming from their immediate social circle, social media, advertisements, and celebrities. As well, a UCLA study examined a similar age group in regards to working out: 90 percent of respondents did so to bulk up – a trend known as the “Superhero Effect” that correlates with the number of superhero flicks at the box office. As Healthline.com points out, weight and musculature aren’t the only issues affecting the modern man’s perception of his body. The hair loss industry is specifically targeted toward men, even though women also experience this issue, while advertisements for anti-ageing and cosmetic procedures have ramped up their male-centred efforts over the past two decades. 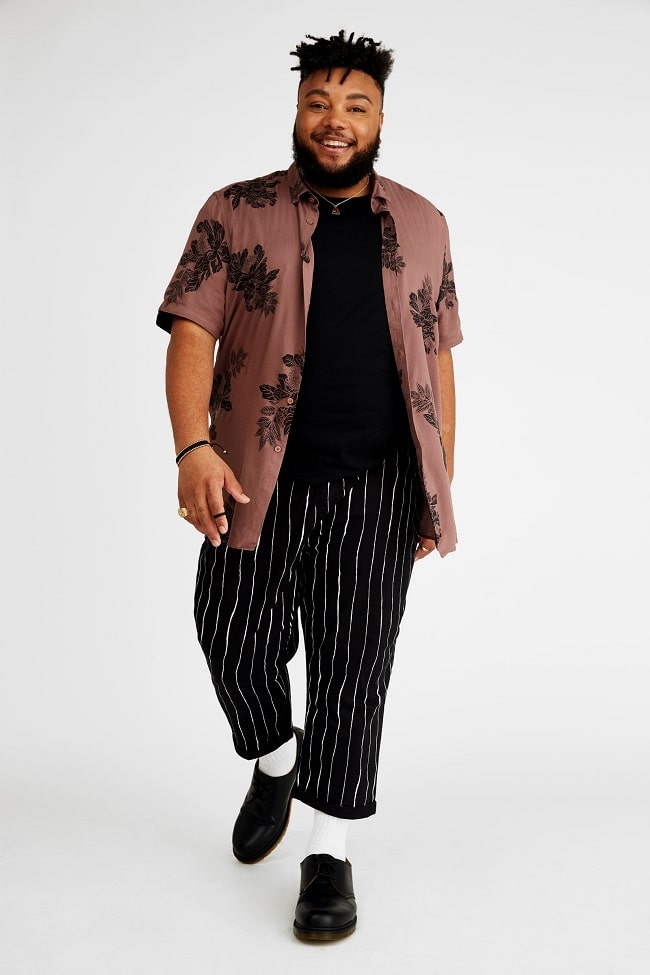 You don’t have to see the Instagram hashtags to answer this question. Men’s physiques have long escaped the collective wrath women experience whenever they gain extra weight, don’t have perfect skin and hair, or look as if they reached the other side of 30. And, while that appears to offer some relief and creates a fake sense of calm, it masks masculinity’s darker side: You’re not supposed to care about how you look and you’re definitely not supposed to complain about it. Body shaming? You’re tough – just let it roll off you and head to the gym. Balding or too short? Find a solution, be it hair implants or elevator shoes. Men do things – they don’t express emotions. Strictly in terms of fashion, these collective sentiments manifest in two overarching phenomena. One, that because men don’t actually care about how they look, many Big & Tall styles tend to be utilitarian – basics like button-downs, chinos, and plain t-shirts. Branching off from this, the Big & Tall model has traditionally been someone past the 6 ft., 5 in. mark – and he’s just as shredded as his shorter standard-size male counterpart. Overlapping with this, there’s the overhead sense that plus-size men can’t ask for what they want from retailers. Yes, Big & Tall stores abound, but the clothing, as we just mentioned, isn’t anything to write home about. Want patterns and colours, or some distressing and embellishments? Forget about it. 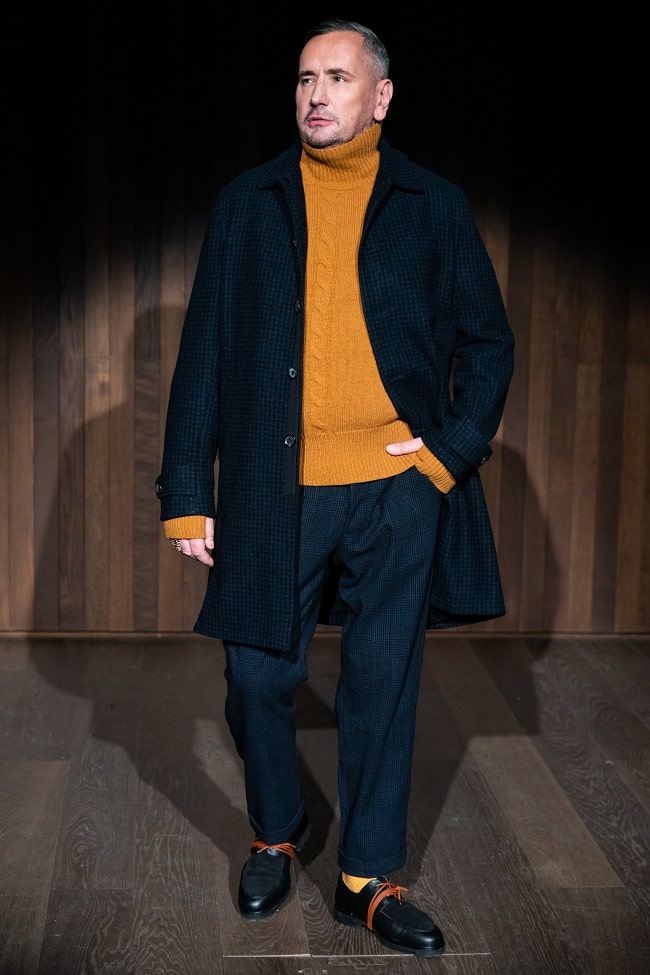 In an interview with Happiful, prominent plus-size menswear blogger Kelvin Davis, known for Notoriously Dapper, described this phenomenon as he went shopping for dress clothes before starting a new job. “While we were shopping, I spotted a bright red blazer, and wanted it so badly! Unfortunately the largest size they had was one or two smaller than I usually wear. I gave it a try and it barely went past my elbows,” he said, “I asked the sales associate to check if they had any larger sizes – which seemed to irritate her. She checked, before assuring me that this was the largest size they carried. With clear disappointment on my face I said: ‘OK, maybe I’ll try another store.’” Davis then explained that he wanted to post about the experience on social media, but decided not to. He knew what type of response he’d get – and it definitely wouldn’t seem like support. The experience, however, isn’t strictly anecdotal. A Coresight study about plus-size fashion markets found that demand for men is just a fraction of the $21.4 billion women’s side. Ignorance and long-held social assumptions aren’t just behind that trend, though. Retailers are hesitant to branch out into fashionable plus-size menswear, due to the change and costs required and the fact that the effort could inadvertently push out older male consumers. 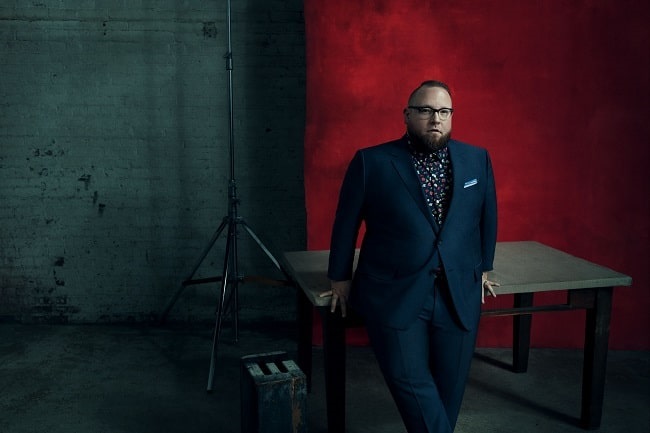 Yet, social media and plus-size bloggers have started changing that. Aside from Davis’s prominent effort, Ryan Dziadul chose to highlight plus-size men’s styles with @extraextrastyle. For a stronger sense of community, Bruce Sturgell created Chubstr, a fairly comprehensive plus-size menswear and lifestyle site. Riccardo Onorato opted for a more streetwear-heavy angle with Guy Overboard, crafting his vision around similar women’s body-positivity blogs. Between all this, Zach Miko, a plus-size menswear model signed to IMG Models in 2016, became its most recognisable face to date. Standing 6 ft., 6 in., Miko first got attention in a Target Big & Tall campaign, and has since been featured in Vogue and done work for Uniqlo. As well, New York Fashion Week held its first plus-size menswear event this past March, the World’s First Plus-Size MEN Underwear Fashion Show. The event, organised by Ryan’s Secret, showcased plus-size male models and highlighted both body positivity and the bullying issues many men contend with. 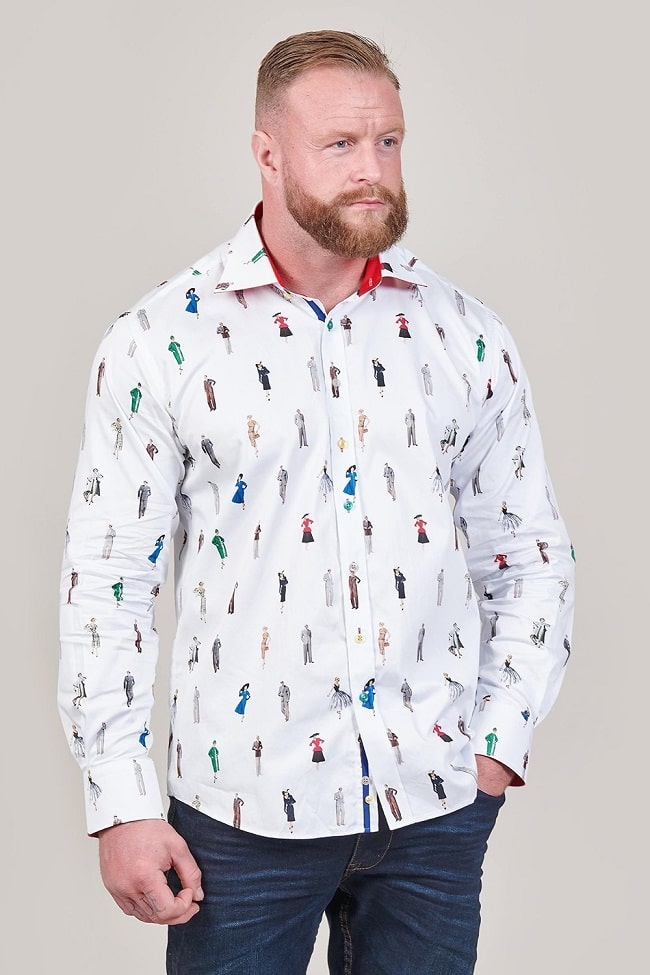 After American Eagle’s #AerieMAN misfire in 2016, which featured a campaign with plus-size male models for April Fool’s, ASOS Plus Menswear launched the following year with a straight face and trendier styles. The line included their own in-house brand, in addition to styles from partnering brands, in men’s sizes up to 8XL. Zalando also launched a similar effort, while Ralph Lauren, Banana Republic, and Madewell added extended men’s sizing. As well, Bonobos and Stitch Fix have started diversifying their menswear selections to accommodate non-traditional sizing and body types. Amongst dedicated brands, Destination XL, or simply DXL, has dominated the market for years. Yet, it’s also a brand known for sticking to the basics. On the more fashionable end, a couple of brands have launched over the past few years to fill this void. As one, Big Dude Clothing, based out of the U.K., was created with the goal of body positivity for plus-size men. As another, MVP Collections by Mo Vaughn Productions, launched in 2016, aimed for a more streetwear-centric approach and to provide bigger guys with more options. To date, their base consists primarily of men in the 5XL and 6XL range looking for something decidedly not basic and ordinary.

Guys, what size t-shirt do you wear? #fashion