NO TIME TO DIE: A JAMES BOND WATCH GUIDE

A LOOK BACK AT SIX DECADES OF 007'S WATCHES

Written by Menswear Style in Get the Look on the 23rd September 2021 / No Time To Die: A James Bond Watch Guide 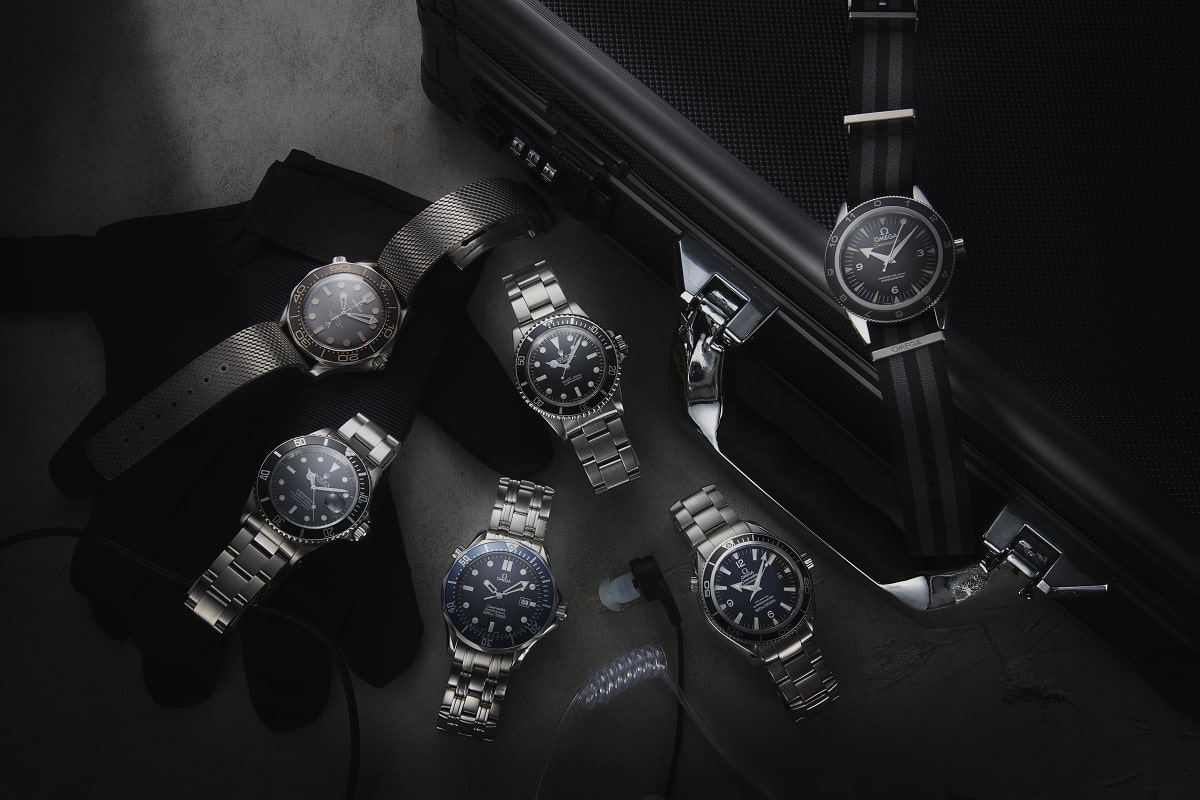 September 30th 2021 marks the UK premiere of No Time to Die - the 25th entry in the world famous James Bond franchise and purportedly Daniel Craig‘s final time playing 007. Marking the occasion, pre-owned watch specialist Watchfinder & Co. helps us take a look back at some of the most iconic watches worn by Bond over the last six decades, and the detail behind their 007 status...

The first reference to a specific Bond watch was made in Ian Fleming’s second book, Live and Let Die in 1954. It was a Rolex. Fleming himself also wore a Rolex, more specifically an Explorer I. So it was little surprise when Sean Connery sported a Rolex in the very first Bond film Dr. No. It’s said that the watch worn by Connery actually belonged to the film’s producer, Albert R. Broccoli, and was loaned to the actor for filming. Opposing rumours claim that the watch was in fact part of Sean Connery’s personal watch collection and he brought it on set for use during filming.

Regardless, the watch in question was an early Rolex Submariner 6538, also known as the “Big Crown” due to its very prominent winding crown. First produced by Rolex in 1955, and only manufactured for 4 years, this watch has become known as the James Bond Submariner. The highly collectable 6538 was also worn by Connery in From Russia with Love and the 1964 Goldfinger. Today, good condition examples of this limited edition Submariner have sold for over £400,000 at auction. The Submariner wasn’t the only Rolex to feature in these early Bond titles; Goldfinger’s Pussy Galore (played by Honor Blackman) can be seen sporting a Rolex GMT Master Reference 6542 in the film. 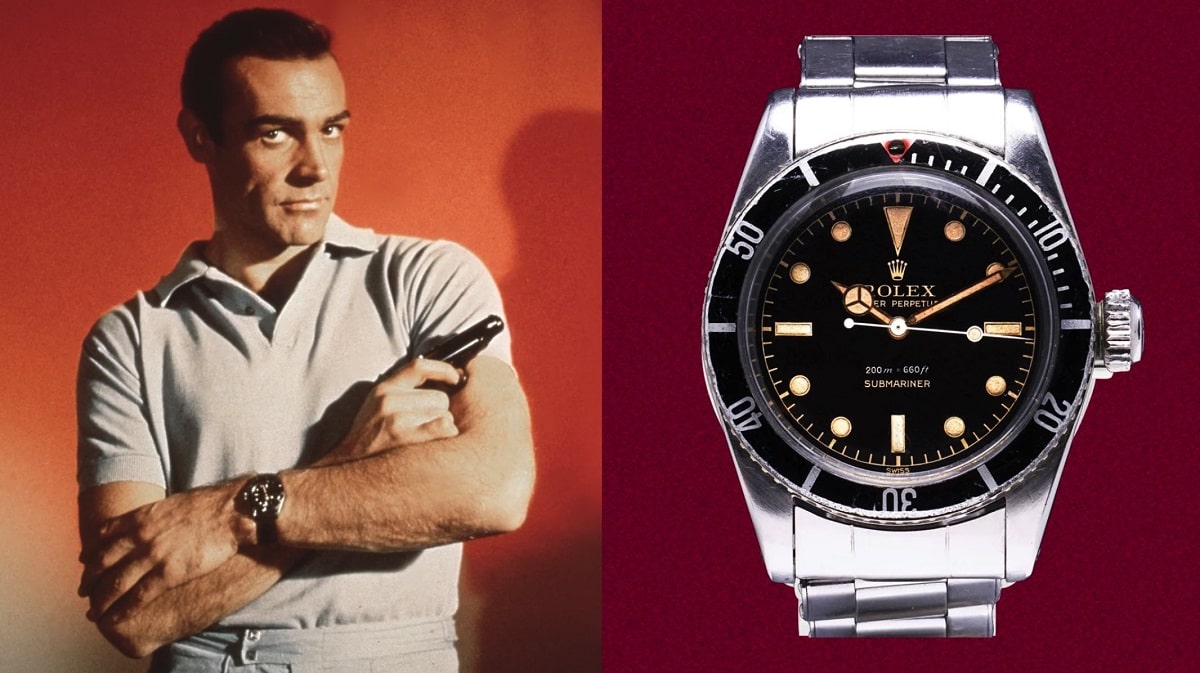 George Lazenby and the Rolex 6238 “Pre-Daytona”

Following on from the Connery era, Lazenby took over the role of Bond (albeit briefly) for On Her Majesty's Secret Service in 1969. And with the new Bond, came a new watch… This time, instead of the Submariner, Bond opted for a 6238 Rolex Chronograph. The piece, favoured in motorsport, is often described as a kind of “pre Daytona” as it has all the features of the enigmatic reference except the tachymeter bezel (a measure often used by drivers to calculate speed and units per hour). Bond’s 6238 is the only one of its kind – it was redesigned at the request of the producers to incorporate a red seconds hand which acted as Bonds built in compass. 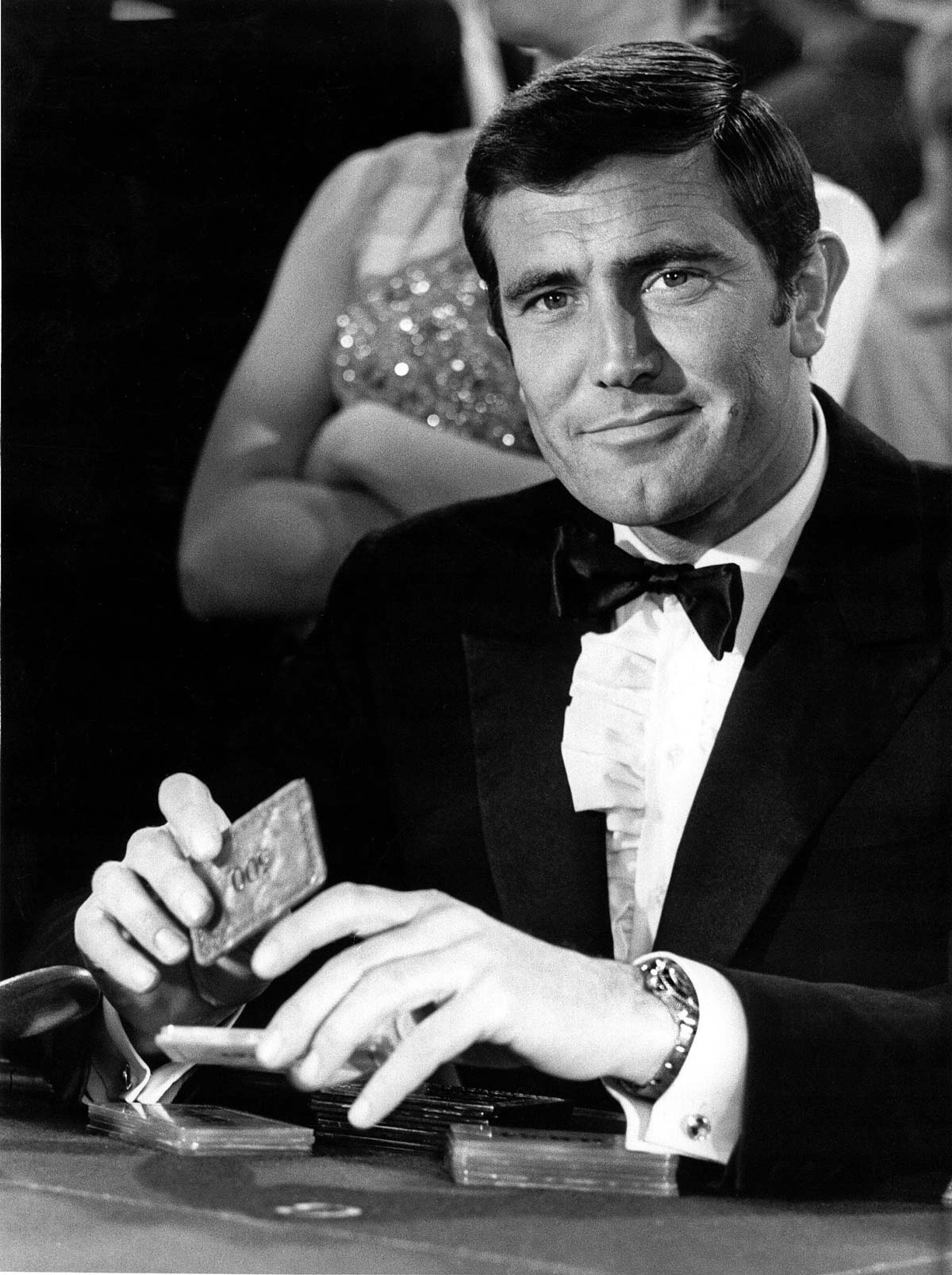 Roger Moore and his Rolex 5513 Submariner

It wasn’t until the early 70s that the Q Branch really started going to town on Bond’s watches. In the 1973 film Live And Let Die Moore wears a significantly modified Rolex Submariner 5513 which contains a high powered magnet and its very own circular saw, where the rotating bezel doubles up as the blade. Off screen the 5513 is often described as the ultimate tool watch - possessing nothing more, and nothing less, than exactly what is needed. With its time only mechanism, no date, a rotating bezel (which allows the timing of dives) and a locking bracelet clasp - it is an ideal diving watch in its purist form. It’s worth noting that it wasn’t all Swiss watches for Roger Moore’s Bond though; he was also seen sporting a Hamilton Pulsar in the opening scenes of Live and Let Die (before swapping to the famous Rolex), a Seiko 0674 LC (which also functioned as a message printing pager) in The Spy Who Loved Me and a Seiko M534 Memory Bank throughout Moonraker, which Q equips with explosives and a remote detonator. 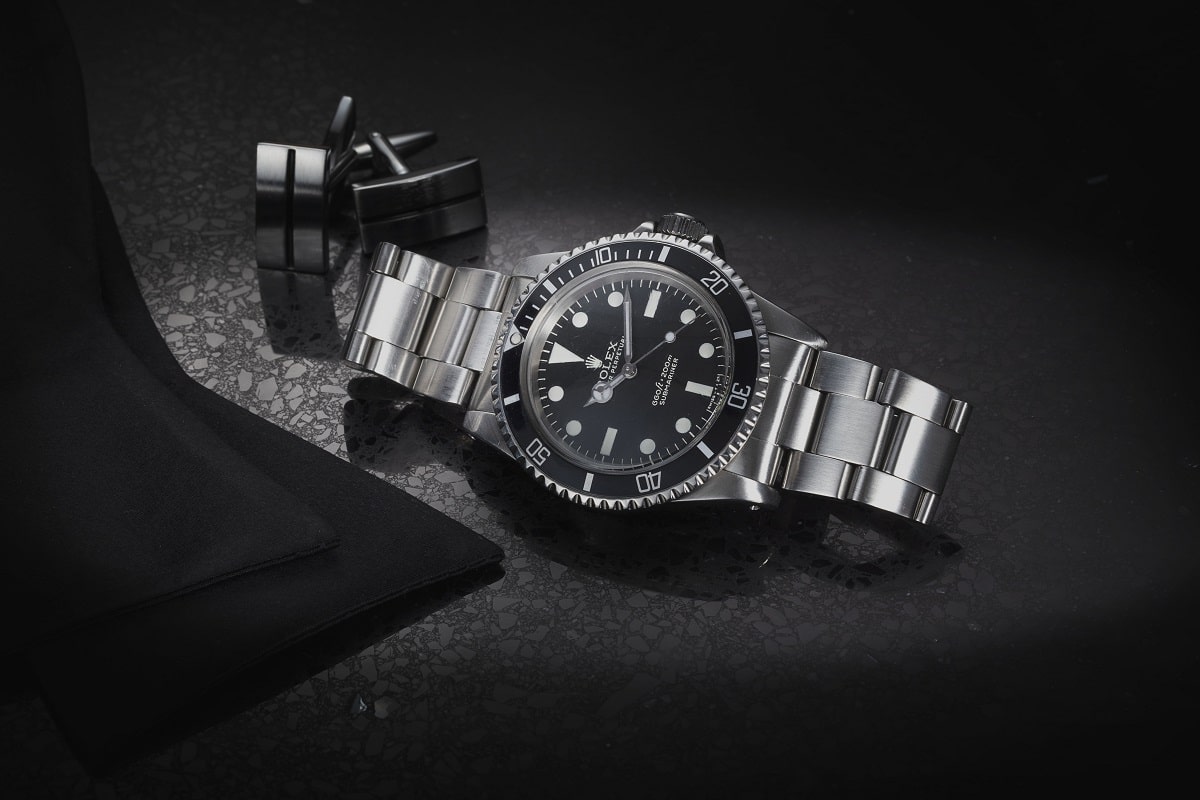 Timothy Dalton and the Rolex Submariner 16610

Timothy Dalton took over the role of 007 in 1987 serving up a darker, grittier Bond - truer to the original character portrayed in Fleming's novels. In The Living Daylights Dalton is seen wearing TAG Heuer Professional Night-Dive 980.031. The watch enjoyed approximately 10 seconds of screen time and it was the first, and last, time that Bond was seen wearing a TAG. In Dalton’s second 007 film, License to Kill, we see Bond return to the Rolex Maison wearing the newly introduced 16610. Produced until 2010 the 16610 was made from 904L surgical grade stainless steel (more resistant to corrosion and saltwater damage) and, for the first time, utilised white gold for the hands and markers meaning it wouldn't rust or patina over time. 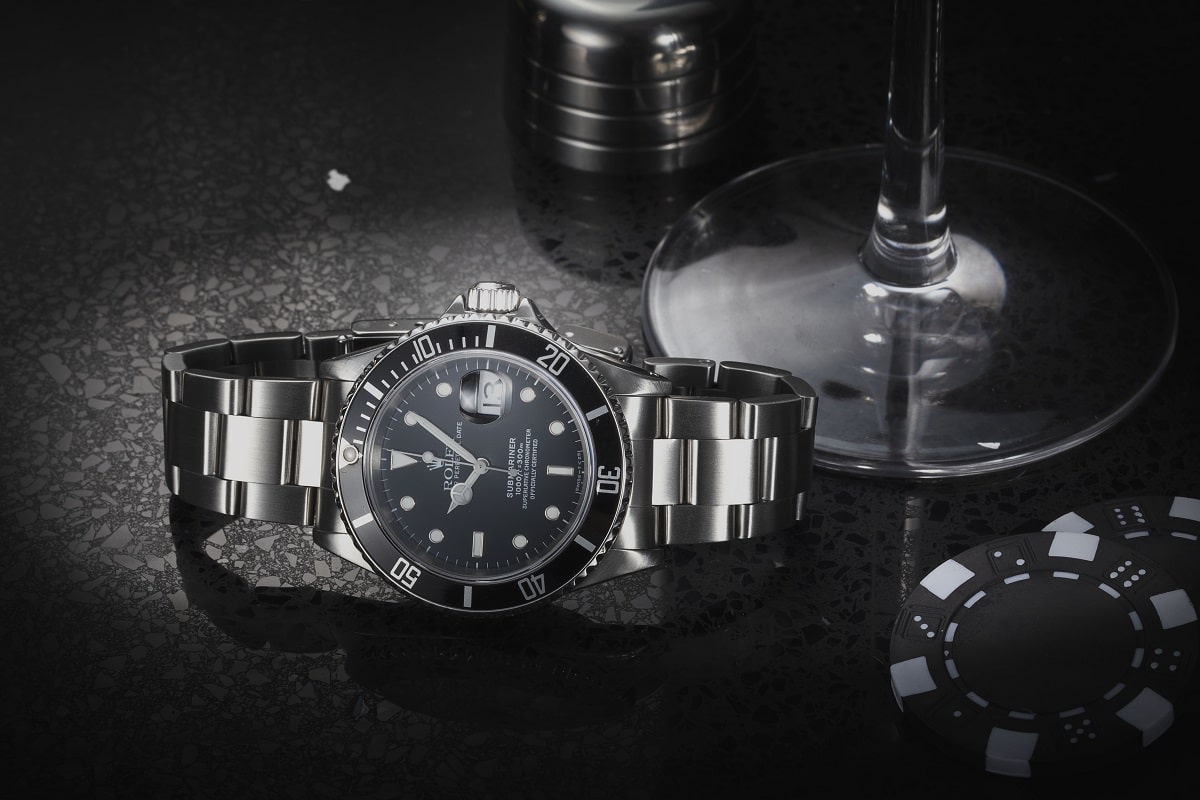 Pierce Brosnan and his Omega Seamaster

Goldeneye marked the first Bond film to feature an Omega on 007’s wrist - specifically an Omega Seamaster 300M Quartz Professional 2541.80.00 with a full size stainless steel case, blue face, blue bezel and stainless steel bracelet. Lindy Hemming, the Oscar-winning costume designer, responsible for selecting 007’s watch for the film said she felt that Commander Bond ‘a naval man, a diver and a discreet gentleman of the world’ would only wear the Seamaster with a blue dial. But it wasn’t just Bond sporting a Seamaster in that film… Bonds friend turned foe 006 Agent Alec Trevelyan (played by Sean Bean) is also seen wearing a Seamaster with a black leather strap. In fact towards the end of the film Trevelyan comments on the fact that Bond is wearing a newer model than him! Sticking with the Omega, Brosnan goes on to wear a Seamaster Professional 2531.80 Chronometer in Tomorrow Never Dies, The World Is Not Enough and Die Another Day. In these films we see Q add everything from lasers and grappling hooks to torches and detonating devices to the multifaceted watch. 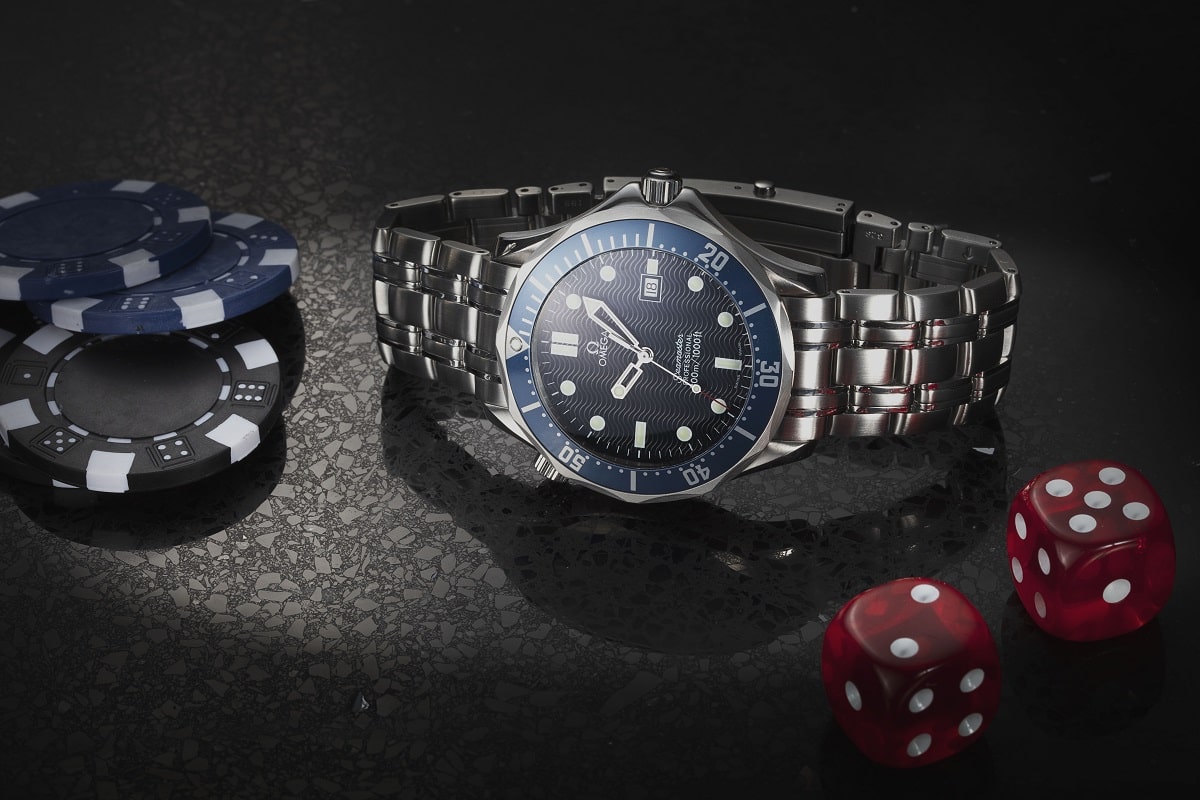 Daniel Craig took up the mantle of Bond in 2006 in Casino Royale. Craig’s Bond is introduced to the audience as a brand new 00 under the command of MI6 chief M (Judi Dench). With no gadgets or gizmos this new Bond sports a Seamaster Diver 300M (Ref. 2220.80.00) and a Planet Ocean 600M (Ref. 2900.50.91) in his first outing as the 00 agent. The Seamaster Diver was a 41mm with a blue face and a blue bezel on a stainless steel bracelet. By comparison the Seamaster Planet Ocean had a steel case, black dial, black bezel and a black rubber strap. In Quantum of Solace 007 wears another Seamaster Planet Ocean 600M (Ref. 2201.50.00) this time with a smaller case and a steel bracelet.

This trend continues in Skyfall with Bond wearing yet another Planet Ocean 600M (Ref. 232.30.42.21.01.001), this time in titanium, and a somewhat dressier Aqua Terra (231.10.39.21.03.001). Breaking from the new… Daniel Craig can actually be seen wearing a vintage 1965 Omega Chronograph in the closing scene of Skyfall as he drives away in his Aston Martin DB5 (of the very same year). Craig’s fourth outing as Bond in the 2015 Spectre features an Omega Seamaster Aqua Terra 150M Master (Ref. 231.10.42.21.03.003) and the Omega Seamaster 300 Spectre Limited Edition (Ref. 233.32.41.21.01.001). Notably, the Seamaster 300 finally marked Craig’s first tricked-out watch as Bond! It was designed exclusively for the film and featured a stainless steel case, a black and grey striped NATO strap (reminiscent of Bond's original NATO strap worn in Goldfinger and Thunderball) and came equipped, courtesy of Q branch, with explosive capabilities. 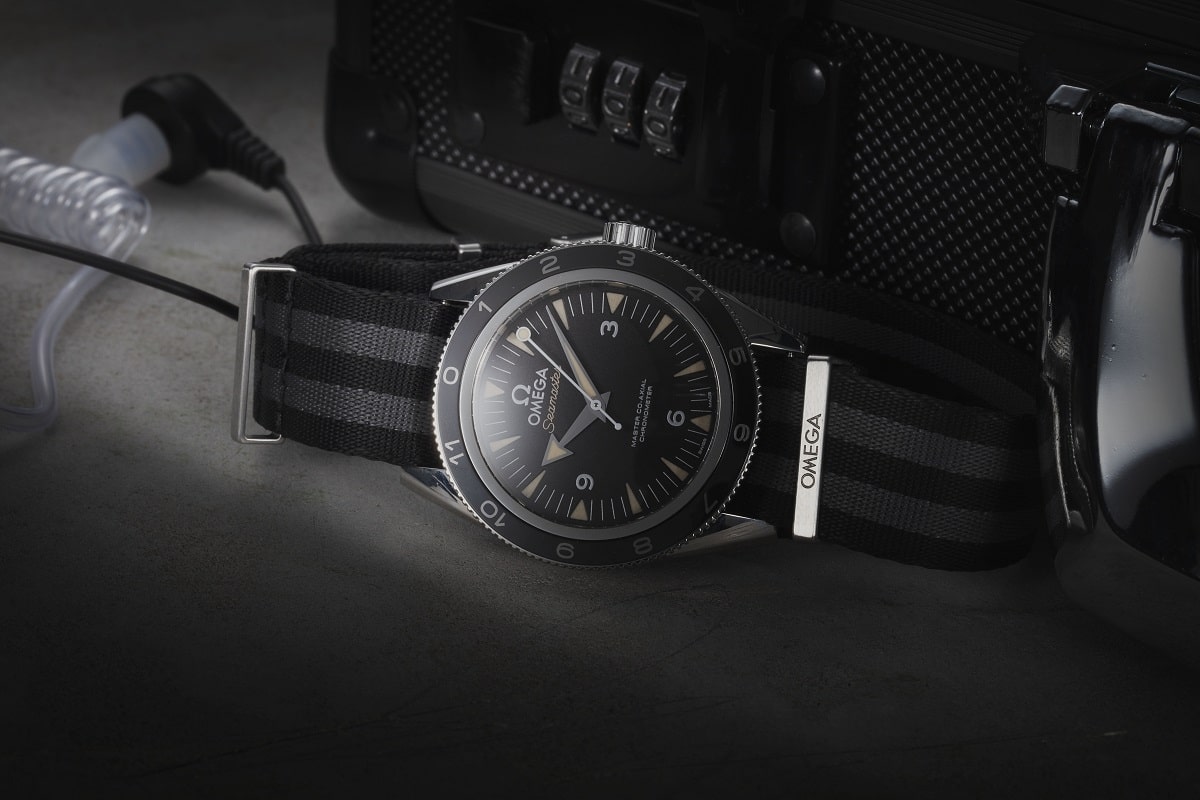 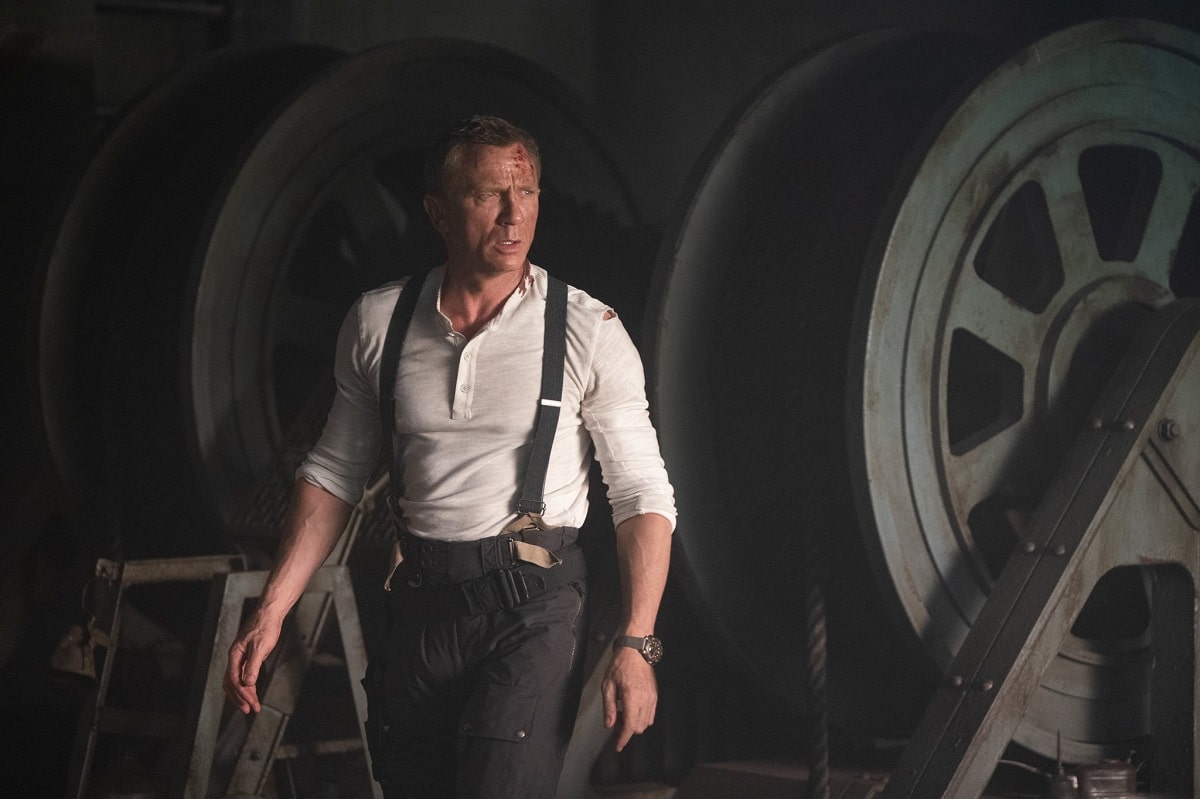 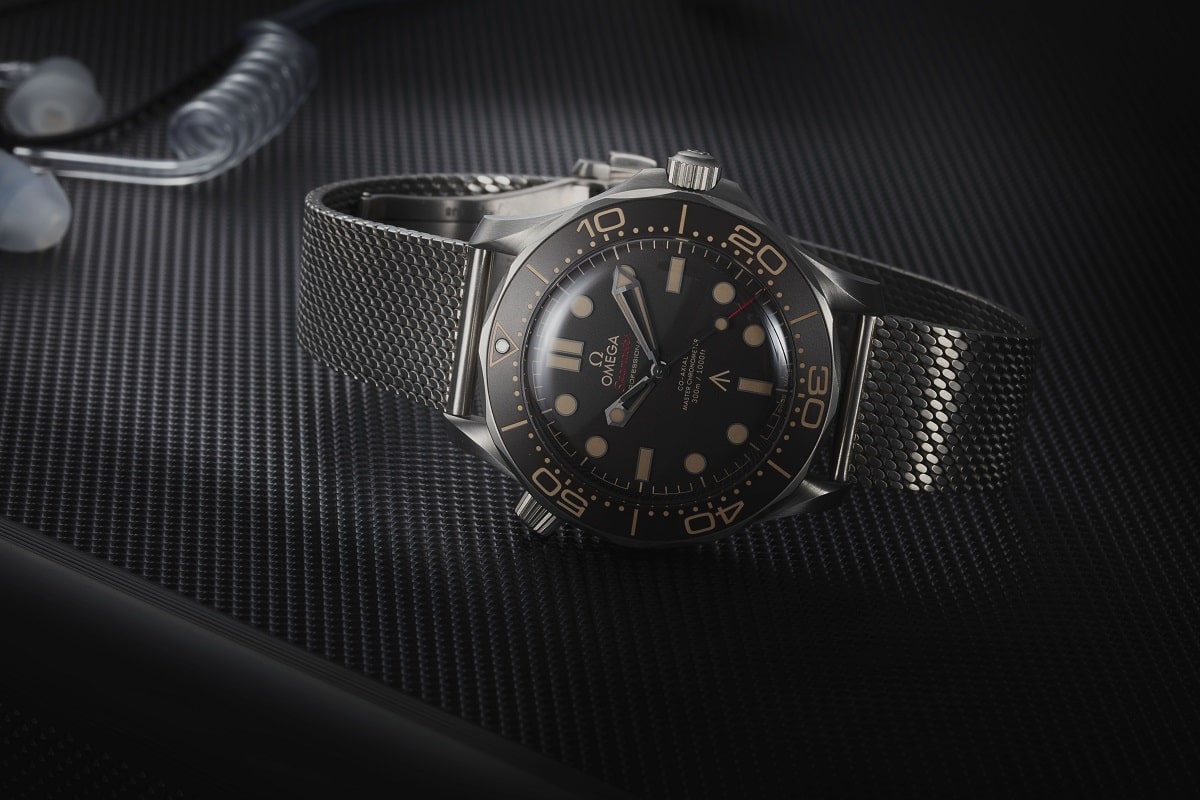