HAVE WE REACHED PEAK BRAND MERCH?

Written by Ivan Yaskey in Trends on the 12th November 2021 / Have We Reached Peak Brand Merch? 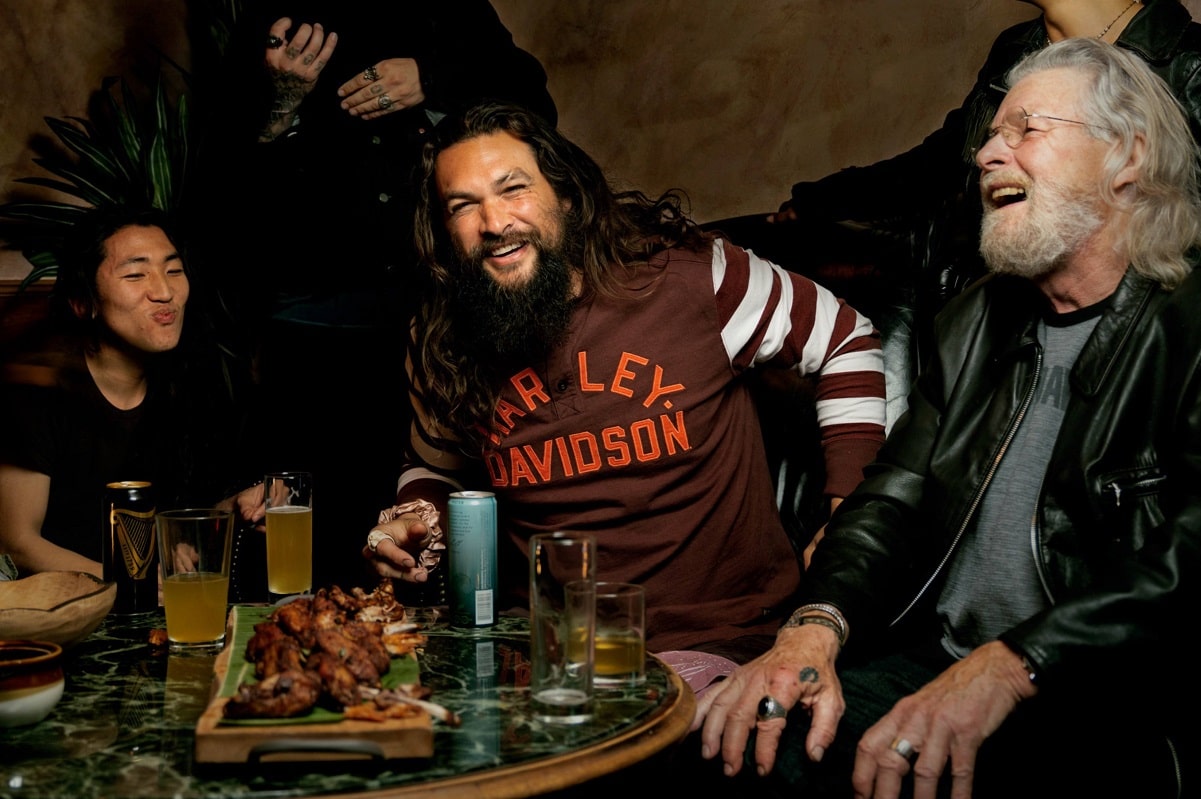 Brand merch is so pervasive, you probably don’t even know you’re looking at something created for promotional purposes. Up until about five or so years ago, brand merch tended to be divided into two camps. On one end, you had the band tee – something straightforward, screen-printed, and usually involving a crewneck, although baseball, V-neck, and tank top silhouettes had their place. Brands outside of the music world usually copped this format, perhaps using a more obvious, less statement-making design – for instance, a logo.

The other group involved promotional merchandise. You’ve received it, at trade shows or even through your employer. These looked even cheaper, and has the type of flimsy construction you’d expect a logo or even a plain typeface to be slapped onto. Totes would go through a few uses before the strap broke, or you’d keep such a pen on your cubicle desk.

Yet, toward the middle of the 2010s, something changed: Musicians and pop stars got more particular about what their merchandise looked like, often going toward streetwear and athleisure silhouettes. Then, there was the actual availability of these pieces: You couldn’t stop by Urban Outfitters or the closest mid-level department store to pick them up. You’d have to wait for them like any other streetwear drop. 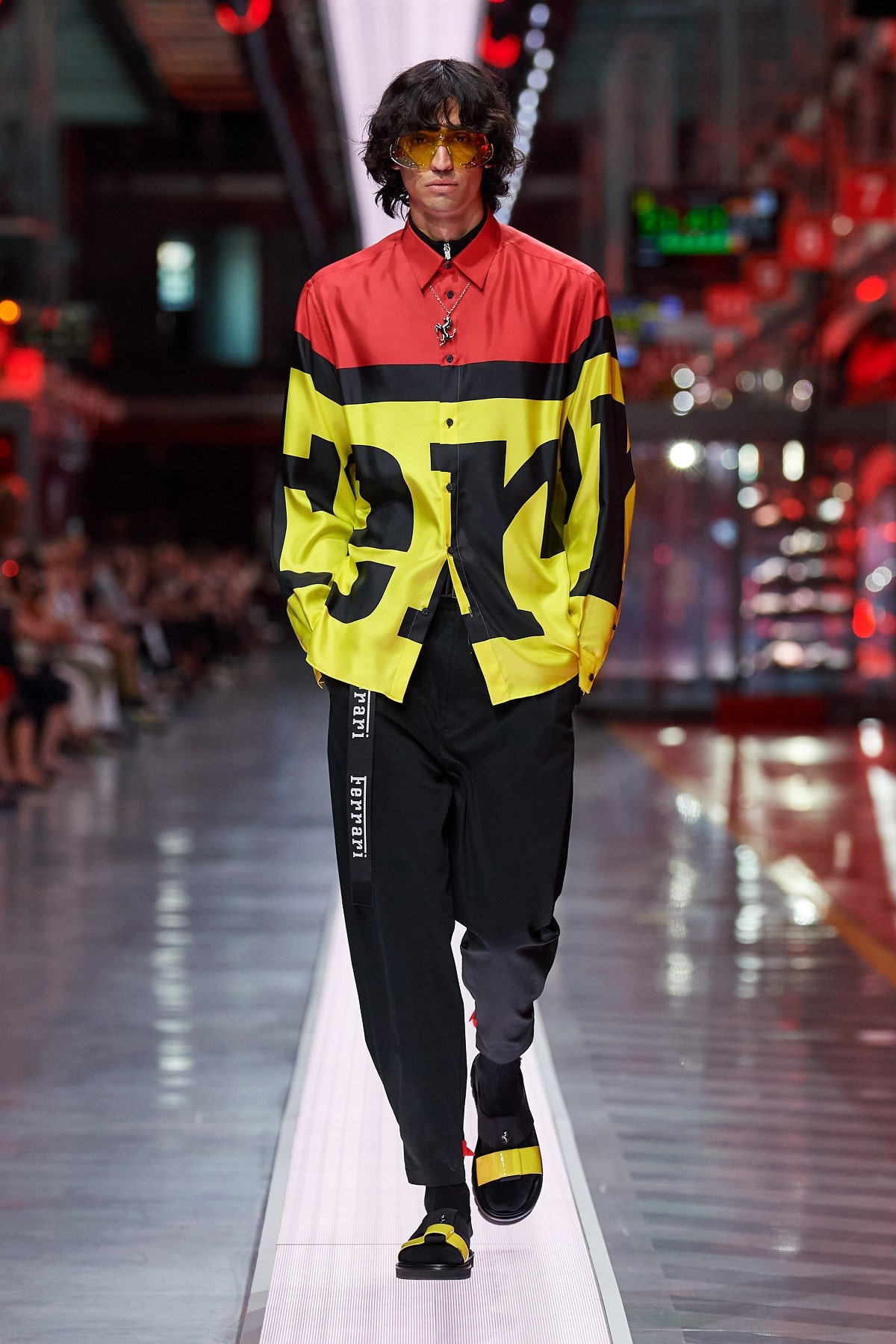 This development has resulted in what could best be described as luxury brand merch: It fits a lifestyle, it seems tangentially related to the brand’s mission, but it works as fashion first and foremost.

While we’ve seen everyone from skincare to fast food brands try this approach, Ferrari – the sportscar brand – is one of the latest to launch such a collection – even doing a Fashion Week presentation to formally announce its arrival.

Unlike logos slapped on poly/cotton crewnecks, some thought was put into Ferrari’s mostly unisex ready-to-wear offerings, with former Dolce & Gabbana and Giorgio Armani creative Rocco Iannone helming its developments. You get a sense of the vehicle’s speed and racing heritage, while Iannone incorporated materials from Ferrari’s vehicles and vehicle-inspired silhouettes throughout. Puma and Ray-Ban also contributed a few accessories.

To some extent, a car brand that’s moderately successful – unlike, say, the floundering Harley-Davidson, which also proposed such a move – Ferrari’s collection comes not from financial necessity or overt brand building but more so to get into the lifestyle-driven brand merch game. Explaining this to Vogue, Iannone mentioned, Ferrari is doing this “to enlarge our fanbase, including young generations and women especially – although women have always been part of our fanbase, but it has never been well told.”

Anyone who’s done marketing behind a product over the past two decades knows you’re not pushing an item – rather, it’s the lifestyle and whatever’s being sold fits into that. It’s no exaggeration to say that attributes aren’t important. Instead, it’s whether the consumer envisions themselves living that lifestyle – or, in other cases, being part of its fervent fanbase. Brand merch takes this literally. 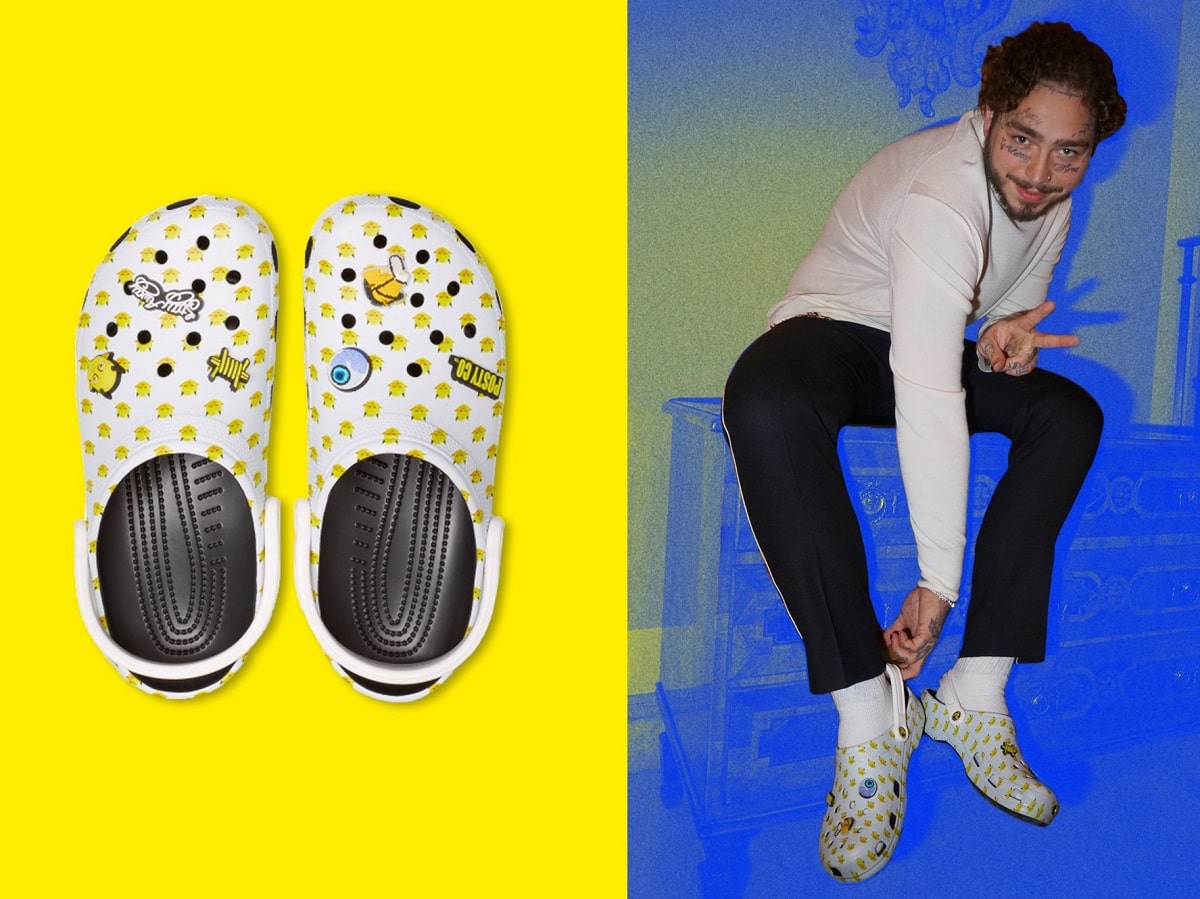 The Evolution of Brand Merch

Take a look at advertisements toward the middle of the 20th century. Most during this era highlighted in some form a product’s attributes and uses. A recognisable name helped something stand out among the competition. Into the 1980s, especially with luxury fashion on the rise, this approach shifted: You weren’t being sold on an object or service but more so what you could be and, indirectly, what that meant for your social standing. It was the difference between the suggestiveness of Calvin Klein jeans versus the ordinariness of Wranglers.

Brand merch, at least in the way we think of it today, started out with band tees. The present’s ubiquity didn’t exist, and most of the time, you’d have to catch a show to score some merch or go to an independent T-shirt shop. This aspect unto itself, no matter how basic the design was, signaled two things: You got to go to a show others didn’t have access to, and you have a preference for a particular band or genre. T-shirts, too, reflected the band’s type of music: Contrast the stark bleakness of a Peter Saville-styled New Order graphic or a Cure T-shirt versus the colourful, psychedelic visual stimulation of something for The Grateful Dead. These aspects resulted in a third effect: Identifying fans like yourself and sharing a preference for musical tastes. It’s why, once band designs started popping up at fast-fashion retailers, die-hard fans objected: Someone without this knowledge was allowed to enter their club through superficial aesthetics and lack of context. 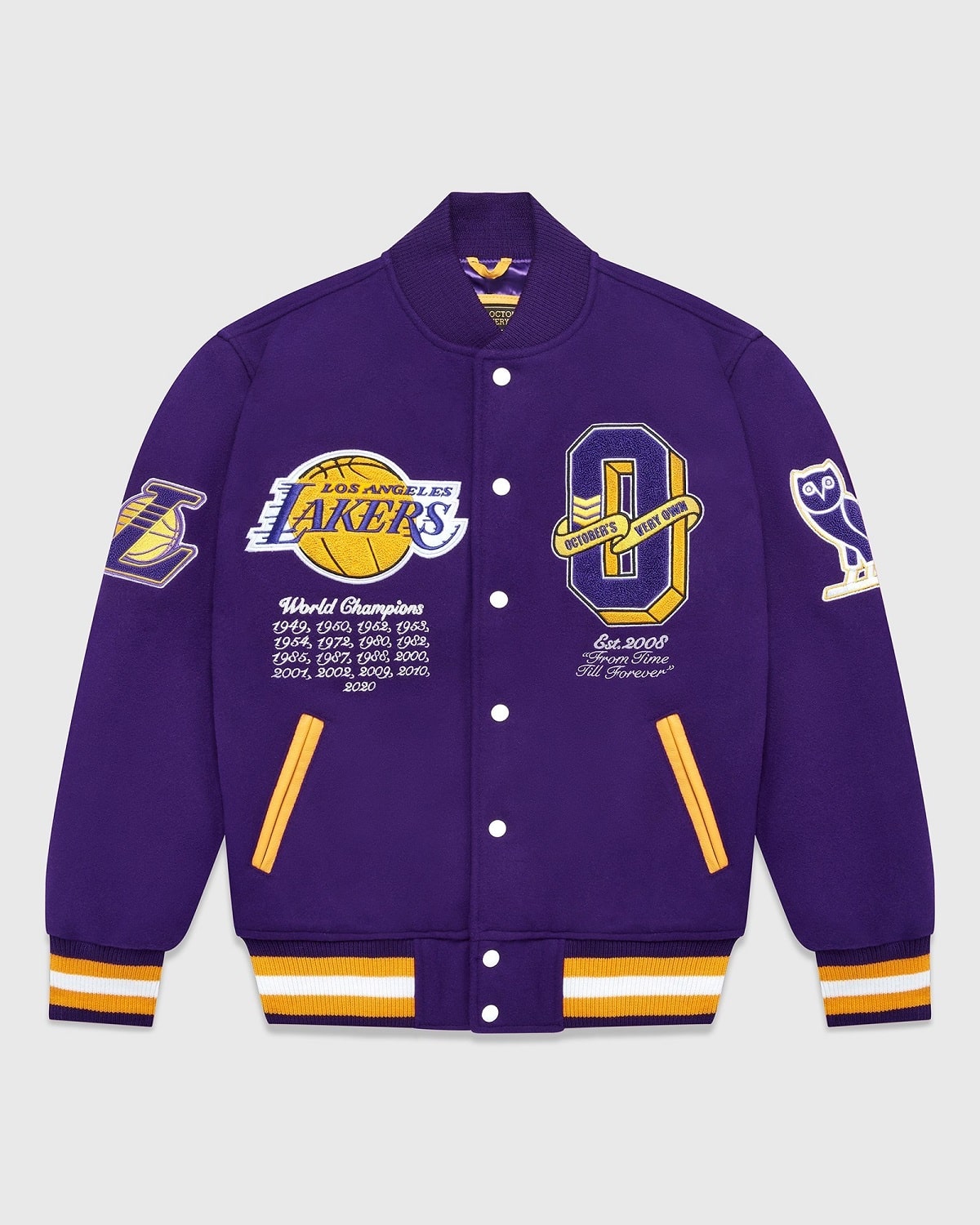 Alongside this, you had travel merch, suggesting you visited somewhere. This could be as mundane of a location as the Jersey Shore or the Hard Rock Café, or indicate your family had the funds to visit Paris or a luxury ski lodge, depending upon the season. Then, there’s college and university merch: Sometimes a cost-effective mechanism of affordably getting new clothes, and later, a way for you and your parents to indicate your alumni status and “elite” education. Or, more specific to the American South and Midwest, your college gear shows which local school team, regardless of your alumni status, you support.

Beyond these obvious points, apparel and beauty brands began developing a visual aesthetic unrolled through merch that complemented what they sold: for instance, the Brown Bag you received going to Bloomingdale’s or Glossier’s more subtle pieces that, if accompanied by poreless skin, made it clear you eschew drugstore brands.

Somewhere around 2015, however, brand merch shifted. Likely to distinguish itself from more accessible, fast fashion-sold concert tees, groups and pop stars began putting out more exclusive, more stylized pieces that looked like a designer had a hand. Beyond shows, these efforts were accompanied by pop-up shops – encouraging more of a drop format – or an artist starting their own brand. This latter effort has given us everything from Justin Bieber’s athleisure-centric Drewhouse and Post Malone’s multiple Crocs collabs to the powerhouse of Kanye West’s Yeezy pieces that don’t even require a new album to perform well. Due to demand and the aesthetic, high-fashion retailers like Ssense have started carrying exclusive artist merch.

Beyond T-shirts and tanks, this approach ultimately means that concert merch is a clothing line, from sweatshirts and hoodies to cardigans, accessories, and bags referencing an artist’s lyrics or album artwork.

So, then, the question then becomes, why just the music industry? Why not rebrand everything in such a fashion – exclusive lifestyle first, illustrating consumers’ taste and status? That’s what we’ve seen unfold – fueled by a combination of Instagram and drop culture – resulting in KFC-themed bucket hats and Crocs to the less clunky Ferrari ready-to-wear line. And it’s not slowing down: Any brand who thinks they have even a modest yet still strong customer base attempts to brand with merch. 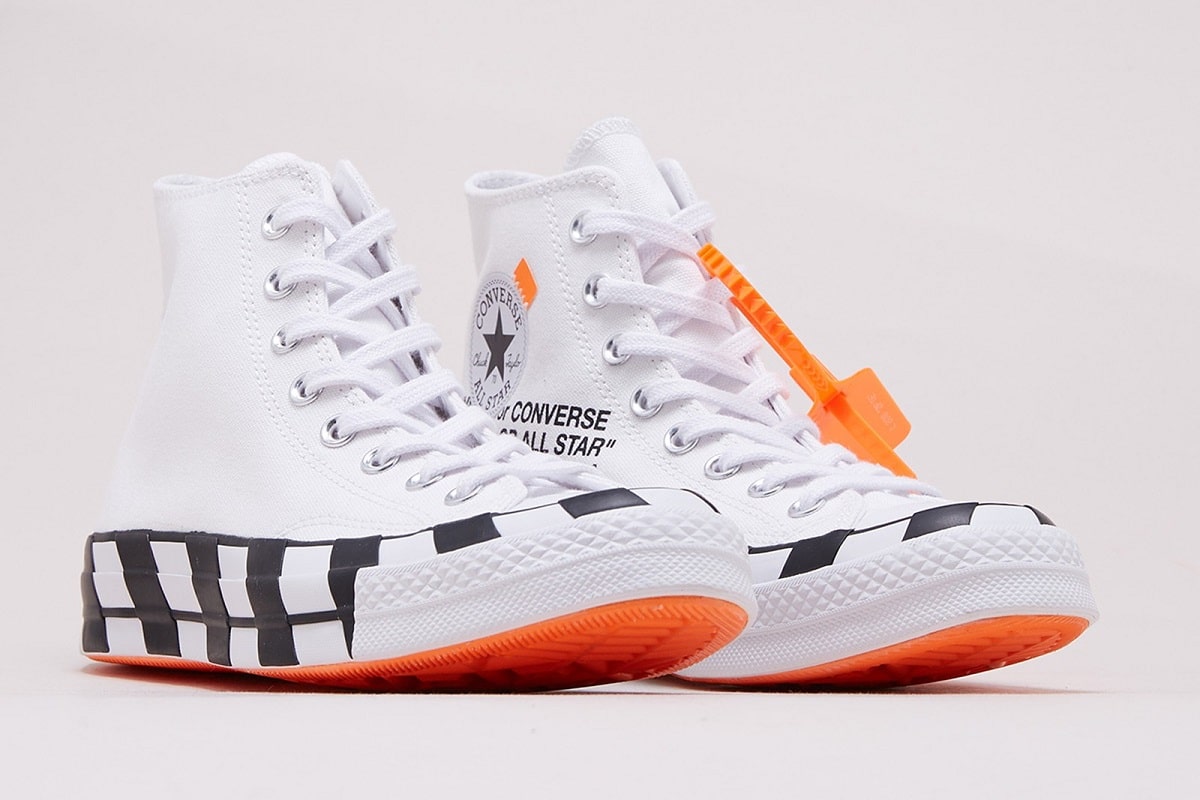 Unlike the band T-shirts of decades past or freebies passed out on university campuses, merch promotes an aesthetic first – one that hints at sleek product design and any associated lifestyle. Excluding fast-food streetwear collaborations, the result isn’t meant to be a walking billboard. However, the subtlety should be enough that consumers and fans of that brand get it and identify the design. As such, that “secret club” mentality remains, and shows that anyone who can create a product can also develop a line of related merch.

With the way inflation’s rising and salaries are stagnating, even mid-tier products seem expensive. For brands, this shift results in a quandary: How can you develop a following if the majority of consumers can’t purchase your product? Brand merch lets consumers who might not be able to purchase mid- and higher-ticket items into that exclusive club and simultaneously helps brands broaden their customer base. Essentially, brand merch develops allegiance even before said consumer has meaningful purchasing power.

As well, for a brand like Ferrari or even KFC, it takes far less effort – brain and manpower, plus their respective funds – to generate a merch collection. As such, this approach helps with increasing revenue from an existing or potentially curious fanbase. 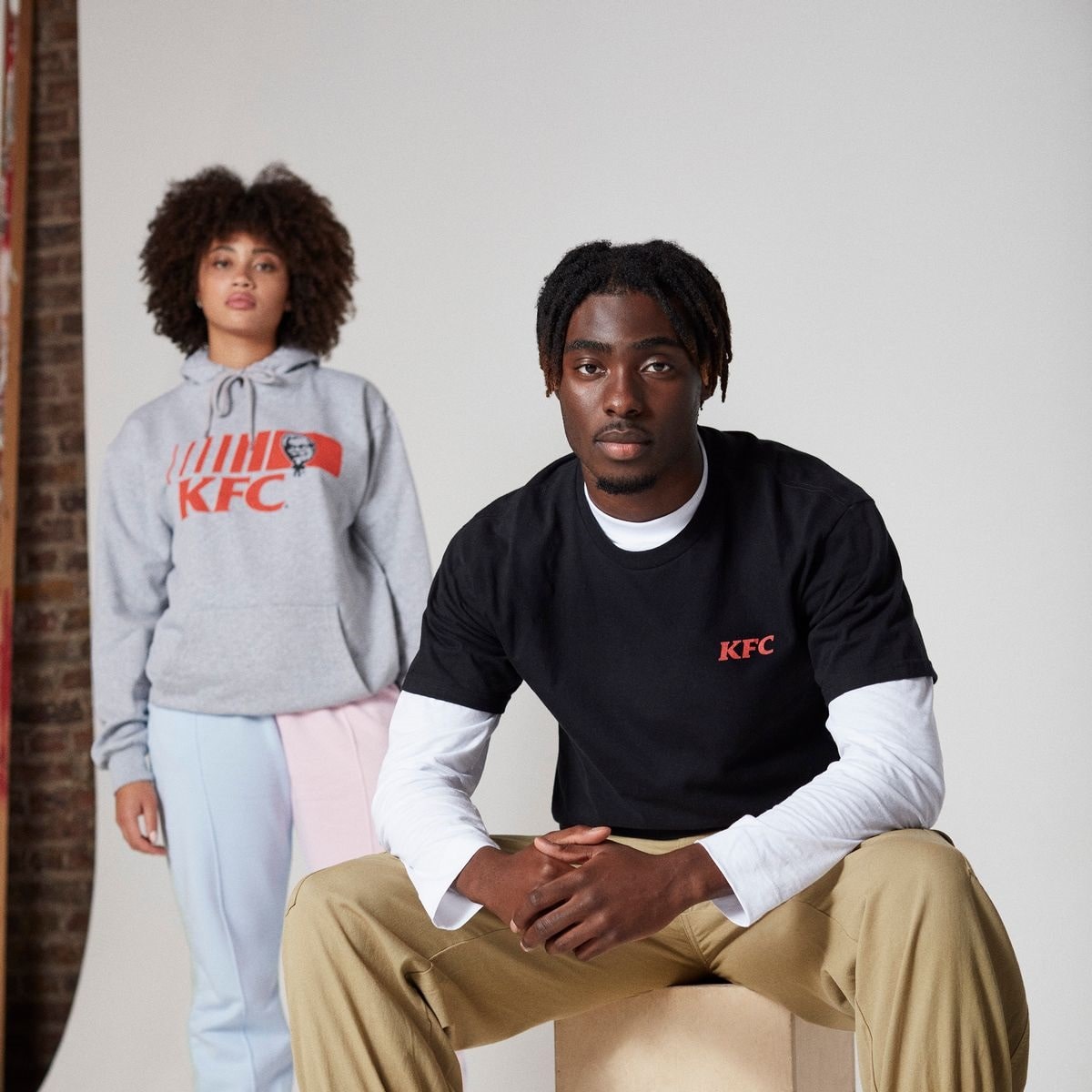 You can start with all those “corporations are people, too,” jokes, but brands that have developed a cult following flourish into communities themselves. Social media heightens this effect, and merch lets you see others reflecting you as you’re going out and about the world.

At the same time, not every brand is going to have this degree of following, and that ends up being the make-or-break factor for brand merch. Stuff we’re “meh” about, that’s everywhere, or that’s used for mundane purposes isn’t something we intentionally follow. It signals no particular lifestyle and, instead, functions as an expected background element for many of us. It’s KFC and Popeyes versus subway station-quality Church’s Chicken. Or it’s something heritage, like Ferrari or even Harley-Davidson, versus a Kia or Toyota. When consumers don’t deliberately pursue something, the brand just doesn’t seem exciting – both from its products launched to any clout and character that could fuel a line of merch.

Logomania back in the late ‘90s and early ‘00s showed that fashion houses could churn out lazy designs and consumers would still buy them up – and even seek knockoffs – for the privilege of sporting a brand.

These days, the design aspects are more refined yet simultaneously muddier. Virgil Abloh’s minimalist, product packaging-inspired aesthetic for Off-White showed that there’s a thin line between style and branding and managed to elevate an ordinary logo-centric design, no matter if it’s shoes or a T-shirt. As such, brand merch has taken this less heavy-handed approach, one placing vibe first over blatant product placement, resulting in something consumers can actually wear without it seeming like an overt advertisement.

Going beyond, consumer brands have teamed up with fashion houses to reach this elevated aesthetic, be it Arizona Iced Tea’s floral can print on sets of Adidas sneakers or Moschino illuminating the possibilities of a Budweiser Beer label. 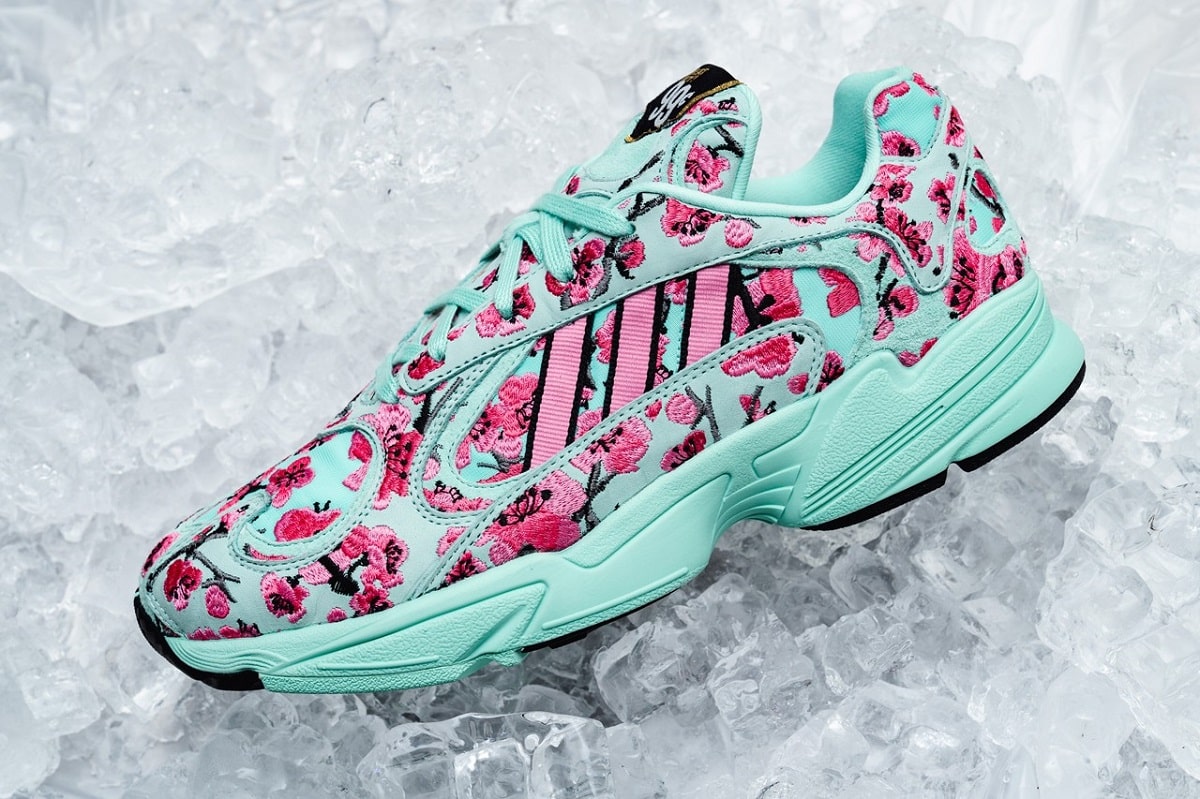 The End of the Trade Show Industry

If you’re someone who regularly goes to industry conferences, you’ll likely find that 2020 and 2021 shifted in-person browsing and events to Zoom-only schedules. The pop-up booths, branded tables, and brochures are all gone – or at least in storage until our world reaches a degree of normalcy – and brands need to think about how they can build that recognition. In turn, branded merchandise, either to purchase online or given away to devoted purchasers, ends up reinforcing a message or commitment to consumers. At a base level, this approach has shifted to branded hand sanitizer bottles but, more prominently, items you can also use day-to-day that keep that company and its product in your mind.