WHY THE TRENCH COAT IS AW17’S MUST-HAVE OUTERWEAR

A TIMELESS LOOK, POP CULTURE NODS, A REWORKED FIT AND ITS MILITARY ORIGINS ARE BEHIND THE RECENT RESURGENCE 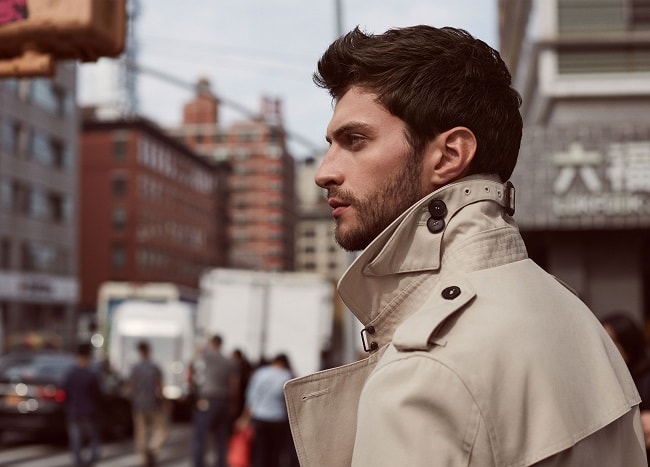 A scan over Autumn/Winter 2017 runway presentations highlights one pervasive trend: Designers are giving the trench coat a second look. But, while longer lengths characterise several types of winter jackets, the trench’s now-classic construction has been around for over a century: Typically, a double-breasted front with wide lapels and a belted waist for a closer fit. While a single-breasted style isn’t uncommon, its overall silhouette should fall to the knees or mid-calf.

Length, too, brings about an air of mystery: Think about its pop culture usage from Dick Tracy through the Matrix movies. Yet, while the jacket should cover most of your body, something oversized never looks or feels quite right, as if you’re slipping on something meant for a bigger man. These factors – a timeless look, pop culture nods, a reworked fit, and even its military origins – seem to be behind the trench coat’s recent resurgence. 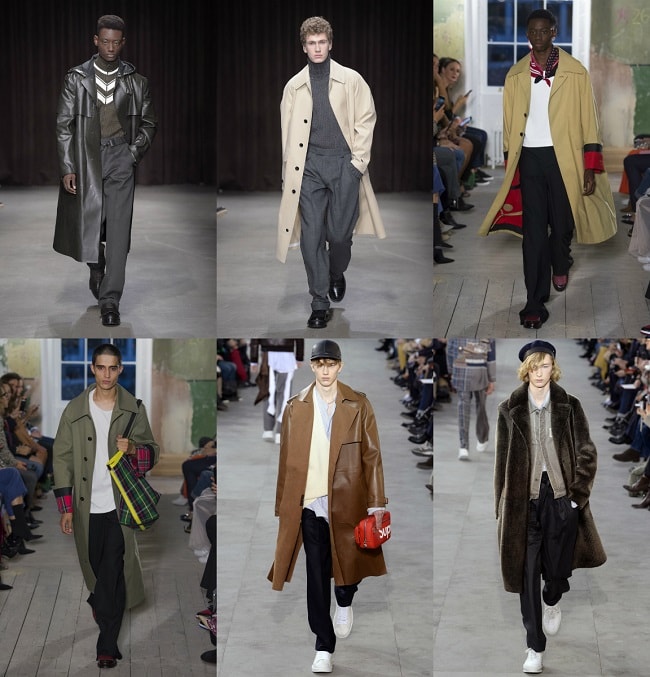 From camouflage patterns to epaulettes, there’s no military reference designers won’t toy around with. The trench coat – while originally invented in the 1850s - became an army officer’s raincoat during the early 20th century and it falls right in line with demand. But, what now seems streamlined and utilitarian goes back to World War I and the decades after. With a name directly referencing its use, the trench coat has a few points of origin: One, as military garb reworked by Burberry and worn by soldiers in the Belgian trenches, and two, as a lighter alternative to the heavyweight serge coats the French and British typically had. After the war, veterans adopted them for everyday use, and coinciding with this, the British Army allegedly ordered too many and sold off the extras to the public. These days, to emphasise its history and century-long familiarity, designers stick with this early template and, in many instances, play up its military background by adding epaulettes, gun flaps, or an olive drab shade. 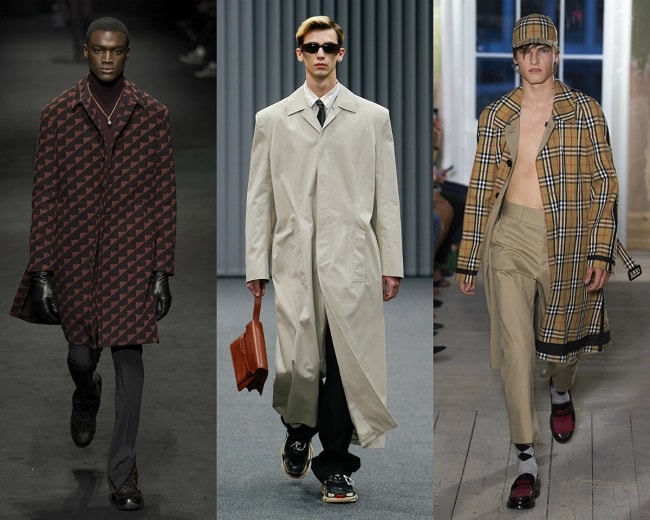 Going back to its military origins, the trench coat is meant to be a lightweight, practical garment that does its job – specifically, keeping you dry through all types of conditions. Its modern appropriation, in a sense, clearly capitalises off this: As runway presentations indicate, it’s not just a winter coat and, instead, makes a functional outer. Yet, if that description gets too close to gorpcore’s nature, fear not. The puffer jacket’s shapelessness is thankfully absent, instead replaced by a structured, flowing fit that can be belted or worn loose. This baseline then drapes over your suits and work garb without seeming like you’re covering your blazer with a sleeping bag, and can be adjusted to those days you’re out and about in just a sweater or button-down and chinos. And, in line with AW17’s greater focus on layering, it fits in through more classic and overlapping, experimental combinations. 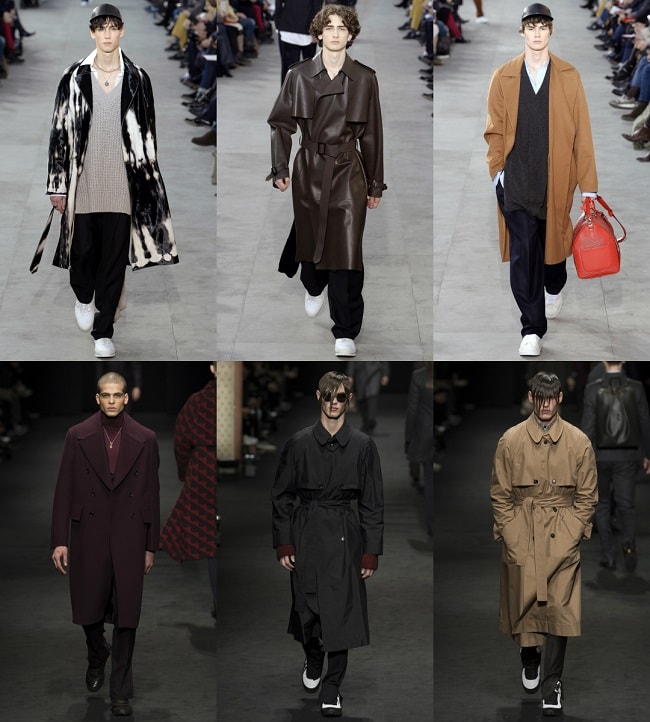 More Than One Style

For decades, a trench coat was just that – perhaps available in a few shades or lengths. And, while many still regard it as a classic, there’s always room for some kind of variation. AW17 presentations, as such, make it clear there’s no one way to do this trend. As a starting point, there’s Boss’ New York Fashion Week show that, with an overarching nod to ‘80s power suits, opted for a larger, boxier silhouette with flannel lining. Or, at Milan, Versace AW17 indicated that black and tan aren’t your only colour choices. Rather, the quickest way to doing head-to-toe purple or red is simply tossing a trench coat over whatever you’re wearing. For another theme, the leather trench coat is now more than a figment from the Matrix and Blade movies. From Balenciaga and Vetements through Louis Vuitton and Versace, its construction references the futuristic character of these 15-year-old flicks without making a direct allusion and expands the material possibilities for this menswear staple. Essentially, the badass vibe your motorcycle jacket gives off becomes longer and provides more coverage. Along with these possibilities, the “reconstructed” trench coat adjusts the standard form. Sleeves may be cut wider or feature barrel cuffs, resembling those on a button-down, while the body may include more flaps and pockets. Or, consider the length: While this garment, on a more practical level, should extend to the knees, shorter varieties cut it off closer to mid-thigh. 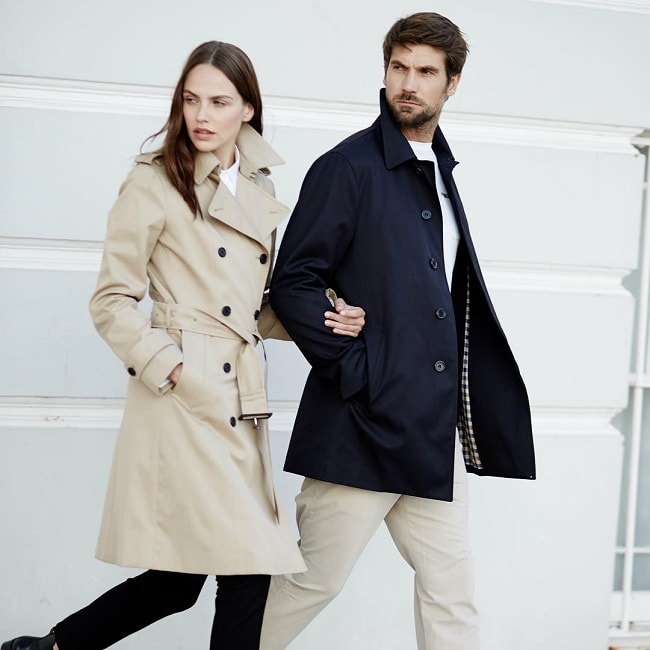 What use is a jacket if it won’t protect you against the elements? As materials like Tweed indicate, you can wear something stylish that keeps out the chill and drizzle. Trench coats, in the same vein, may be made out of a lighter-weight fabric, but the concept isn’t drastically different. What seems streamlined and layers well often comes with wind-resistant and water-repellent properties, or simply a weatherproof design. Some, such as the Thomas Pink Phylias Mac, go a step above and into more technical territory. The Phylias Mac, for instance, combines its own Storm System™ cloth with seam-sealed construction to fully block out the elements. And, much like a shell garment, its packable design compresses down into a much smaller pouch. As such, when you’ve got this jacket over your best suit, its treatment should cause any moisture to bead up on the surface and prevent wind from passing through, thus helping you get from point A to B dry and looking sharp.