MENSWEAR TRENDS ON OUR RADAR FOR SS20 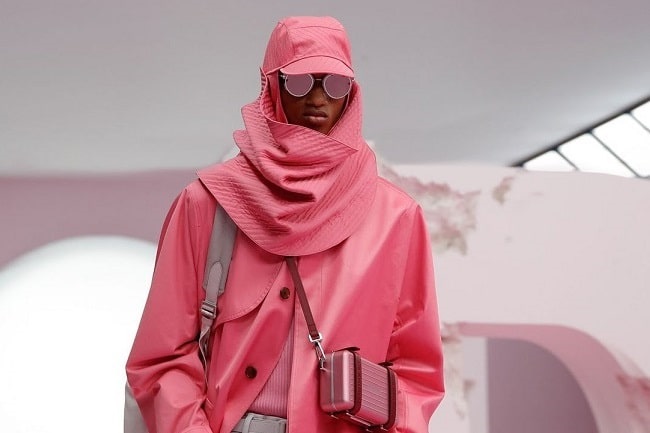 From the trends emerging last year at Fashion Week, Spring/Summer 2020 will be a period of unrestricted escapism. Some of it is pure fantasy - as fashion is by nature - and other parts are quite literal: The wider silhouettes have less shape, the fabrics so light you can see through them, and the masculine/feminine dichotomy so blurred, there’s no point in even mentioning it, as demarcations no longer exist.

What’s traditionally masculine looks and feels softer. What’s traditionally feminine no longer feels secretive and dirty, and it’s all so inverted and blurred that the new unisex or the new androgyny is just fashion – anyone can wear it, as long as it’s in your size. As we wait for the temperatures to drift above freezing and the snow to melt, here’s what we’re forecasting for this coming spring. 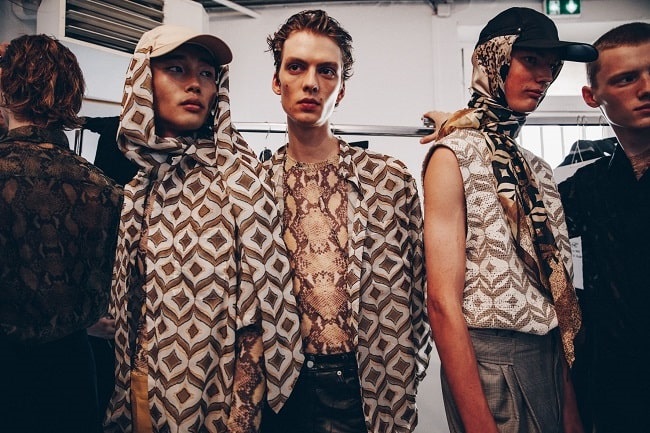 It’s not quite a response to the pop culture “soft boy,” but rather, a mishmash of the party suit and last year’s casual suit that ends up feeling like loungewear and looking so louche-y a shirt isn’t even required underneath. The “soft” here enters from multiple angles. The material’s intentionally not the stiff, structured fabric you’re used to. Satin or velvet cascades down, as if you’re wearing pyjamas or a track suit finished with a double-breasted closure. And, on the subject of double-breasted jackets, the two rows of buttons have given way to a partially wraparound front with no true hard edges, except for the lapels and where the folds of fabric overlap. The second perspective comes in the colours, prints, and details. Although no one’s saying you can’t wear navy – and, in fact, black velvet itself is particularly rich and tactile – SS20’s interpretation centres on an ice cream shop-like palette of pastels: cherry pinks, lemon sorbet yellows, and mint greens. Ruffles and lace details hammer on this garment’s strong feminine leanings. 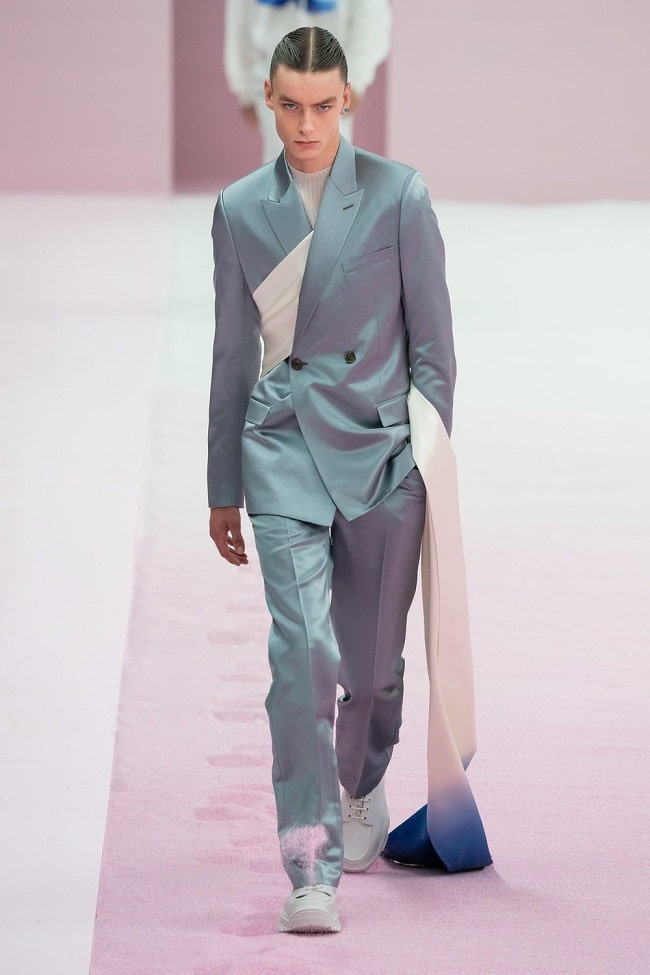 The methodology differs, but the result is basically the same: Mottled, in shapeless patches of colour, with no clear symmetry. Some bleeding of shades exists, but not to the point the print resembles ombre. Character wise, there’s a workwear element about it, like you’ve been a house painter for a number of years and have a trusted pair of trousers or a work shirt that’s so splattered it’s beyond uniform. Or, the flipside of this is, splatter and tie-dye are relatively common upcycled fashion techniques, and this trend – whether off the shelf or reworked – symbolises that “found and repurposed” nature, of taking something old and ordinary and elevating it into custom territory. 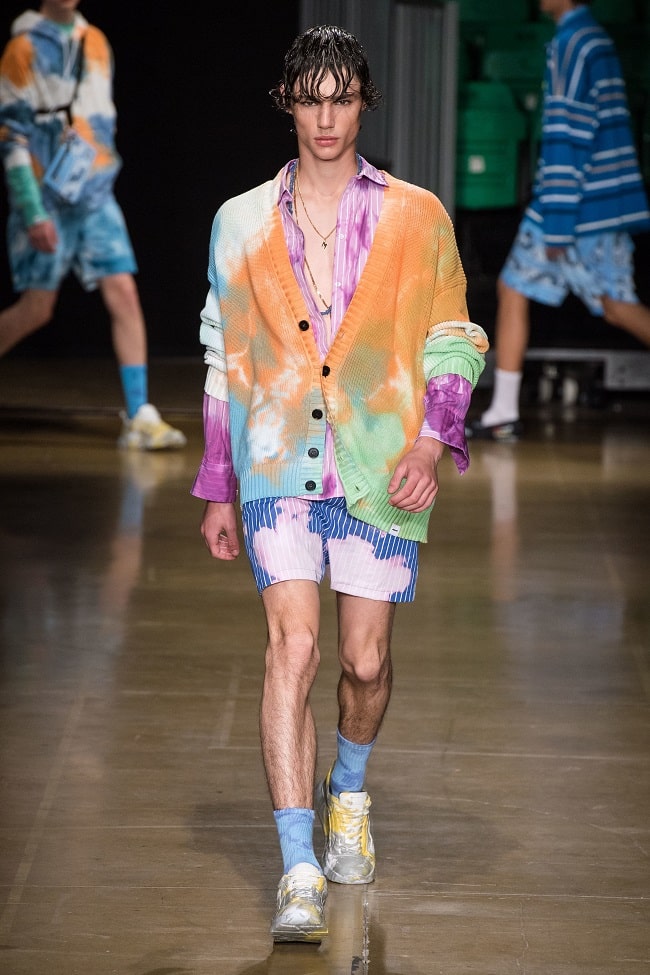 It’s just not going to die, so why not embrace it already? High Street fashion, to some extent, approaches it rather unexceptionally: Throw leopard spots or tiger stripes on top of a camp shirt or denim jacket, and that’s that. Runways, though, infuse it with all sorts of textures and juxtapositions that it’s not as practical for everyday wear, while streetwear lines seem to view these stripes or spots as mere paint-by-numbers suggestions, creating something trippy and psychedelic in response. Whatever your poison, you have choices, but as the trend has flourished for at least a couple of years now, consider shaking up the materials – leopard print satin, anyone? – or viewing it through a less literal lens. 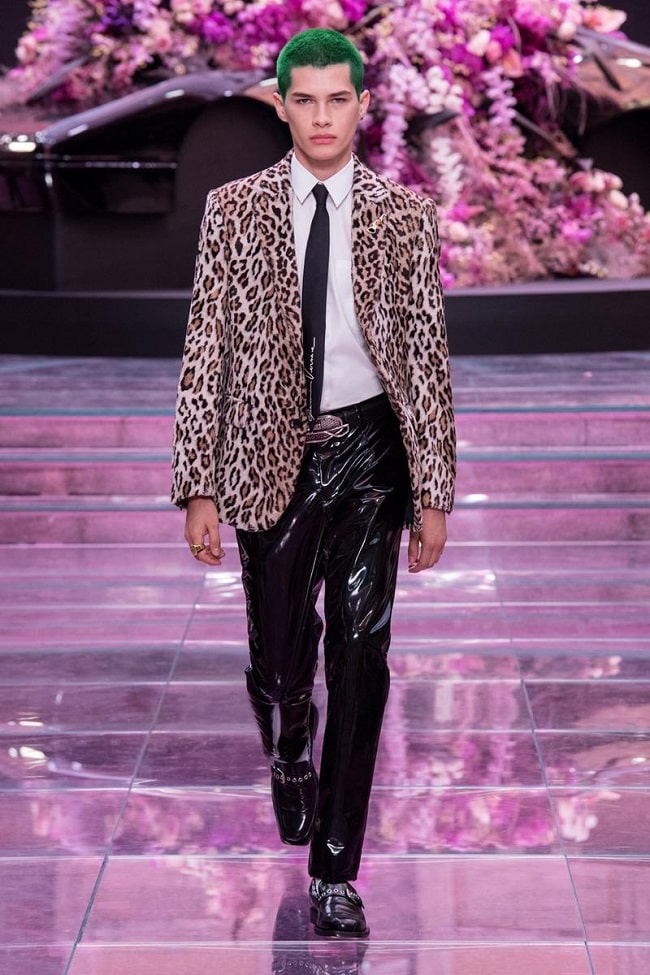 It’s not a dress. It’s not a tunic. It’s simply a shirt that extends halfway down your thighs. Yes, we’ve seen this before – looking at all those longline tees from 2018 – but for SS20, the length is less of a suggestion and more of a new unisex garment. Wear it with trousers. Wear it with leggings. However you wear it, it should have a bit of space, so it alludes to the flowing caftans of the ‘70s, but leaves the hippy-dippy vibes behind for angular versatility that layers well and never seems “borrowed” when it’s on a male figure. 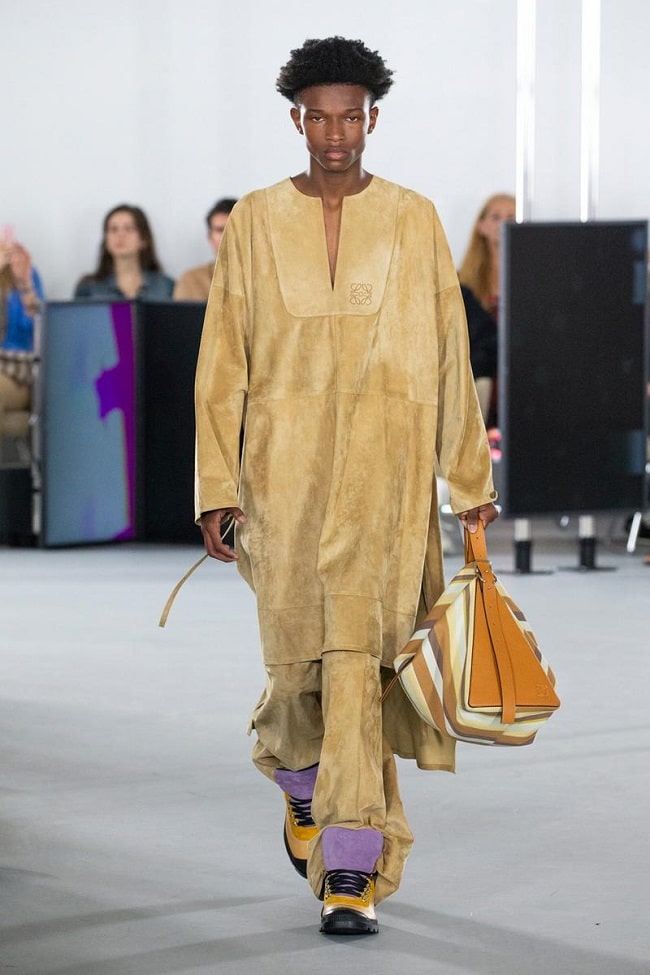 This new guy knows his roots – toward ‘90s rugby shirts and a strong love of old-school Tommy Hilfiger and Polo Ralph Lauren. He’s also not one to strictly play by the books, either. Admiring Balenciaga and Vetements from a strong distance, he doesn’t treat neon shades like an anathema, while wider-cut silhouettes are simply a signifier of comfort. Yet, he doesn’t stray far: Oxford shirts and double-breasted blazers rule – but he won’t dare wear them like his dad does – and boat shoes, preferably with stripes or some print, are always somewhere in his closet. 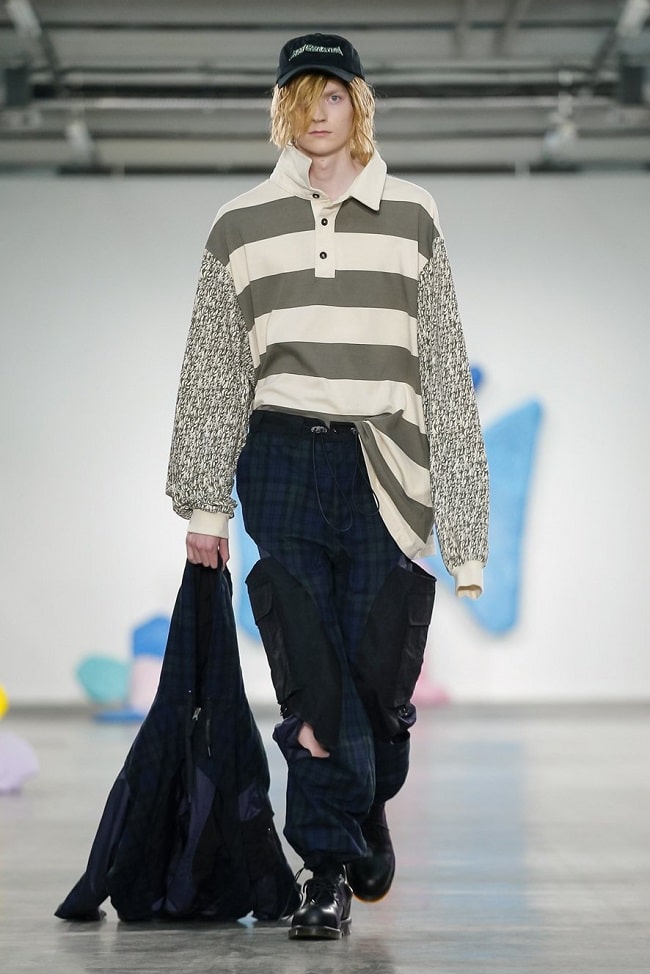 It’s no longer a big deal to head out in your pyjamas or something that looks vaguely like them – a.k.a. loungewear. Shorts that resemble boxers – and don’t dare wear your briefs outdoors – have the shorter length, the elastic waist with a drawstring, and the cheeky all-over prints, but the only thing truly missing is the actual three-pack packaging. From one angle, it will appear that you forgot to get fully dressed that morning – you simply threw on a tee and your undergarments and headed out. From another, this more accessible shorter length appears as if you’re walking around in retro swim shorts, thus making it seem as if you’re treating the rest of the world like your own private resort. 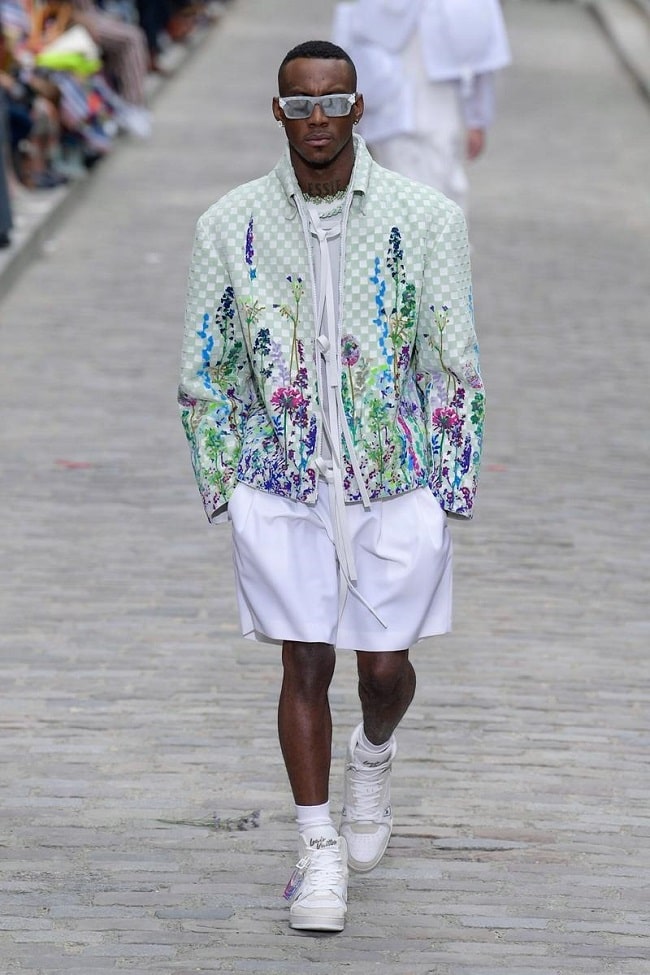 Organza. Tulle. Chiffon. Whichever material you use, it’s lace 2.0 in the menswear world. Emerging in 2019 as a novelty trend found from high-fashion down to fast-fashion retailers, sheer fabrics bring out your inner rock star – or paint you as a grown-up boybander, a la Harry Styles – and appeal to your inner vacationer who’d rather be hanging around the pool in nothing else but a barely there camp shirt and swim trunks. Versions do play up the lace allusions, but also throw in plenty of colours and prints. 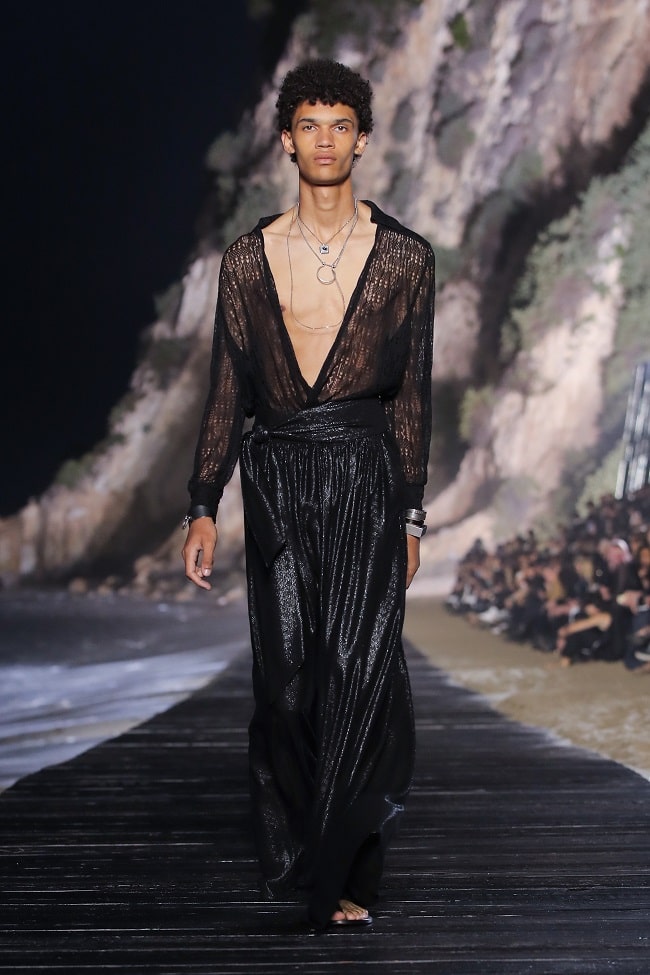 For SS20, you can’t have too many pockets, although flap and zippered pockets covering the length of your trousers, the front and sleeves of your shirt, and part of your jacket more than seem like it. The more, the better, right? In a sense, it’s the safari jacket and cargo trouser taken to extremes, while in another, its utility fashion extended to quixotically impractical lengths, as if to say, “See? You don’t really need this many pockets but you certainly can wear them.” 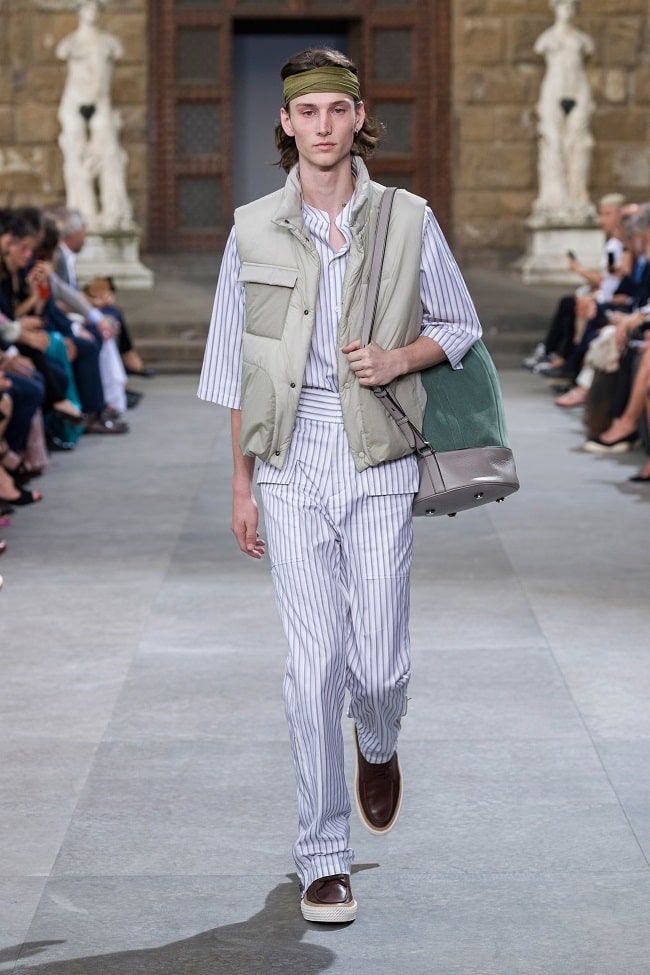