WHY CROCS ARE THE UNLIKELIEST OF STREETWEAR TRENDS 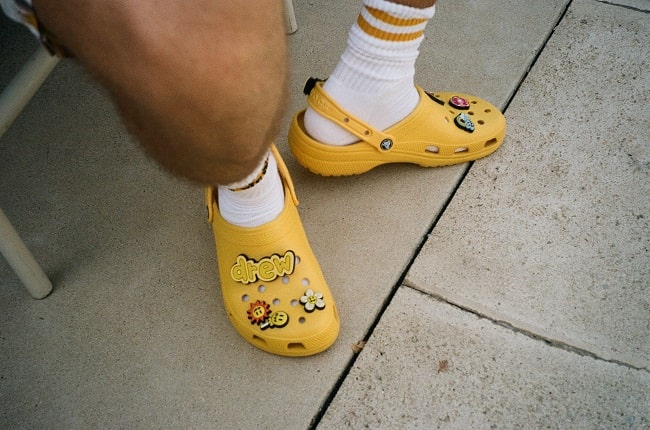 You’ve heard the jokes, and you’ve seen the memes. Crocs, after a brief period of popularity in the 2000s, developed a reputation as a basic shoe – if you can even call it that – with a utilitarian purpose for individuals who don’t care an ounce about fashion. Later, they evolved into a style almost strictly for children – easy to slip on, comfortable, and no fights about using Velcro or laces.

Yet, since the start of the pandemic, Crocs have experienced an odd, out-of-nowhere resurgence that’s reached almost Supreme-like proportions. The hypebeasts aren’t just wearing them – they’re seeking out exclusive collabs and paying marked-up prices on resale platforms after. Outside of this microcosm, the company’s profits have also seen year-over-year gains when the footwear industry, as a whole, has experienced a 20-percent decline since 2019. 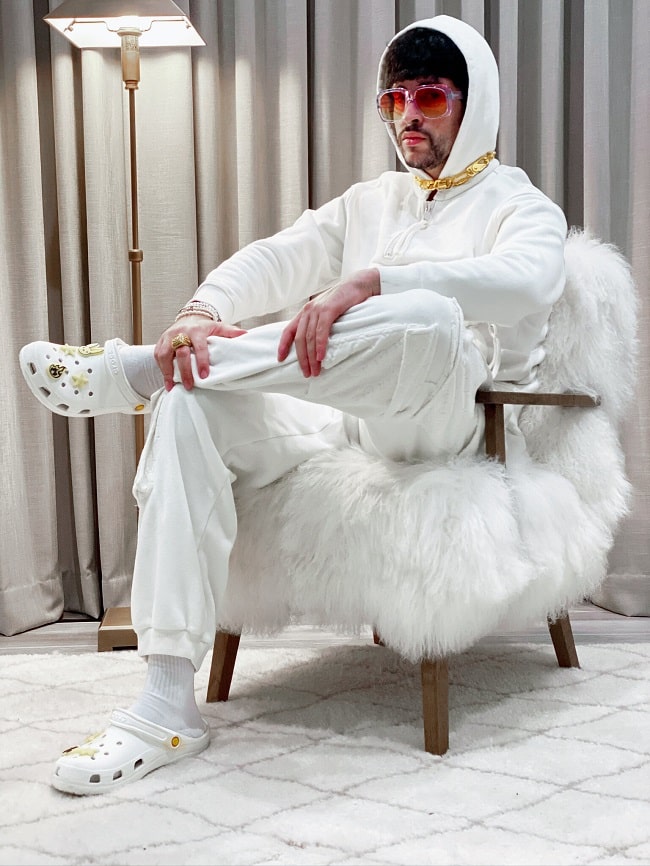 First, What are Crocs?

Imitators exist, but Crocs are specifically a lightweight, breathable, clog-like shoe designed out of the company’s proprietary foam, Croslite, a closed-cell resin that feels and reacts like EVA. The result feels lightweight and comfortable, won’t mark up your floors, and offers a degree of odour resistance. Operating out of Colorado, Crocs first introduced its shoes – which have since grown to encompass over 120 different styles – in 2002. At the time, Croslite’s performance in wet and dry conditions gave Crocs the novelty factor and influenced their name, inspired by the crocodile’s land-to-water habitat. Initially, Crocs marketed the product to outdoor crowds, particularly those interested in watersports, but they caught on in jobs where people spent hours on their feet – healthcare and food service, particularly. In short, Crocs looked like duty shoes but offered a more lightweight feel and more comfortable fit. 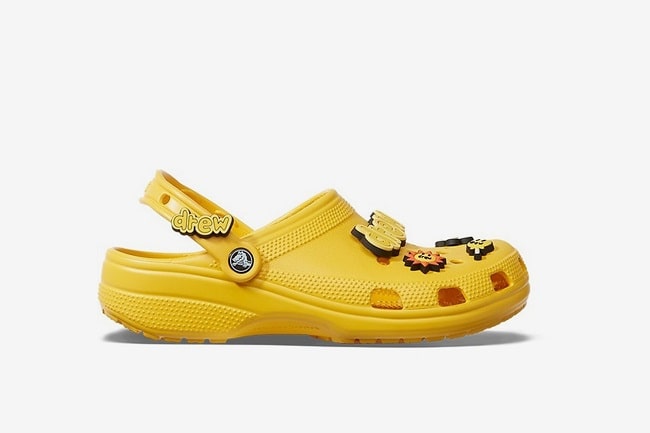 Footwear News reported that in the second quarter of 2020 alone, Crocs’ ecommerce sales increased 67.7 percent. By the third quarter, the company put out its own statement, claiming that revenue will likely grow 10 percent from Q3 in 2019. Added to this, limited-edition collaborations have – in an approach taken by many streetwear brands – given their sales a bump. For the recent Justin Bieber collaboration, a simple Instagram post prior to the release resulted in an 11% increase for company stocks. Meanwhile, searches on Lyst for Crocs increased 32 percent over the course of 2020. During a period where retail, save for athleisure, has seen a sharp year-over-year drop off, the figures paint a promising picture, particularly for a company that nearly declared bankruptcy in 2009 after losing $185 million in 2008. So, the question is why Crocs and not another style? First, Crocs have developed a so-bad-they’re-good reputation in terms of comfort that stems from the “ugly” dad trend dating back a couple of years ago that introduced the orthopaedic-like Balenciaga Triple S and Gucci Rhyton. Sported on Instagram by celebrities looking to chill, the unsightly silhouette has received some attention for its comfort factor and ease of wear now that everyone’s staying home and purportedly not wearing real shoes. 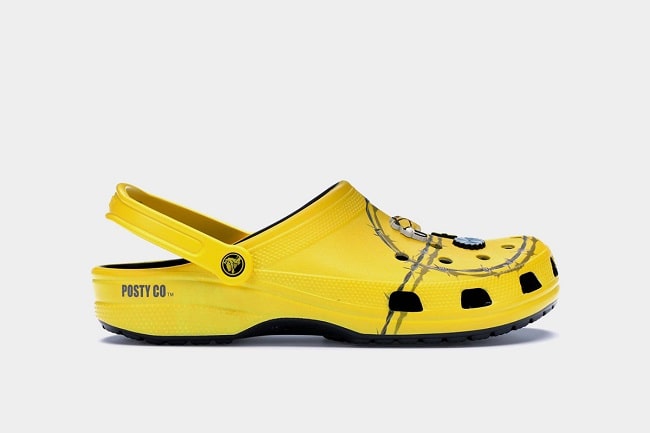 Unlike flip-flops and slippers, however, Crocs actually give you some support and provide a degree of breathability. And, especially as you’re not really going anywhere, no one actually has to see you wearing them. In short, they’re the perfect house shoe you can wear in secret that’s been bolstered by a series of exclusive brand and celebrity collaborations. Crocs didn’t sit back passively and wait for the sales to come in, however. Starting at the end of 2018 and going into 2019, the company harnessed their status through a series of collaborations – Balenciaga on the runway and with singer/rapper Post Malone for three capsule collections. Then, into 2020, the company ramped up its Come As You Are campaign, initially introduced in 2016 to promote the comfort and style expression qualities of their signature shoes. As a second factor – and one that’s drawn positive attention to brands during the pandemic – Crocs started its “A Free Pair for Healthcare” campaign during the second quarter of the year. The company, in turn, donated over 850,000 pairs of shoes to essential workers and subsequently saw website traffic increase by 29 million new visits. 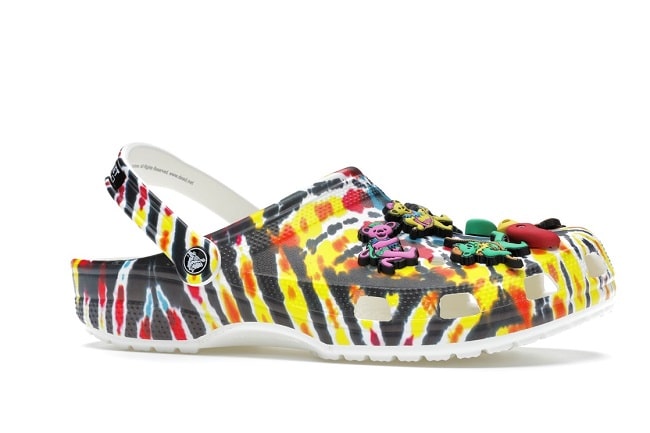 Capsule or limited-edition collections have turned into the bread-and-butter for many streetwear brands, offering a surge of demand for a brief period. This approach has further bled into and influenced seasonless fashion – or collections, free of seasons and their implications, released whenever the designer is ready. While Crocs still has its signature shoes available through their site and a spectrum of retailers, 2020 has seen the company expand its limited-edition offerings. Croctober represented the apex, another promotional effort that resulted the release of the Croc Day 2020 clogs on 23 October. This effort featured an intentionally mismatched backless design in a blue, neon orange, yellow, white, and purple colourway, with extra holes to add up to 50 Jibbitz charms. Prior to Croctober, Crocs’ limited-edition collections started picking up speed in 2018, with Post Malone’s first collection, inspired by his time working at a chicken restaurant. The Post Malone x Crocs Dimitri Clog featured a devil motif over the body and six custom Jibbitz charms inspired by his tattoos and Posty Co. brand. He followed this with a solid yellow clog with a barbed wire pattern. 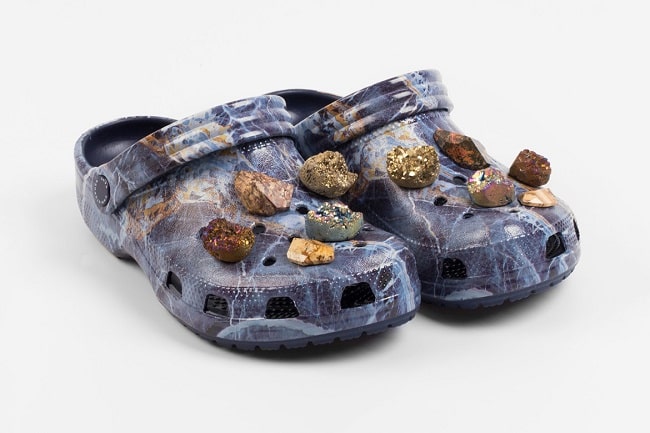 Post Malone unveiled his third effort close to a year later – and, almost coincidentally, a few months before the Covid-19 pandemic hit the western world. This limited-edition collection utilised the Duet Max Clog, a sturdier design with thicker treads, and added a blue and black camouflage pattern to the exterior. What could’ve been a novelty move involving a performer who’s been all over the map in terms of style and endorsements – from Postmates to western suits to wine – served as the catalyst for more partnerships. As more and more Americans stayed home, Crocs developed unique, limited-edition collections with illustrator Takashi Murakami, the Grateful Dead, and former Batwoman actress Ruby Rose for Pride month. Along the way, Bad Bunny’s glow-in-the-dark Crocs, part of an effort to promote album YHLQMDLG, emerged in February and sold out in minutes. Justin Bieber’s Crocs collaboration saw a similar pattern, selling out in just under an hour. Now a hot commodity, the Crocs X Justin Bieber with drew – in reference to the singer’s own fashion brand, Drew House – built off sightings of Bieber in Crocs and paired a yellow clog with eight Jibbitz. 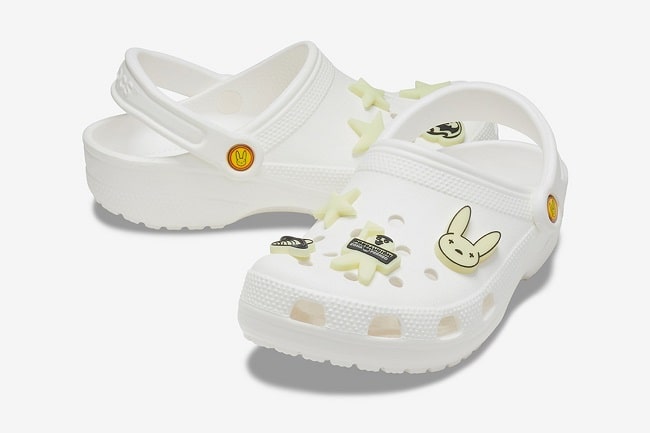 Just as you’ll see Supreme partnering with Comme des Garcons or Vans, Crocs appears to see the value of working with high-fashion brands, in spite of their product being positioned as ugly, ironic fashion. These partnerships date back to 2016, when the brand worked with Christopher Kane to develop a marble-patterned clog featuring large crystal Jibbitz. The shoe debuted in one of Kane’s 2017 runway shows. More prominently – both in the literal and figurative senses – was the platform clog Balenciaga unveiled in 2018 – right at the height of its dad fashion era, filled with stonewashed jeans, pleats, and shapeless, oversized silhouettes. Also introduced on the runway, these eventually sold for $850 USD, and combined a ‘70s-esque platform in a solid pink or tan silhouette with various jewel- and pin-shaped Jibbitz. 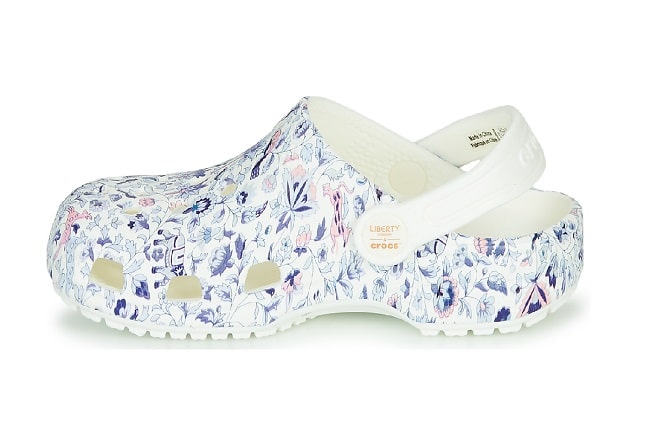 More subdued and angled toward everyday wear, Crocs continued to dabble with patterns by partnering with Liberty London early in 2020. Yet, Crocs’ partnerships aren’t limited to other fashion brands. Taking another cue from out-there streetwear collabs, the company worked with KFC – yes, the fried chicken chain – to introduce a shoe featuring a photographic fried chicken pattern – complemented by a red and white striped edge. The shoes were accompanied by Jibbitz allegedly intended to smell like fried chicken. Stemming off this surge, demand for Crocs has soared on the streetwear resale market. On StockX specifically, prices have jumped 80 percent since January, with the average pair selling for three times what you’ll pay in stores. Searches, meanwhile, have surpassed other shoe styles eightfold. Will the demand last? It’s hard to say, but as long as we’re all staying home and traveling minimally, Crocs are finding a second life.