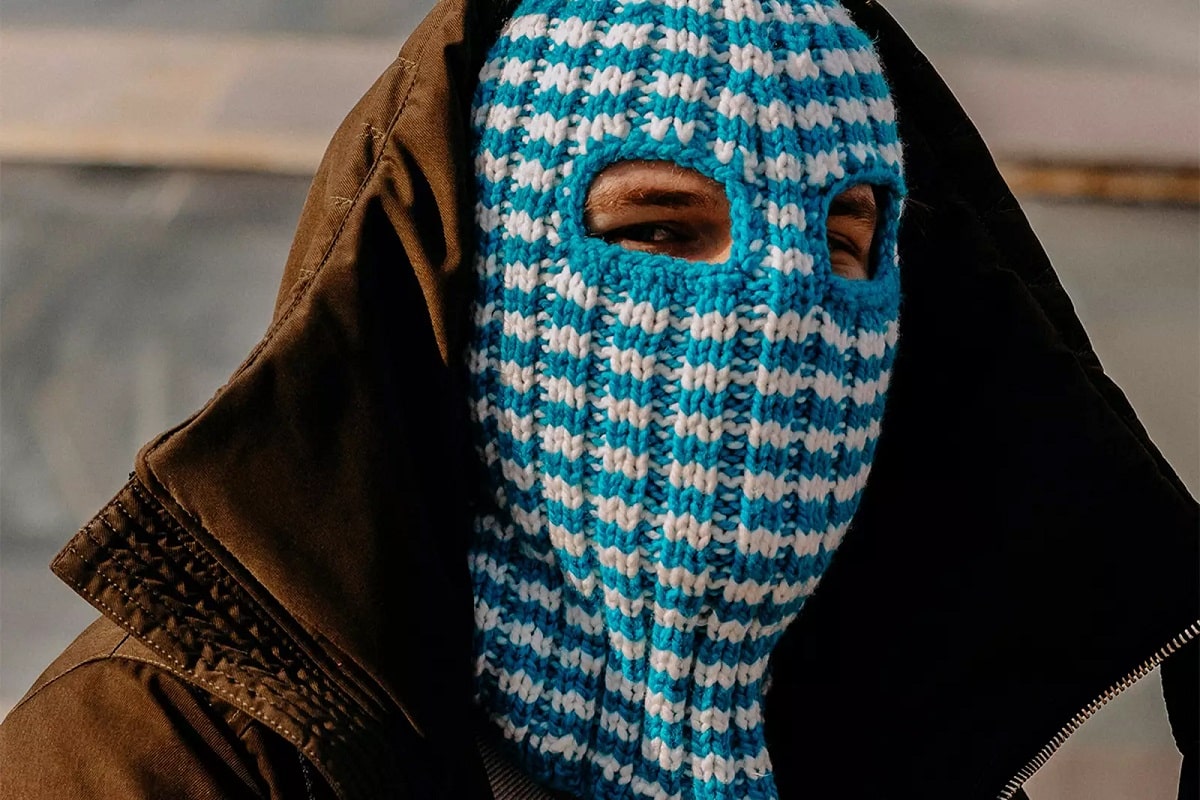 We’ve seen our fair share of odd menswear trends over the past decade. That novelty factor is expected as an industry grows and diversifies. Yet, predictability runs through even the most seemingly innovative concepts. At the confluence of these two factors sits balaclavas – expected based on origins and our current climate and a maximalist, if not a tad extra, canvas that’s headed down the same path as an Arc’Teryx jacket. Behind the current swell, Fashion Week presentations from Loewe, Y/Project, Rick Owens, and Raf Simons take creative liberties with what’s essentially a dressed-up ski mask. Some keep it traditional, while other interpretations up the luxury factor – from mohair to zippers to colourful knits.

Then, there’s the celebrity angle, which, particularly when it comes to streetwear and everyday adoption, seems to cast a broader net over public appeal than an androgynous-leaning fashion presentation. While, fashion wise, we’ve been spotting balaclavas in collections regularly since 2017, the past few years have seen rapper Gunna, Kanye West, Justin Bieber, and A$AP Rocky sport the garment. Giving it wider, more unisex appeal was Kim Kardashian at the 2021 Met Gala: Style purists and backpackers will proclaim her fully black face-mask body suit designed by Balenciaga and her ex-husband isn’t a true balaclava – in fact, you might say it looks more appropriate for fencing – but the concept of partially covering one’s face for nondescript anonymity remains at the ensemble’s core. As you spot more balaclavas in spring and off the trails, understand the roots of their current popularity. 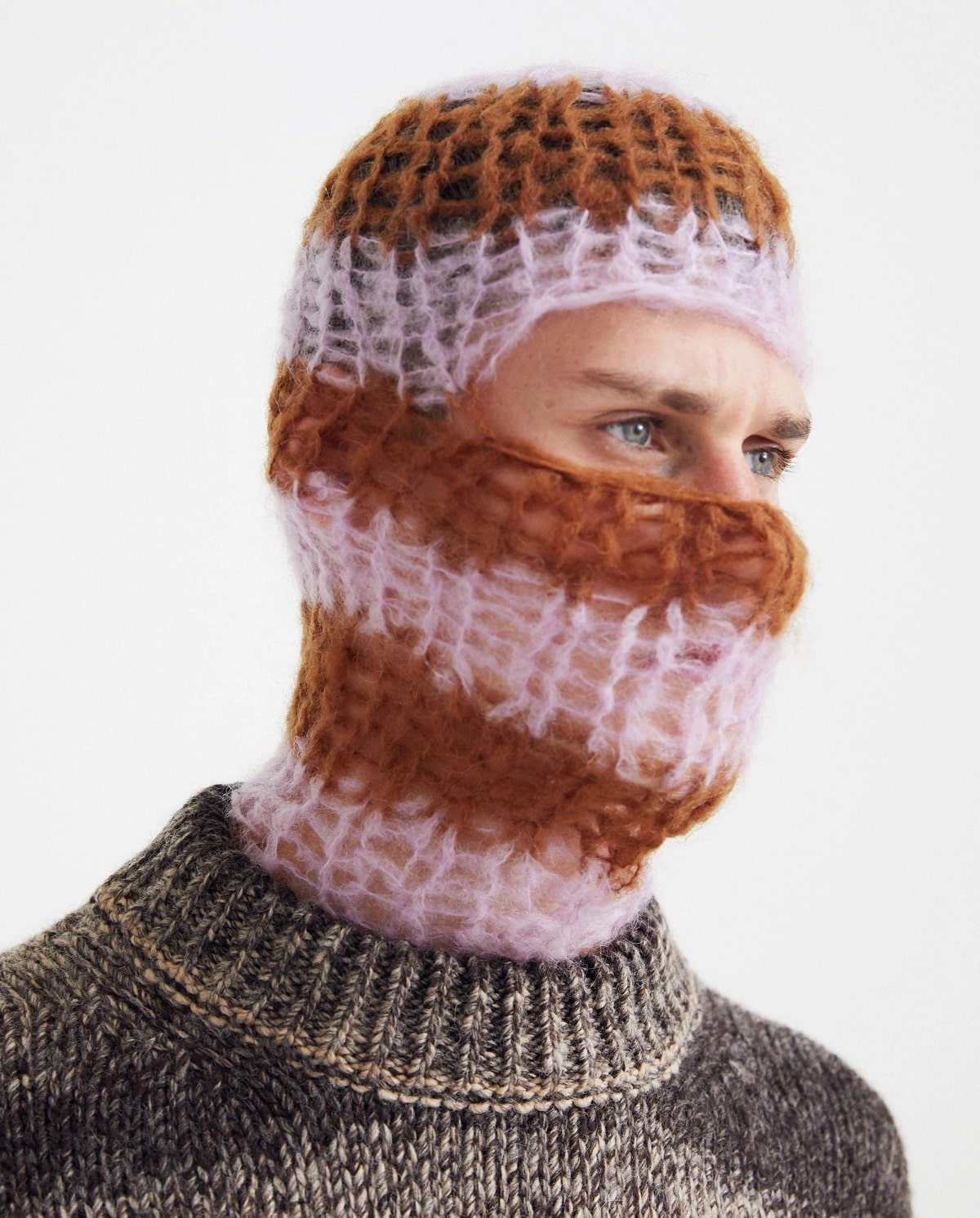 “Balaclava,” at least as a word to describe a garment, dates back to the Crimean War in 1853, particularly the battle of Balaclava. At the time, the British were tasked with assisting Ukrainians in fighting the Russians and had to adapt to the region’s colder climate. Over the next nearly 170 years, the garment, predictably, followed the military-to-civilian route as a practical face covering for keeping out the cold. Today, balaclavas extend the coverage provided by a buff, making them popular with winter outdoor enthusiasts looking to hike, backpack, or snowshoe, skiers, and motorcycle riders wanting a streamlined face covering that fits underneath a bulky helmet. Considering these functions, construction runs from sweater knit to more refined with moisture-wicking properties. At the same time, the face-covering design – one often leaving just the eyes visible – has become a symbol of warfare and rebellion. This theme and symbol follow the balaclava’s trajectory with the mainstream-cracking drill scene and streetwear brand Corteiz capitalizing off the wide-legged, hoodie-sporting, and balaclava-wearing vibe. 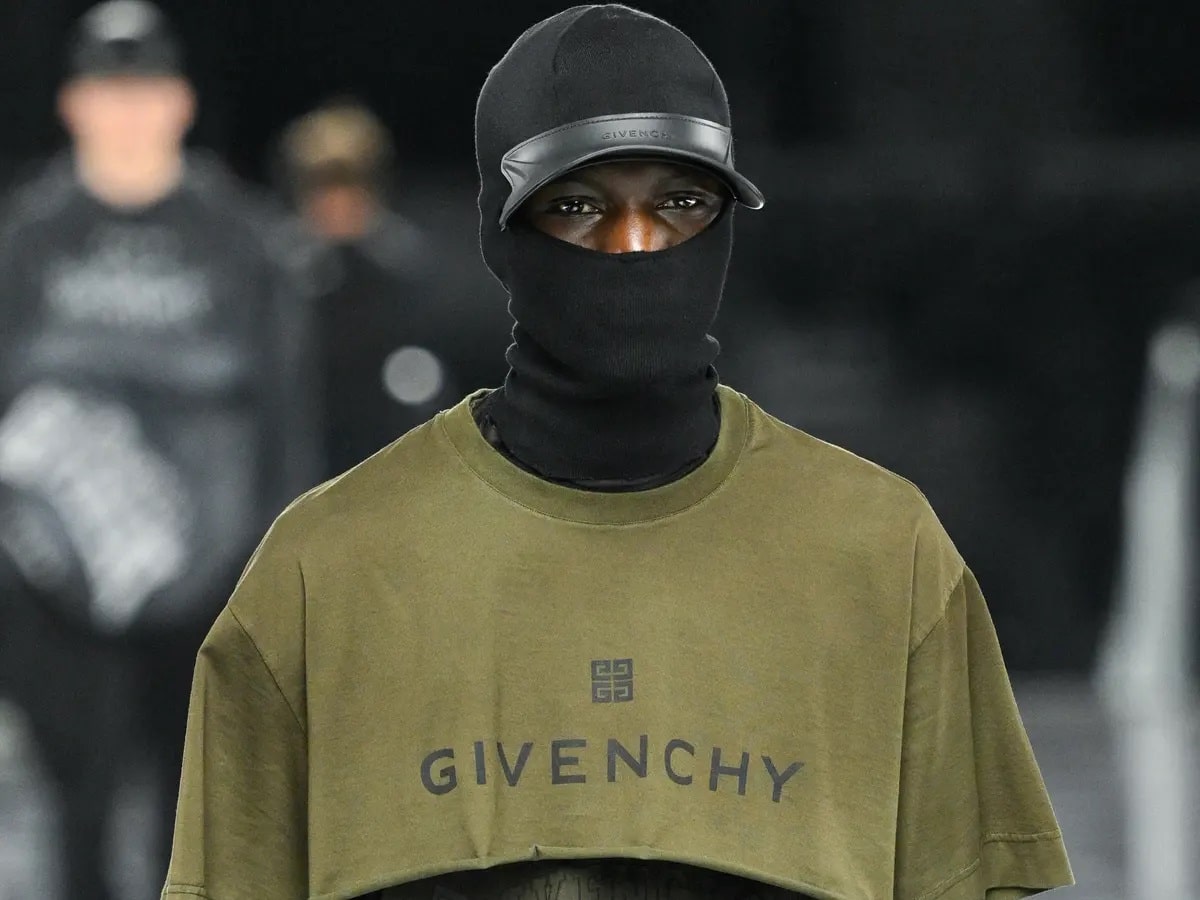 The Popularity of Balaclavas

Balaclavas ride on the tails of two overarching streetwear trends: Gorpcore, or adapting traditional outdoor gear for fashion and city wear, and post-Soviet style, which reached the global stage back in 2017 with collections from Gosha Rubchinskiy and Vetements embodying a ‘90s Eastern bloc aesthetic inspired by hard-to-find sportswear. Outside of this dichotomy, many of us are adjusting to a world where a face covering of some kind is to be expected. We’ve lived through creative fabric facemasks and utilitarian surgical and N95 options over the past two years, and the balaclava essentially goes a step further. Despite the garment’s modern popularity going back close to five years now, consumer demand and curiosity shot up in early 2022. Lyst reports a 344-percent year-over-year increase in searches and requests, while Depop noticed a 145-percent month-over-month jump toward the beginning of the year. StockX, meanwhile, found requests go up five-fold for the first few months of 2021 compared to the same period last year. Behind this demand:

Whereas Instagram functions as flashy curation and an aspirational aesthetic built on filters, TikTok traffics supposed authenticity that has drawn a primarily Gen Z audience. Its effects on fashion – men’s and women’s – and culture continue to grow. With the similar hype that brought us whipped coffee early in the Covid-19 pandemic, “balaclava” as a trending topic surged in 2022. 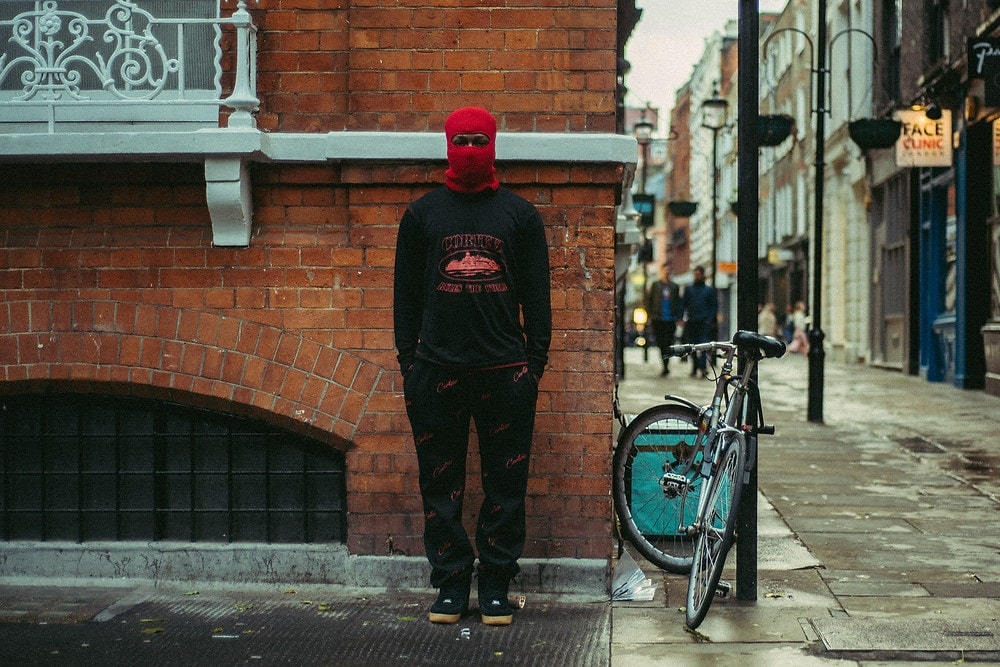 Overlapping with TikTok-spurred popularity is what could be described as post-Soviet 2.0 – a more personal look at Eastern European street style that builds off yet goes beyond what we saw back in 2017. Around that era, Demna Gvasalia’s Vetements introduced a new interpretation – a baseball cap fused with a babushka scarf – that paved the way for the present’s sense of adventurousness. In between, Raf Simons dabbled with them during his brief yet fascinating Americana-inflected time for Calvin Klein, Gucci got on board with un-PC facemasks, and Miu Miu tried out the template with pastels. Migrating back to streetwear, Givenchy’s reflective yet prototypical design went the way of fetish masks, Louis Vuitton under the late Virgil Abloh’s direction added checks, and a few outdoor collaborations – notably Supreme x SOUTH2 WEST8 and North Face x KAWS – experimented with various prints. Bleeding that boundary are additional branded print-based offerings from Stone Island and Marine Serre.

We’ve pointed out the sometimes-distant military origins of various menswear garments, from unassuming chinos and trench coats to the more recent casual adoption of tactical boots. Balaclavas fall in their footsteps: Original balaclavas were constructed out of wool, made their way to army surplus stores, and the template has served modern adventurers well. Today, casual balaclavas build from this history and counterculture adoption while running with the concept set forth with facemasks two years ago. 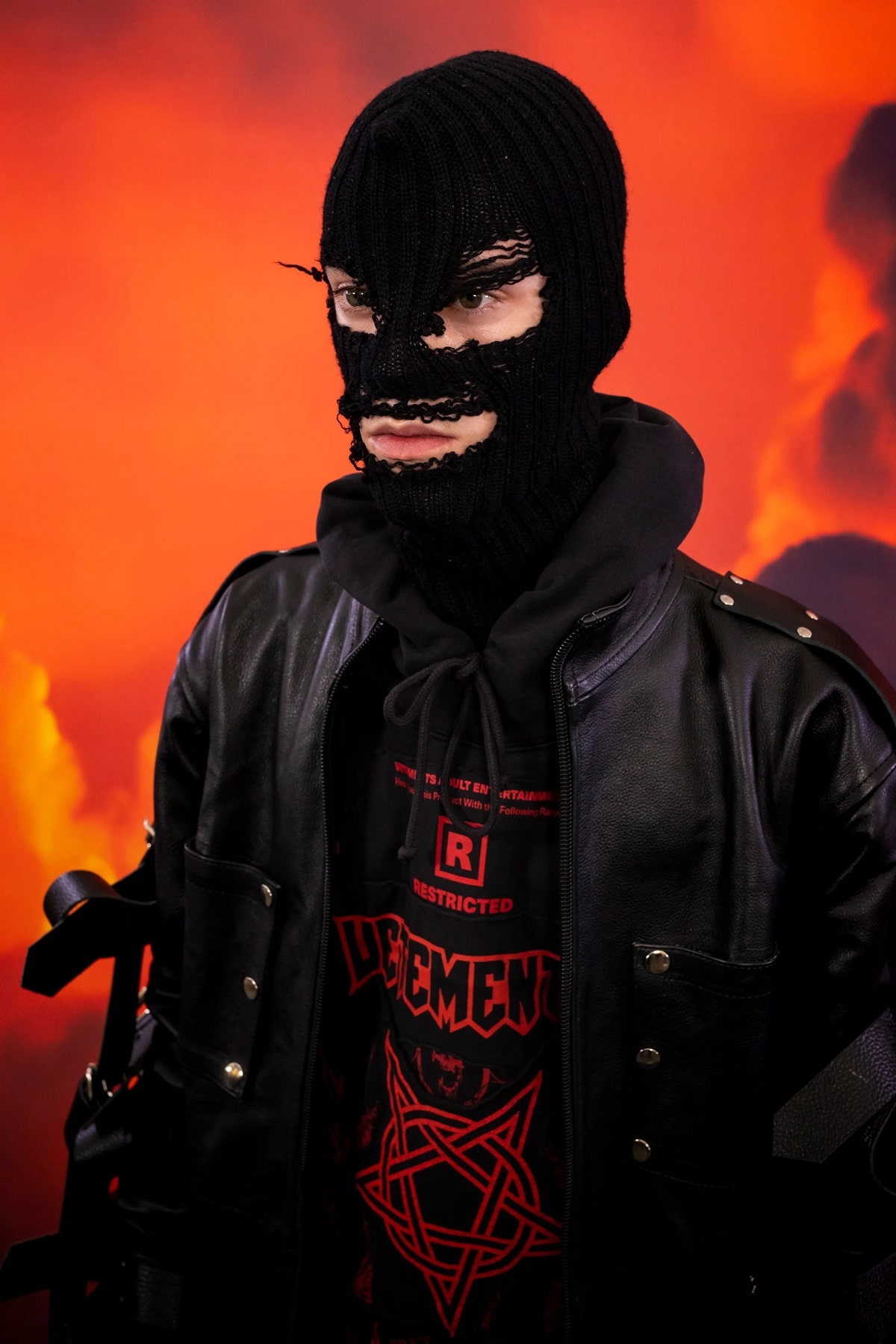 Facemask mandates ebb and flow based on materials and recent research. In the US, polyester-based buffs were considered unsafe early on, only for recommendations to reverse months later. In between, shortages resulted in apparel brands creating their own: What was modestly practical early on soon became a template for various fabrics and prints. Toward the end of 2021, with the omicron variant picking up, recommendations urged double masking – a surgical mask paired with a cloth mask – if you couldn’t find an N95. Predictably, rules and recommendations vary with where in the world you happen to be. In turn, if mask mandates don’t appear to be disappearing any time soon, balaclavas let you meet these requirements somewhat fashionably and still give you the option to layer the garment with something – be it another cloth or even a surgical mask.

Prior to the current surge, balaclavas carved out an area within outdoor gear. No, they aren’t intended to be a style statement, but their streamlined, almost full-coverage form adds a lightweight, warmth-retaining layer underneath hats and jackets that exceeds what you’ll get from a scarf and even a buff. As we’ve seen with gorpcore, something practical and functional doesn’t need to always be visually dull, and the present is the balaclava’s chance to shine through this lens.