WHY THE TACTICAL BOOT IS SUDDENLY POPULAR 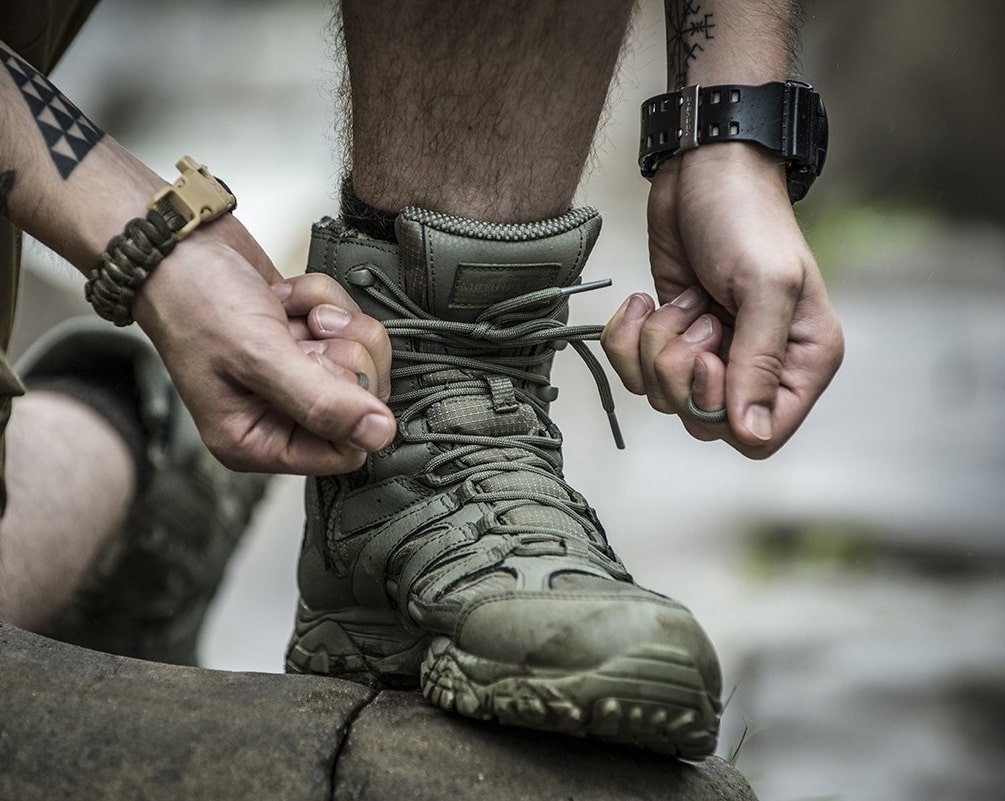 Considering the recent release of No Time to Die, pop culture and menswear collections are temporarily peak James Bond: The best movies, the best styles, the best and worst villains, and, as always comes up around these flicks’ releases, who’s been the best Bond over the decades.

Merchandise, of course, ties into the release. Beyond what’s predictable, Danner – the work and tactical boot brand – unveiled a special-edition Tanicus boot inspired by the super-spy on September 16. This version cuts its own path with an all-black colourway, essentially making it a must-wear for a modern Bond. You can’t really climb things or successfully escape villains in dress shoes, no matter how sharp they look, but that’s part of the slick action-hero fantasy. Beyond appearances, the Tanicus boot retains its key technical features: a combination of ballistic nylon and suede for durability and breathability, a responsive, impact-absorbing midsole, and a grippy Vibram outsole. 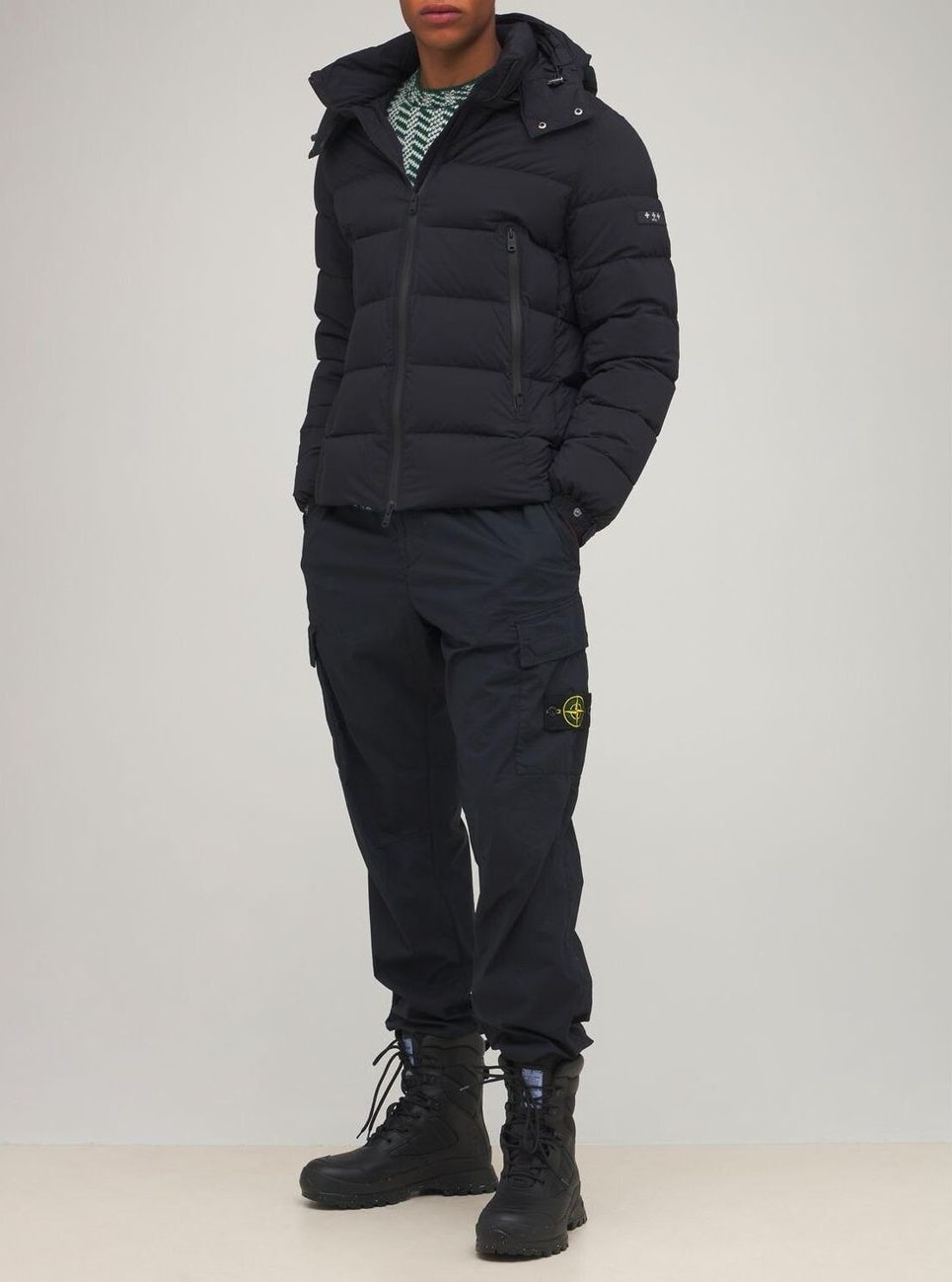 Danner’s not the only one reworking a tactical boot for the average, if not style-minded, consumer. James Bond movies aside, Oakley – spurred for the time being by Y2K-fueled nostalgia for wraparound sunglasses – threw its hat into the ring again for footwear, this time launching a tactical-inspired sneaker boot. The Coyote boot as it’s called plays suede off Cordura nylon for a predictable combination, and finishes it with a grippy outsole and weather-blocking elements.

So, why tactical boots and why now?

A Fresh Take on the Combat Boot

Modern menswear rests on a reliable military-influenced foundation. A good deal of what’s in your wardrobe now – trench coats, chinos, field jackets, bombers, and balmoral boots – all have such origins, no matter how tenuous they feel in the present. Combat boots, in more recent decades, fell into a similar pattern, with Dr. Martens delivering more accessibility for everyday wear, albeit through more alternative-leaning pathways. These days, a combat boot silhouette doesn’t look that different from a pair of dress boots.

Yet, what we perceive as a combat boot – tall, laced metal eyelets, and fully leather, with a grippy outsole underneath – reflects early- to mid-20th century military garments. The tactical boot, by contrast, is a modern interpretation that, perhaps through hunting, streetwear, or warcore, is gradually seeing more off-duty use. 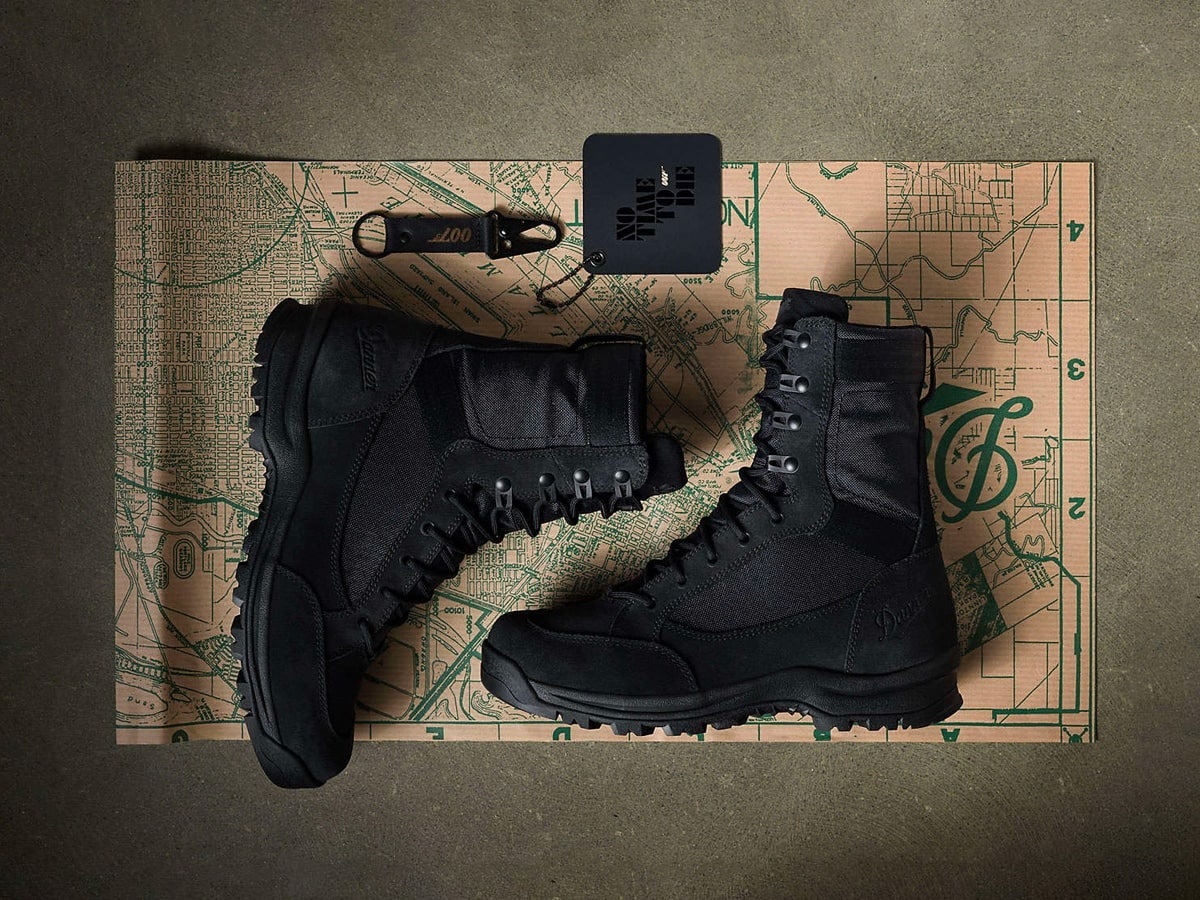 Compared to the combat boot’s commonplaceness and versatility, the tactical boot maintains a specific silhouette. Overlap, although minimal, exists through their purpose and function, with the latter being more of a hiking-combat hybrid. Aesthetically, a tactical boot combines a mix of textile – usually ballistic or Cordura nylon patches – with suede or leather reinforcements. The grippy, slip-resistant, lugged outsole is still there, as is the lace-up front, although this may be supplemented by a full-zip side closure for easy on and off. Like trainers or a hiking boot, the design incorporates impact absorption, acknowledges that breathability fights fatigue, and usually provides a degree of water resistance. Also like hiking and work boots, insulated options consider cold-weather wear.

Furthermore, the silhouette, by definition, isn’t a military-only style. Rather, this combination is worn by law enforcement, security, public safety, and first responder professionals. In the military, they’re strictly for non-combat wear. What they offer that traditional combat boots don’t is a greater degree of flexibility and comfort while still giving you stability, grip, and protection from the elements. 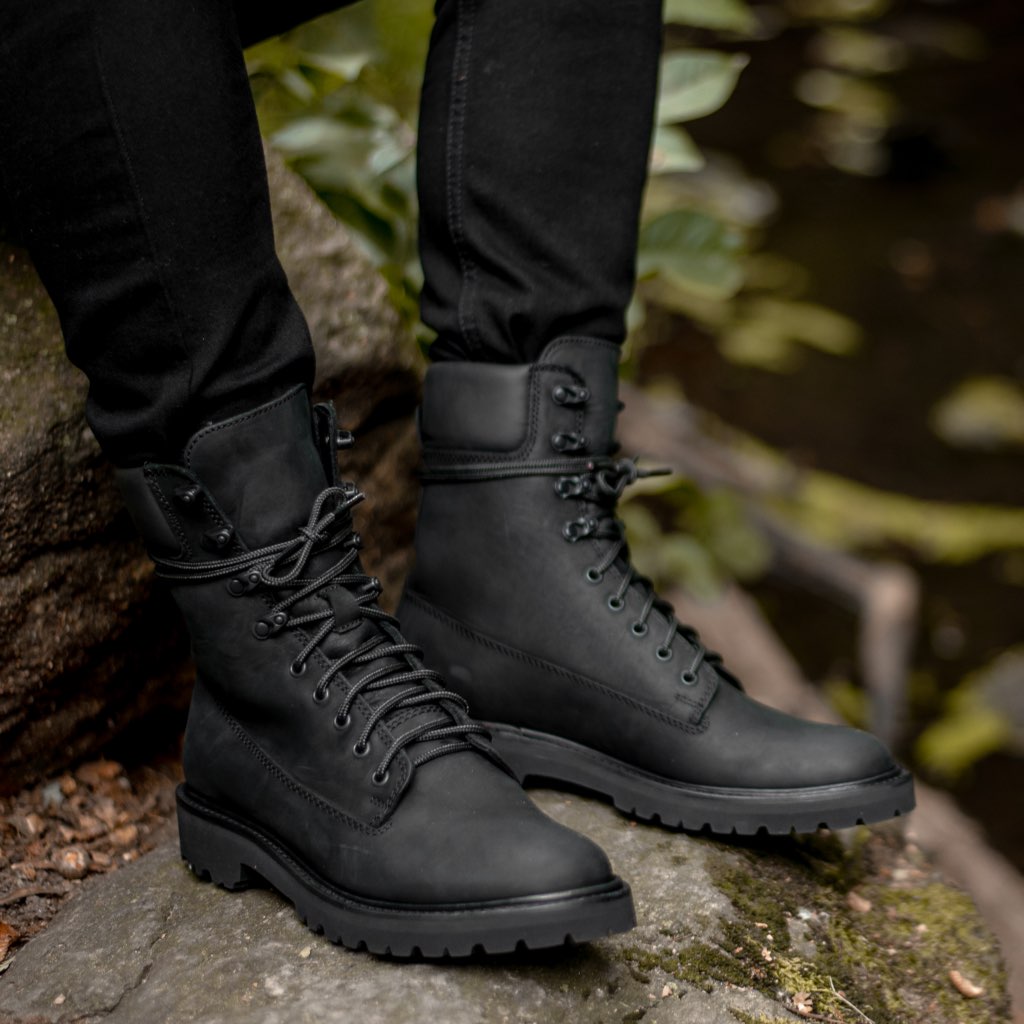 Why We’re Spotting More of the Tactical Boot

The fashion version emerges from two sources. Tactical boots fit in with the whole minimalist-tech aesthetic of smooth lines and desert shades Kanye West has cultivated with his clothing lines and footwear. More traditionally, lugged, heavy-soled boots are making their way onto the runways, almost like we’re reliving the Grunge-influenced fashion edits of the early to mid-‘90s. You could say flannel’s next, but plaid’s been a regular presence for the past few years.

Behind this interest is:

Don’t confuse “warcore” with traditional menswear garments inspired by military fashion. Rather, warcore stands upon inspiration and exaggerates it, resulting in pocket- and strap-heavy garments. This approach has revived cargo trousers, given us belts and shirts with voluminous pockets, influenced the omnipresence of olive and desert tan, and, more recently, has drawn attention to the tactical boot’s silhouette. 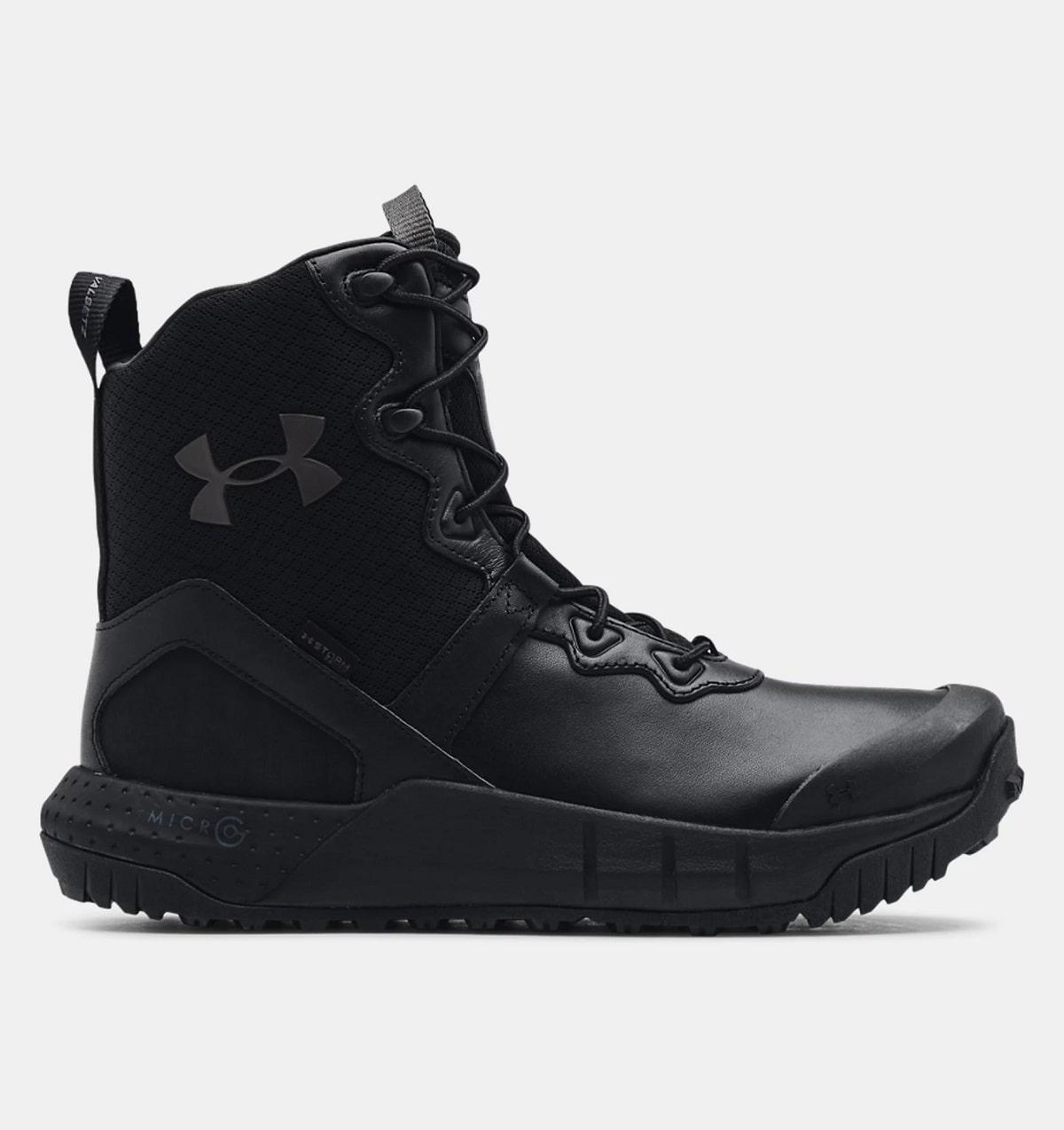 An Upgrade to Combat Boots

Everyone with even an inkling of style seems to own a pair of leather lace-up boots these days. They’re relatively easy to wear. With jeans, chinos, and even cargos? They’re all fair game. Those wanting a challenge take it up a level. Tactical boots give off trainer vibes while adding height, zippers, and straps. Lighter tan hues visually draw the eye more than black or a deeper brown. Thus, you have to think about their balance in relation to denim and whatever else you’re wearing without it seeming like you’re doing some kind of military reenactment.

Combat boots, unless you buy them directly from a tactical or military surplus store, tend to lean more in the dress direction these days. They’re not particularly breathable, the soles aren’t as grippy as you need them to be, and they’re more of a tall dress boot. Should you be someone primarily staying in urban or suburban environments, this arrangement works. Yet, if you’re the type to head off the beaten path, whether into desert, wooded, or mountain terrain, these take you there with more heft than hiking boots and less weight than a pair of work boots. 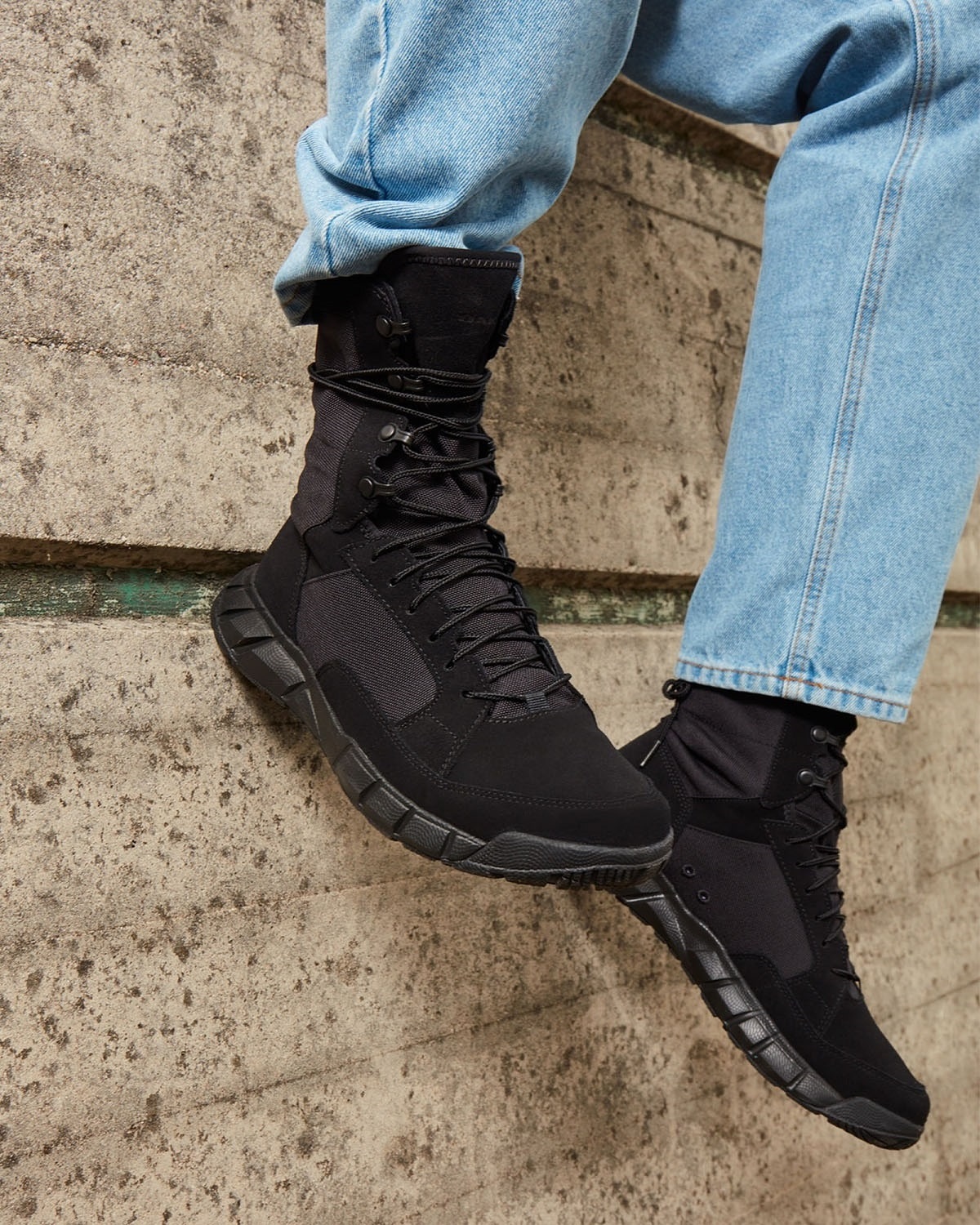