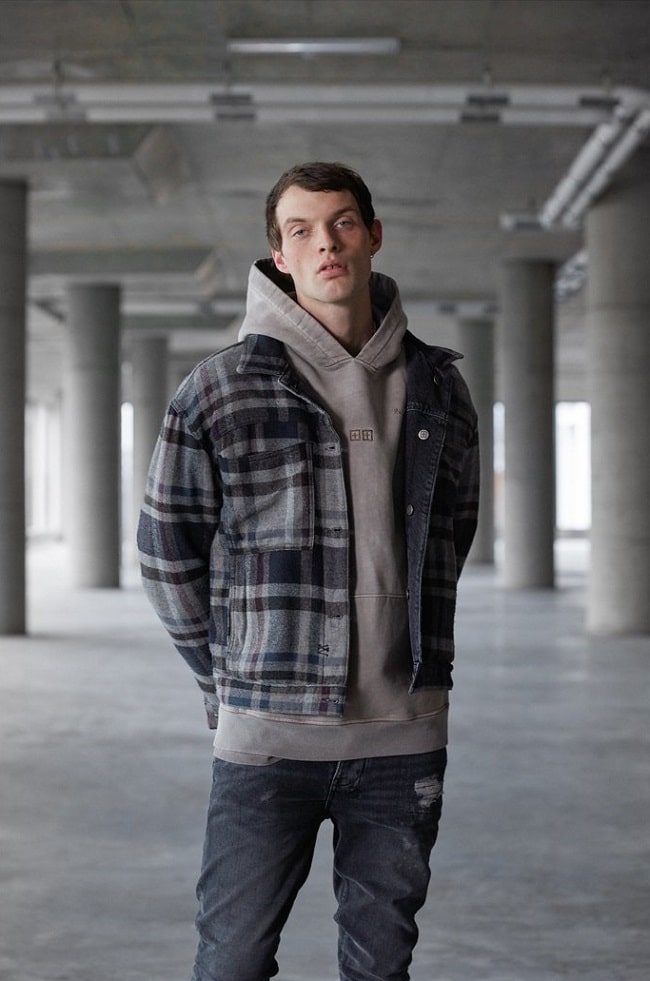 Grunge truly never left us – nor was it particularly original for its time. Yes, the stripped down, often sonically and emotionally raw music, accompanied by haphazard thrift shop threads, felt novel over 30 years ago for its reactionary attitude – directed both toward the inflated, self-important, and often posturing 1980s’ definition of success and toward the slickly produced hair metal dominating the rock charts toward the decade’s end.

At the time, the aesthetic – passive anti-fashion, in contrast to streetwear’s almost direct and defiant opposition – was easy enough to achieve – ripped jeans, a T-shirt, with flannel on top and Docs below, with many items bought secondhand or from military surplus. However, this combination didn’t suddenly manifest in the early ‘90s without warning. If you’re going off pop culture alone, the 1986 film River’s Edge starring Keanu Reeves, Crispin Glover, and Ione Skye could fall within the scope of Grunge, partially due to its un-stylized style and, more pointedly, by picturing teenage alienation and apathy at this particular point in the 20th century. Yet, film wise, we tend to associate Singles and Reality Bites – both relatively uplifting in comparison – as emblematic of the Grunge era. 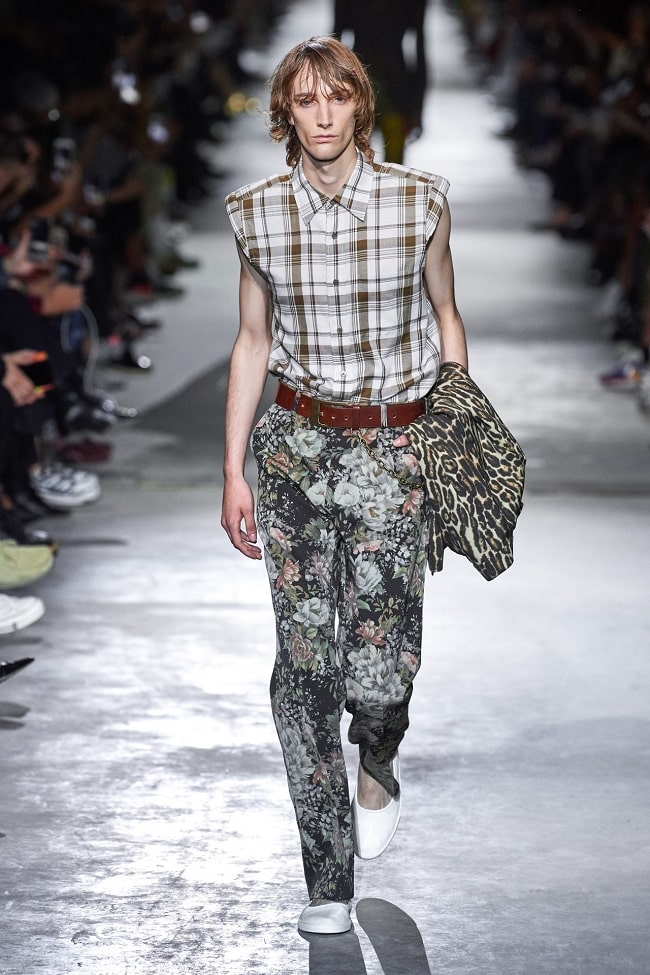 While the apex of Grunge music – the Seattle sound, but also looping in contemporaries like Chicago’s Smashing Pumpkins – gave way to the broader ‘90s alternative and – as no one wants to readily admit – the oft-sexist aggression and crudeness of nu-metal by the early ‘00s, the fashion choices particularly for men never totally met their twilight. Rather, they were readily assimilated – or, more properly, vaulted beyond a regional subculture – into casual, everyday digs. Who, these days, considers it a throwback to wear an overshirt over a crewneck tee, to put on flannel as a layer, or to wear worn-out jeans over a pair of black leather lace-up boots? Although you could say Courtney Love’s kinderwhore image eventually mutated into the sexy baby voice of Paris Hilton over a decade’s time, men’s fashion quietly embraced Grunge and never let go. That’s not to say we haven’t been notified of various revivals over the past decade. Somewhere around 2014, fashion across men’s and women’s collections fell back in love with the ‘90s, and brands have been attempting to make Grunge happen. This modern, more stylized amalgamation has already seen its ebb and flow over the past 10 years, with a second revival already beginning to emerge. Here’s how you can get it right this time around. 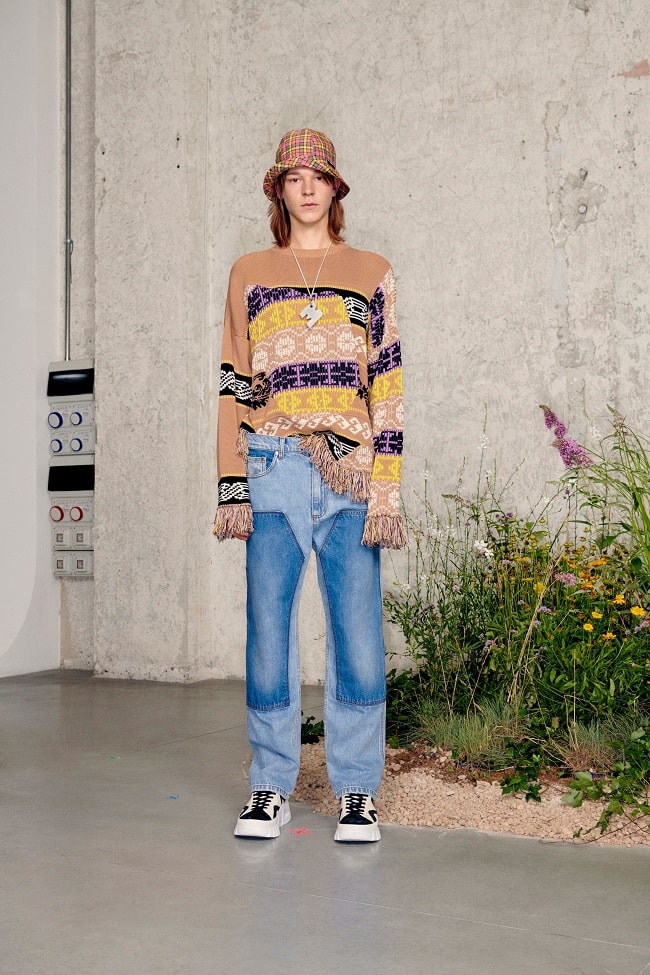 Understanding What Grunge Is (And Isn’t)

Grunge as a cultural term doesn’t have a truly defined origin. It’s said, however, that Mark Arm – who’d later go onto front Mudhoney – referred to his style of music with such a phrase as early as 1981, then performing as Mr. Epp & the Calculations. Sub Pop founder Jonathan Poneman began tossing around the same term before the end of the decade. Soon, it described the sounds coming out of Seattle, characterised by unprocessed guitars given a heavy dose of fuzz pedal seeming to emerge from punk and heavy metal without a clear origin or sense of tribute. Unlike with alternative of the 2000s, you couldn’t tell who Grunge rockers like Nirvana and Pearl Jam were referencing – only that they sounded plaintive yet angry, with lyrics about being an outcast. The era’s rockers – Kurt Cobain, most notably in hindsight, but also anyone coming out of Seattle – didn’t cultivate a deliberate look. Instead, stage appearances resembled a grab bag, as if they ran through a thrift shop selecting items at random. Fit didn’t matter – hence the oversized silhouette, often with wide-cut pieces laid on top of each other – nor did gender – both Cobain, as well as the Smashing Pumpkins’ Billy Corgan both performed on stage in dresses during this point in the ‘90s. Many of the garments didn’t appear cleaned, either, instead as if they’d been worn a few times already and picked up from the floor before a gig. 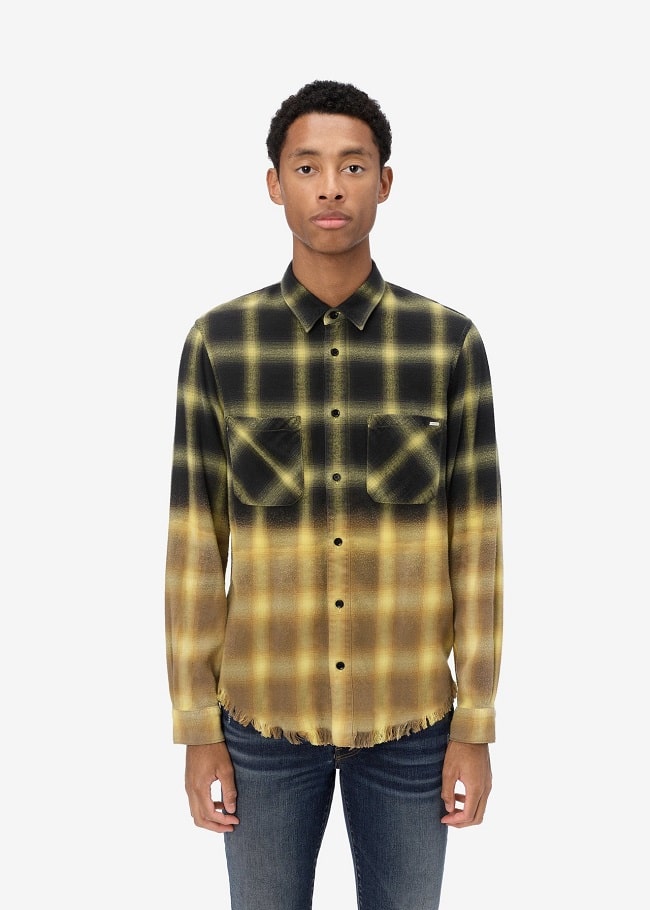 While the music suggested a fed-up-with-it-all attitude without becoming overtly political and the clothing choices frugality, Grunge itself felt culturally reactionary – the fringe and the underground creeping up to dominate the mainstream for a good four to five years. It flew in the face of hair metal’s carefully crafted, spandex-heavy look and misogynistic lyrics and briefly ushered in a period of male vulnerability that seems apt for today’s intermittently androgynous approach to menswear. Of course, brands attempted to capitalise on this, then and now. There’s the infamous 1992 Perry Ellis collection of elevated Grunge-styled threads and, more recently, the slew of flannel shirts, ripped jeans, and band T-shirts without fan association being offered by fast fashion and High Street retailers through luxury streetwear, like Fear of God. Although the core of the Grunge aesthetic never truly died, modern waves’ manufactured, deliberate approach frames it more through nostalgia than what it actually was – disillusioned and reactionary through the lens of practicality. 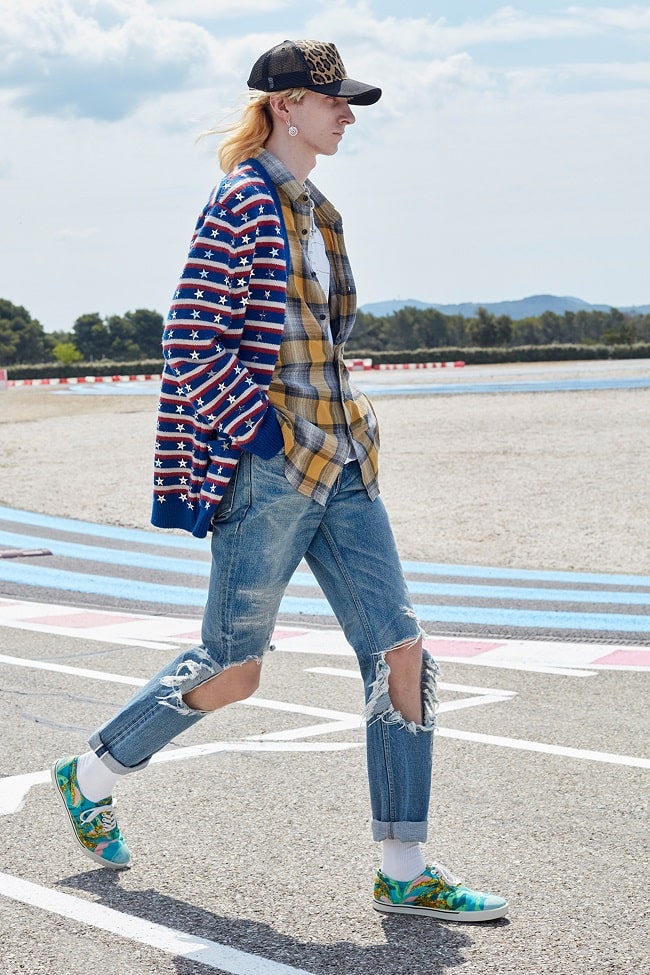 Denim: The cornerstone of modern Grunge style is denim. Previous revivals failed simply because “Grunge” was packaged as stretchy skinny jeans with rips perfectly cut across the material. This dilutes the fashion’s original essence – of being secondhand and so worn down, the knees are blown out. The return of dad and mom jeans more accurately captures the early to mid-‘90s silhouette; skinny jeans, rather, feel like a textured relic of the Hair Band era. As such, predictably steer away from something skintight toward a tapered or wider cut with a natural degree of wear, including around the hem and over the knees.

Wider Cuts: Ill-fitting in the early ‘90s meant you sported something designed for someone at least a size larger than you, with the shoulders and wrists drooping down and the overall form enveloping your frame. This applied to T-shirts and cardigans, as well as other knits and any military surplus styles. The key here – and perhaps reactionary to today’s precision of bespoke tailoring – is finding something freeing and loose without a sense of structure and, at the same time, delivering almost androgynous gender presentation. 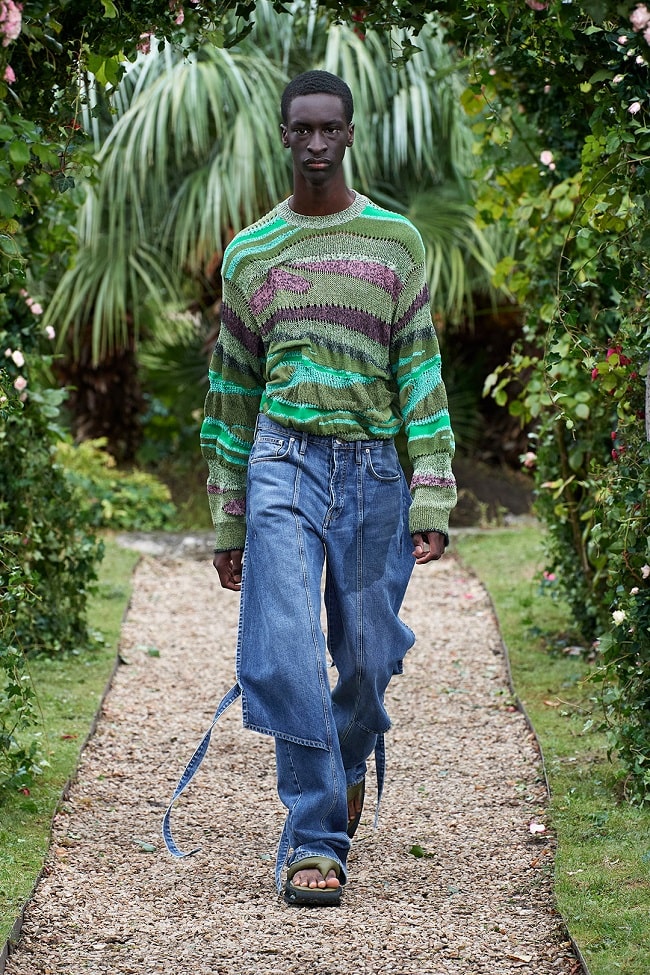 Graphic Tees: Grunge and skate culture overlapped in this area: Whatever T-shirt you sported was meant to make a statement. Today, this isn’t too hard to do, especially with parody fashion – another ‘90s staple – making a modest return a few years ago.

Flannel: Strictly thinking about casual fashion, flannel is the original overshirt. As menswear starts to get serious about technical fabric and construction, the flannel styles worn by loggers in the Pacific Northwest – and then coopted by everyone else – deliver techy without seeming futuristic. The thicker, softer cotton material is designed to trap body heat, turning it into a veritable layer under a denim or leather jacket or over a graphic T-shirt. 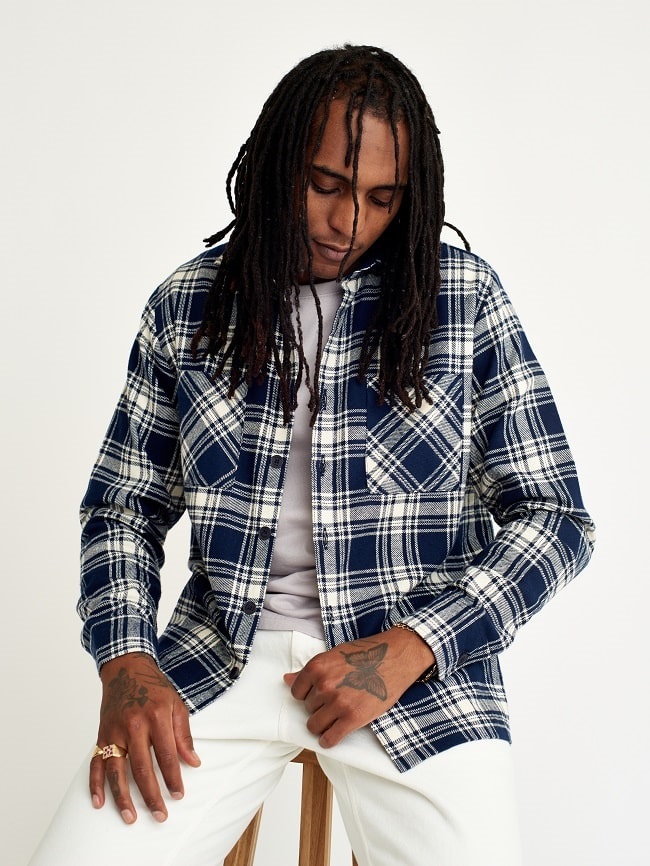 Knits: Yes, one of Kurt Cobain’s sweaters once sold for over $100,000. While today’s oversized luxury knits might tempt you in the same fashion, knit sweaters, cardigans, and beanies function in the same way flannel does – they’re practical warmth that just happens to be oversized. Knits of the era tended to feature contrasting horizontal stripes, a trend we’ve also noticed as of recent, thanks to renewed interest in unconventional stripes and nautical influences.