HOW TO TASTEFULLY WEAR LOGOS 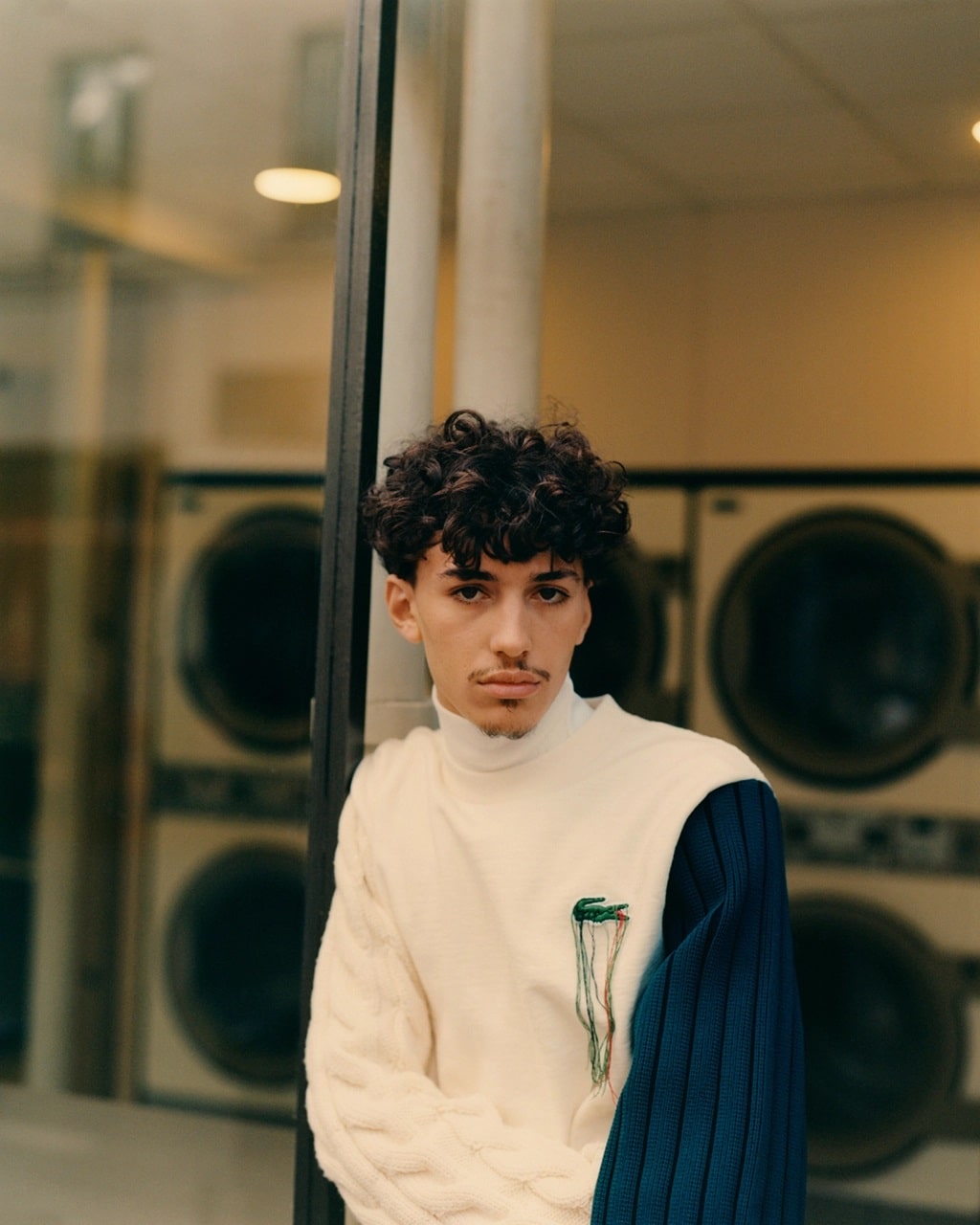 Anyone even moderately interested in fashion has debated the significance of logos. Gaining ground in the 1980s in response to the luxury fashion boom, surging toward the end of the 1990s, and now back again like clockwork, logos as a symbol can go one of two ways. On one side, they’re a clear grab for embodying wealth. As such, even top-tier brands add their logos to straightforward crewnecks and accessories for this purpose. The approach can come off tacky and cheap and often indicates the wearer doesn’t have a significantly discerning eye for style. On the other, as debate about fashion’s elitism grows, they represent accessibility. At face value, they’re a direct, if not crude, way of showing you’ve made it. Building from here, the emergence of parody logos sometime in the 1990s simultaneously balks at this convention while appropriating recognisable stylings for a DIY approach. The downside, however, is the increasing glut of knockoff fashions on unregulated marketplace platforms.

As a third and related factor, logos in their present state appeal to the masses – specifically Instagram, Pinterest, and any other social media platform where users might want to see what a style influencer is wearing. A logo eliminates having to do research – for instance, checking out the past few seasons of Fashion Week presentations to determine if that’s really Gucci or Balenciaga. A logo says it all succinctly and without pretences. Unless you’re talking about a small stitched emblem on the corner of a shirt, generally logos are hard to miss. In turn, whether you’re striving for some late 1990s sportswear inspiration or you’re trying out the present version of the trend, it’s easy to introduce too much at once. To approach logo graphics and prints more tastefully, here’s how you can get started: 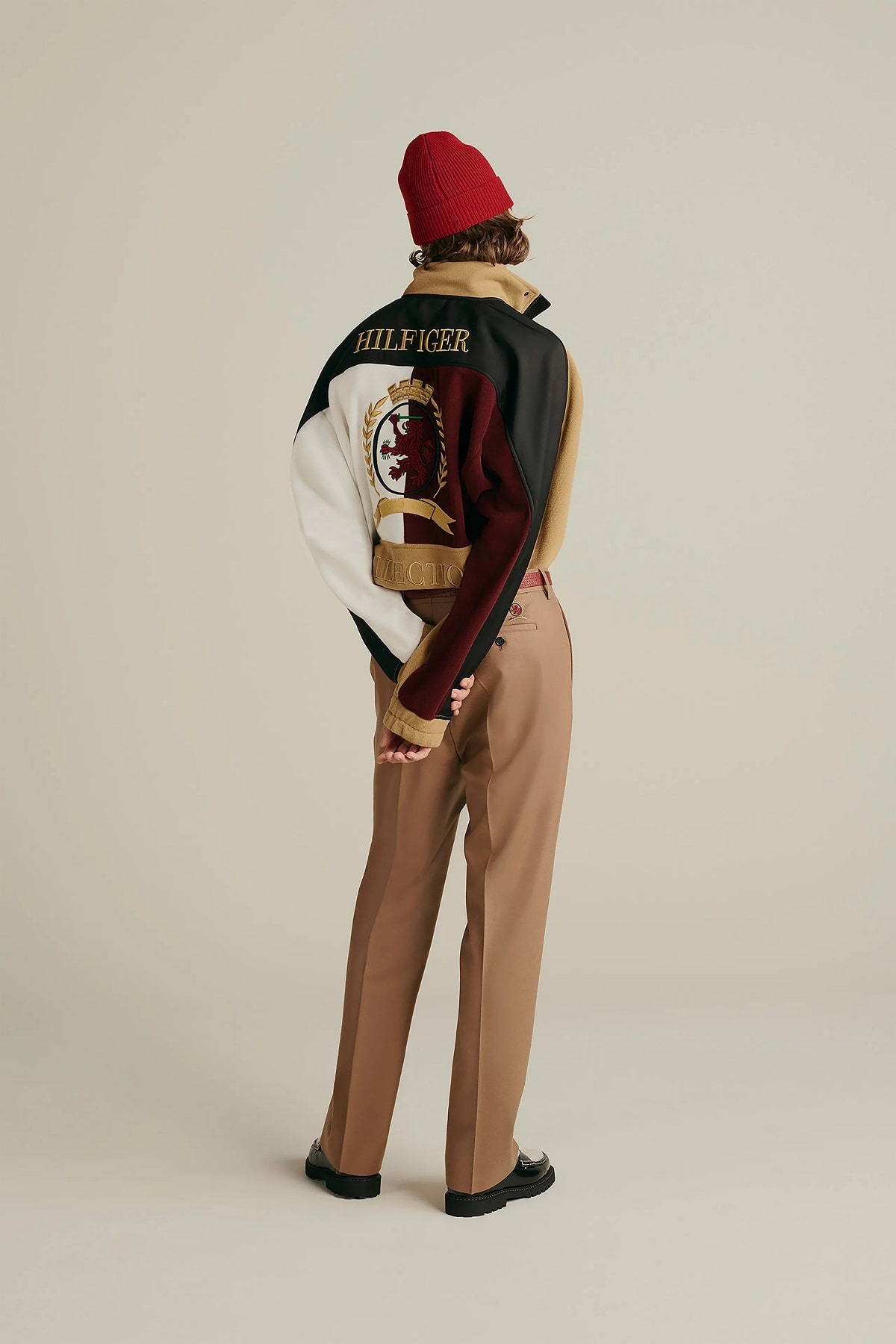 Luxury fashion has been around for decades, as have logos. Yet, the 1980s represented a confluence of these factors. As fashion houses like Gucci, Givenchy, and Versace saw their profiles rise, Ralph Lauren embodied ubiquitous prep fashion, and Calvin Klein jeans stood out with a distinctive logo patch, licensed merchandise took off. You can see the failures of this in Netflix’s Halston series, but to put it straightforwardly, higher-end brands began introducing mid- and lower-tier items that took advantage of the luxury craze. Generally, this meant T-shirts and accessories of middling quality with a logo and department store fragrances. By the 1990s, a few of these endeavours were branded and sold as separate lines. A trip to a mid-level department store might have yielded finds from D&G – the lower-tier Dolce & Gabbana line – or Versus by Versace. As well, outlet malls cropped up during this era to create the illusion of more affordable higher-end merchandise. Most of what was sold were branded items. While outlet malls still stand, these lower-tier lines were mostly folded into their respective parent brands sometime during the 2010s, and instead, exclusive collections for more price-conscious retailers – like Balmain for H&M or Missoni for Target – highlighted a fashion line’s more genuine stylings in another accessible format. At the same time, branded luxury fragrances, including for both men and women, consider quality while offering an overall more reasonably priced product. Into the 2020s, a resurgence of late 1990s and early 2000s styles is to be expected – now dubbed “Y2K” or “indie sleaze,” based on the period of inspiration. The revival has renewed interest in preppy threads and explored how sportswear – from Champion sweatshirts to the recognisable Polo Bear logo – represented an accessible version of luxury. This view intersects with streetwear’s classic design: something simple, comfortable, and inspired by skate wear or hip-hop culture with a logo to illustrate brand recognition. Today, a logo not only symbolises reaching for and holding onto luxury but whether that’s a reworked preppy design in a nod to the 1990s or something streetwear centric, a la Supreme’s box logo. 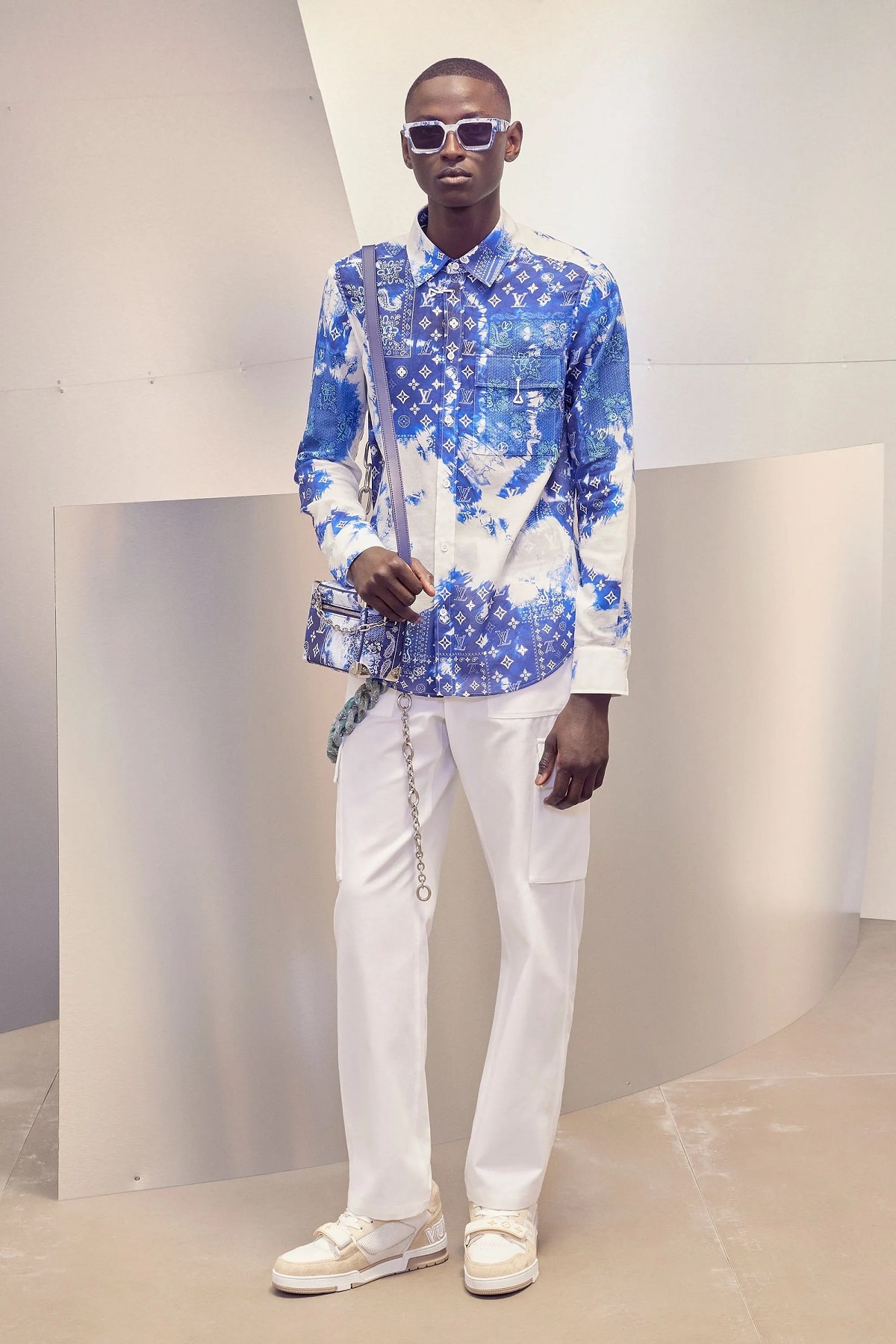 Wearing Logo Prints in the Present

Dip your toe into the water without falling in too deep:

Especially something all over like a Louis Vuitton or Gucci print, the eye is quickly drawn, and the combination is instantly recognisable. In this case, the material has the same impact as a statement print: Let it stand on its own and avoid clashes with any print or pattern of a similar intensity. On this note, avoid combining multiple logo prints, as, branding aside, they appear to compete with each other.

On one end of logo mania, you have Louis Vuitton and Supreme’s ultra-bold 2017 offering that combines repetitive branding with bright red. On the other, there’s the stitched Lacoste crocodile or Ralph Lauren polo player. This isn’t to play classic prep against streetwear, but instead, to think about scale. Subtle, where logos are concerned, lets the branded graphic take a secondary role and disappear into the background. There are a couple of approaches. One, as already mentioned, look for a singular logo in a smaller size, ideally in a location that doesn’t immediately draw the eye. Secondly, logo prints in a muted or tonal colourway deliver a similarly disappearing quality that doesn’t immediately jump out.

With prints and graphic-based pieces, it’s generally recommended that you put your loudest pieces on the inside, and something more neutral on top. This doesn’t change for logos. Instead, make your base garment something with a box-style logo or all-over print, and add a bomber, blazer, or other layer in a solid, cooler-tone shade on top to take some of the edge off. On this note, too, relegate the logo to an accessory that accents a relatively classic ensemble.

Go back to basics. Perhaps the most accessible and traditional form of logomania, athleisure frames this trend with familiarity, be it 1990s sportswear or comfortable gym class digs. Here, too, you can still do too much: Rather than pairing your Nike shorts with a Champion sweatshirt, opt for something logo-based on top with more neutral and secondary-feeling joggers.

Why take this trend so seriously? If you’re against the idea of looking like a billboard or broadcasting a false sense of wealth, upend it with a parody graphic designed as both a play on words and a social statement. It gets a few double takes and, if you’re into that sort of thing, pays homage to a streetwear technique designed to intentionally subvert the mainstream. 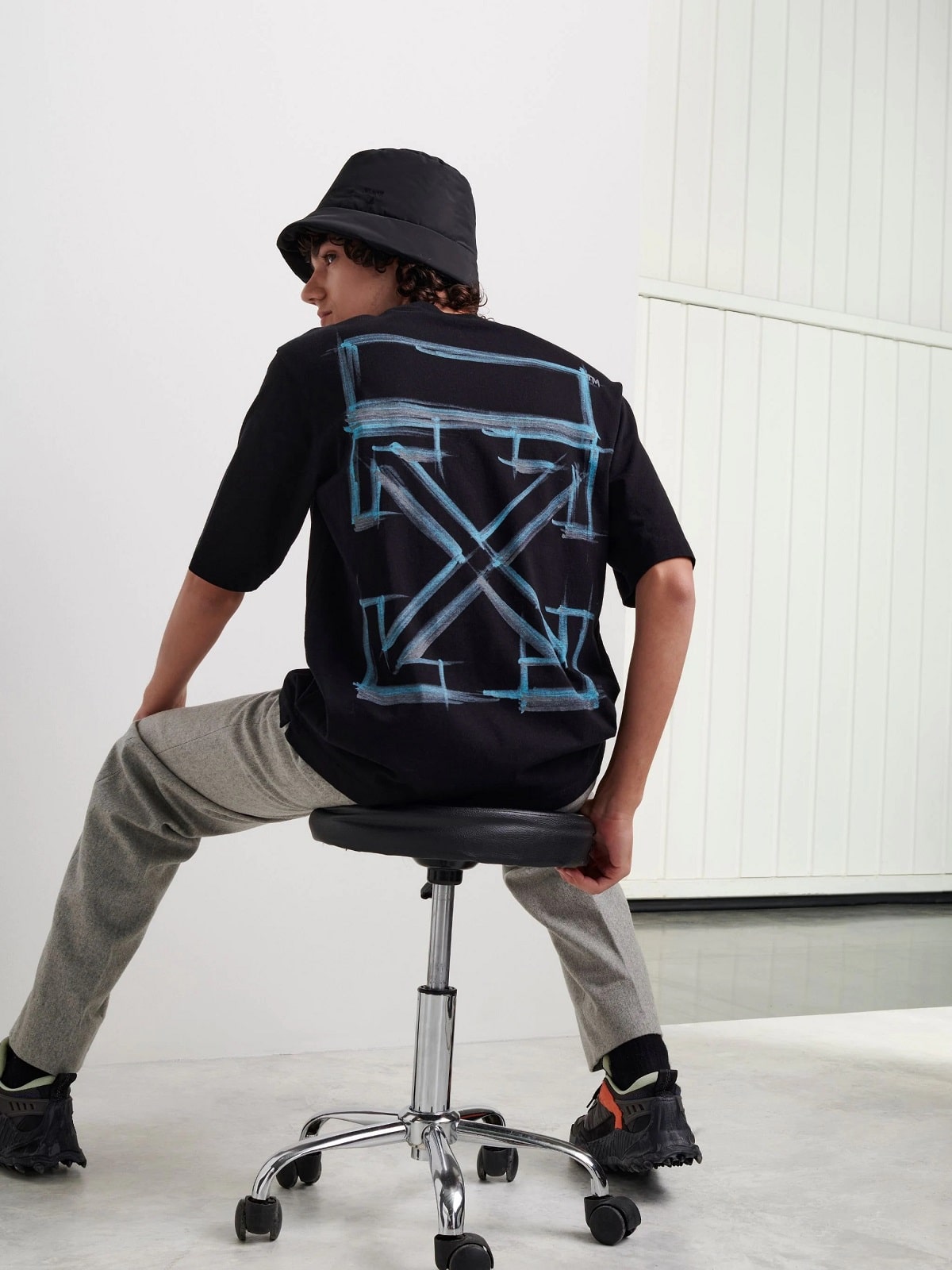