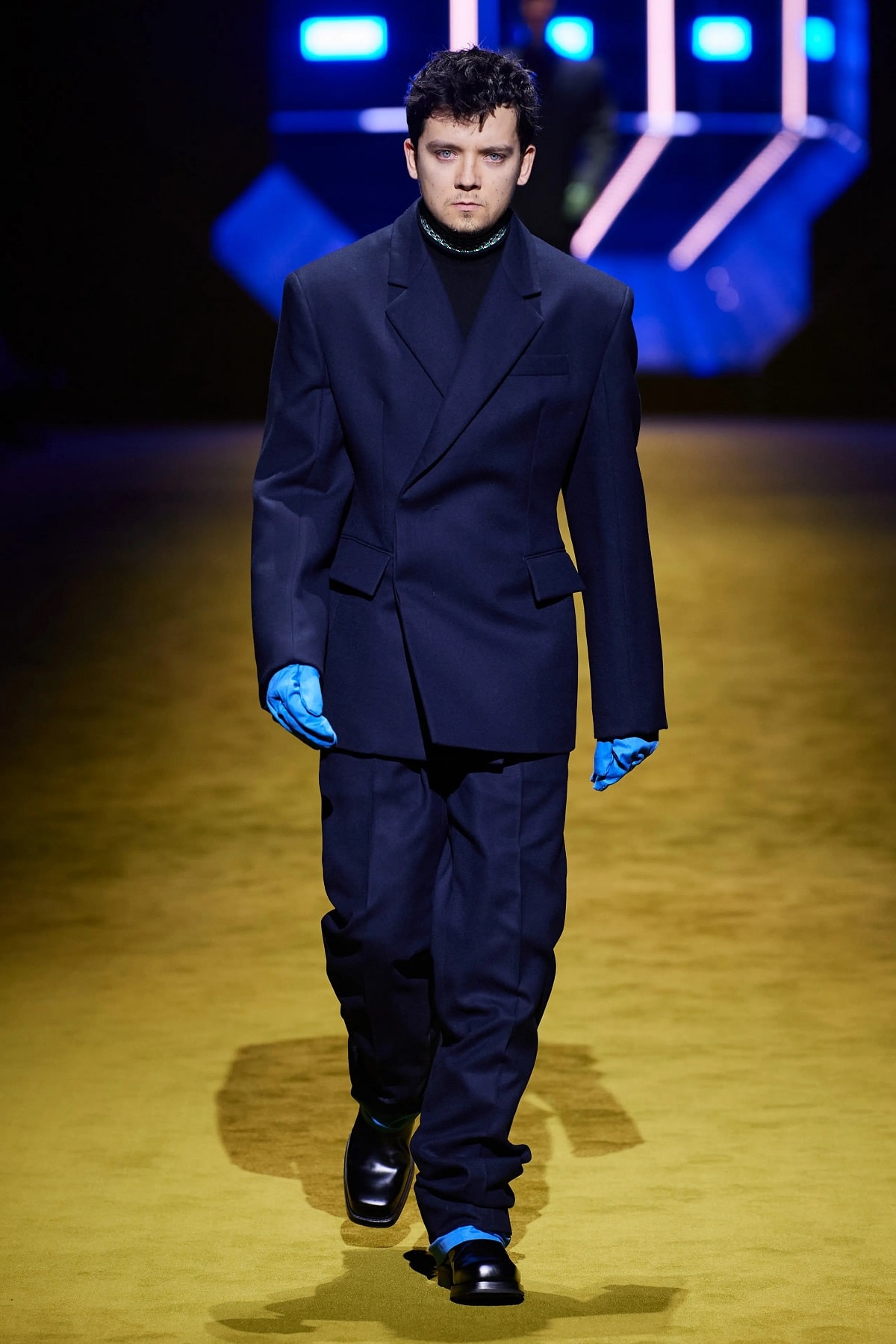 You’ve heard this assertion at least once over the past two years: The mass shift to working from home has negatively impacted the suiting industry, from Savile Row tailors to department stores and other off-the-rack brands. While it’s not wrong, it’s just one part of a picture: The subtle yet pervasive cultural shift surrounding the pandemic has made many more socially cautious – in a “Do I really need to go to that event?” way – and has broken down trends. Right now, menswear has been rehashing the 1950s, 1970s, and 1990s simultaneously, seems more invested in vintage dressing and sustainability, yet hasn’t fully dropped the hype culture of our pre-2020 world. Along with all this, that whole tailoring 2.0 trend morphed into a love affair with 1980s-esque suiting – the bigger the cut and shoulders, the better, with some pastels and embellishments thrown in. Looking at the red carpet is essentially an amalgamation of Prince, Duran Duran, and David Byrne music videos.

Yet, the notion that suiting has met its death knell persists. The most significant development comes from the Office of National Statistics (ONS), which made the decision to remove suiting from the list of 733 product categories used to calculate the UK’s inflation rate and cost of living. Replacing it – and more accurately reflecting present smart-casual norms – is the blazer or suit jacket. For reference, suiting has been on the ONS’s list since 1947. 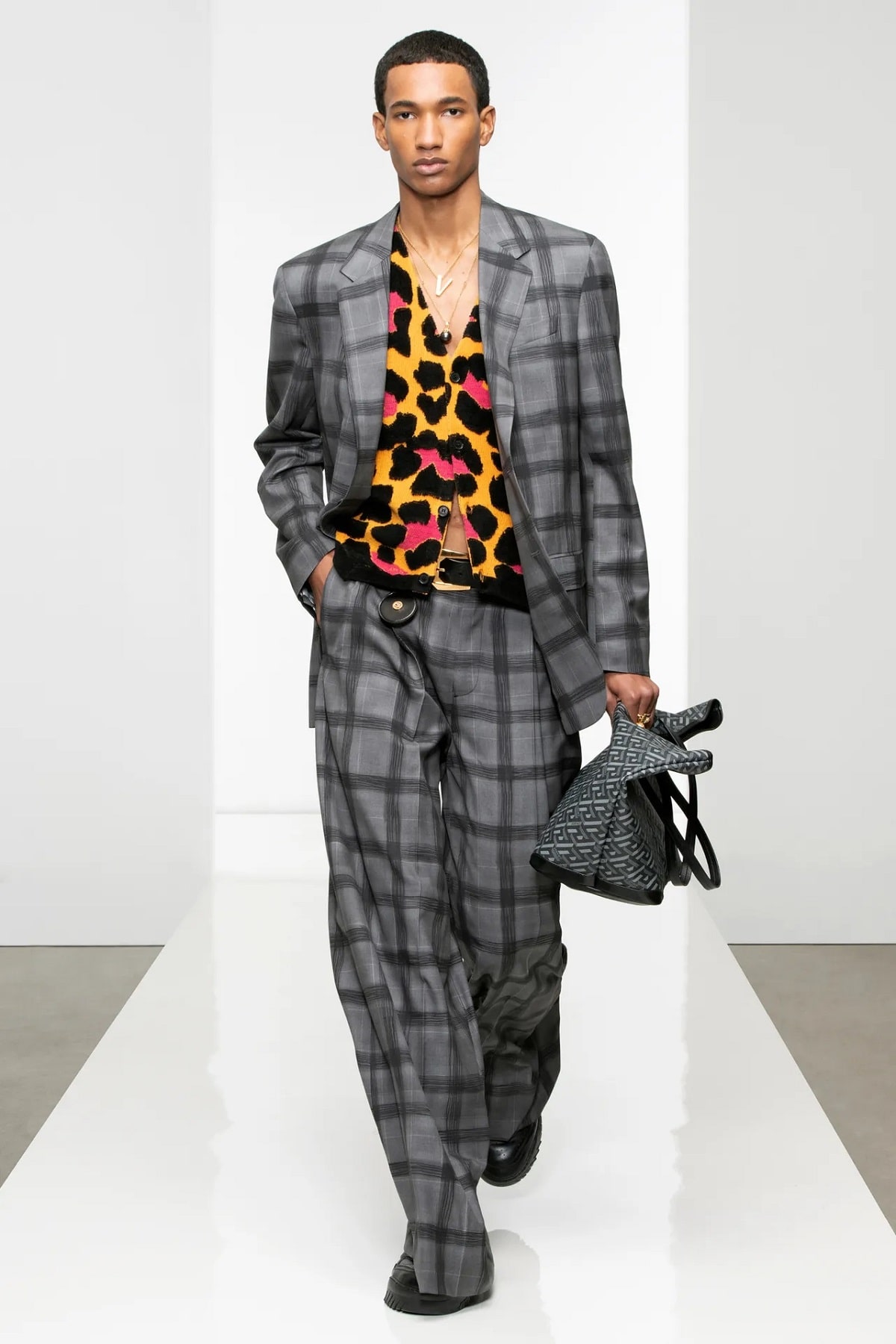 Through a narrow perspective, this change means that suiting, through a more classic perception, is less relevant than it used to be. On the other, suiting’s decades-long cultural descent started with casual Fridays in the 1990s, continued falling through late 2000s tech bro culture, and declined into additional irrelevance with finance firms like Goldman Sachs updating their dress code in a more casual direction. On the other, suiting isn’t dead: While your father’s navy and charcoal digs appear to be fading as an in-office staple, suits have finally caught the wave that’s influenced much of menswear since the early 2010s – specifically, any garment serves as a canvas that can be tweaked or overhauled in various configurations.

Behind the ‘Suiting is Dead’ Argument

Statistics support this assertion: Reported in The Guardian, data from Kantar Worldpanel shows that UK sales of men’s suiting decreased from £460m in 2017 to £157m in 2020 – a predictable decline considering the sudden societal shift the Covid-19 pandemic brought about. In line with expectations, sales jumped up slightly to £279m in 2021 – also indicative of the trickle-back-to-the-office migration that started last year. 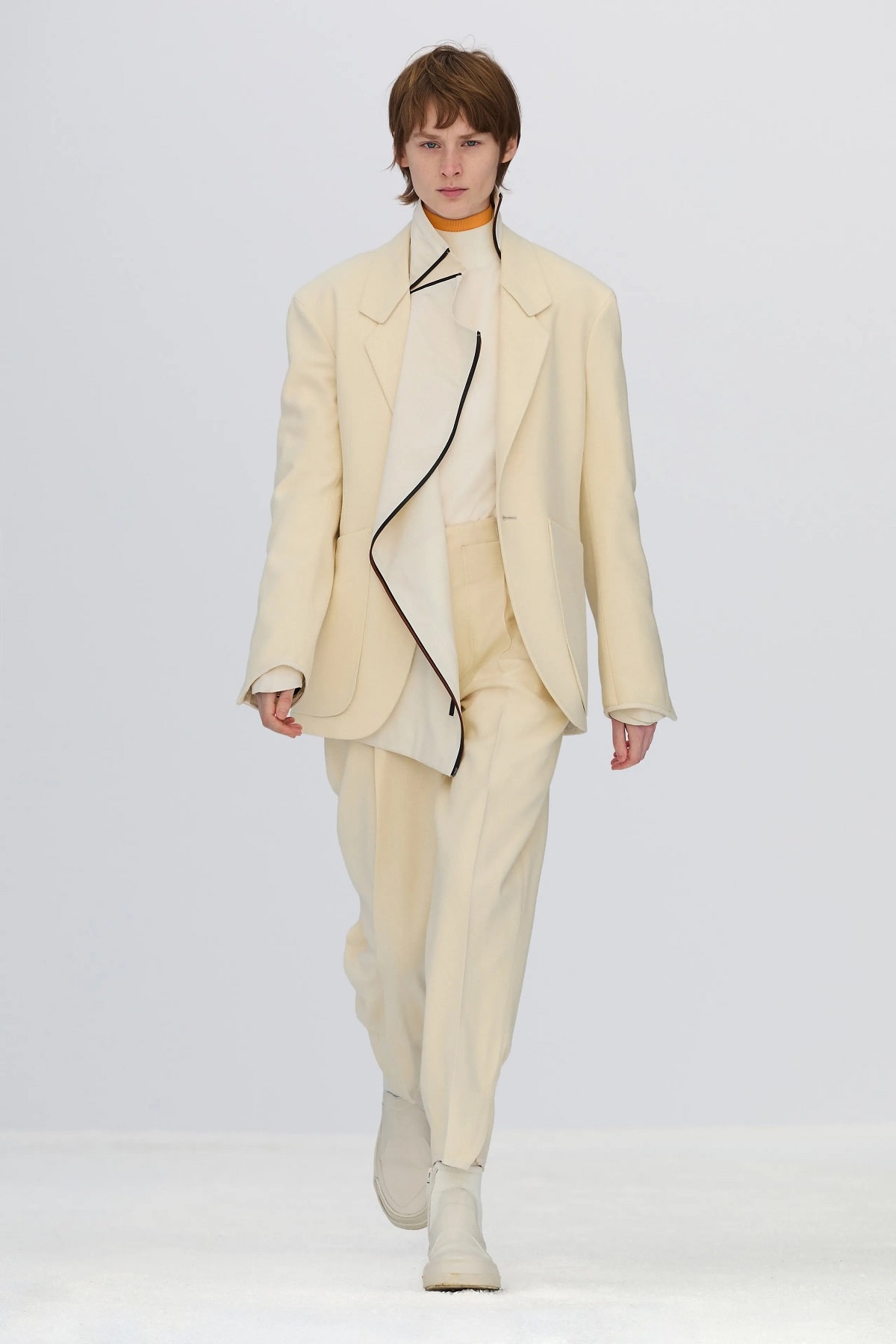 Nevertheless, the glaring blind spot in the whole “Why is suiting dying?” concern is that dressing as a whole has become more casual. Yes, for the majority of the 20th century, a decently dressed man wore a suit out in public: Depression Era photos of breadlines in the US and, a decade later, baseball games painted this garment, preferably in charcoal wool or flannel, as the de-facto uniform of acceptable masculinity. But, by the 1950s, casual clothing exploded, ushering in an era of shorts and double-notch flat-collar shirts, and by the 1960s, dress hats fell out of favour. Suiting losing its visual and financial presence simply falls in line with a trajectory that veered toward leisure suits with wider lapels by the 1970s and formal-except-for-Fridays in the 1990s. How often and when we wear suits has further adjusted with this shift. Forbes points out that even in the 1950s, a man wore a suit for roughly two years – granted, it was an everyday garment at that time, especially if you worked in a white-collar occupation. Closer to our present, we not only expect a suit to last longer, but the garment comes with power associations: Either you’re the one in charge, or you’re in a more submissive, favour-seeking position striving to impress. As such, the suit as an everyday garment thrived – and primarily continues to live in – more buttoned-up, conservative industries like finance, banking, and law. The rest of us tend to trot it out for job interviews, weddings, funerals, and rare cocktail to black-tie events that sharply decreased in frequency with the pandemic. 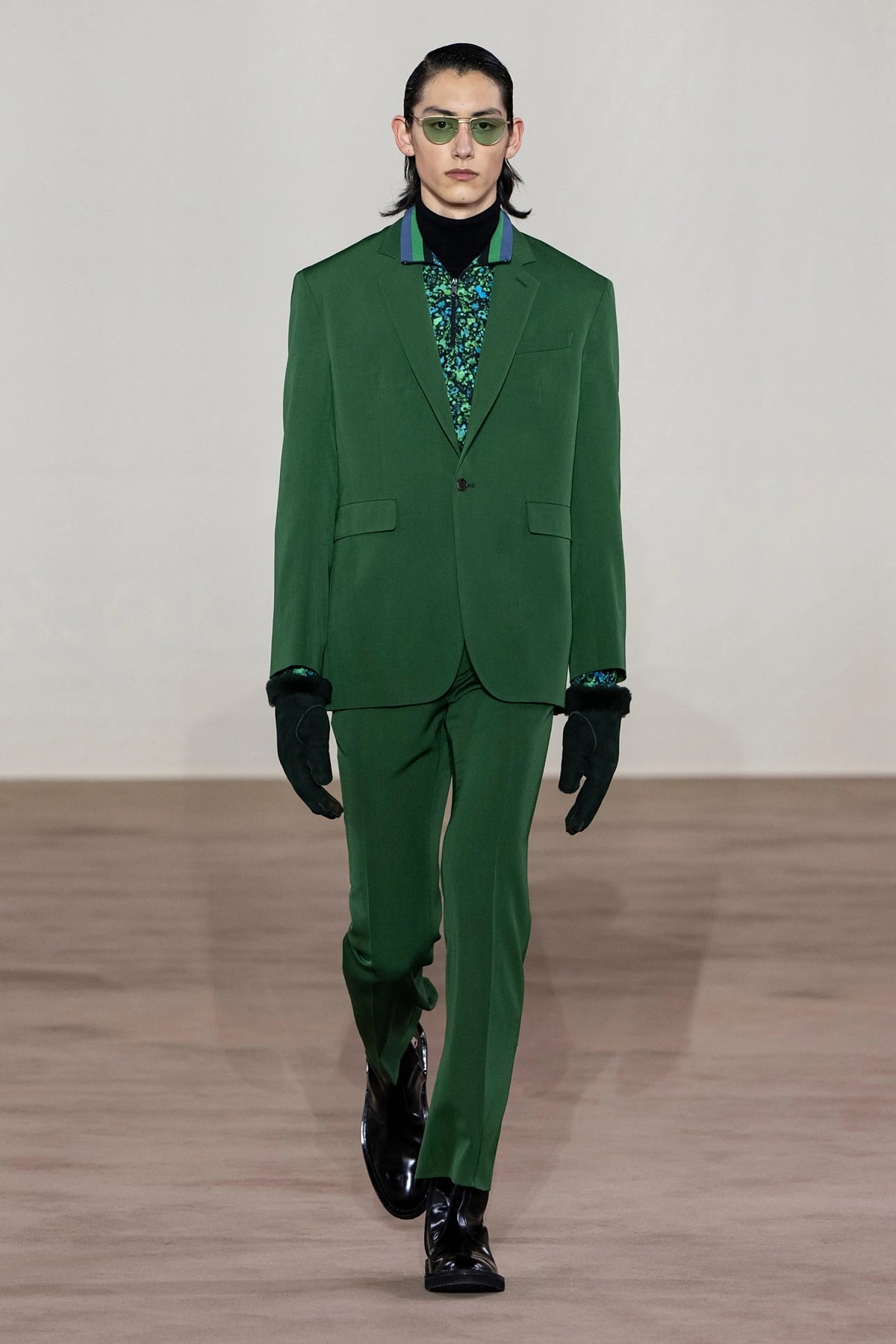 Going back to the pandemic, the rapid shift in work environments required equally swift adjustments that haven’t quite bounced back. Tailoring remains a primarily in-person industry: Some can be done online – see the rise in online made-to-measure services like Knot Standard, Indochino, and Hockerty – but the traditional Savile Row model that doesn’t involve an algorithm and multiple back-and-forth mailings has gotten lost, save for shops that have readily accessible information on a customer. The result, predictably, has been a decrease in traditional suit tailoring and growing interest in online-fueled customization. Then, certain subsects of menswear saw a surge during the pandemic: Comfort-centric clothing was one, helmed initially by athleisure and later drifting more toward polo shirts and drawstring trousers. Secondarily, consumers began seeing the durability and practicality of classic workwear – particularly chore coats, trousers with more pockets, and, come winter, materials like flannel. As a confluence of these factors, menswear in the present has taken on a scattered, anything-goes character. For the office, anything from suit separates to a designer hoodie over a polo is passable.

Why Suiting is Evolving

Trends intentionally defy static expectations by their ever-evolving nature. Of course, as we enter a period of micro-trends or where everything and nothing is simultaneously trendy, suiting exists on a macro level. Yet, even stalwarts change. Reported by Forbes, suiting for 2022 continues to shed its formal-only connotations and, instead, travels with what consumers are interested in: Searches for suiting increased roughly 600 percent this year, spurred partially by the three-piece ensembles spotted in Bridgerton. 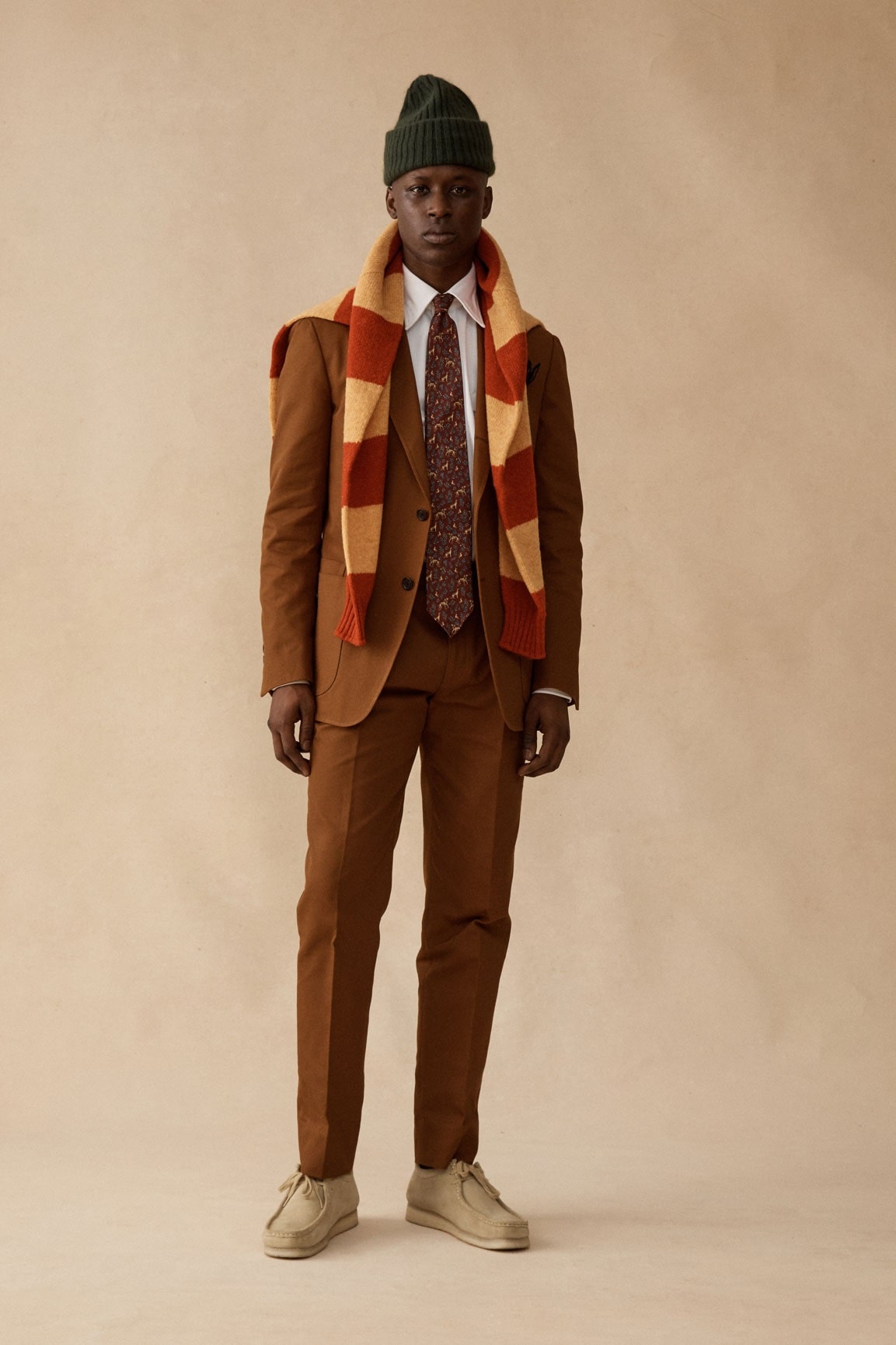 At the same time, the style script for menswear has started to flip: We seek to get our T-shirts, jeans, and even athleisure tailored while viewing the suit as more of a fashion item. This aspect materialises, predictably, as some 2019-era maximalism: bright neon to pastel hues, broad, padded shoulders, and wider-cut, almost cartoonish silhouettes. We’ve spotted this amalgamation in Fashion Week presentations for roughly the past three years – the Dior Men’s SS23 collection represents its almost caricature-like apex – and shows no signs of abating, especially in relation to menswear on the red carpet. From here, the suit has transformed into a canvas that defies expectations and rules. Dress-inspired silhouettes? Already done. No shirt? Been there and tried it with a harness. Bejeweled, textured, or printed? That’s somewhat tame. Taking it to the next level, footwear reflects these exaggerations through block soles and wider silhouettes. If it hasn’t already dawned on you, the Thom Browne, Hedi Slimane era of skinny tailoring and dark hues along with a fitted white button-down has met its twilight. These developments, of course, are only natural: Ordinarily, suiting gets reworked every decade or so but started slowing down with business casual dress codes. At the same time, the definition of masculinity and what it means to be a man evolves and ebbs and flows with regularity – not so much toward androgyny or full-on femininity but out of the confines of western-prescribed cultural restrictions. Suits in their traditional form symbolize the white, middle-class man’s world of the 1950s that eventually heralded in the greed-is-good attitudes of the 1980s. Yet, as many realise trickle-down economics results in a more stratified society, they’re simultaneously acknowledging that “classic” masculinity fits like a vise and leaves little room for personal expression. It isn’t so much an attitude of “What happened to men?” as many American conservatives proclaimed when Harry Styles wore a dress on the cover of Vogue last year, but that masculinity can look and feel differently and more individualistic. 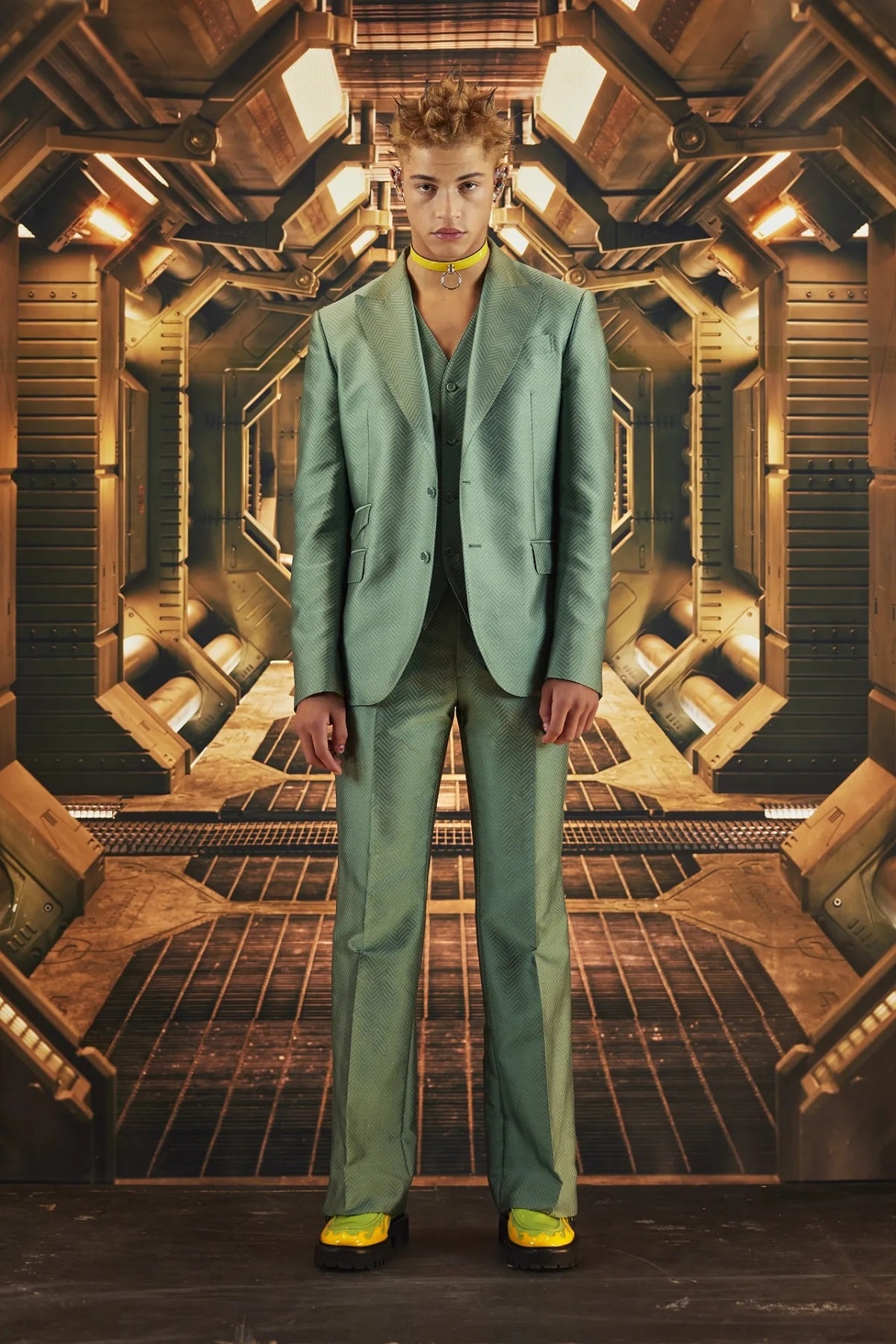 We’re in an era of rule-breaking that’s simultaneously retro yet forward-looking. Conventions mean little except to establish a template. Charcoal and navy aren’t so much replaced but get joined by bottle green, purple, burgundy, and any pastel you can think of – and that’s for something tame. Disco-era wide lapels and flared trousers have returned, as have 1980s shoulder pads, yet we pair them with a 1950s-esque double-notch collar shirt and a pair of dress sneakers or Cuban heels. It all gives off a “raided the thrift store” vibe that’s casual, avant-garde, and unexpected. Beyond the Fashion Week and red carpet aspirations, we expect everything to be custom – fit and fabric. Off-the-rack looks and feels cheap, and we know something better is out there. We also want to do it on the go – stepping into a store shouldn’t be necessary – and we want the elements making up the suit to integrate seamlessly with the rest of our wardrobes. No more funeral-job interview-wedding ensemble, but something you can pair with polo or shirt for a more polished yet unpretentious presentation.